During our short stop in Vietnam, we booked an overnight cruise which would takes us through the scattered limestone islets of Ha Long Bay. Truth be told, Ha Long Bay was probably the main reason of our visit to Vietnam. Although we enjoyed the chaotic streets of Hanoi, the 1600 islands and islets in the Gulf of Tonkin had been a dream destination for quite some time.

After some research, we booked our little trip to heaven on the Red Dragon Junk. After a couple of incidents at sea in previous years, the amount of time we would spend on a boat was ardently discussed. We carefully weighed our lust for adventure versus our fear of all that could go wrong at sea. Finally, adventure won and we decided to travel Ha Long Bay for 2 days and 1 night. 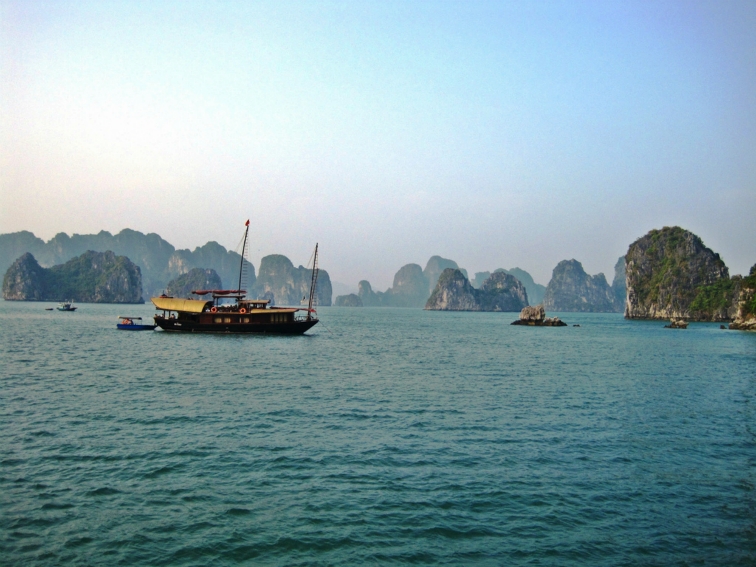 We would be picked up by a shuttle bus in front of our hotel. It was 8am when we lifted our bags and entered the compact van. The trip from Hanoi to Ha Long Bay took approximately 4 hours. The traffic madness of Hanoi was left behind, but never entirely replaced by quiet roads. In Vietnam, like in most of Southeast Asia, driving takes on levels of an extreme sport. Thankfully, our driver was conscientious and managed to deliver us to the wonders of Ha Long Bay in one piece.

After a few minutes waiting by the Hon Gai International harbor, where junks of various shapes and sizes proliferated like profiteroles at a French wedding, we were led to our boat, joining the other 6 guests. Pleasantries were exchanged and we all soon settled into what would be home for the next 2 days. The weather was so far ambiguously hazy.

The Red Dragon Junk looked sturdy. It was a small boat compared to some we had seen back at the harbor, but at first glance we enjoyed its solid intimacy. Also, at 25 meters, “small” is perhaps a misnomer. The predefined itinerary would take us further into the waters of Ha Long Bay than a regular one day cruise. During the cruise briefing, there was mention of a cave, kayaking, an overnight stay on board and a visit to a fishing village. We tried to look excited and carefree but, at least at first, the dreaded night’s sleep in a secluded bay was all we could think about. 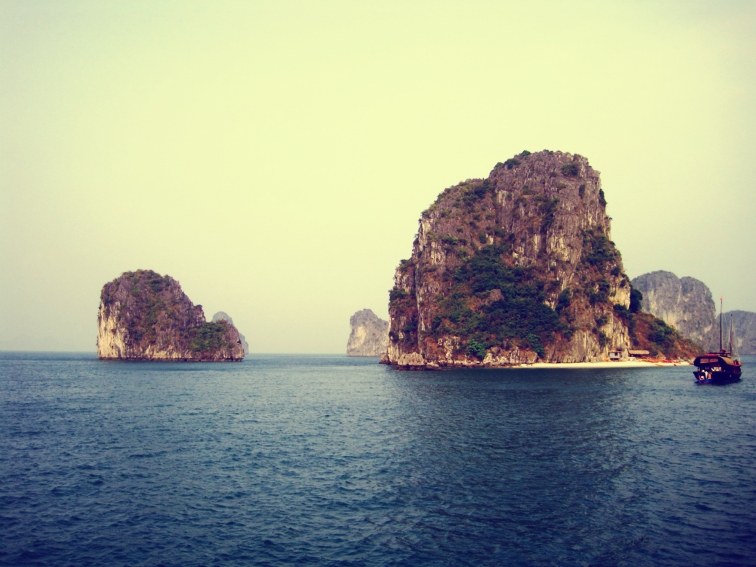 However, as we set sail and the majestic limestone pillars began to line up along the horizon, all worries were momentarily forgotten. The morning haze was lifting, the skies were descending blue, a soft breeze was blowing, the waters were calm, and we were mesmerized by the stunning scenery around us. Ha Long Bay is truly a magnificent natural world. Recognized by UNESCO as a site with outstanding universal value, it has entranced travelers for thousands of years. As for us, we immediately fell under its spell.

We had lunch at Bai Tu Long Bay. Lulled by the gentle splash of the waves, we enjoyed our meal while chatting with the other guests for the first time. Everybody seemed to be in high spirits. The crew was friendly and accommodating. We were mostly left to our own devices, appreciating the glorious views on deck and basically lounging about without a care in the world.

After exploring the innards of the Thien Canh Son Cave, thus making it our first excursion off the boat, we left for Hon Co Island, where we swam for a while and went on a short kayak expedition around the island. It was my first kayaking experience and I must admit to have enjoyed it immensely. More, please.

As the long, lazy day began to dwindle, we returned to the boat. Dinner was served, conversations were resumed, and the good times kept flowing. The food was delicious. The crew made elaborate concoctions, and were particularly creative in providing us with non-meat dishes. As night descended and plates were emptied, we slowly strolled along the empty deck, gazing into a spellbinding landscape straight out of a fantasy world. 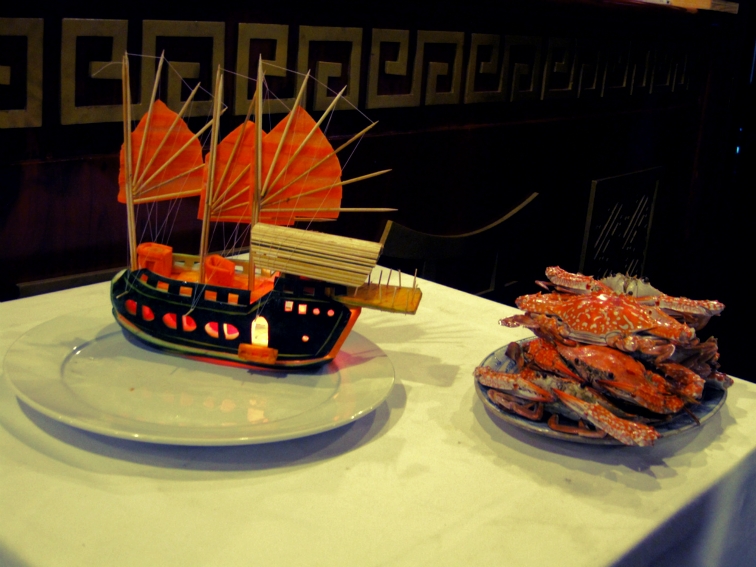 The luscious contours of the drowned limestone karsts eventually dimmed to a crepuscular blur, until there was nothing but ghosts rising from the sea. We sat silent and softly swaying, listening to wood creak. In the short distance, the light of another anchored boat gave a spectral luminescence to our surroundings. Late-night laughter echoed through the shadow mountains, filling the gap between water and darkness. It was a space of childhood dreams, of unfettered imagination, of lost phantoms and endless driftwood. Even as we stood there blinking, I knew I would never forget that night’s misty whispers…

As we prepared for slumber, our thoughts turned to the horror stories of boats swallowed by the sea in the middle of the night. One such incident had recently occurred in Ha Long Bay, which did not help in easing our apprehension. However, our boat inspired confidence. The room was comfortable, the waxed wood seemed to be holding up nicely, the private bathroom was surprisingly commendable and our porthole gave us at least the illusion of early warning.

In the end, we slept soundly. What, us worry? Nah… The following morning, breakfast was savored in the dinning room. The weather had turned dewy, but we were still in one of the most gorgeous places on Earth. Next in our itinerary was a visit to the Vung Vieng floating village. We left the Red Dragon Junk and were soon arranged a trip on a small rowing boat. Impelled by the strong arms of a distinctly charming woman, we crossed the peaceful waters sporting wide grins. Vung Vieng is a floating village, safely nestled between the limestone columns and almost entirely unaffected by the whims of wind and ocean alike. The community lives in close coexistence with the sea, and although tourists like us remain a constant presence, they still retain aspects of an ancient way of life. Our rowboat lady in Vung Vieng

We were back in the harbor around noon. As we waited for our shuttle bus to arrive and take us back to the hustle and bustle of Hanoi, we gazed once more at the multitude of boats scattered in the horizon. Our wondrous journey was over. The limestone chimeras were now another thread in our patchwork memories, but one embroidered with the vibrant colors of daydreams. As we drove through rain and heavy traffic, I realized that, amidst all the beauty we saw, the most precious gift I would carry would be the smooth recollection of a night spent with ghosts.