Time and Travel in Tunisia

Albeit part of the immense African continent, Tunisia is first and foremost a country of the Maghreb. Bathed by the Mediterranean Sea, its culture and history are deeply connected to its waters. From its Berber origins to the rise of the empire of Carthage, and later from the Roman invasion to its conquest by Arab Muslims, the Mediterranean Sea has helped shape not only the borders but also the soul of Tunisia. After being ruled by the Ottomans and the French, Tunisia finally achieved independence in 1956. However, it was only in 2011 that it finally held free elections.

We visited Tunisia a couple of years before the overthrow of autocratic President Zine El Abidine Ben Ali. It was our first foray into Africa, and it would lead to later excursions to Egypt and the luscious heart of Tanzania. 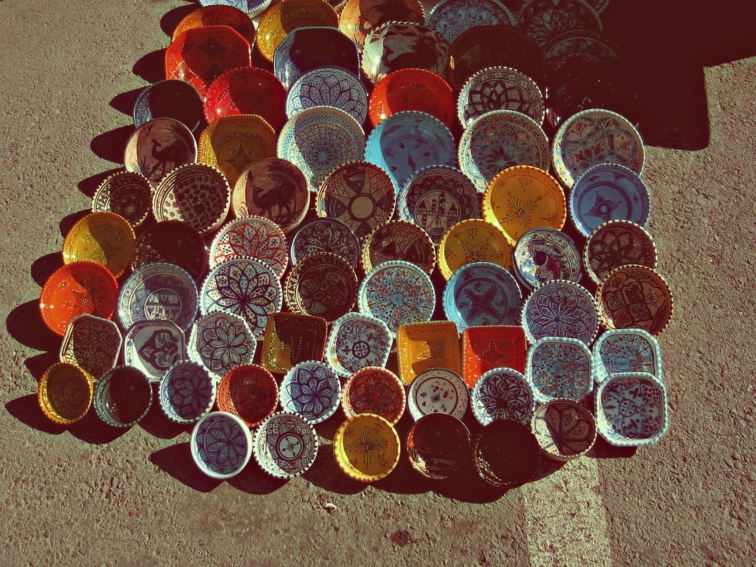 Tunis has been a mercantile epicenter for many centuries. Its magnanimous past can still be glimpsed in the sinuous alleys of the Medina. Strolling the Av. Habib Bourguiba, and once free of touts, it is easy to surrender to the old-world charm of Tunis.

The Bab El Bahr stone-arch was our gateway to exploring the souk. Myriad textures, smells and colors abound in its labyrinthine streets. In some of its quarters it is possible to ascend to several terraces providing a fascinating view of the city. In the Medina there is not much mix of old and new, but rather of old and ancient. 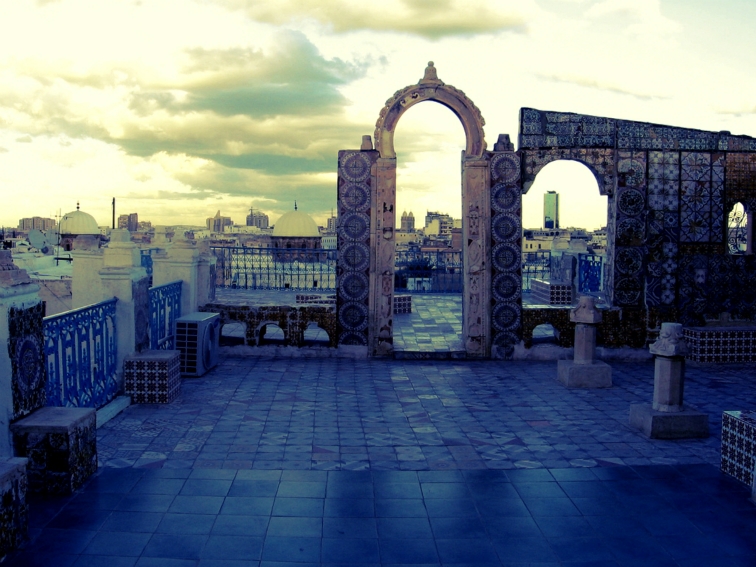 View above the souk in Tunis

Although Arabic is the official language, French is still somewhat widely used and understood. A good advice would be to practice a few French phrases, since they might come in handy while lost in the souk and fending off unofficial “guides”.

Leaving Tunis is a good opportunity to experience some of the contrasts of the Maghreb. Since we were only planning to travel relatively short distances, we chose to ride the quaint TGM light rail line. We used it to visit the Bardo Museum, not far from Tunis. It displays impressive Roman mosaics, depicting numerous scenes of Roman life, varying from the mundane to the mythological.

Going further, far from the chaos of the Medina and past the port of La Goulette lies the picturesque city of Sidi Bou Said. It is best visited in the early morning, before the sun burns too brightly and the tourist hordes invade its cobblestone streets. 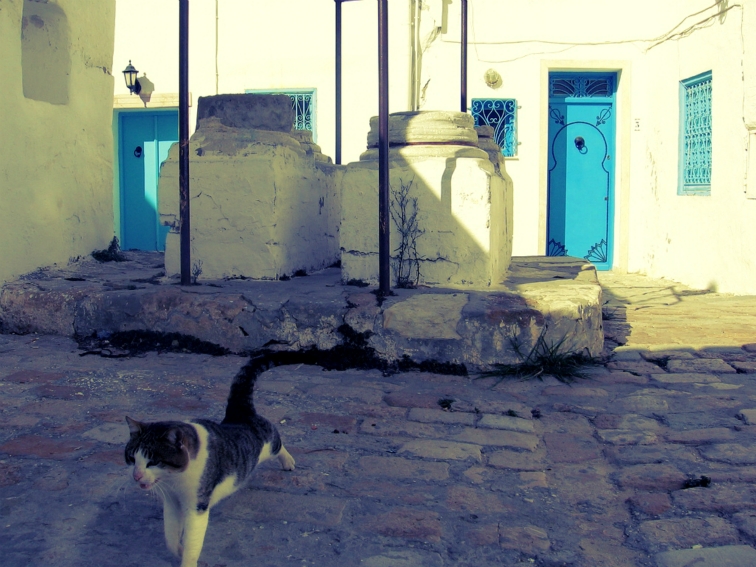 A cat stretches in the shade of Sidi Bou Said

The main draw of Sidi Bou Said is the photogenic allure of its buildings: all immaculate white, with blue windows and rooftops. It also has great panoramas of the surrounding bay. Descending to the water, it is striking to notice the vivid orange of the rugged hills contrast with the shimmering blue of the sea.

Here is the nature of the Maghreb: stuck between the desert and the sea, a space where sustained growth has been unable to bloom. On the way back from Sidi Bou Said, a stopover at Carthage is in order. This ancient Phoenician colony and nexus of a trading empire is nowadays an area favored by some of the most affluent Tunisians. What remains of its tremendous history is mostly scattered ruins. However, its archaeological site is on the UNESCO World Heritage List and is worthy of a visit. 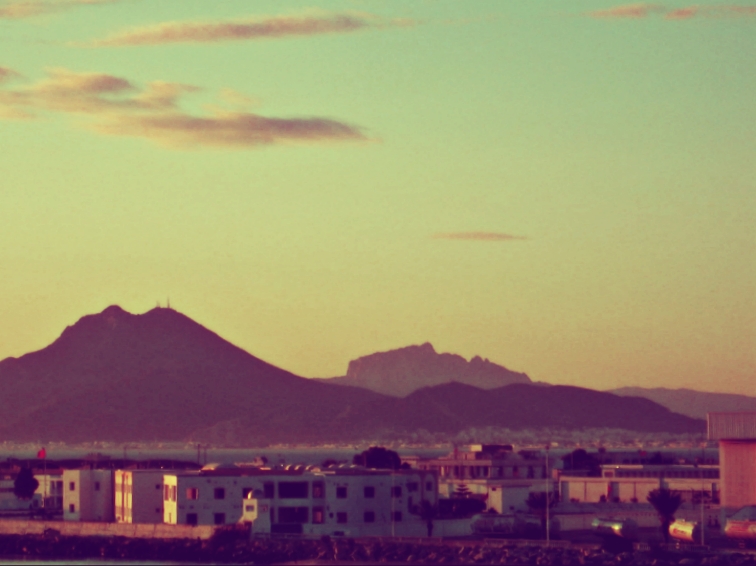 Our longest journey in Tunisia took us to El Jem. It is renowned mostly for the imposing remains of its Roman Amphitheater, also a UNESCO World Heritage site and modeled on the infinitely more famous Coliseum of Rome.

El Jem is today a tiny village, but wandering through the exceptionally well preserved colosseum (the largest in North Africa, and second biggest in the Roman Empire) we were reminded of the outstanding grandeur of the Roman Empire. Incredible as it may seem, what is now dusty El Jem was once Thysdrus, a prosperous Roman city. 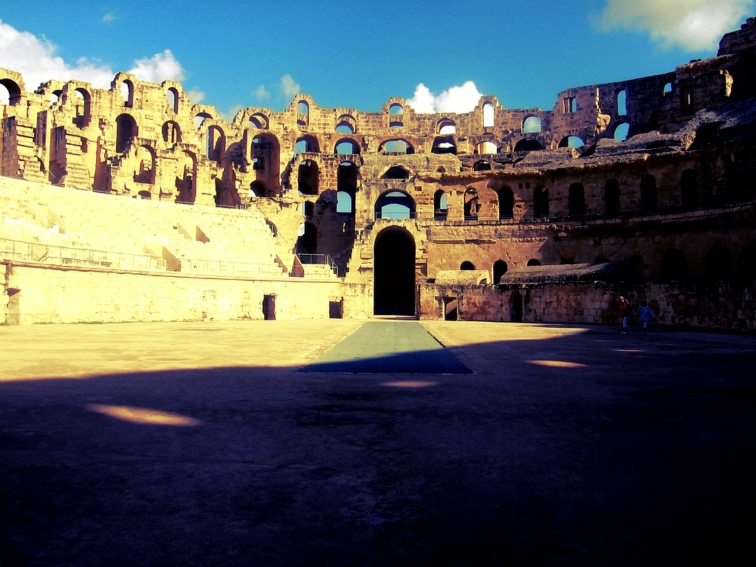 The remarkable Amphitheater of El Jem

After centuries of Roman dominion and years of Ottoman and then French rule, the Tunisia we saw was still very much locked in its past. Its present is currently up for grabs, since its status as a young democracy in a notoriously volatile region gives it a sense of fragility and insecurity.

Even if the beach resorts of Sousse, Djerba or Hammmet continue very much open to European sun-worshipers, we look forward to a day when Tunisia will finally achieve its true independence – from the grips of its glorious and bloody past. 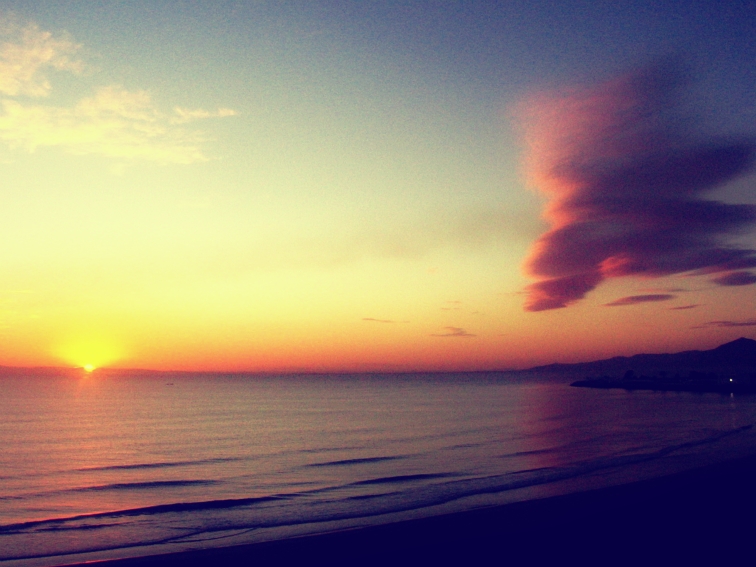 Time for Sunset in Tunisia