The Painted Veils of Yangshuo County

Shortly after sailing through the magnificent karst peaks of Ha Long Bay, we left Vietnam in search of another bewitching karst landscape: Yangshuo Province, China.

We had previously visited Macau and Hong Kong, but our first glimpse of mainland China would be Guangzhou, capital of Guangdong province and third largest Chinese city. Albeit not as chaotic as we expected, Guangzhou is immense. We did not spend much time there, but enough to get lost in Yuexiu Park and to realize we were probably in the worst place for vegetarian meals. 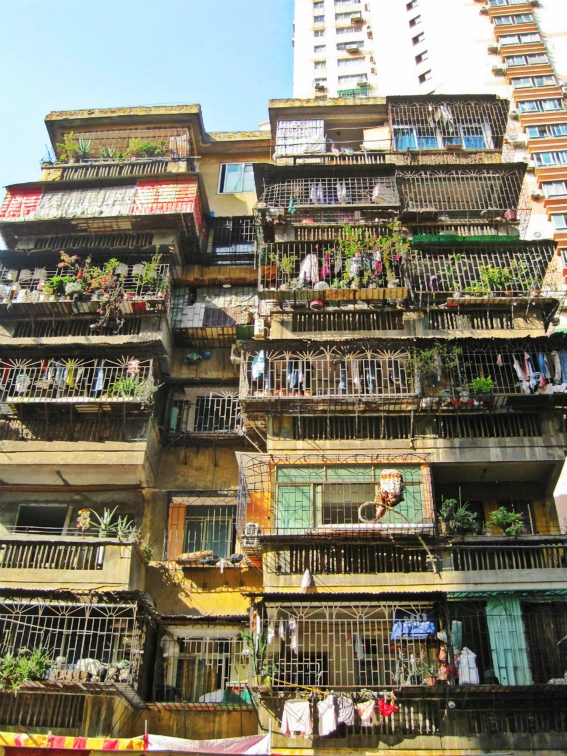 The old and the new in Guangzhou

Back at Guangzhou airport, we boarded a flight to Guilin, which would lead us closer to our final destination. Guilin already displays some of the incredible karst formations we wanted to see, and is extremely popular with Chinese tourists. However, our goal lay further downstream. Hence, we hailed a taxi to take us from Guilin to Yangshuo. Approximately 1 hour later, we were deep in Yangshuo Province.

The karst scenery is nearly as mesmerizing as in Ha Long Bay, the Li River replacing the Gulf of Tonkin as a watery mirror to soaring limestone hills. The beautifully serene landscape has provided inspiration to poets and painters for centuries. Today, the stunning mountain backdrops are still inspiring, but digital photography has displaced pen and ink. Nonetheless, there is poetry every way the eyes turn.

Amidst such delicate elegance stands one our favorite hotels in the whole wide world: the Yangshuo Mountain Retreat. In search of a restful haven, we rummaged the interwebs for something that would spike our interest. Our initial idea was to find a base in the town of Yangshuo, so we could stay close to the Li River and from there explore the countryside. However, after some online research we stumbled upon the Yangshuo Mountain Retreat. 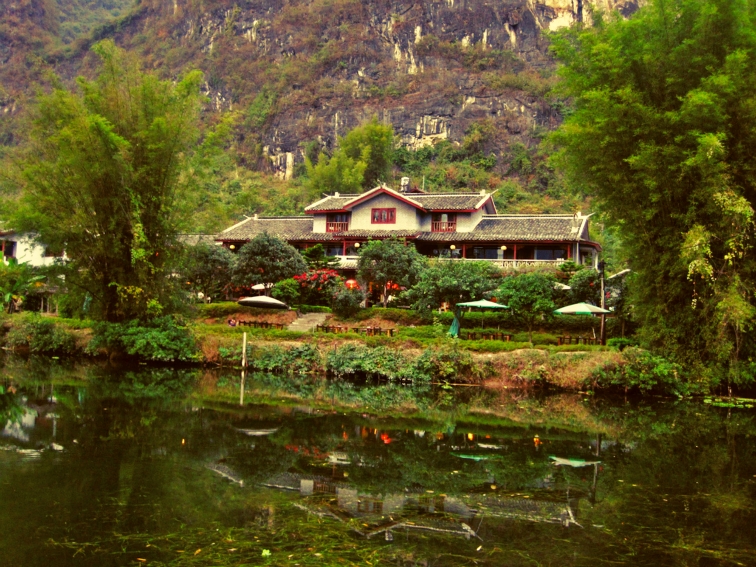 Located by the Yulong River, the hotel is surrounded by karst peaks and seemed to exude tranquility. We took a gamble and booked it for the entire duration of our stay. To say it paid off is a gross understatement.

We were greeted by Yangshuo Mountain Retreat’s Resident Manager Little Fish, who explained the environmental commitment of the hotel and introduced us to the wonders of the Yulong River. Our room was large, comfortable, tastefully decorated and without TV or telephone. We wondered who would ever want a television when faced with such breathtaking views. We soon sat spellbound in our balcony, drinking tea and watching the sun descend over green mountains. 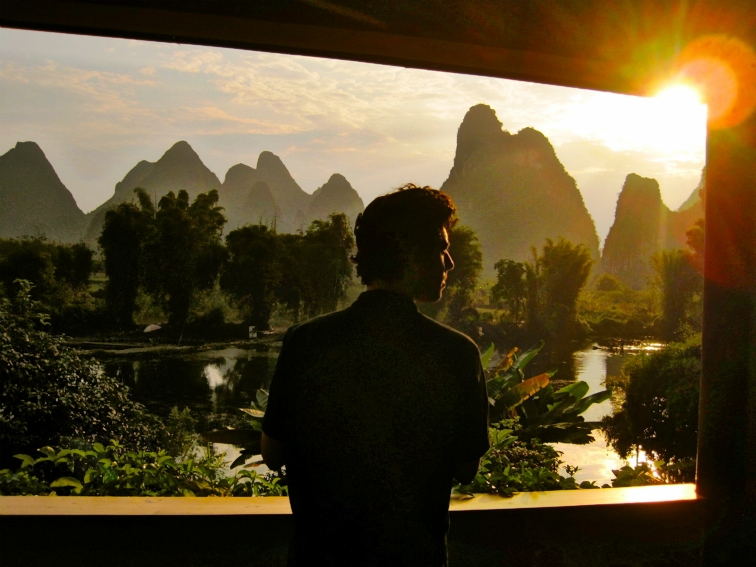 View from our balcony

There are many sights around our lovely retreat, and whenever not idling in the garden watching bamboo rafts go by, we set out to discover what the Yulong valley had to offer – apart from all the magnificent surroundings.

Often we turned to the hotel staff for counsel. We took a deeper interest in the Yangshuo Mountain Retreat when we found that it hires local people and teaches them English and hospitality management. One of the friendly faces advising us was an extraordinary woman called Chun Li (Angel), the front desk supervisor. Born with brittle bone disease, she is a remarkable example of resilience, dignity and intelligence. After consulting with her, we took a couple of bikes from the hotel and were soon heading towards Yulong Qiao, a 400 year-old stone bridge and one of the area’s iconic landmarks.

We followed the Yulong river, cycling along dirt tracks and occasionally bumping into fellow tourists. We passed by several farming villages, where Chinese men and women tended to the fields and went about their lives. As we ambled through gravel and rock, I wondered how the locals experienced living in such an exquisite landscape. It is a fundamental trait of our species to quickly adapt to circumstances, be they favorable or not. In a place like Yangshuo County, do we become so accustomed to beauty that it no longer resonates? Does visual awe become irrelevant in the face of more immediate needs such as nourishment or shelter? Poetry has been known to bloom on empty stomachs, but peasants cannot subsist entirely on poems, even if written in the wind.

I am a country dog, raised in dirt and morning dew. If I had been born amidst the towering karst giants, oblivious to the cuckoo’s song, would I also toil the fertile land without looking over my shoulder? Would I see the outlined limestone veils only in terms of shade and relation to the sun? Or would I rise each day in wonder, for a daily moment unsure if I was still dreaming?

When we finally arrived at Yulong Qiao, or Dragon Bridge, a newlywed Chinese couple was trying to come up with romantic poses for their wedding photographer. We crossed the bridge smiling, and decided to head back to the hotel following the other side of the river. Easier said than done. We got completely lost and were soon in unfamiliar territory, more often pushing our bikes than actually riding them.

We meandered through grass fields and crops, sudden crevasses and lone fishing rods sticking from the mud. We followed the river as much as we could, but had to occasionally rely on bemused locals, who finger-pointed to a general direction in front of us. English was obviously not an option. Certain areas of the Yulong river were completely packed with bamboo rafts, which reminded us of how popular the area has become.

As the sun blazed, we continued forward, until we were no longer certain of still being in China. Eventually, we recognized the karst formations surrounding us and were soon crossing the river right in front of the hotel.

Undaunted and cooled down after a refreshing drink, we were shortly back on the pedal and on our way to Moon Hill. Easily recognizable as a gargantuan hole through the hill, it is one of Yangshuo’s main attractions. There are several rock climbing routes, but it’s mostly visited for the panoramic views of Yulong valley’s spectacular scenery.

Not far from Moon Hill is another staple of Yangshuo’s tourist path: a 1,400 year old banyan tree. Throughout the centuries it has been revered by people who have flocked to it in hopes of being cured of illness. It is also renowned for providing the setting for an emblematic scene in the popular 60’s Chinese movie Liu San Jie, a name we would return to later on. 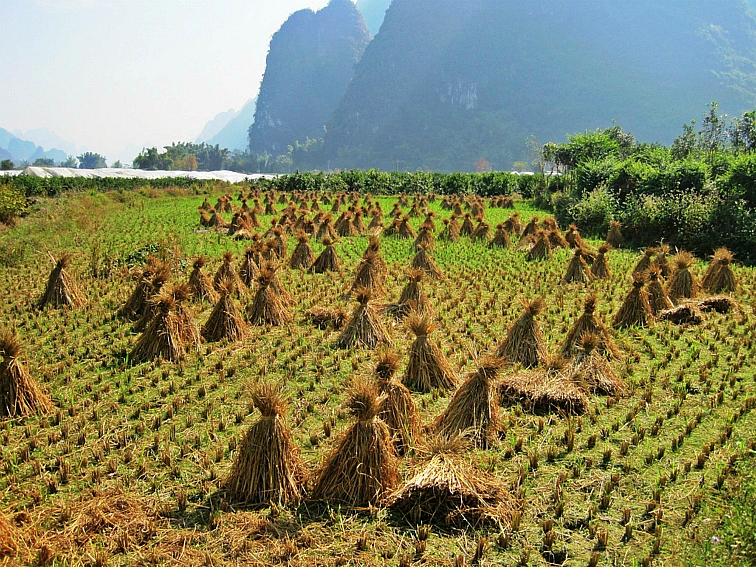 A view of the countryside

Yangshuo’s karst formations, like those in Ha Long Bay, frequently have caves within them. On one of our bike excursions through the countryside we spent some time at the Buddha Water Cave. Five kilometers long and running through 3 mountains, the cave is full of impressive stalactites and stalagmites. Although lacking the sea smell of Sardinia’s Neptune’s Grotto, it features mud baths, a small waterfall to rinse off the goo and finally hot springs to relax the muscles. It was almost deserted when we went, so we had a private tour and the mud baths to ourselves. We floated in goofy glory and greatly enjoyed it.

Back at Yangshuo Mountain Retreat, we asked Little Fish and Chun Li for suggestions on spending an evening in Yangshuo town. They mentioned other guests had already booked a taxi for a show named Impression Liu Sanjie. Apparently, it was a big tourist draw. We were decidedly skeptical, mass entertainment not being part of our list when traveling to exotic lands, but after learning the show’s creator was Zhang Yimou, director of personal favorite Raise the Red Lantern, we became intrigued. OK, we said, count us in.

Later that evening we met our fellow companions, who resided in Hong Kong. We quickly exchanged greetings and appreciation for the metropolis by the South China Sea. We were dropped off at the entrance of the Sanjie Liu Sing Fair, close to Yangshuo’s West Street. 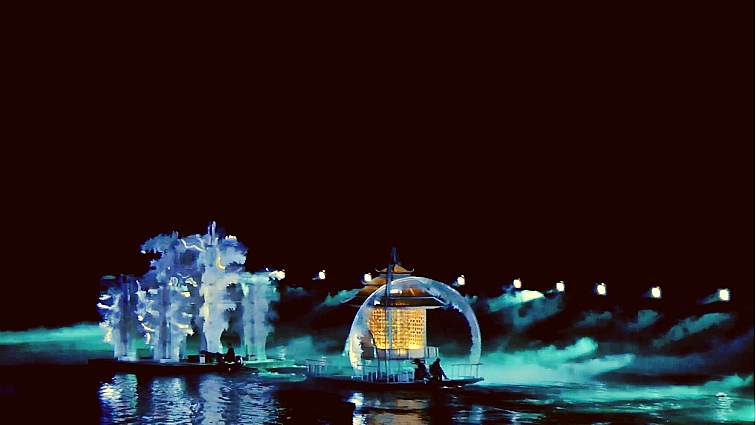 We managed not to get swallowed by the formless maelstrom, and were soon inside the open air theater, trying to find our seats with the rest of the now somewhat dispersed crowd. To be fair, everything was extremely well organized, especially given the number of people. We finally sat at the amphitheater, already entertained by watching the audience gathering around us. They seemed mostly Chinese, and ready for a good show.

In the beginning there is only darkness. We could see a few large contours in the distance if we squinted hard enough, but didn’t really know where the spectacle would play out. Hopefully in front of us, we thought. As the public settled into their seats, a mellow song started playing, accompanied by an image floating in the sky. Then, the lights came up and 12 knobby karst hills appeared in front of us, sumptuously lined along the winding Li River. We were impressed.

As the show progressed, we marveled at the sublime backdrop while surrendering to the visually arresting game of lights and choreography. As one shore of the Li River lit up, a part of the story would play out. Whenever the other shore also lit up and the actors were all brought under the gaze of the karst mountains, the crowd erupted in “OOOOhhhhs” and “AAAAAAhhhs”, visibly entranced by the beauty and sheer magnitude of the performance.

The show employs a staggering 600 actors, most of them local farmers and fishermen. It’s all sung in Chinese, but the tale can be generally understood. The gist of the story is the typical honest farmer vs evil warlord fare, with a love triangle thrown in for good measure, but strikingly realized.

We loved every minute of it, and felt it was a charming ending to a memorable trip. The next day we were back in Vietnam, still dazed by the superb natural monuments and artistic creations of Yangshuo Province. 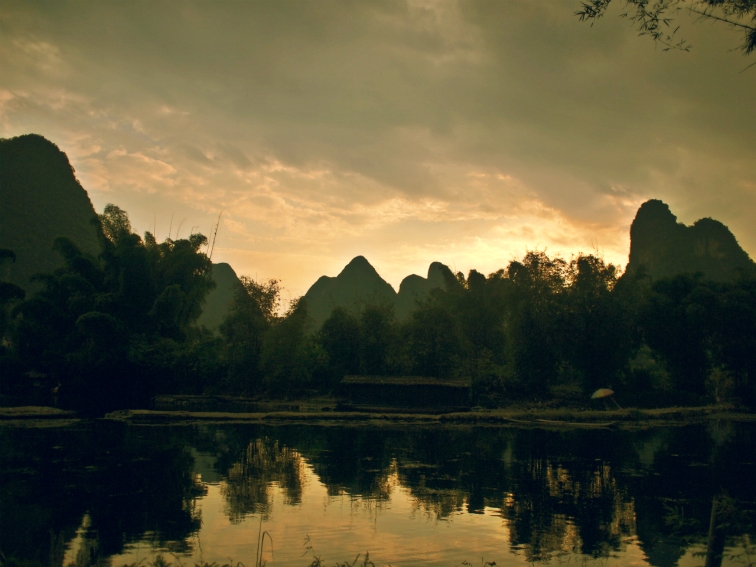 The karst peaks of Yangshuo County