The clock ticks 4:30 in the morning. We leave Las Vegas as the sizzling sun begins to yawn, heading West. Destination: Death Valley, a parched land of delirium and narrow asphalt, illusion to many but home to only a few. It would be our most memorable drive so far. 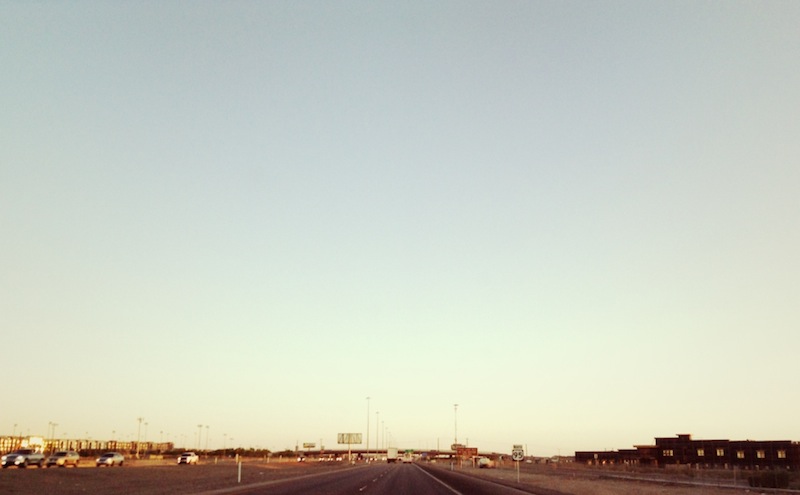 After the lunacy of Las Vegas and the mesmerizing magnitude of the Grand Canyon, we planned to continue our North-American road trip towards the gentler shores of the Pacific Ocean. The goal would be a long weekend in San Francisco, where we would finally be able to rest our sore bodies and leave the car keys alone. However, we would still stop at Yosemite National Park, and a day before we would have to face the daunting drive through Death Valley, a near-mythical area within the Mojave Desert.

I must admit this was my idea. I’ve always loved the road and its many symbols and metaphors, particularly the vast and arrow-like roads of the USA, as depicted in countless movies I adored as a kid. Vanishing Point and Two-Lane Blacktop are two of the most iconic, but the list goes on and on and on… 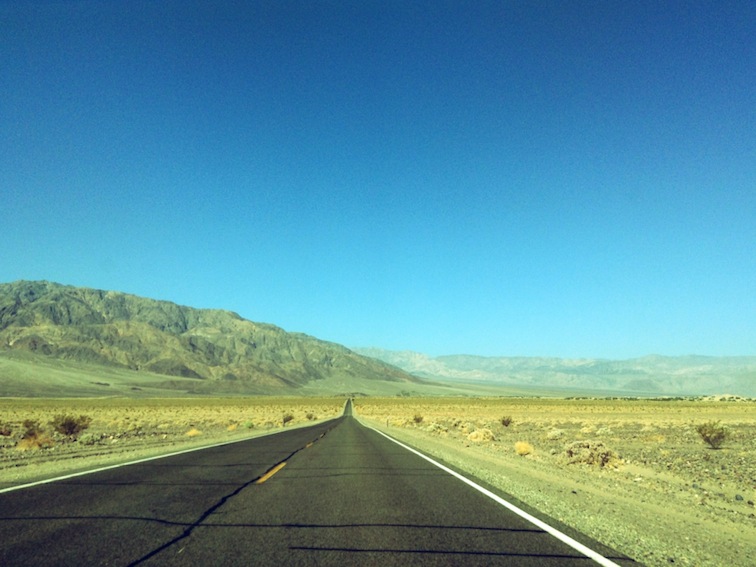 I did not have high expectations though. I imagined a straight road under a blazing sun, through which we would race like a shadow. That would have been enough. C’mon, I’d be driving through the valley of death! How’s that for a metaphor? But there would be surprises, as there usually are…

First off, it was not that hot. OK, maybe not ideal temperatures for jogging or playing canasta, but after the senseless heat of Las Vegas we found Death Valley pleasantly underwhelming. Obviously, it helped that we crossed it early in the morning, but still… for a place holding an all-time record of 57 degrees Celsius, we felt we had it easy.

Second, the landscape is absolutely stunning. Whereas the general idea of Death Valley is of a deserted corridor, the reality is much different. 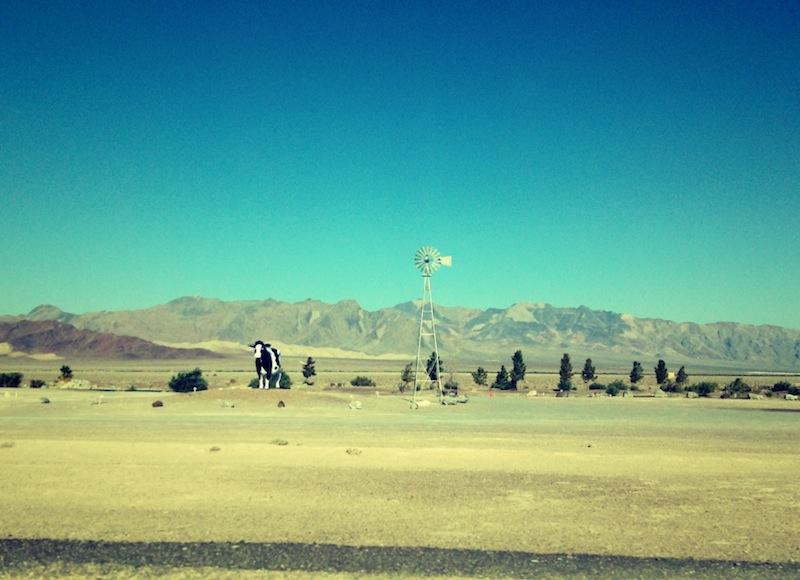 After paying the 20$ visiting fee at Furnace Creek, we sped away into the horizon, ready to embrace the desert. Our first detour was to the badlands of Zabriskie Point, old setting of the Pacific Coast Borax Company and backdrop of a counterculture cult film soundtracked by Pink Floyd. The colors range from bright yellow to dark brown and fiery red, all washed through ventricular crevices, giving it a surreal luminescence akin to an acid trip.

From the psychedelic formations of Zabriskie Point, we continued our journey amidst the stoic beauty of the Joshua Trees sprinkled in the distance, mountains appearing and disappearing as the road went downwards and upwards in successive dips, some sudden and deep, turning our car into a wild roller-coaster.

On one of the long linear stretches of road, as we drove solitary through a sweeping segment of scorched earth, Elle suddenly blurted out “Is that a…” She didn’t have time to finish the sentence. I glanced quickly to her side, only to see a menacing black jet fighter almost perfectly squared in her window, immense and ridiculously close, one wing slightly tilted to the ground, as if it had just turned to eviscerate a designated target: us. One millisecond later it was on top of us, and the skies seemed to explode in the wake of its sonic boom. The car shuddered uncontrollably as we cowered in unison, a part of our brains still unsure if we had somehow entered an alternate universe. As we looked to our left, we could only catch a glimpse of the plane’s tail, as it disappeared back to wherever it came from, leaving nothing but azure skies and our own buzzing eardrums. So that was our Top Gun moment of the day… 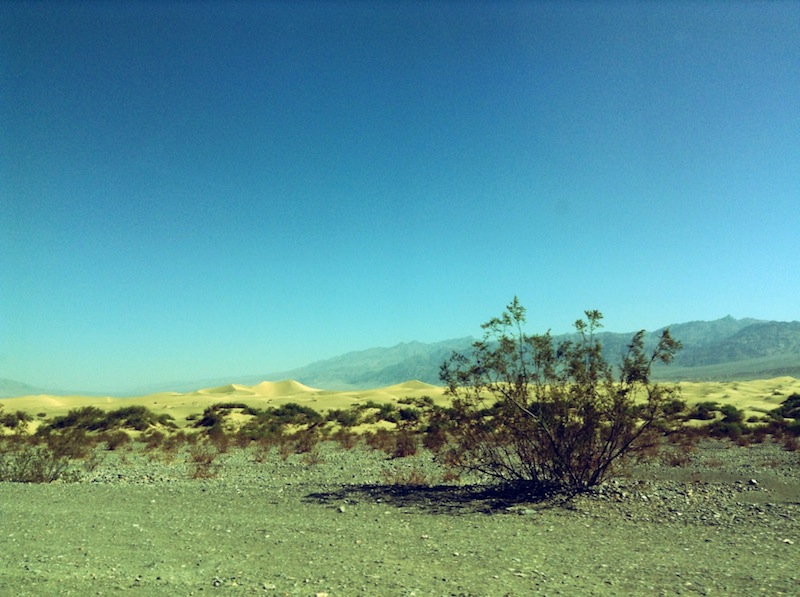 As we zoomed past the elegant Mesquite Flat Sand Dunes, the landscape began shifting once more. The outlying mountains gathered closer, and by the time they appeared towering with snowy peaks we knew we had left Death Valley behind, together with a remarkable road trip full of sound and fury, unrelenting awe and shadowless grandeur. 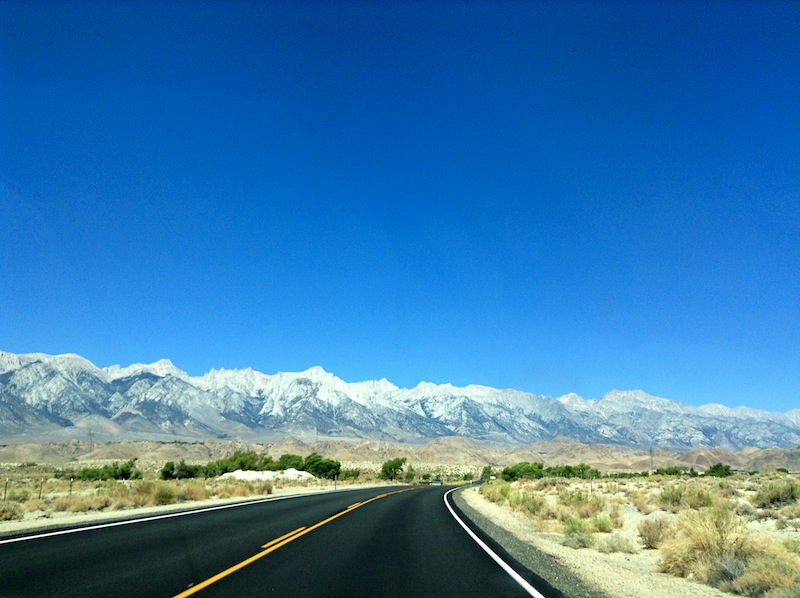 On our way to the pastoral charm of June Lake, we could only think of doing it all over again.