Grand Canyon – A Lodge with a View

The Grand Canyon’s most popular landmarks are located in the South Rim and in the West area, where the Skywalk lets visitors gaze into the abyss. As our introduction to the stunning landscape of the Grand Canyon, we chose the less crowded North Rim, heavy with dirt trails and serpentine trees.

It was a decision stemmed from a desire to also see the Kaibab Plateau, later confirmed by friendly advice as a sound option. All that was left to do was to actually make it there from Las Vegas, and see for ourselves what all the fuss was about. After all, they’re just big rocks, right? 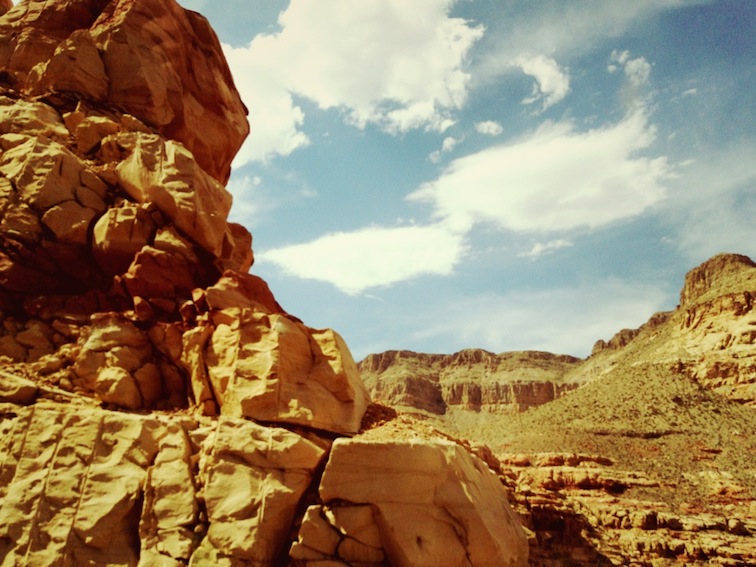 After a few days wandering the Las Vegas Strip and dragging Elle away from the blackjack tables at Monte Carlo’s Casino, we rented a car and drove off into our North-American road trip. Well, at first we just hiccuped our way out of the parking lot: following much fidgeting with the car’s instrument panel (what do all those lights and buttons mean and are any of them important?) and a brief but infuriating struggle with the asinine automatic shift (I felt like a senior in Florida), we were on our way.

Well, sort of… We still had to leave Las Vegas and find our way to the Grand Canyon North Rim, which took a while to do. American signage is at times perplexing to European minds (or maybe we’re just spatially challenged), so we spent quite a few minutes figuring out where northeast was, and other such general instructions dictated by Google Maps.

Oh yes, we’re tremendously tech savvy… Being on a budget, we forsook the purchase of a GPS and relied instead on Google Maps, which I looked up on my laptop, tweaking it so we’d drive through all the places we wanted to see. I then printed the directions as a PDF file, which was later copied to Dropbox and synced with my iPod Touch – and presto, we had our very own half-baked version of GPS!

Well… the image arising from all of this is of a bespectacled and bedraggled driver trying to make sense of everything around him and a co-pilot holding a thin piece of ridiculous technology, mumbling nonsensical instructions. But as the song goes: “I’m a driver, I’m a winner; things are gonna change, I can feel it”. (PS – Ignore title)

Driving through the Great Basin Highway, close to the Valley of Fire, the gaudy mirage that is Las Vegas was made even more striking. Only a few kilometers outside of Sin City, the landscape returns to its former self, before the Hoover Dam was ever built and some mobsters decided there was a lot of money to be made from gambling in the desert. We stared in disbelief as the temperatures rose to 45 degrees Celsius and our car fortunately refused to melt.

Outside, the road seemed to morph into an extension of the car. Crossing the border of Nevada into Arizona, we reached the town of Mesquite. There, the mountains which had begun to appear first as faraway peaks of golden dust were now engulfing us. We drove through dramatic canyons, rising steep into watercolor skies. 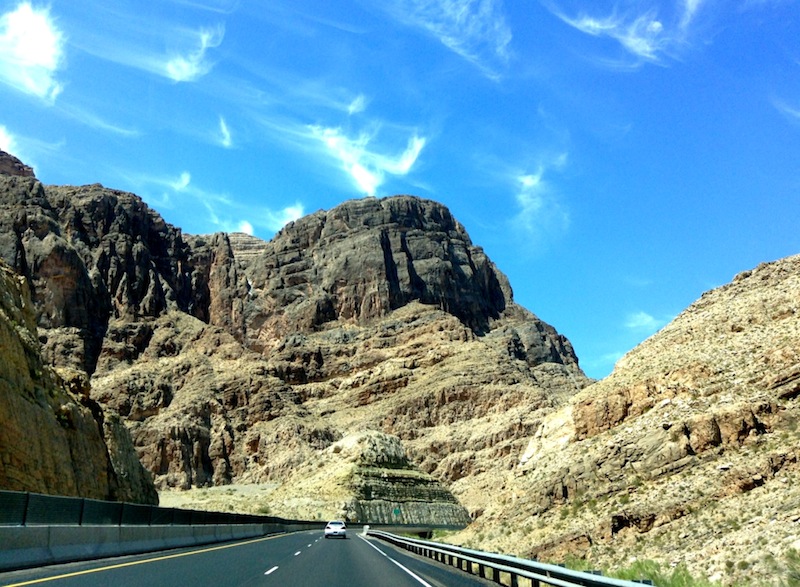 From Arizona we drove into Utah, speeding by parched small towns with names like Hurricane and mountains named Canaan. They are desolate places, hard on the eyes and scorched beyond redemption. Who are these people, living in makeshift camps under such an unforgiving sun? This is a land where even reptiles must have a hard time, proving we are a thoroughly resilient species indeed. 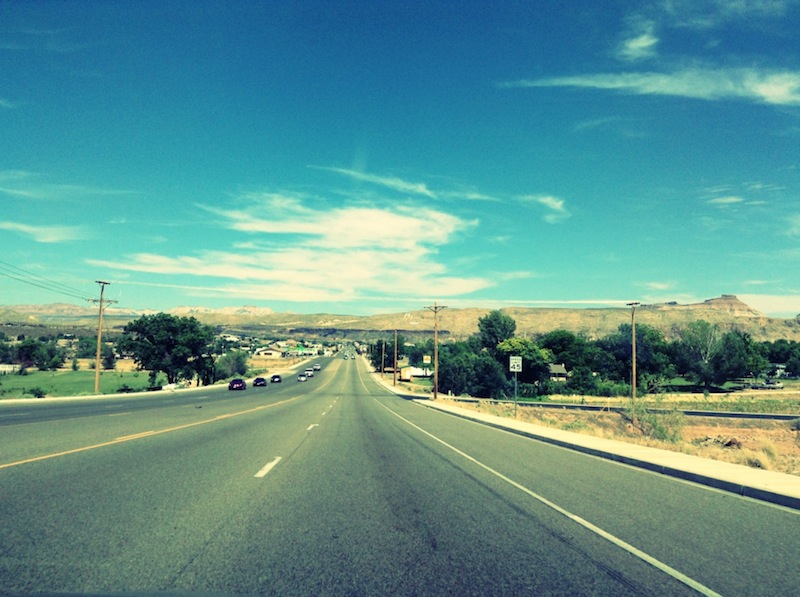 Continuing eastwards, we moved back into Arizona, heading to Fredonia, the last small town before the natural magnificence of the Grand Canyon. Southbound on AZ-67, we left the valleys and ascended to the lush meadows of the Kaibab Plateau. 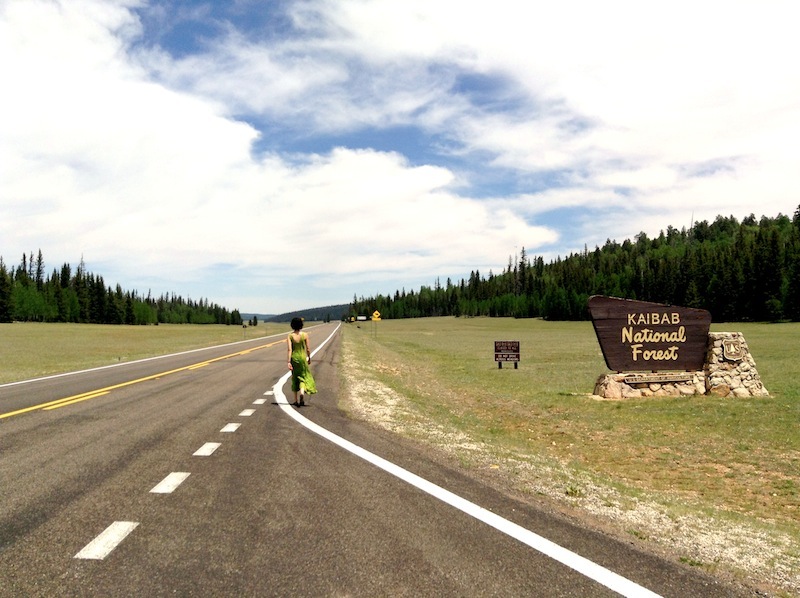 It is an uncanny experience, this sudden shift from desert to greenery, almost as if we had entered a dream, or had finally succumbed to heat madness and were now hallucinating verdant pastures and placid lakes taken out of a flawless postcard. 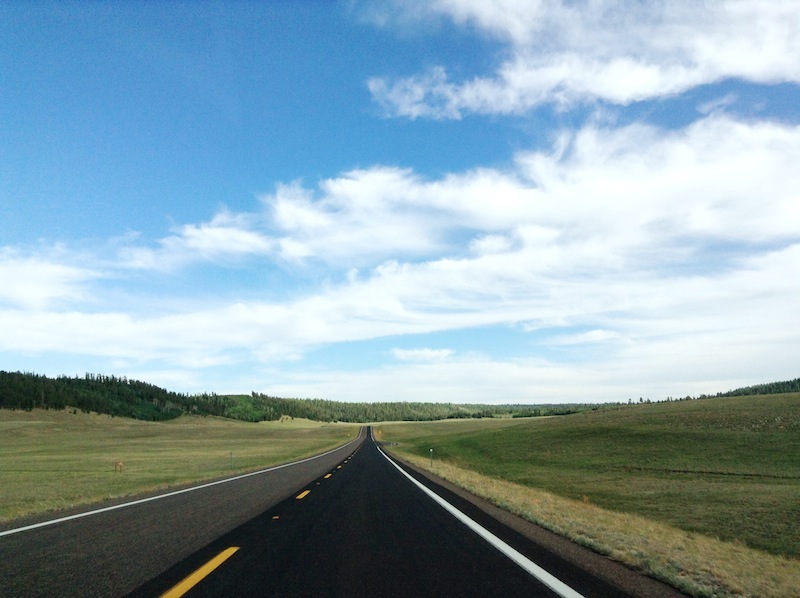 After 6 dizzying hours on the road, we finally made it to Grand Canyon National Park. We paid our 20$ car fee (valid for 7 days) to a young park ranger who presented us with a map and a booklet with valuable information. Shadowed by hospitable trees lining the winding road, we cruised in the afternoon glow, marveling at the miraculous effects of water. We came to a halt at the very end of the road, at the border of the North Rim, where we found our haven in the clouds: the Grand Canyon Lodge. 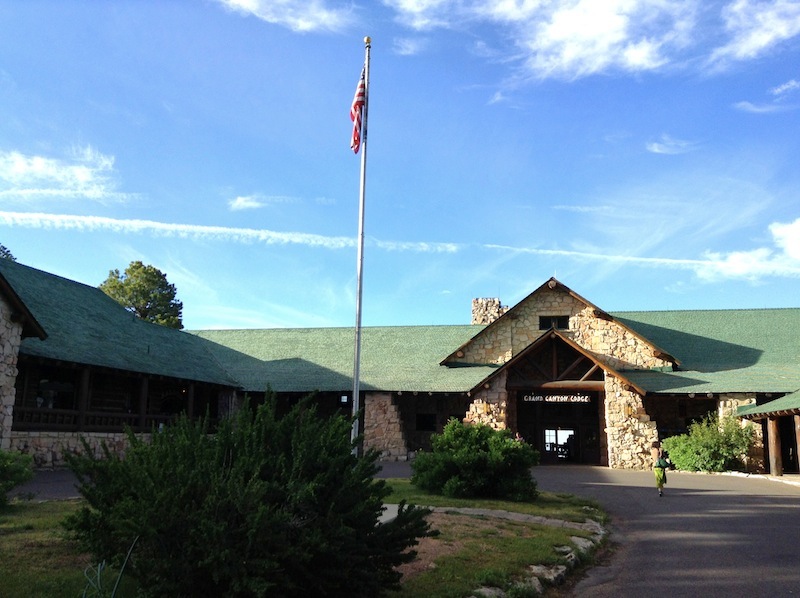 Albeit morose and dehydrated, we could not resist to run and see the view. As in most things in life, it’s the first look at a natural beauty that sticks in the memory, the initial wonder which lingers even after the moment is gone. Going through the lodge’s main building, avoiding fellow tourists checking-in or getting ready for dinner, we got our first, magical glimpse of the Grand Canyon. It did not disappoint. 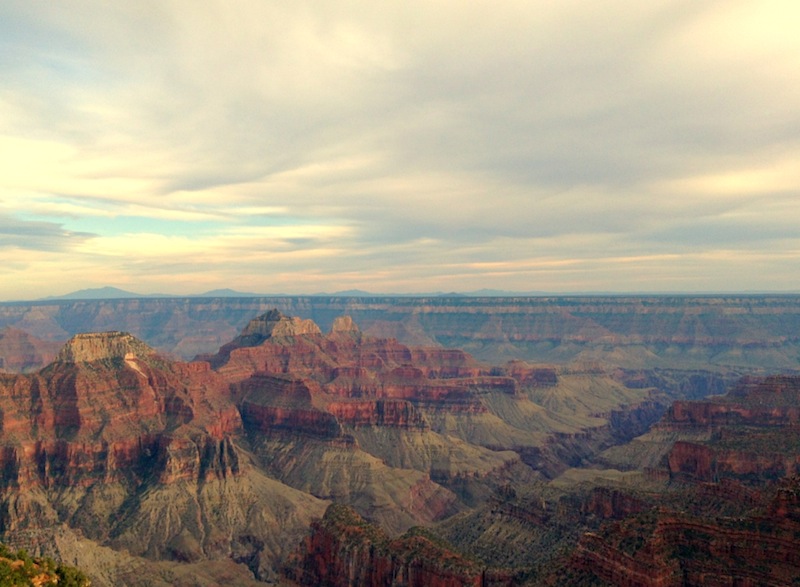 After quickly laying our meager belongings in a random corner of our very cute cabin, we pulled ourselves together and took a brief tour of Bright Angel Point, a short trail with remarkable views of the North Rim. We also stumbled upon one of the Grand Canyon’s native inhabitants: the Golden-mantled Ground squirrel, seemingly under a constant dose of potent steroids.

As we soon discovered, every single view was remarkable, from any point we chose. Meandering slowly through sheer drops and precipitous vegetation, the imposing beauty of the Grand Canyon infused our minds and bodies with a sense of profound tranquility, obliterating all other immediate needs and recollections of the day’s scabrous (yet exhilarating) landscapes.

We were in the presence of giants, finely sculpted along the ages, each layer a reminder of ourselves and where we came from. It reminded me not so much of a scar as of an open womb, where if we look deep down enough we may see the fiery glint of our own existence. 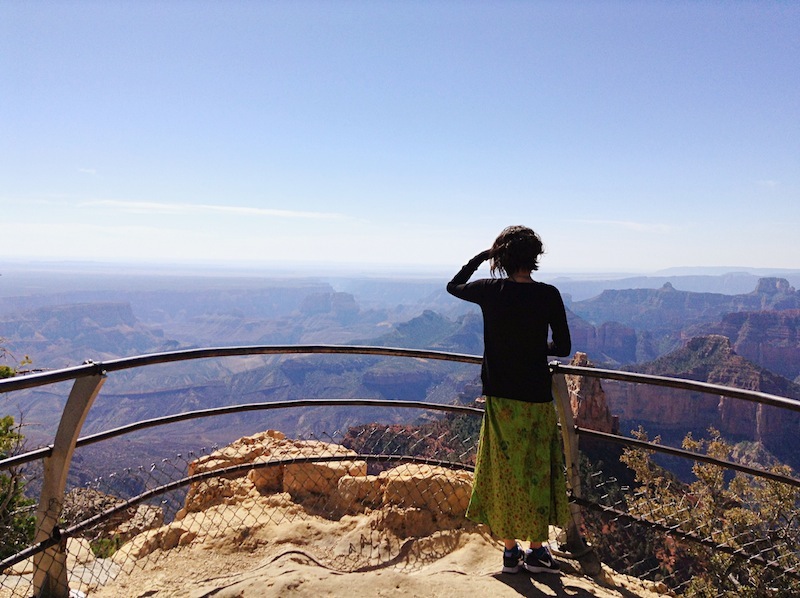 Elle in the Grand Canyon

Teary-eyed from tiredness and awe, we succumbed to the day’s many phantasms, going to sleep amidst the soothing smell of Ponderosa pines. We woke up the following morning just in time to catch the sunrise over the North Rim. Some early birds, mostly middle-aged, were already setting up their gigantic cameras in strategic positions. As we found out, sunrise in June occurs around 5 o’clock, and it happens fast: one moment we were traipsing about in the dark, the next everything was illuminated by a radiant morning sun. 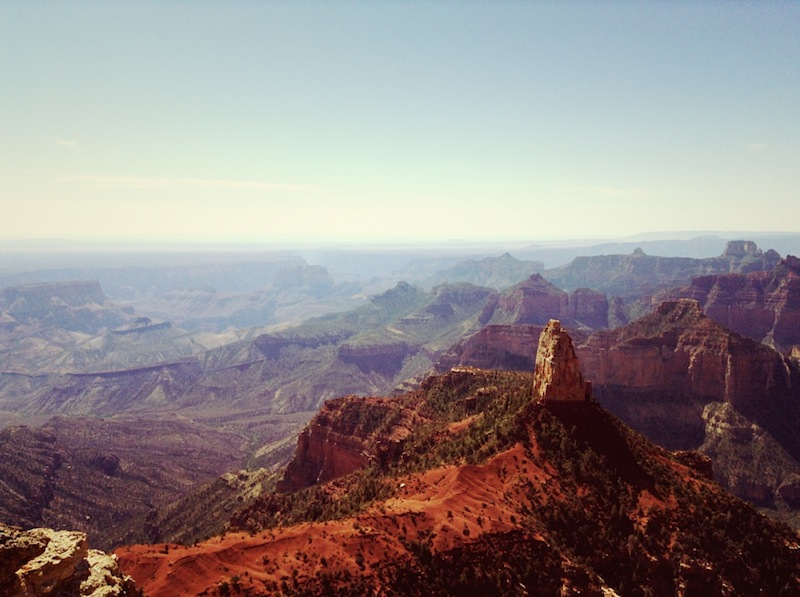 There are many trails scattered around the North Rim. Some go all the way down to Phantom Ranch, like the North Kaibab Trail, while most provide an endurance test and different vistas of the innumerable shades and turns of the rocky mammoths. Since we were short on time, we drove to some of the more iconic spots, hopping off to follow a few short trails on foot. 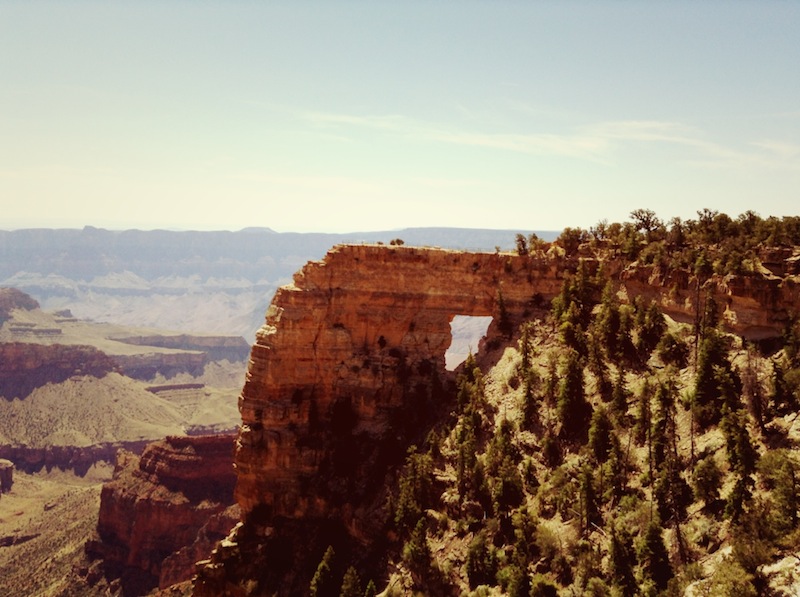 Before departing once again to mad Las Vegas, we ambled freely through Vista Encantada, Point Imperial and Cape Royal, one of the few spots in the North Rim where the Colorado River can still be seen sculpting the indelible masterpiece that is without doubt one of the most stunning natural wonders of our extraordinary world. 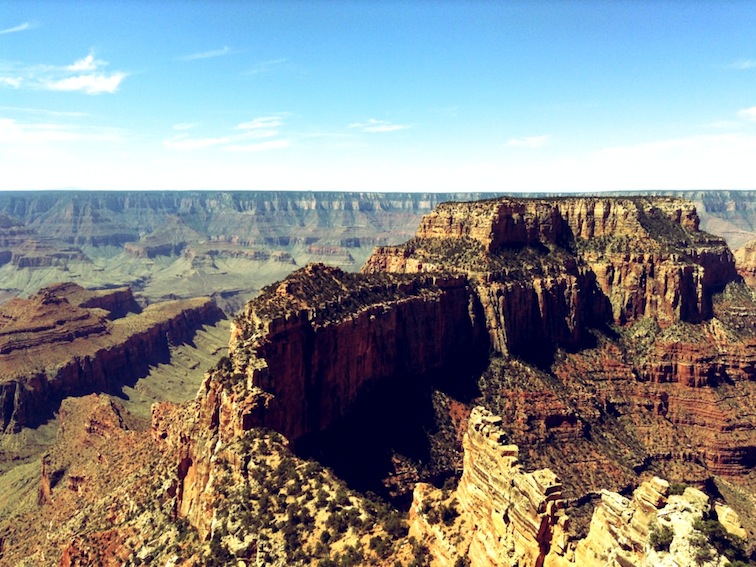 As a leaving note, I must mention the obvious. My poor attempts at photography do no justice whatsoever to the Grand Canyon’s majesty. They are mere shadows of a ragged copy, and give only the slightest hint to the landscape’s true power. Even while there, it took us a while to get used to the size of everything around us. Our perspective had to shift constantly, to accommodate the notion that the many bushes we saw perched on distant cliffs were actually trees. Our brains had to keep recalculating: “So, if that’s a tree, then we’re much smaller than it, then that precipice over there is… OH WOW!”

Some tourist destinations in our world are overrated. The Grand Canyon, on the other hand, is merely overwhelming.