Mayan culture is still remarkably visible in Mexico. One needs only look at the faces, language and clothing of indigenous people selling their wares in the main market of San Cristóbal de las Casas to recognize a diverse and ancient culture, which against all odds has managed to survive into the 21st century.

The history of the Maya is also present in the many temples scattered around the gargantuan country of Mexico, many clutched from the engulfing claws of nature and returned to a derelict semblance of former glory.

Having already visited the grandiose structures of Teotihuacán, the serene hills of Monte Albán and the more renowned temples of Chichen Itza, we decided to embark on a day trip to the Pre-Hispanic City and National Park of Palenque, an archeological site in the state of Chiapas surrounded by lush vegetation and honored as a UNESCO World Heritage Site. 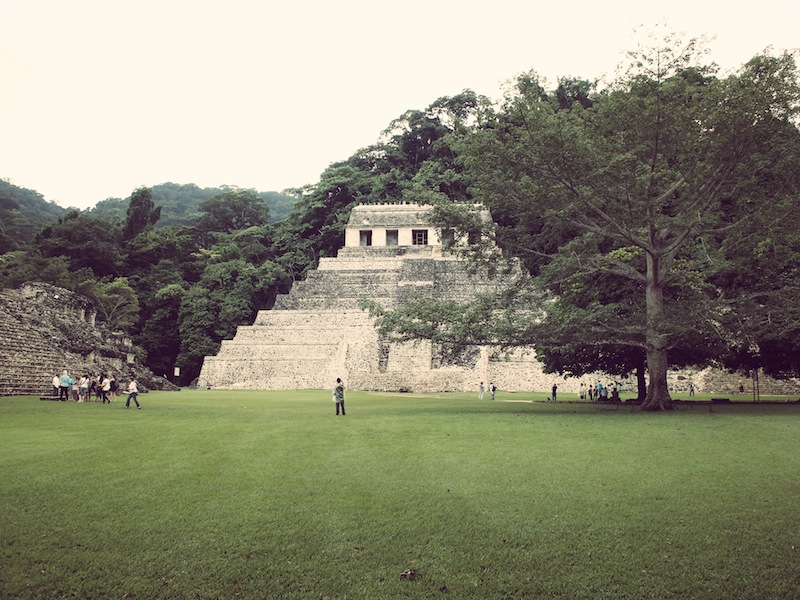 Temple of Inscriptions in Palenque

There are buses leaving San Cristóbal de las Casas towards Palenque, but since we also wanted to visit a couple of places along the way we ended up going on a tour. There are several tour operators lining the Real de Guadalupe pedestrian street, offering many options to see some of the great sights embellishing the Mexican state of Chiapas.

We went with Viajes Chincultic, which offered a day trip to Palenque on a comfortable minivan for 400 MXN/22.7 EUR per person, an amount which includes entries to all the stops made along the way.

We were picked up at our place in San Cristóbal at 5:40 in the morning and would return at 22:00 – a full day of traveling and exploring. A direct route to Palenque takes around four hours and a half, depending on road conditions, demonstrations or whatever else Mexico throws at you. Luckily, our voyage went without a hitch, and although tired we managed to return home within regular hours.

The tour we chose took us through the cataracts of Agua Azul, the deafening waterfall of Misol-Ha and the archeological site of Palenque.

First in our trajectory was Agua Azul (Blue Water). Situated in the Lacandon Jungle, it is a series of picturesque waterfalls cascading into turquoise pools of water. 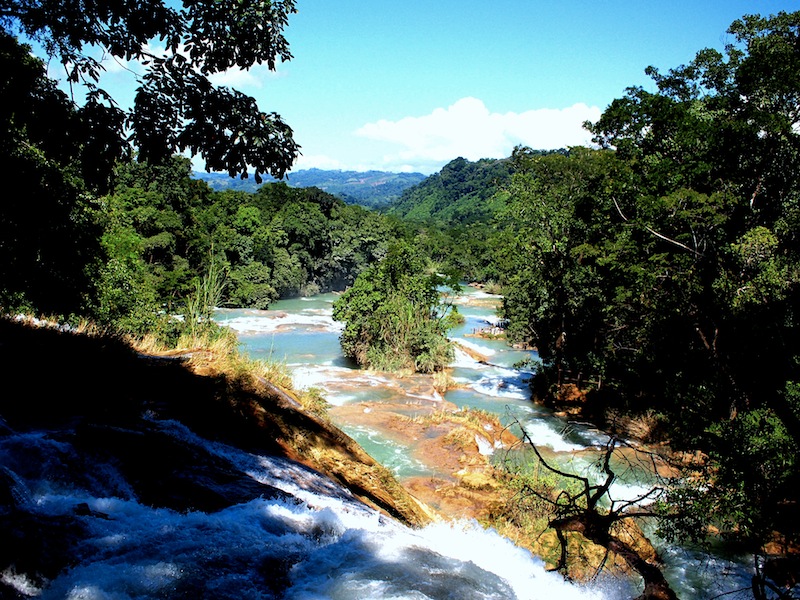 Visitors are allowed to swim in a few of the lagoons, so it’s best to bring swimwear and towels. There are also rafts crossing the waters in front of the main waterfall, which provide a privileged but somewhat shaky view of beautiful white foam running through orange bedrock. 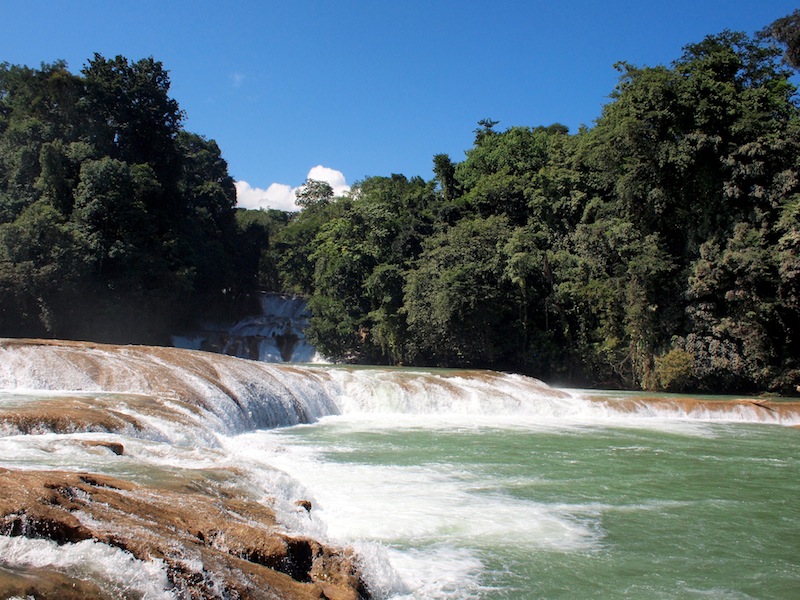 Breathing in the colors and warmth around us, we were reminded of the Kuang Si waterfalls in Luang Prabang, Laos. Nonetheless, and although the setting was similar, we promptly realized the smells of Latin America and SE Asia are markedly different. This is one of the boons of travel: noticing the olfactory nuances of the earth and the air around the world. 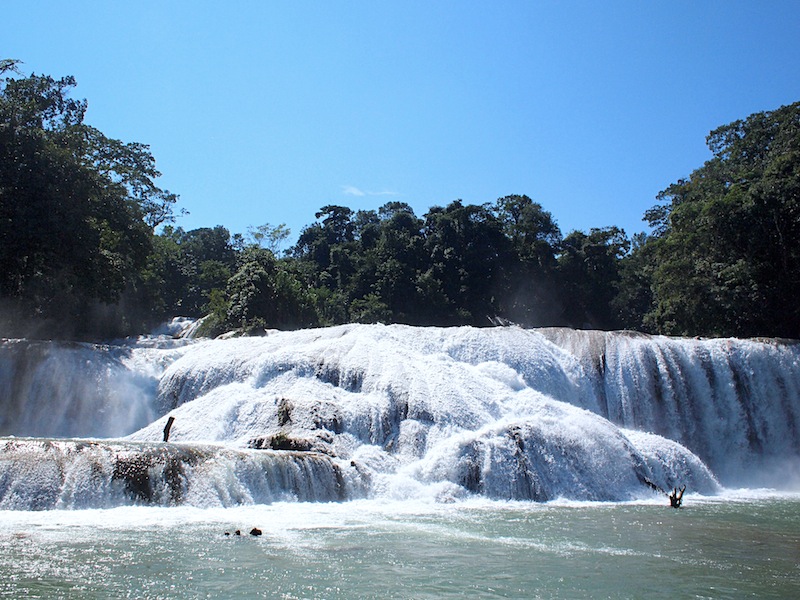 Food is readily available in numerous shacks positioned along the ascending rock stairs leading to the top of the waterfall. We assume it might get busy during high season, but when we visited it seemed like a good place to spend a few hours munching on quesadillas and enjoying the scenery. A note of caution though: during the rainy season the water might not be as blue as the name suggests.

One hour and a half away from Agua Azul lies the waterfall of Misol-Ha, powerfully spraying the air from a height of 30 meters. The drizzled pool below is swimmable, but quite deep, so caution is advised. 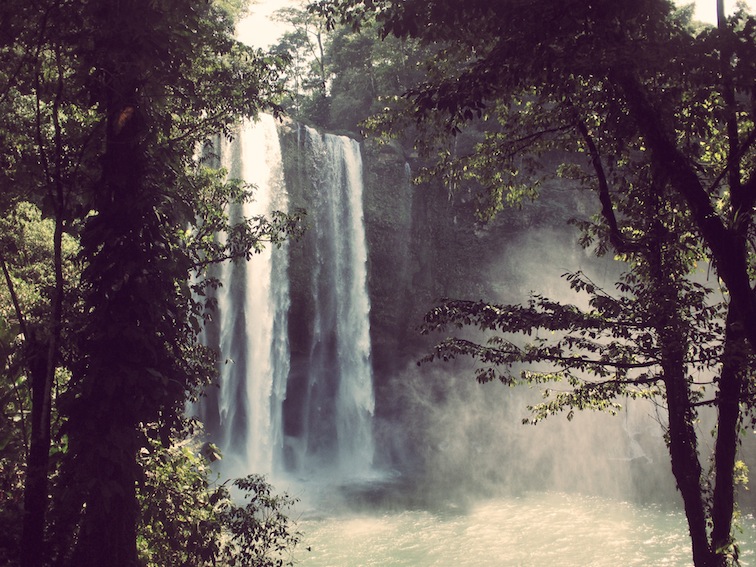 The main attraction of Misol-Ha is the option to walk behind the roaring waterfall, where getting drenched is the only possible outcome.

Shortly after Misol-Ha, with bellies full and soaked hair, we arrived at the entrance of the Pre-Hispanic City and National Park of Palenque.

The magnificent ruins of Palenque were discovered by European eyes in 1773, which prompted the first attempts to reclaim the ancient city from the devouring jungle. 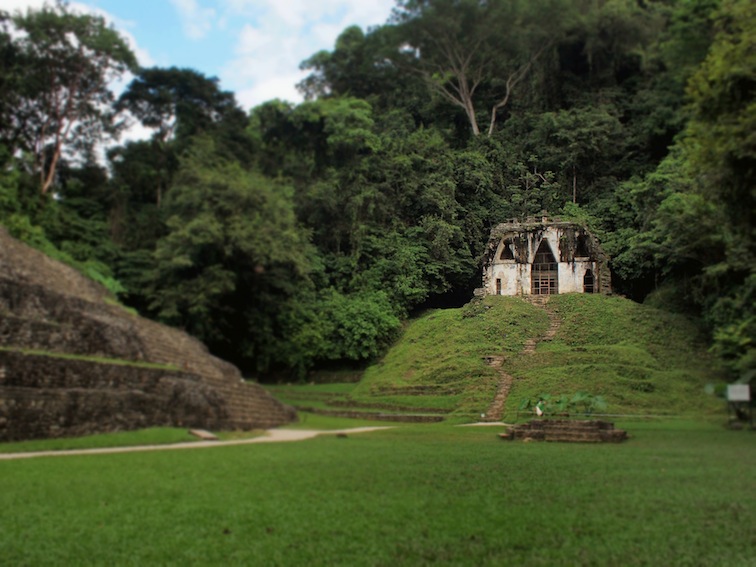 Palenque: Temple of the Foliated Cross

In 1841, travel writer John Lloyd Stephens and artist Frederick Catherwood published Incidents of Travel In Central America, Chiapas, and Yucatan, a vastly read book responsible for bringing Palenque to the attention of a large and curious Western audience. 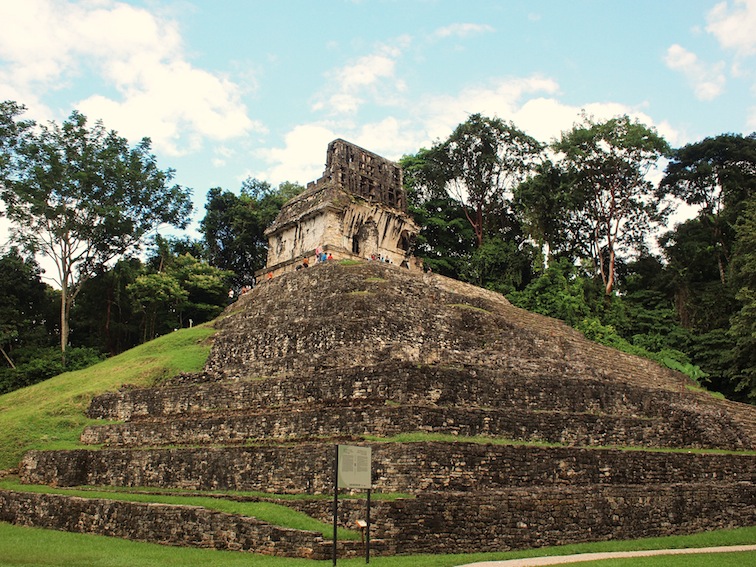 Palenque: Temple of the Cross

The culmination of various intermittent explorations occurred in 1952, when archaeologist Aberto Ruz Lhuillier discovered the tomb of K’inich Janaab’ Pakal, Palenque’s greatest king, sealed inside the Temple of Inscriptions. From then on, Palenque became one of the most studied archeological sites of Mesoamerica. 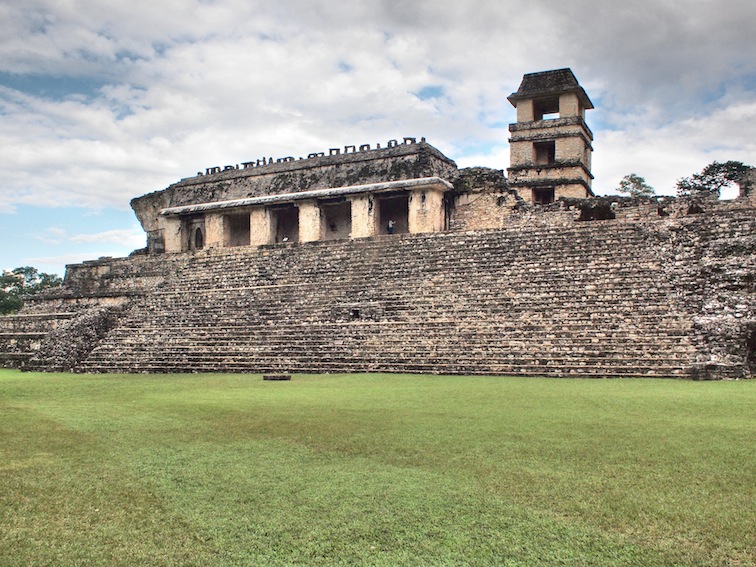 Although founded more than 2000 years ago, the city of Palenque achieved its apogee between 500 and 700 AD, when its influence spread to parts of what are nowadays the countries of Belize, El Salvador, Guatemala and Honduras. 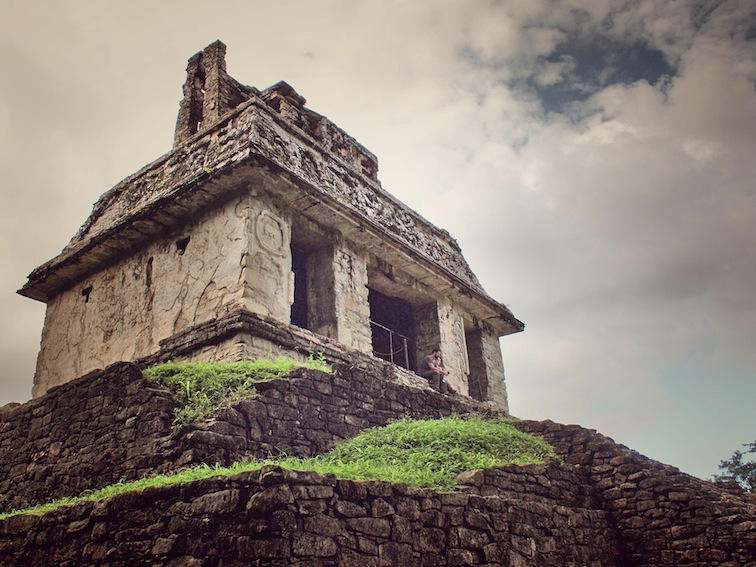 Palenque: Temple of the Sun

Palenque was once a massive city encompassing 8 km2, of which only 10% have been presently explored. Like in other major Mayan metropolis, local topography has been molded to suit architectural needs, including the channeling of Otulum, a tributary of the Usumacinta river which crosses the city to this day. 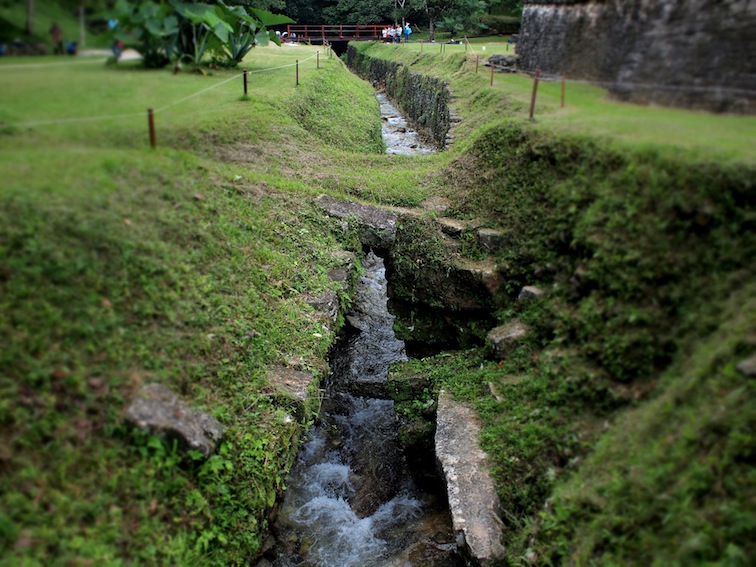 When Palenque was abandoned at the end of the 10th century, it joined the ranks of other sprawling ancient cities (such as Angkor Wat) and became lost to the world, engulfed in vegetation and mist.

Palenque: Temple of the Skull

As it stands today, continuously explored but still mysterious, it is a vivid reminder of a superbly original culture, powerful yet sophisticated, long gone while also present – in the faces and language of its descendents, still walking the streets of Mexico.