Between sipping mezcal and gorging on chocolate, we spent a day visiting the pre-Columbian archeological site of Monte Albán. Located 9 km away from the colonial town of Oaxaca, Monte Albán’s ceremonial center is built atop an artificially created hill, slowly carved from a mountainous range across millennia.

As with Teotihuacán, the various temples and pyramids are organized according to a keen sense of mass. Hence, enormous structures are paired with wide open spaces, giving the whole platform an uncanny topography, suited to inspire awe and reverence.

Monte Albán is recognized as perhaps the first urban civilization in Mesoamerica, reaching a population of 50,000 around the year 800. It was home to a succession of ancient civilizations: the Olmecs, the Zapotecs, who saw it attain its peak, and, as it entered a period of inexorable decline, the Mixtecs, until the Aztecs took over the valley shortly before the Spanish arrived.

Elle up high in Monte Albán

During its heyday as a Zapotec capital, Monte Albán dominated most of the neighboring highlands. One of the ways the Zapotecs indicated their power was by displaying several carved stone monuments depicting tortured war prisoners. These figures, known as “Danzantes” (dancers), appear in distorted positions, including a few who seem to have suffered genital mutilation. 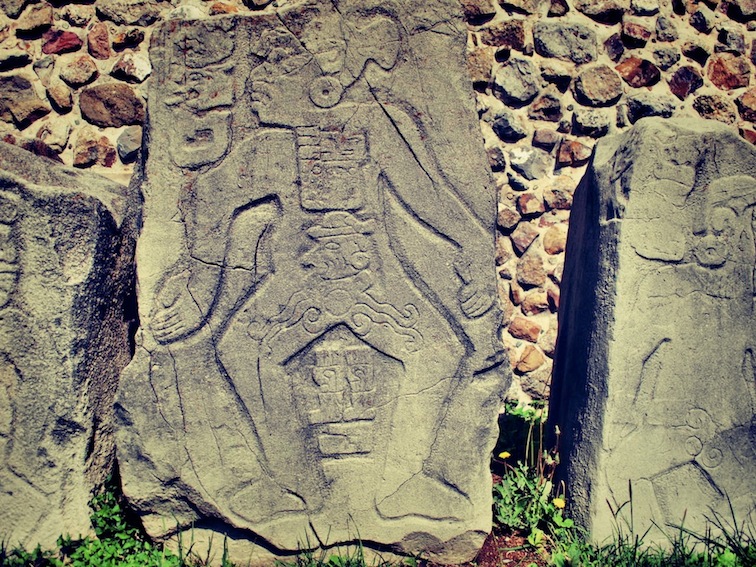 Monte Albán’s acute social stratification is evidenced by the bigger size and higher placement of the structures belonging to the local elite. The city’s wealth is further corroborated by the vast amount of exceptional objects found inside its ancient tombs, a great number of which can be found at the State Museum of Oaxaca.

Together with Oaxaca’s historical center, the archeological site of Monte Albán has been placed on UNESCO’s World Heritage List. Although perhaps lacking the natural grandiosity of Teotihuacán or even Chichen Itza, it is nonetheless a stunning example of Mesoamerican culture, enhanced by great views of the Oaxaca Valley, and should not be missed.

Getting to Monte Albán

We took a shuttle van from Mina street, which can be booked at the lobby of Hotel Rivera de Angel. The ride costs 45 MXN (2.7 EUR) per person and takes approximately 20 minutes. Taxis are more expensive, while buses are cheaper but will not take you the whole way up. Entry to Monte Albán is 57 MXN (3.4 EUR) per person, which seems to be the approved sum for any archeological site in Mexico.