Chocolate and mezcal in Oaxaca

The city of Oaxaca, capital of the state of the same name, sits on a flat valley adorned with agave plants and lush greenery. We took the ADO bus from San Andrés Cholula, on a journey mimicked by many other tourists. They arrive for Oaxaca’s rich gastronomy, large amount of mezcal bars and close proximity to ancient sites such as Monte Albán and Mitla.

Oaxaca itself is a colorful gem with much to offer to the casual traveler. Its roads are easily navigated, with most sights within walking distance. Like other charming cities we’ve visited in Mexico, it is teeming with vivid colonial-era buildings and old churches, commonly circling the area known as the historical center. Oaxaca’s Zócalo displays plenty of restaurants, little shops and markets, while also being the meeting point for political demonstrations and traditional celebrations.

We visited Oaxaca in early July, when preparations for the Guelaguetza cultural festival had already begun in earnest. Meandering through the Zócalo on a Friday evening, we stumbled upon towering papier-mâché puppets and many locals dressed in traditional garbs, dancing to Oaxacan music in what seemed to be a rehearsal for the real thing taking place in late July. 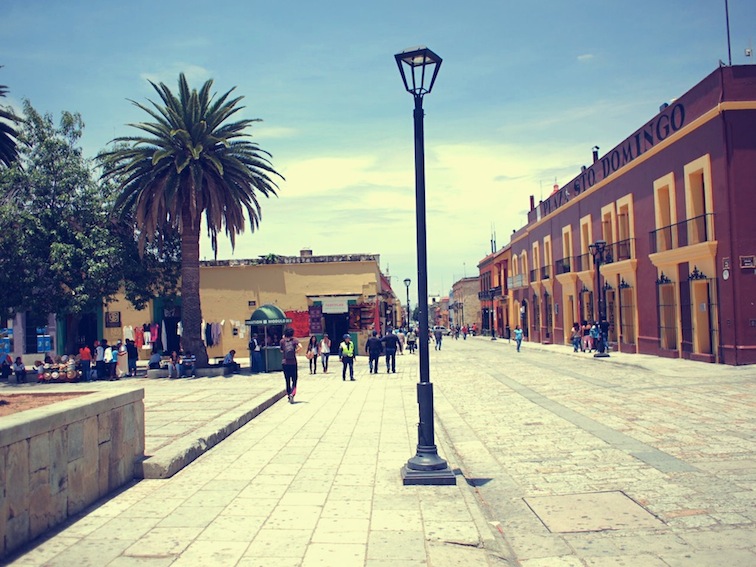 The Zócalo in Oaxaca

Tradition is palpable everywhere in Oaxaca, and one of its most renowned facets can be found just by following your nose. Oaxacan gastronomy is famous throughout Mexico – with good reason, we might add. Amongst the culinary mainstays of Oaxaca, three examples stood out for us: quesillo, mole and chocolate. 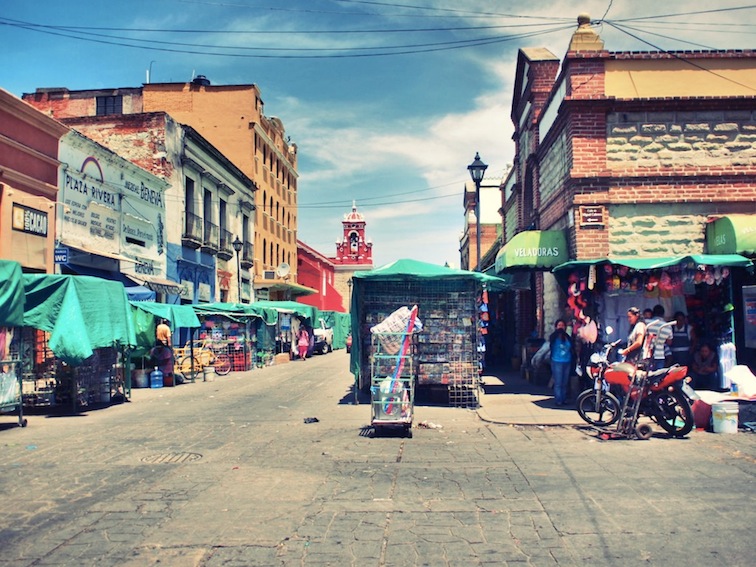 By the Benito Juárez Market

Quesillo is a stringy white cheese typical to the region. We tried it often, mostly in quesadillas with “flor de calabaza”, to the extent that we may have developed an addiction. It gives the quesadillas a distinctive taste, particularly while they are steaming hot.

Mole is a complex chili-based sauce with origins in the confluence of Spanish and Arabic cuisine. Oaxacan mole is noted both for its variety and downright deliciousness, its rich flavor aided by a generous mix of dark chocolate. Alas, mole is ubiquitously combined with meat, making it a bit of a forbidden fruit for vegetarians. However, it can be found as an accompaniment to rice or inside tacos. If uncertain, you can always ask for a taste, making sure to note it should not be tainted by meat sauce. You’ll probably need to emphasize that means chicken too. A good place to find mole in its original paste form is the Benito Juárez market, where they are usually displayed in thick mounds of varying colors.

As for chocolate, a quick stroll through Mina street, near the Zócalo, will already give the sweet-toothed visitor an olfactory hint to its significance in Oaxacan culture. Long before the Spanish arrived, cacao seeds were used as currency, while chocolate was used not only as food but also as medicine. 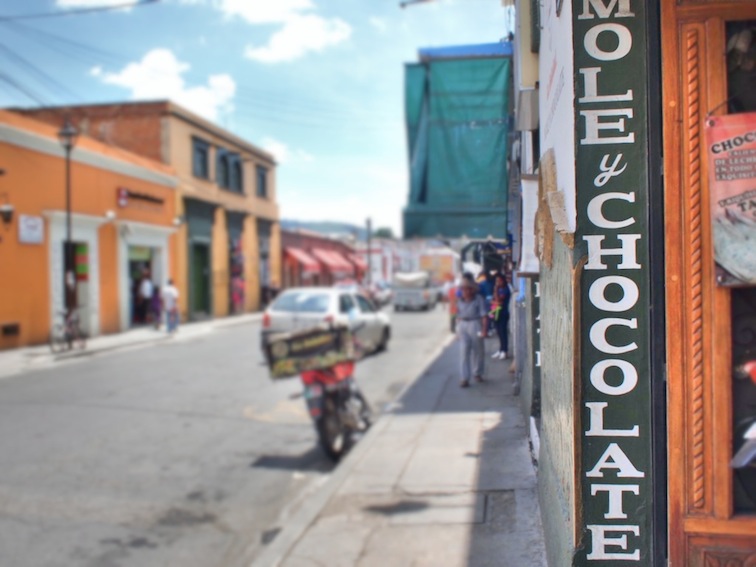 Today, there is no denying the medicinal properties of a hot cup of chocolate, served in a clay mug and partnered with sweet egg bread – at least, that’s what we kept telling ourselves as we went for the third serving. Along Mina street, several producers sell their wares through open doors, while also providing a glimpse into how chocolate is prepared.

Where the chocolate magic happens

We couldn’t leave our brief guide to Oaxacan gastronomy without mentioning tlayudas and chapulines. The first are known as “Oaxacan pizzas”, and are basically large tortillas topped with cheese, beans, lard, and a diverse assortment of vegetables. Again, meat is also a preferred ingredient, so use caution if not inclined to spoil years of vegetarian sustenance. The latter are fried grasshoppers, usually spicy and eaten as a snack – like peanuts, but crunchier. We tried chapulines with a side of orange, and found the mixture quite pleasing, since the orange juice cut the sometimes overpowering chile. 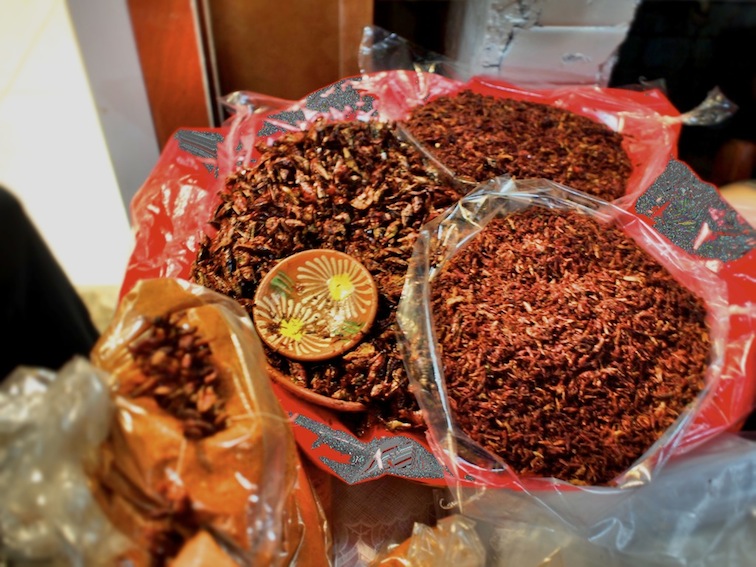 A favorite food spot of ours can be found by the Conzatti Garden, in the northern part of the historical center. La Hormiga is a stand selling tasty fast food, namely tortas (basically sandwiches). Yet again, meat abounds, but we indulged on lavish cheese tortas, prepared on the spot and filled with quesillo, avocado, tomato and chile. We love street food when it’s done right, and La Hormiga does it tremendously well.

Apart from healthy doses of hot chocolate, we also had a sip of mezcal in Oaxaca. As with pulque, which we had tried in San Andrés Cholula, mezcal is made from a species of maguey (agave), although it has far more alcoholic content than pulque. A few of the more eminent “mezcalerías” are situated along the Macedonio Alcalá corridor, a pedestrian street which crosses through town towards the Zócalo and is lined with museums and great churches such as Santo Doming de Guzmán.

The Mezcalería Los Amantes, on Allende street, is quite often full to the brim with mezcal aficionados, eagerly trying the several types on offer. Next to it stands Casa Crespo, which besides mezcal also sells an enormous variety of chocolate. We had a quick chocolate tasting while visiting (orange, chile, cacao flower, etc), finally settling on a pack of supremely succulent lemon verbena chocolate. Casa Crespo’s terrace, boasting a great view of Santo Doming de Guzmán, was a lovely setting for an afternoon enjoying a few cups of mezcal. 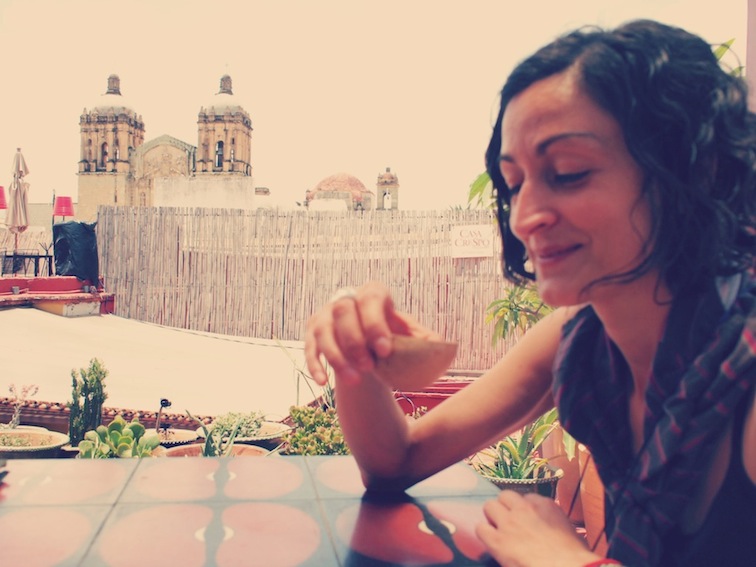 We did two day trips outside of Oaxaca: one was to the archeological site of Monte Albán and the other to the Sunday market in Tlacolula, a neighboring village 20 minutes away from Oaxaca by car. We took a shared taxi, or “colectivo”, from the Periferico avenue, the entire trip costing 40 MXN (2.4 EUR) each.

The Tlacolula market boasts an enormous variety of foodstuffs and handcrafts, while being one of the places where it is possible to taste “tejate”, an indigenous drink prepared with corn, cacao, cacao flower and seeds of the mamey fruit. The market is a festival of the senses, still retaining much of the indigenous culture responsible for the ebullient atmosphere permeating the region of Oaxaca. 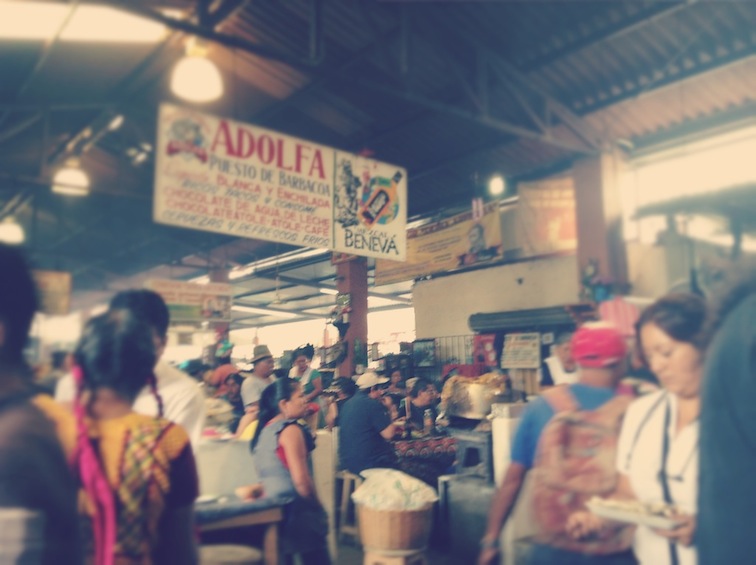 The city of Oaxaca relies heavily on tourism, and visitors keep flocking to its delightful embrace for many reasons. Harmoniously combining old colonial exuberance with a vibrant gastronomy and welcoming weather, Oaxaca will hopefully continue to be a favored destination and cultural haven for many years to come (the Historic Center of Oaxaca, together with Monte Albán, is a UNESCO World Heritage Site).

We felt safe, warm and satiated, having tried only a fragment of what the region has to offer. Departing our comfortable base, the Azul Cielo Hostel, we continued our trip with the whiff of cacao still lingering in our contented bodies, a fragrant reminder of only one of the many splendorous sides of Oaxaca, a treasure in the foothills of the Sierra Madre. 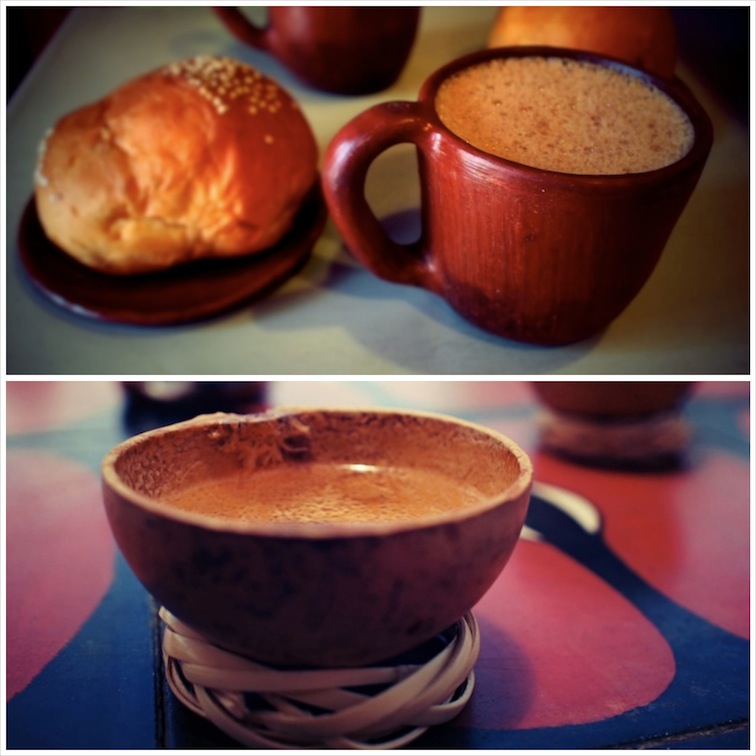 Chocolate and mezcal in Oaxaca