A Tale of Two Cholulas

The first thing to know about the city of Cholula is that it contains two municipalities: San Andrés and San Pedro. One immediately follows the other, and any defined border is not immediately visible to the casual visitor, although they have been divided since pre-Hispanic times. This means that, for all practical purposes, Cholula is actually two places. It is advisable to know which Cholula you are getting into, particularly if traveling – buses and taxis will make the distinction, and if not willing to drive around in circles or spend more pesos than necessary, it’s best to be familiar with it.

Cholula is located in the state of Puebla, and only 8 km away from the city of, hum… Puebla, the fourth largest city in Mexico and a major industrial hub. As it may be apparent from this short summary, geographical nomenclature is a tad confusing in Mexico.

San Andrés Cholula is on the eastern side and its main claim to notoriety is the Great Pyramid of Cholula. It also houses more indigenous people, who have to share their quiet streets and quaint “tienditas” with a vibrant party scene, courtesy of the many youngsters studying at Universidad de las Américas Puebla (UDLAP).

San Pedro Cholula is more commercial and therefore richer, while also having more infrastructure catering to tourists. Its main landmark is the San Gabriel monastery, seemingly built on top of an ancient Quetzalcoatl Temple. Architecturally, San Pedro is more similar to other Mexican towns with a visible colonial legacy – churches abound, while old buildings are usually brightly colored, lending the shop-strewn streets a picturesque symmetry. 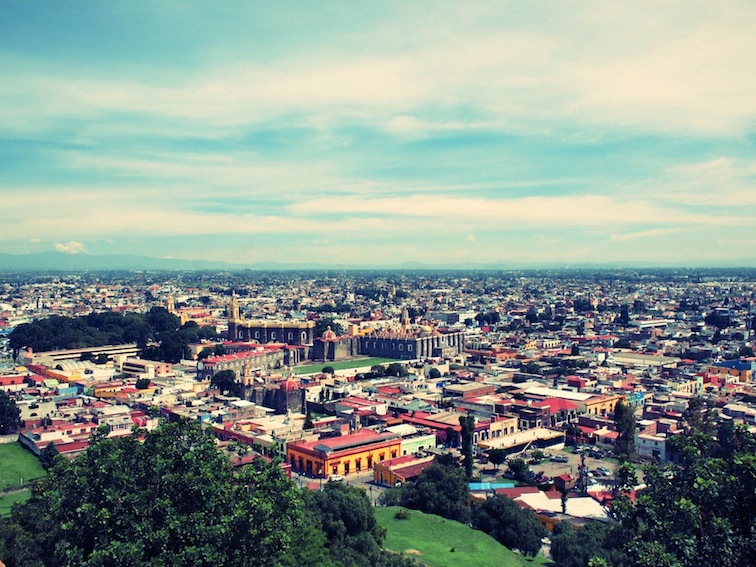 Our good friends Enrique and Tamara were already installed in San Andrés Cholula, so that became our favored destination. Through them, we got acquainted with some of Central Mexico’s fascinating hues and flavors, thus ensuring a blissfully relaxing introduction to our long trek through Latin America, going South.

The artisanal flavors of Cholula

Like many other developing countries, Mexico is now flooded with North-American fast food joints. The usual suspects found a welcoming population, one whose traditional gastronomy, albeit rich and varied, is at times unable to compete with the marketing skills of powerful food emporiums. The blowback to this trend is resting on the shoulders of entrepreneurs who have gone back to the original sources of Mexican cuisine and made it available to a whole new generation of discerning consumers.

Apart from the ridiculously cheap little gems hidden along Calle 14 Oriente, selling delicious tortas, tamales and quesadillas amidst a plethora of discos, bars and sushi (?!) restaurants, we became acquainted with a few places providing artisanal cookery and organic products.

In Atzala street, behind brown wooden doors, lies the grocery El Artesano, where Don Rafael sells his locally produced wares. Being a firm believer in sustainability, his shelves are lined with multicolored organic treats, from amaranth cookies and mesquite honey to gluten-free pasta and bread. We became absolutely enamored of El Artesano’s fresh yogurts (guava and pineapple/coconut were to die for) and delectable ice cream made from the mamey fruit.

Our regular meals were either made at home, prepared with fruits and vegetables from small local “tienditas”, or done by professional hands at one of the many local eateries, where we could taste two gigantic quesadillas with mushrooms, cheese and “flor de calabaza”, a large dose of scrambled eggs with vegetables and two fresh carrot juices for 80 MXN (4.7 EUR). 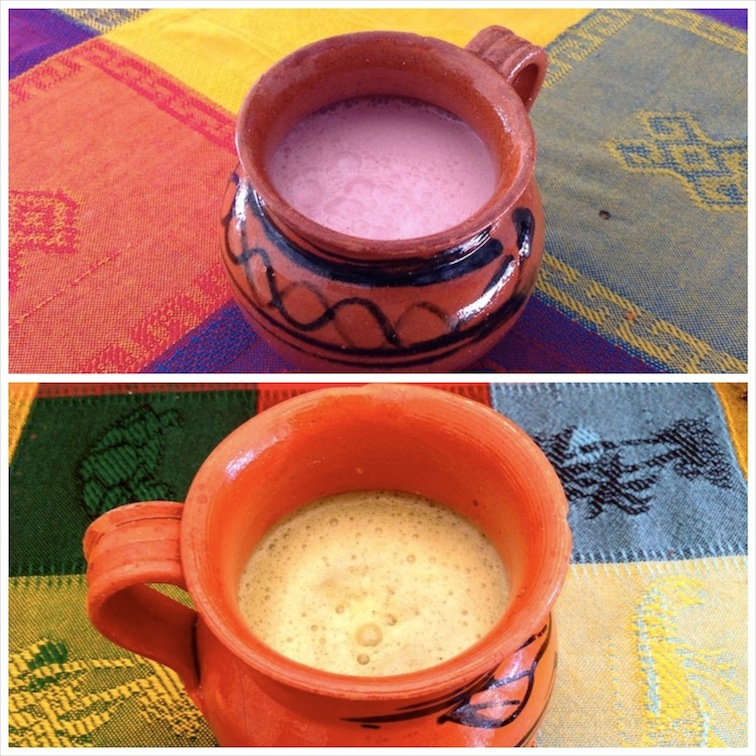 However, and after a hearty recommendation from our friends, we headed past the Great Pyramid and into the first few streets of San Pedro Cholula, where we entered the wondrous world of Koatlikue Pachamama. This quaint restaurant deals in pre-Hispanic gastronomy, and is therefore fully vegetarian. From our first sip of “tlaxke”, their homemade drink of yogurt and fruit, we could already tell we would be returning soon. Very soon. As in, tomorrow. Every single dish is splendidly scrumptious, the staff is very friendly and everything is remarkably inexpensive. The owner, Don Israel, is an advocate of slow food, so meals take their time to arrive. However, the short wait is more than worthwhile. 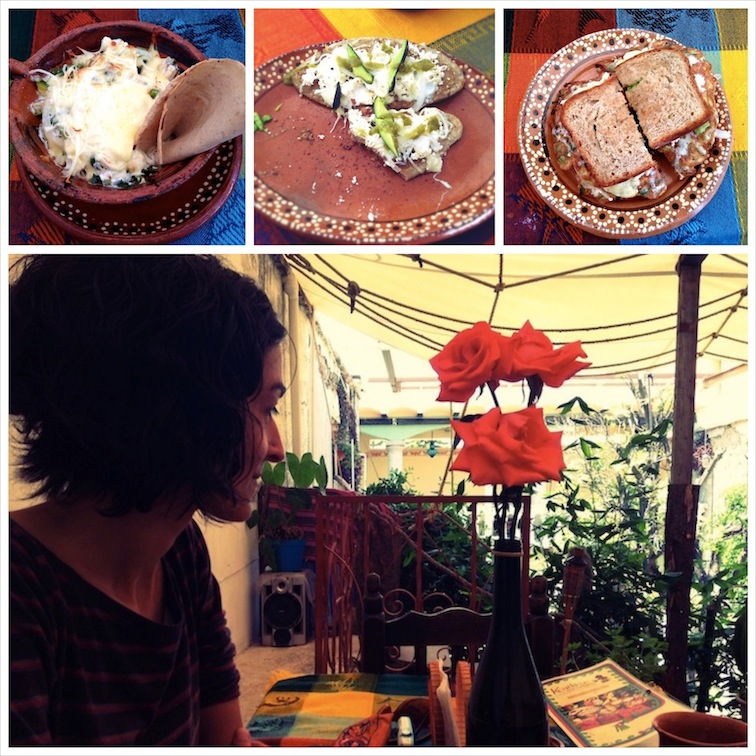 A special reference goes to Draft Fine Food and Craft Beer, a budding gastropub in Puebla. Although located 15 minutes from Cholula by taxi, we made a few excursions there, to taste their vast offer of artisanal beers and their mouthwateringly delicate food. We had some of the best calamares we have ever tried, expertly made and accompanied by a gorgeous mango chutney. We’ve also attended a cheese tasting, where different types of cheese were paired with specific kinds of beer, all under the supervision of hospitable owners Carlos and Zianya. For first time guests, we recommend the fish tacos and the “papas bravas” – not only tasty but also really good with Chupacabra beer. 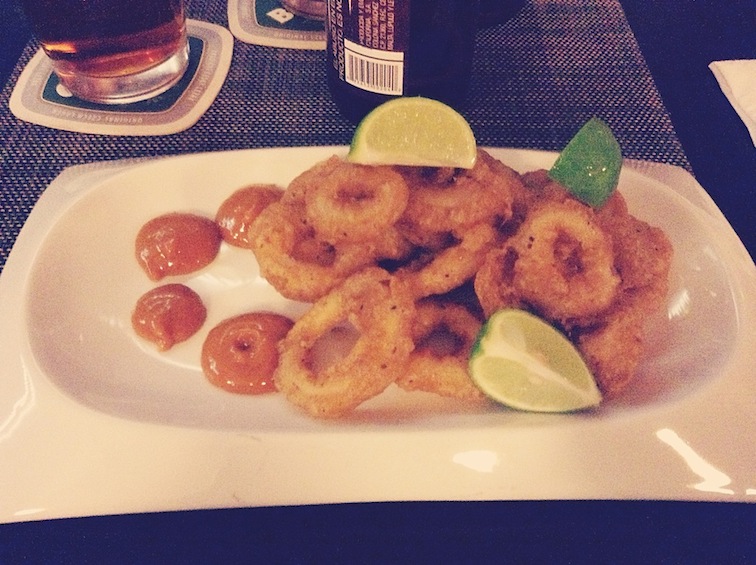 Even if beer is the favored drink in Mexico, with the occasional slip into mezcal or tequila, there is an old staple of Mesoamerican culture which has been making a comeback. Its name is pulque, and it’s a light alcoholic beverage made from the fermented sap of the maguey plant, commonly known as agave. It is served either in its original form or “curado”, where fruit and bee honey are added. The original version is white and displays several levels of viscosity, whereas the “curado” has a more liquid form. Although we appreciated the white pulque, we quickly became huge fans of “curado”, lemon begin our preferred taste. Once the thermometers start rising, there’s nothing better than a large batch of pulque to idle some hours away. 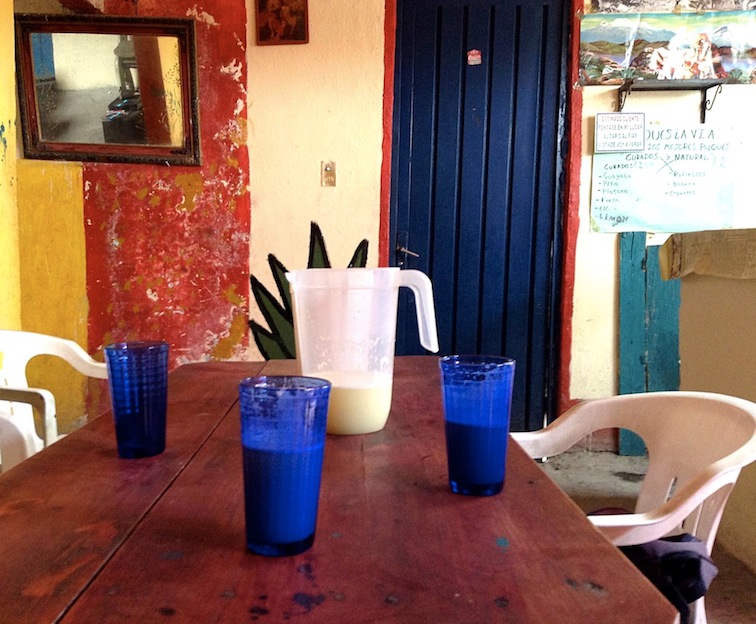 The Great Pyramid of Cholula

As previously mentioned, San Andrés boasts an impressive pyramid amongst its landmarks. The Great Pyramid of Cholula is the largest monument ever built in the world, its base being four times the size of the Great Pyramid of Giza. In Pre-Columbian times, it stood as a sacred site of the utmost importance to its native inhabitants. Over many centuries, consecutive layers were added to the original construction, eventually turning it into a now mostly hidden behemoth. 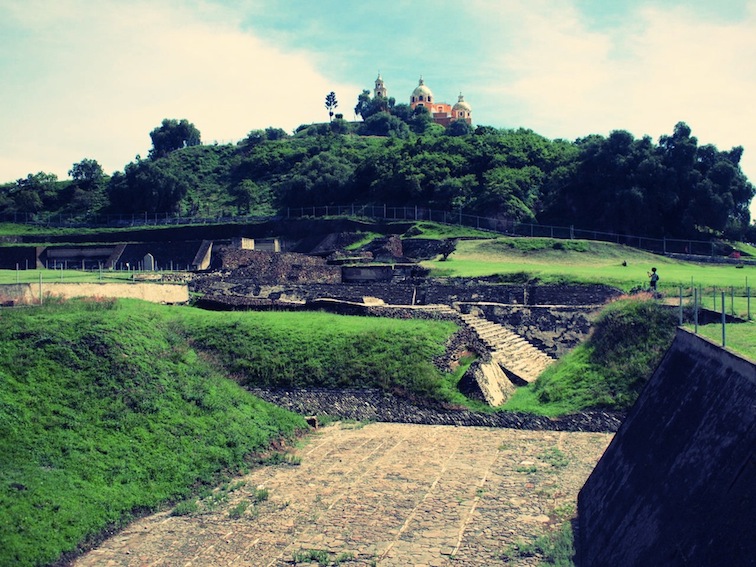 Unlike other famous temples such as Chichen Itza, Teotihuacán or Angkor Wat, to gauge the immensity of the Great Pyramid of Cholula takes a bit of imagination. As it descended into decline, the surrounding landscape began to encroach upon it, until only a few scattered remains were left visible. Furthermore, adding insult to injury, the Spanish built a large church on top of it, dedicated to the Virgin of the Remedies. This is today a significant site of pilgrimage for the mostly Catholic population inhabiting the region. 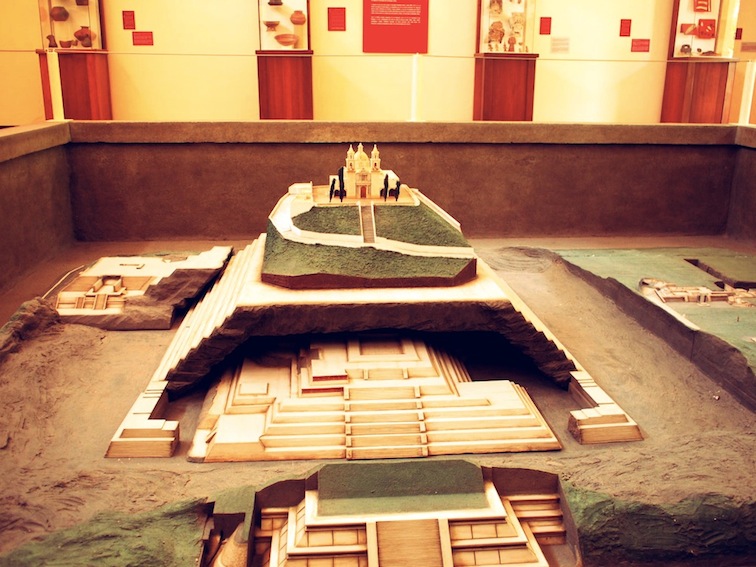 Model of the Great Pyramid of Cholula. It’s big.

A small sense of the pyramid’s intricate vastness can be ascertained by taking a tour through its tunnels. Although 8 km have been dug by archeologists, only 800 metros are open to the general public. Nonetheless, their claustrophobic atmosphere is a worthy visit, helping to fill some of the gaps erected (or destroyed) by the passing of the centuries above ground.

Tunnel beneath the Great Pyramid of Cholula

Whims of constant weather in Cholula

San Andrés Cholula is easily discovered at the wheels of a bike. Walking is fine too, but riding a bike makes everything speedier and more comfortable. We did our cultural tours, shopping and sightseeing atop a saddle, meandering through Cholula’s streets and dirt roads, riding at a leisurely pace and usually under a balmy sun. Which leads me to the weather in Cholula… 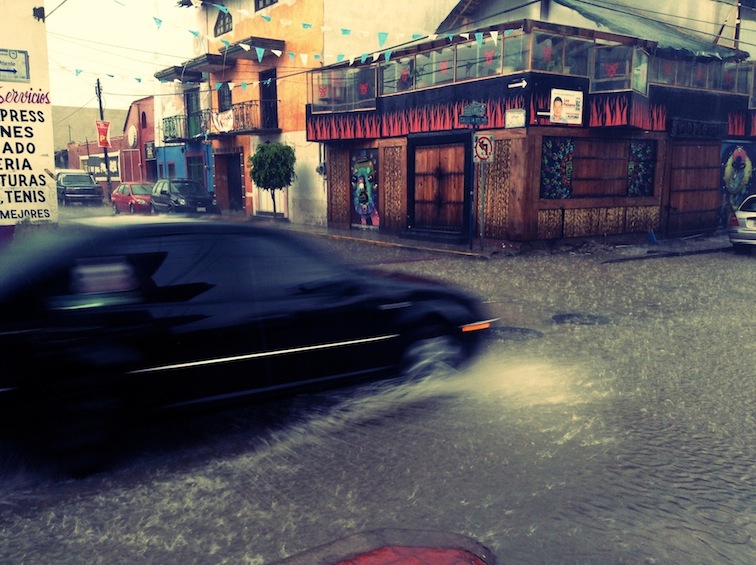 We arrived in Mexico during the rainy season. Our first day in the D.F. was spent hiding from the rain, and not much changed the following day in Cholula. However, during the two weeks we spent in San Andrés, the weather became surprisingly lovely, and markedly constant. Every day would follow the same pattern: a dewy morning would become a sunny midday, at which point scattered thin clouds would begin to congest the skies, finally breaking down into thunderous rain and lightning around 18h, making everyone run for cover. A couple of hours later, the rain would subside, just in time for the partygoers to gather along Calle 14 Oriente or Container City, ready to embrace the now alcoholic deluge. 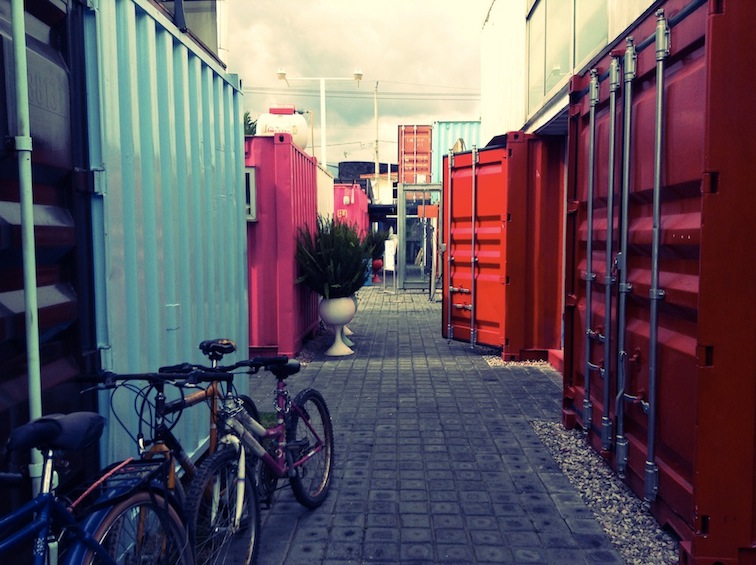 Container City: within lies much merriment

The legend of Popocatépetl and Iztaccíhuatl

Under such reliable meteorological conditions, we could plan our day almost to the hour. It also meant we were graced with stunning views of volcanoes Popocatépetl and Iztaccíhuatl in the morning, as we ambled through the flat plains of the Valley of Puebla. The two volcanoes, the first active and the latter dormant, are featured as star-crossed lovers in Aztec mythology.

Popocatépetl and Iztaccíhuatl in the background

Legend has it the warrior Popocatépetl and the princess Iztaccíhuatl fell in love. In a classical twist, the father of the hypothetical bride did not approve of the relationship, and sent Popocatépetl on a hopefully ruinous expedition to Oaxaca, promising his daughter’s hand in marriage as soon as he returned. Not wanting to tempt fate, the father later assured Iztaccíhuatl of Popocatépetl’s untimely demise in a heated battle, even though he had heard of no such thing. As befits a romantic character, Iztaccíhuatl promptly died of grief. The father’s role is assigned to a spurned lover in other versions, but the gist of the story pretty much remains the same.

Once returned victorious from the war, Popocatépetl was unsurprisingly displeased at the turn of events. Forlorn and forsaken, Popocatépetl took his lover’s limp body and built her a gigantic tomb in the shape of a mountain, where he kept watch until both of them became volcanoes covered in snow. Iztaccíhuatl ultimately became known as the Sleeping Woman, resting in eternal peace as Popocatépetl continues to spew angry fires of thwarted passion. 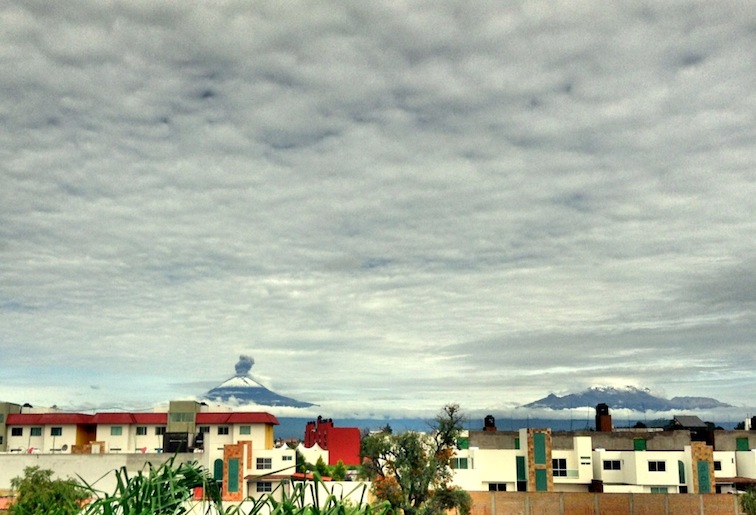 El Popo erupts in a fit of geological passion

True to legend, Popocatépetl, colloquially know as El Popo, has been showing increasing signs of activity for the past year or so. During our stay, we witnessed dark plumes of volcanic ash rising from its crater, a striking spectacle made even more uncanny by its closeness to us. As two vagabonds experiencing the many wonders of Central Mexico, we could hope for no better setting than Cholula, guided as we were by the providential advice and friendship of Enrique and Tamara. To them both we dedicate this rambling post, with warm wishes of good fortune in their own adventures.