Angkor Wat and the Temples of Siem Reap

What is Angkor Wat?

Wandering through Cambodia, it was difficult not to be reminded of the human violence which had plagued it for too many years. Its people were a constant reminder, touting every Khmer Rouge atrocity as a potential tourist experience. However, the main purpose of the trip was not the near past, but the one which had been hidden for centuries.

The grandiose past of the Khmer finds no better representation than in the majestic solitude of Angkor Wat. Its corridors are still empty pathways to a sacred place within ourselves, stretching maze-like as veins irrigating our core. 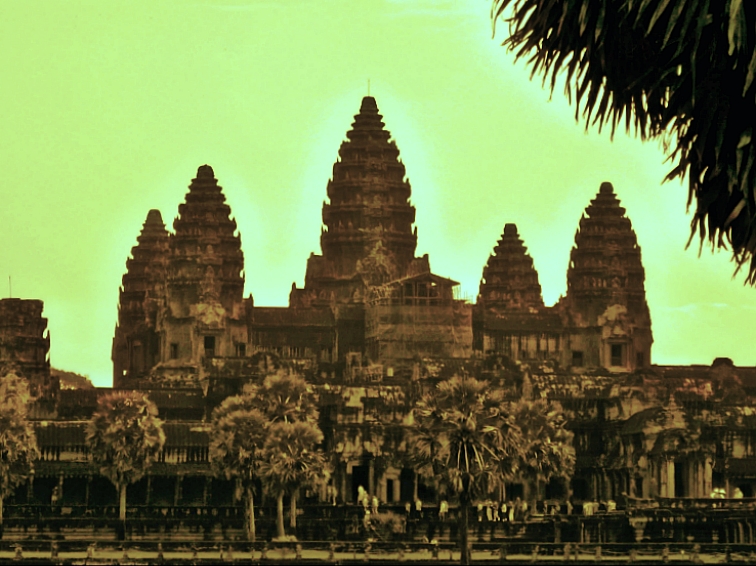 We were based in Siem Reap, an until fairly recently sleepy little town which is nowadays the main gateway to Angkor Wat and the surrounding temples. With the increased visibility (and visitor numbers) of Angkor Wat, Siem Reap is booming.

As expected, that’s not a particularly good sign. It still has an aura of quaint French colonial hamlet, but the frenetic sounds of Western pop music bouncing off the bars on Pub Street tend to put the mind off any hint of exoticism rather quickly. Also, there’s always Cambodia’s recent history picking at the back of your head. Nevertheless, it retains a certain charm. The Night Market can be fun and it’s easy to walk anywhere, so there’s not much need for tuk-tuk rides. 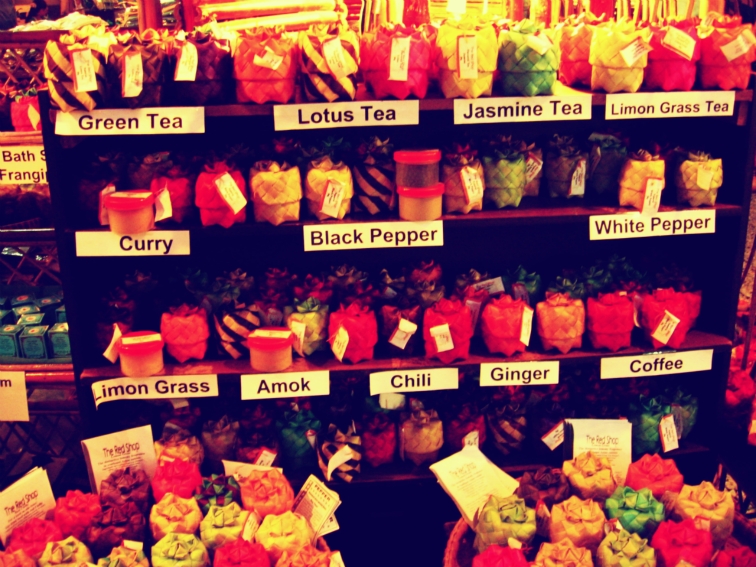 Of course, this changes when the goal is to visit the temples of Angkor Wat and environs. The ridiculously luxurious hotels sprouting every other way towards the city of temples will in all likelihood provide private transportation, but for those on a more restrained budget a good tuk-tuk driver is the way to go. Negotiation is in order, but it’s relatively easy to get a reasonable daily price.

We lucked out not only with the driver but also with the weather. In October, the skies were of a radiant blue and the tuk-tuk rides, although dusty, were tremendous fun. Since we were on our own (party of two!), we could arrange for a convenient pick-up time, go back home for a nap around noon (when sun was scorching) and later, more refreshed, get back on the road. 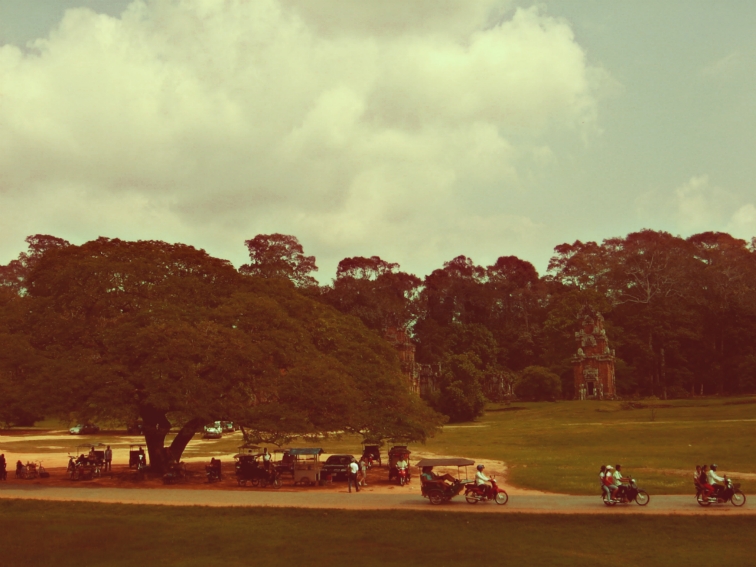 The obvious tip: wake up early. Luckily, a lot of the backpacker crowd is left recovering from any given night’s exertions, while the more sophisticated excursionists will probably need their beauty sleep, which leaves plenty of time to get on your tuk-tuk and see an almost deserted Angkor Wat. We woke up at 6am and were gawking at the utter sublimity of Angkor Wat before 7am. 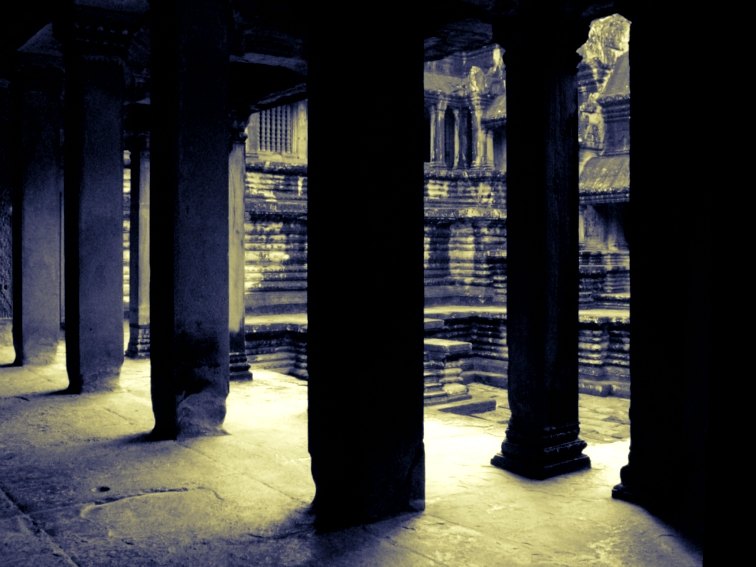 There’s not much to add to everything already said about the rediscovered temple-mountain of Khmer civilization. It’s supremely beautiful and immense. There was already a minor crowd forming outside, so we walked past the grand moat and its terrace into the imposing central structure. We got lost in its corridors, going from grey walls to green paths, climbing again dilapidated stairs into the luminescent womb of Angkor Wat. At one point, we stumbled upon a gentle old monk creating red wool bracelets by a sunny column. Strangely, the vivid red and the monk’s open smile matched perfectly with the splendid decay around us. 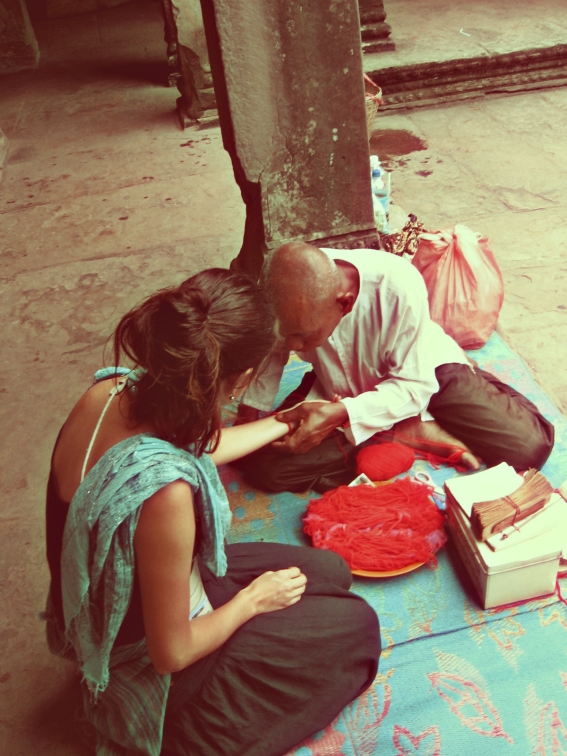 Elle with monk and red bracelets

Exploring further, we were entranced by the myriad sculptures of Apsaras, the ever-dancing nymphs, lining vast corridors also populated by linga stands. Symbolism permeates every nook and cranny of Angkor Wat, and when not overwhelmed by the magnitude of the temple we became fixated in the many detailed bas reliefs and monstrous kalas, continuously warding off evil. 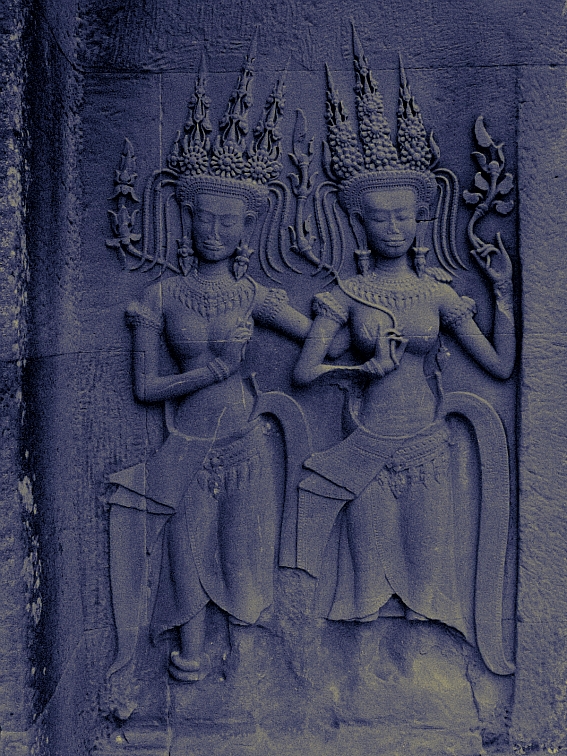 The incredible struggle to recover Angkor Wat from inevitable decrepitude continues to this day. Roaming through its entrails, a sense of calamity is never completely absent, a sentiment echoed while sweating inside the Great Pyramid of Khufu.

Albeit thoroughly bewitching in its state, it’s impossible not to consider its demise. It has lasted centuries, but it’s hard to tell how longer its towers will stand, glorious as they still are against the clear skies.

Although this enormous temple has been regained from the lazy hunger of nature, others close to it have begun their embrace of the regenerative cycle: wood has become stronger than stone, walls have been crushed under canopies, ancient square lines lay scattered by serpentine vines, grey finally disappearing into a belly of green.

Roots and tree trunks are now rulers of Ta Prohm. Here, the translucent presence of nature’s grip has become visible.

Silk cotton trees have embraced the ruins, and what was once a thriving example of human resourcefulness and engineering is nowadays a hunched temple surrounded by jungle. Although this has apparently begun to change, with cleanups and facelifts offering a more sanitized landscape to increasing throngs of tourists, its violence still lingers.

This violence is not of Hollywood, but of our history and our bodies; it is the brutal realization of how our strength can be and will always be easily broken by the moon, the sea and the earth. This is about the ultimate violence – death, that most profound of mysteries. 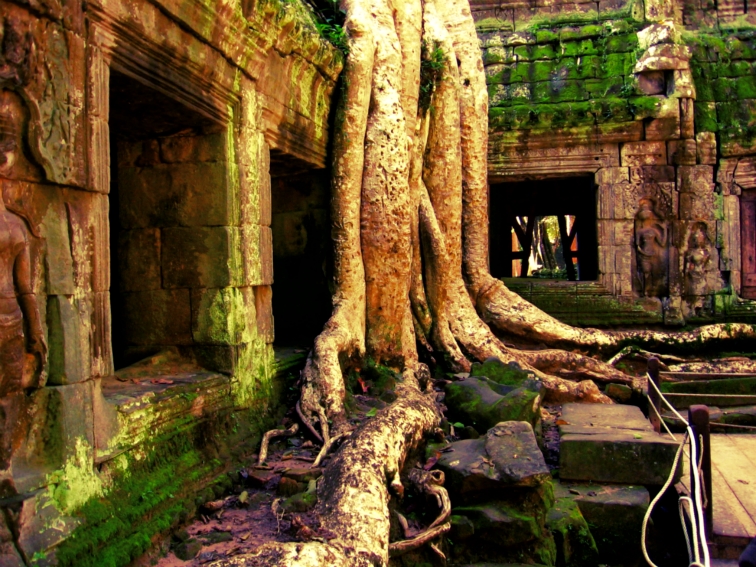 The roots of Ta Prohm

Nevertheless, Ta Phrom is experiencing its own resurrection, as it becomes increasingly renowned as the temple the jungle tried to claw back. The tree trunks squeezing the ancient stone make for an uncanny sight – albeit one becoming increasingly manicured. Yet, the temple is quite big, and there are still deserted spaces available to the occasional sightseer. Circling its main structure, we could see and feel the jungle’s inconspicuous withdrawal. Its emissaries are nevertheless regularly foraging through crumbled walls, as we spotted long, thin snakes slithering to their inner sanctum. 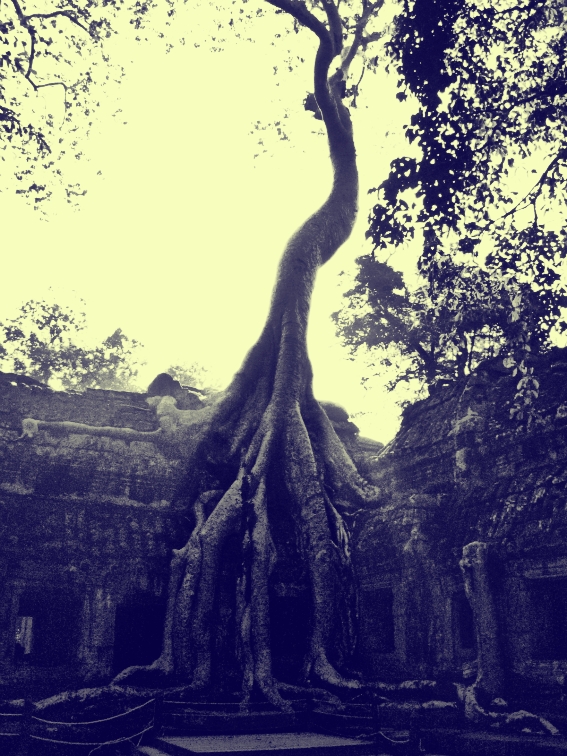 Usually included in a trip to Angkor Wat is a stop by the old Khmer capital Angkor Thom. Its entrances only are worth a visit. The most popular one is Victory Gate. You pass under a triangular arch topped by the sculpted face of Avalokitesvara, and can stop to admire the statues of Nagas (multi-headed serpents) along its guardrails. 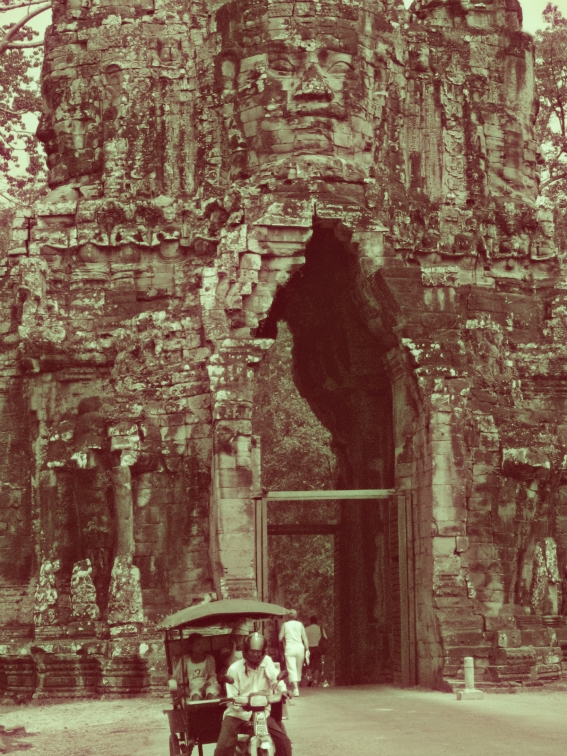 Bayon is probably Angkor Thom’s most recognizable temple. Adorning its towers are 216 gigantic faces, giving it an atmosphere of eerie serenity. 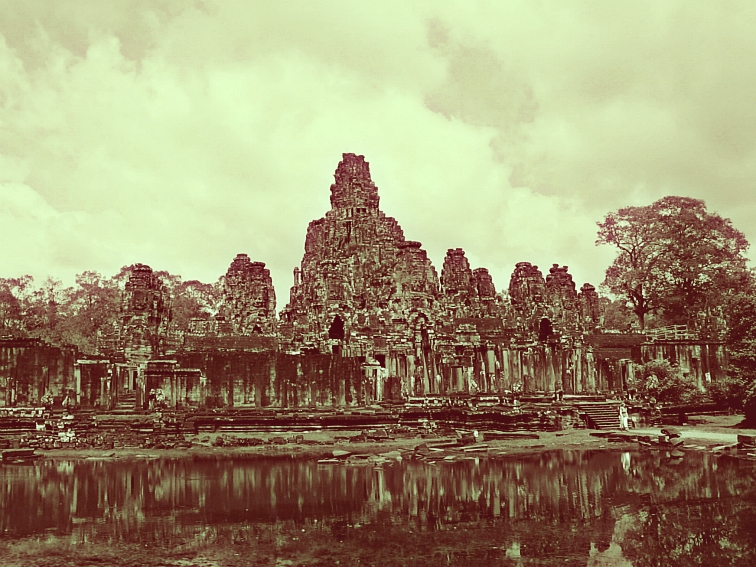 Baphuon and its reclining Buddha is a short hop away. Although once one of Angkor’s largest structures, it now lacks the impressive grandeur of the more renowned sites. Worthy of a visit though.

Pre Rup, still climbable and with gorgeous views of the luscious surrounding jungle, is a temple dedicated to the Hindu god Shiva. Its features are still remarkable, and its mud-colored towers contrast beautifully with the landscape. 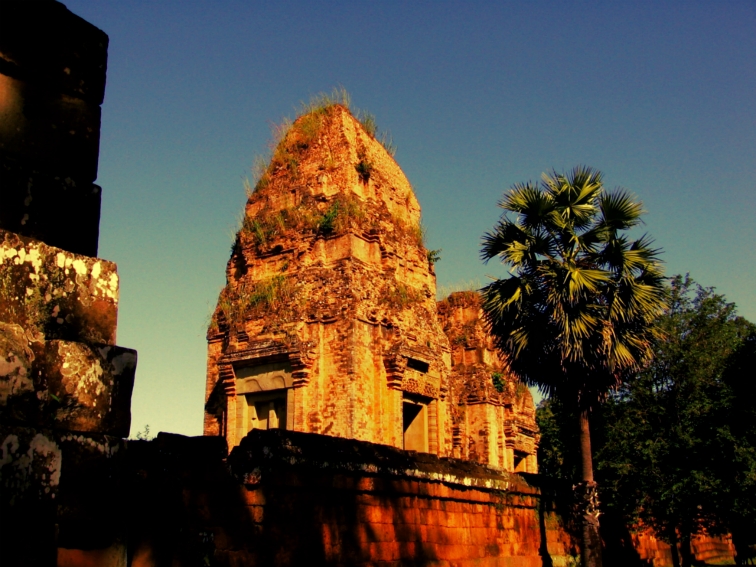 Preah Khan is similar to Ta Prohm in its state of near wilderness. However, and unlike Ta Prohm, it has been mostly spared from restoration work and is therefore on the brink of collapse. 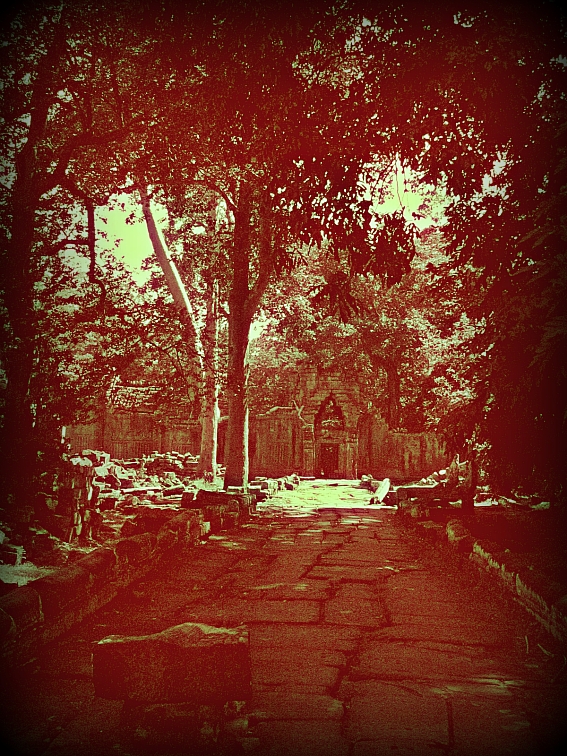 Preah Khan, swallowed by the jungle

So what is Angkor Wat? It could be said it’s a magnificent temple in the middle of the Cambodian jungle. It could also be noted there are other temples worthy of admiration in its near vicinity. It may be an ancient structure providing a source of pride and historical context to a nation decimated by fraternal genocide. It’s also a a UNESCO World Heritage site since 1992.

Above all else, it’s a reminder of the continuous struggle between chiseled stone and unbridled nature; between humanity’s will to conquer death and the timeless futility of such endeavor. It’s supremely beautiful and will not last forever. 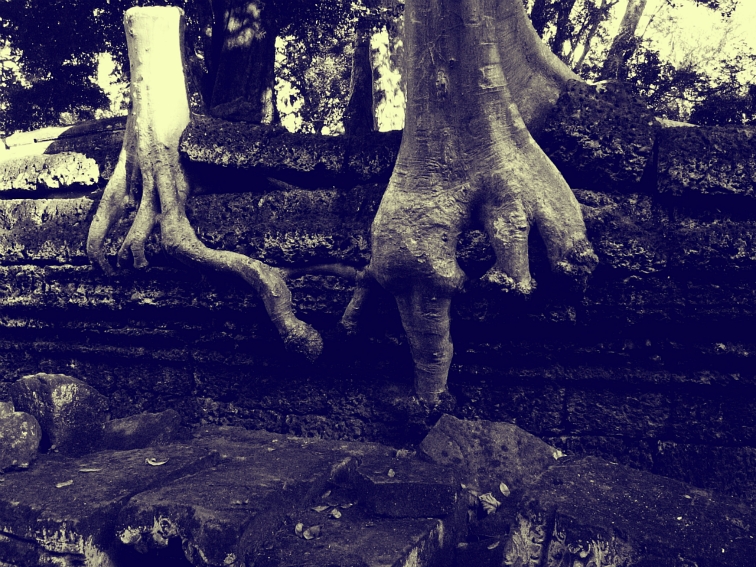 Clawing the stone back