About Egypt and a Sense of Timing

On the 21st of January 2011 we traveled to Cairo to do what millions of other tourists have done for thousands of years: see the Pyramids of Egypt. We would stay for a long weekend only, which we hoped would be enough to take in a few sights, taste some local food, talk to some people and perhaps visit Alexandria.

In all honesty, the main attraction was still getting a glimpse of the Giza Pyramids. We already knew about the misleading photos showing a solitary Great Pyramid of Khufu apparently rising from the endless desert, surrounded by nothing but boundless sand… and obviously eliminating the tumultuous city’s ever-approaching tentacles, which can now almost touch the Sphinx’s dusty paws. This knowledge was nevertheless not enough to drive us away from its ancient charms. 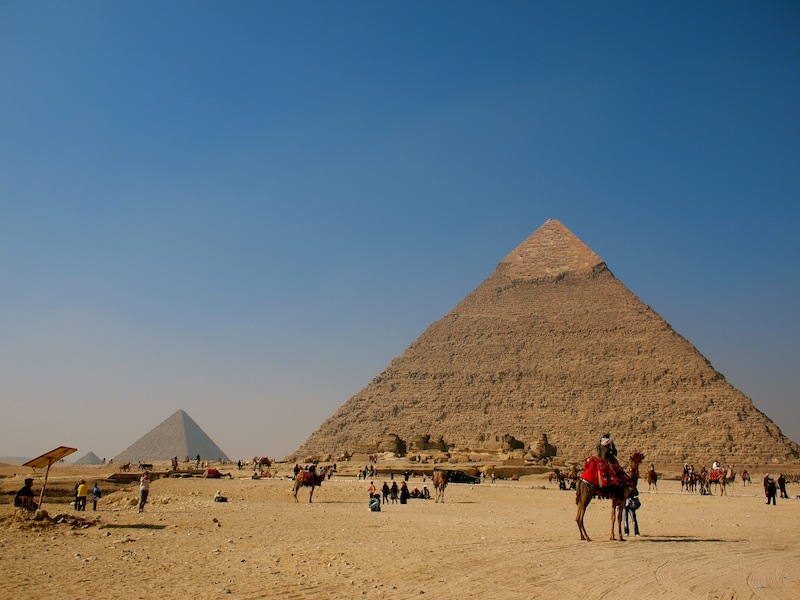 The Pyramid of Khafre

We stayed in a cheap hostel in Downtown/Midan Tarhir. The owners were relaxed and friendly, which sort of compensated for the general shabbiness of the place. Still, the tea was good and we were in the middle of Cairo – together with 17 million other people. Being of the adventurous sort, we decided to explore the city on foot. Although immense, our main points of interest were within reasonable walking distance.

On our first night we took a stroll by the Nile, a name which had a strong resonance for us, being equated with mystery and exoticism since early childhood. We were not fully prepared for the neon-lighted boats lining its banks, all engulfed in loud electronic music, but I guess teenagers need their fun too. We soon returned to the hostel, walking past the heavy traffic of Tahrir Square and into the Downtown maze. 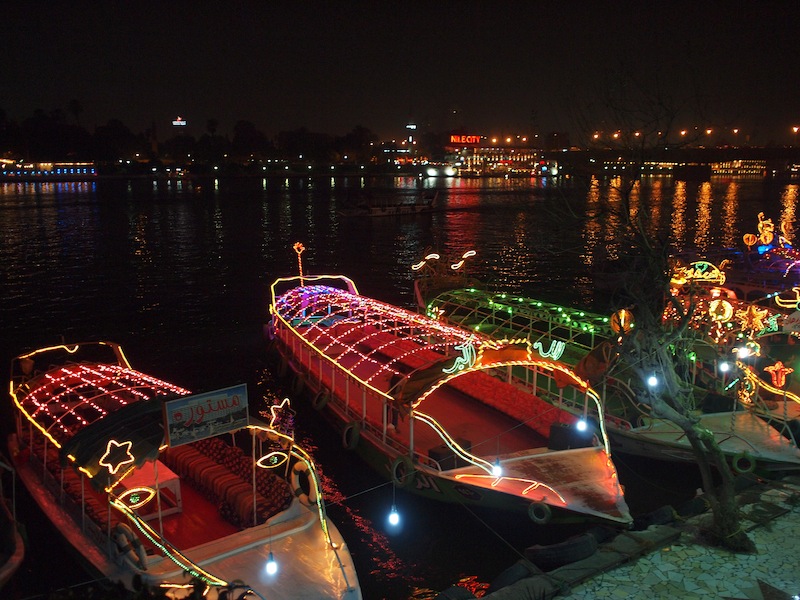 The first thing we noticed walking through Downtown Cairo (apart from the suffocating pollution) was the almost total absence of tourists. We saw them in private buses and taxis, but never on the street. We enjoyed our walks through sinewy alleys and grand avenues, especially whenever we managed to get hold of some freshly-squeezed sugarcane juice, but understand how that would not be everybody’s cup of tea… We thought it a shame though, mainly because the tourist trade was to our eyes non-existing in the area. The only cash to be had came from fellow Egyptians, who had little to begin with. Money seemed to be rushing by in air-conditioned buses… 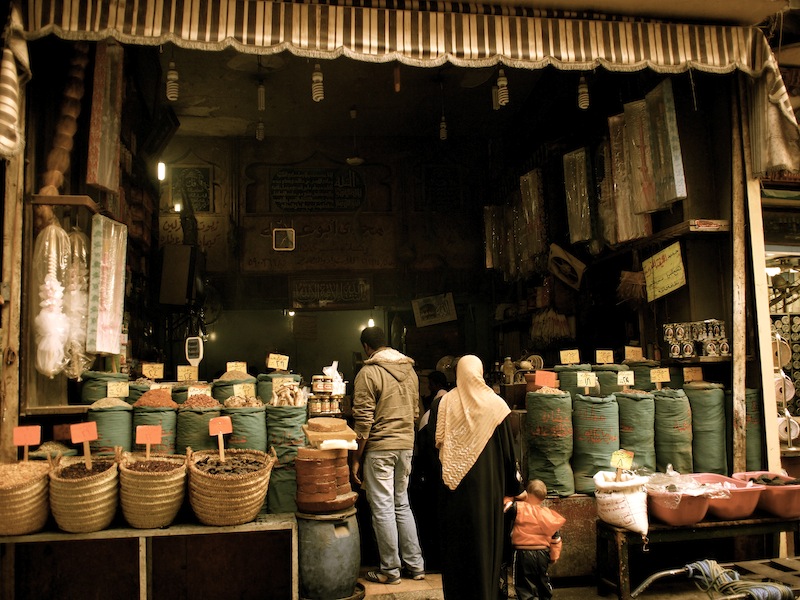 We took a cramped city bus to Giza, and walked a couple of km through Pyramids Road until we finally reached the desert plateau where one of the Seven Wonders of the Ancient World still stands, dilapidated yet magnificent. For all the hype (and the films, postcards, books, documentaries), it’s remarkably imposing and, yes, full of wonder.

Not even the aggressive touts scattered throughout its windswept area could dent the awe-inspiring – and humbling – experience of being close to a human-made construction which has withstood the devastating toll of time for approximately 5000 years.

At the time, the Pyramid of Khafre was undergoing renovation work and was therefore closed to the general public. However, it was possible to explore the entrails of the Great Pyramid of Khufu. Although crowded, claustrophobic, humid and steep, the climb through the Grand Gallery was emotionally overpowering. The numbers were just too mind-boggling – 5000 years! Human hands had devised and executed this gargantuan structure 5000 years ago! 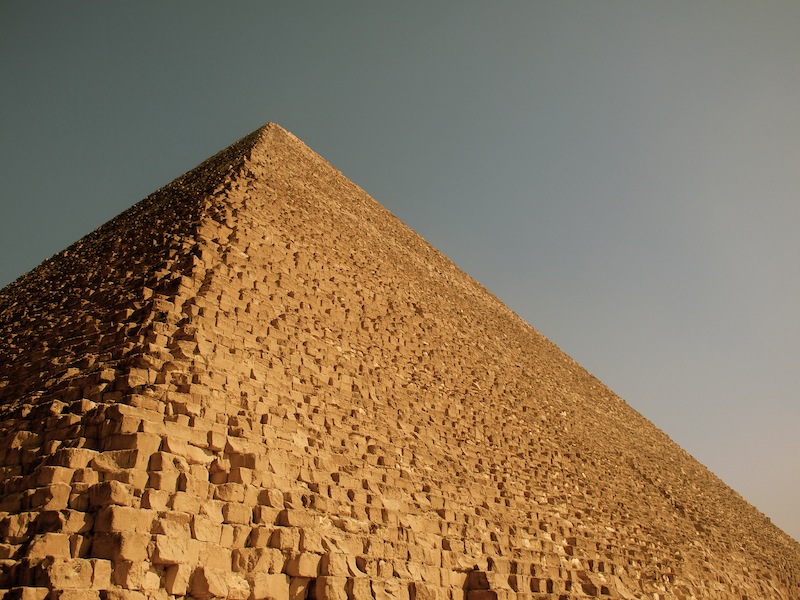 At the top, after crouching through a gap in the wall, is the King’s Chamber, already devoid of any treasure. However, its naked dark walls somehow made the room more dramatic and majestic. Even surrounded by other sweaty tourists, it was an unforgettable experience. 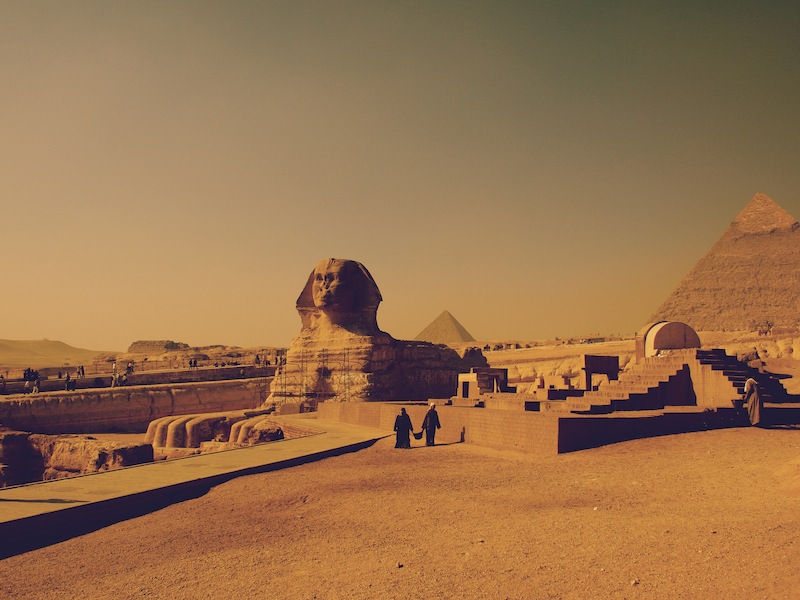 Outside, the January sun was almost blazing. Climbing down the entrance and looking up at the massive steps, it was difficult not to wonder how much longer it would be standing. Its quiet magnificence mirrors what we found in Angkor Wat and the Temples of Siem Reap or the Sigiriya rock fortress, and like those breathtaking places, it seems to be reaching a stage of spiraling decay from where it seems almost impossible to recover. The world is changing faster each passing day, and these irreplaceable mementos of our shared history are speeding to obliteration. For all their imposing might, it’s their current fragility which lingers in the memory…

Presently, the Giza Plateau is quite easy to walk through. Khafre, Khufu and Menkaure are close to each other, and the Sphinx is just down the road towards the city. There are constant calls for camel rides or tours, but after a bit of friendly assertion the touts tend to go in search of other prey. Due to this, it was possible to wander about in relative peace and appreciate the unclouded beauty of the monuments before us. 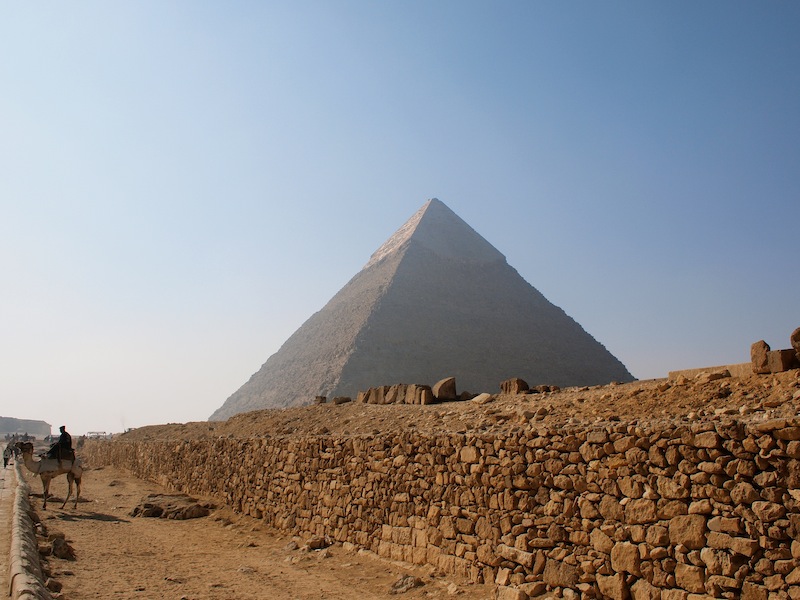 To see the treasures dug from the vast and fertile belly of the desert, we paid a visit to the Egyptian Museum. For all its disarray, it displays an impressive collection, which can be mostly viewed through the armpits of fellow tourists. “Crowded” would be something of a euphemism here…

One of the highlights is undoubtedly the Funerary mask of Tutankhamen, its golden luster somewhat dimmed by the passing of time and the constant swarm of gawkers encircling it. No cameras are allowed inside, which made for some funny moments. I’m referring mostly to the Japanese and Russian tourists trying to put their massive cameras into frustratingly small bags… 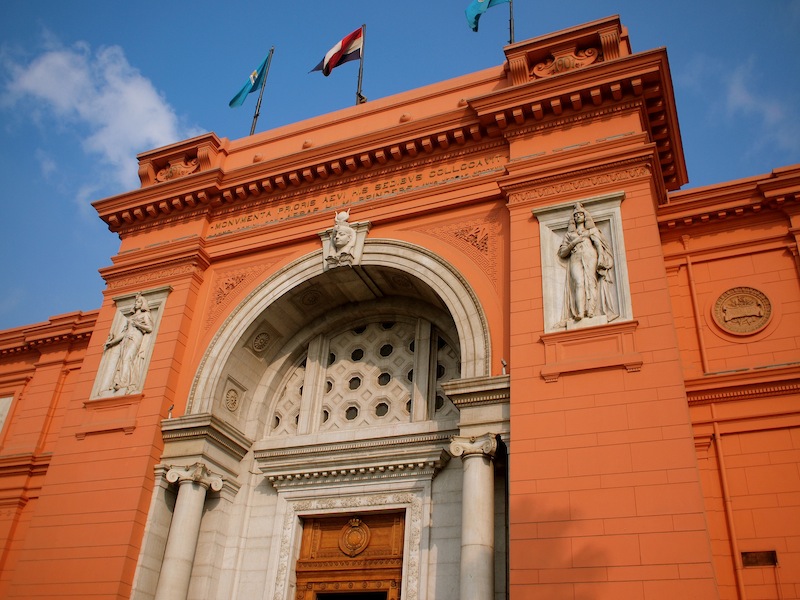 To escape the sooty sidewalks of Cairo and catch a breath of the Mediterranean air, we headed to Alexandria. Unlike Cairo, the ancient past has almost entirely vanished from the surface of the city. The Lighthouse and Library of Alexandria are long gone, although a modern version of the library (the Bibliotheca Alexandrina) has been built.

There is also a Roman Theater, but it’s small and rather decayed (well, it is Roman). Although the Citadel of Qaitbay maintains its relevance in the tourist map, the main attraction of Alexandria nowadays is perhaps Corniche, a 15km boardwalk along the harbor sprinkled with eateries and sights. 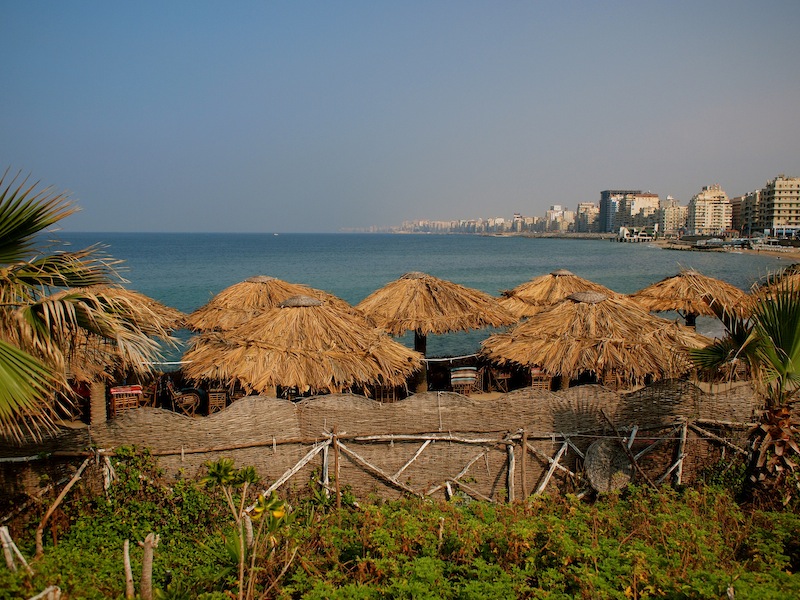 Back in Cairo, our hostel was brimming with activity – and not of the tourist sort. Our hosts had friends over in the common living room, and we all chatted for a while while drinking hot tea. They were young and old, and seemingly only interested in playing football games on their laptops or checking their Facebook status. As the minutes and conversation progressed, they moved away from video games and exclusively to social networking – we could see blue and green logos glaring from their screens. It was the 24th of January.

Wishing to explore more of the city, we excused ourselves and left towards Islamic Cairo. From Bab al-Futuh (Gate of Conquest), we headed south through the labyrinthine branches of al-Muizz Street, getting lost amidst trinkets, spices, relics and the fast feet of Egyptian housewives.

Apart from the Giza Plateau, this was so far the only place where we spotted the occasional tourist. We stopped in one of the many cafes to hydrate and comfort our feet – the walk had been done mainly through either dirt or wooden planks. At rest, we were visited by the odd cat while gazing at the incessant bustle of medieval Cairo, its many minarets rising into the smoky blue sky. 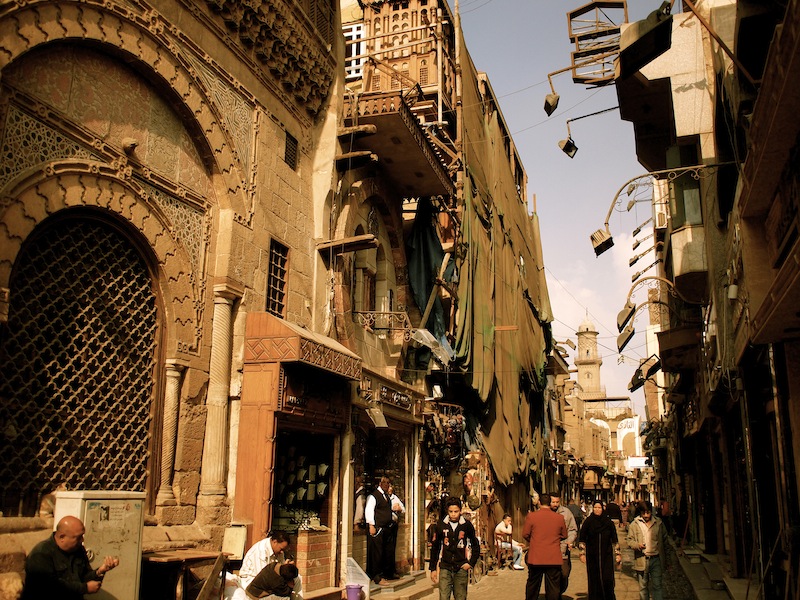 Taking our leave, we continued south until we reached the Citadel. From there, we decided to get a glimpse of Coptic Cairo, for good measure. We meandered through the Church of St George and the Hanging Church, and were particularly captivated by the intricate details of its ceilings and lamps. Coptic Cairo feels completely separate from the rest of the city. It’s simpler and more hushed in its existence.

On our last night in Cairo, we had dinner at Felfela, a popular Downtown restaurant serving local food and a couple of international items. We tried the felafels, the lentil soup and baba ghanoug, all tasty and quickly delivered. The decor is kitschy but we actually enjoyed it. Plus, it provided another chance to find out where all the tourists were…

We walked the busy streets back to our hostel (again, no tourists to be seen) and found the usual commotion in the common room. We seemed to be the only foreigners staying there, and had our last evening tea while chatting to some of the people (all men) gathered in front of laptops and other electronic devices. Our flight left the following morning around noon, so we informed the owner and went to sleep, still dreaming of pyramids and ancient civilizations. 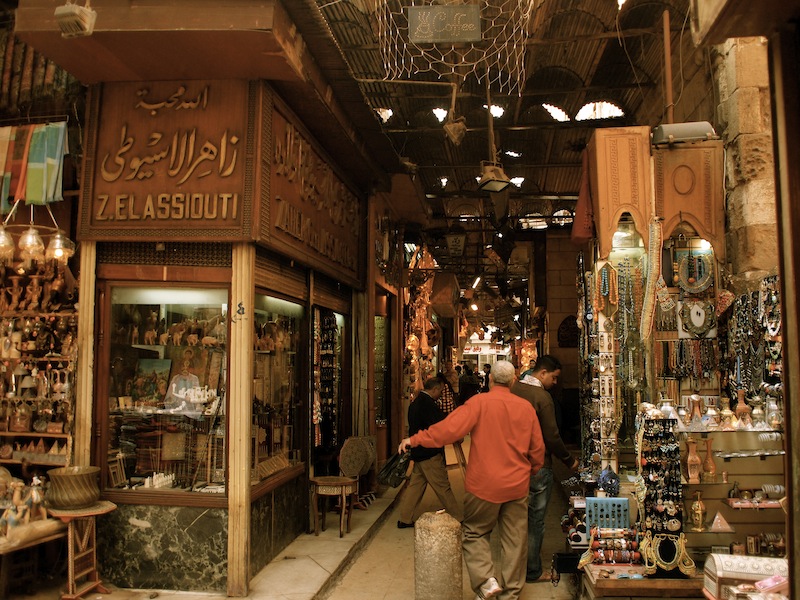 On the 25th of January 2011 we left Cairo, Egypt. Having woken up early, we figured there was still time to wander about a bit more, perhaps even drink another rejuvenating sugarcane juice. We were told it was a holiday, and the streets were most likely deserted. OK, we said, let’s have some more tea and chat then.

The day was sunny as before,  a welcoming light coming through the open balcony and into the musty room. There was still plenty of time, so we made ourselves comfortable. Unexpectedly, we were told they would be getting us a cab. So early? It’s best, the owner explained, since traffic can be quite intense. Since we had seen it with our own eyes, we trusted his advice and got our bags. Goodbyes were said, handshakes exchanged, and we were off to the taxi downstairs.

Once outside, we were surprised by how peaceful everything was. There was hardly any traffic, and no people as far as we could see. The silence was so bizarre that it almost made the air feel cleaner. Odd, we thought. Everything changes in hindsight, but the sensation was truly one of serenity before the storm. We hopped on the taxi and were standing by the airport’s doors in 15 minutes.

Later that day, already at home, news from Egypt were beginning to shake the world. Turning the television on, we watched in awe as Tahrir Square became the epicenter of a revolution. The rest, as they say, is History. 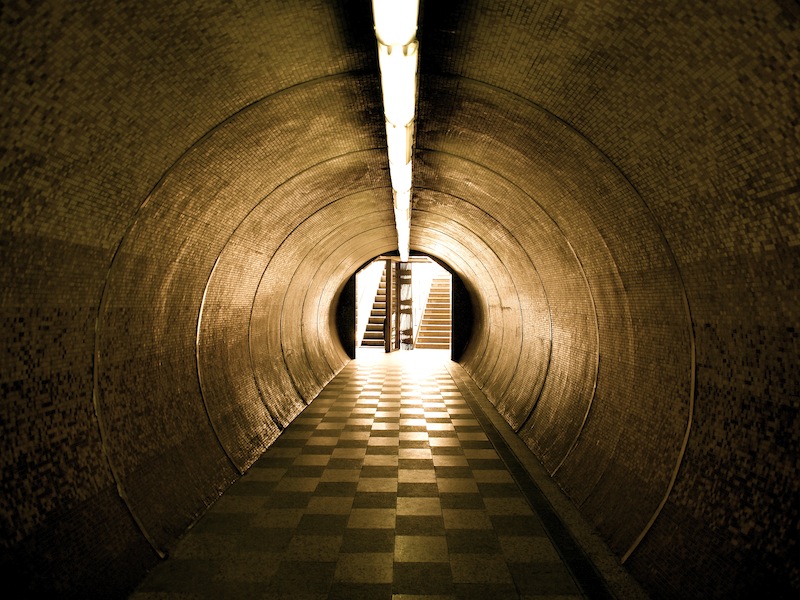 Egypt – light at the end of the tunnel?