Above and Below the Yucatán Peninsula

After a short stay in New York visiting friends, we embarked on our first expedition to Latin America. We would divide our time between a bit of Belize and a bit of Mexico. In Mexico, the Yucatán peninsula was our main point of interest. However, our first glimpse of Mexican sun would be in Cancún, where flights are cheap and tourists abundant.

Our first impression of Cancún was not particularly positive. We had booked a hostel close to the bus station, and we found it, well, primarily geared to a younger generation. We knew Cancún to be a mostly resort-type destination, which is normally not our cup of tea. We were only staying for the night though, having decided to head down the coast of Quintana Roo towards Belize first thing in the morning.

Mérida, Beating Heart of the Yucatán

A week later, having returned from the easy life of Caye Caulker, we were now refreshed and fully determined to explore the many sights and sounds of Southeastern Mexico. Counting once again on lady luck to provide, we managed to arrange the last 2 seats on the ADO bus from Chetumal to Mérida, the capital city of the state of Yucatán.

Mérida is a far cry from the tourist craze of Cancún. It still retains much of the Mayan, French and British influences of its past and its streets, although busy, have a striking post-colonial charm. We noticed the unassuming facades of the brightly colored houses lining the narrow streets some times hid surprising interiors. We stayed at the sumptuous Villa Merida, a vibrantly-restored 19th-century mansion – we were treating ourselves in the Yucatán. 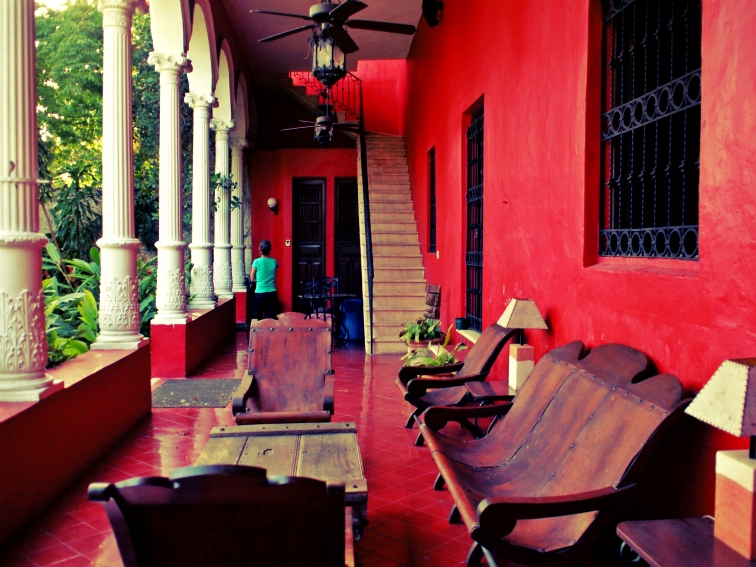 Walking the tiny sidewalks towards Plaza Grande, we came across the restaurant Amaro. Vegetarian in Mexico? We tried it out and had a great meal in their spacious courtyard, even trying the famous Yucatán guamacole. It seemed to cater mostly to fellow tourists, but we could not find any fault with either food (delicious) or price (reasonable). We left satiated and smitten. 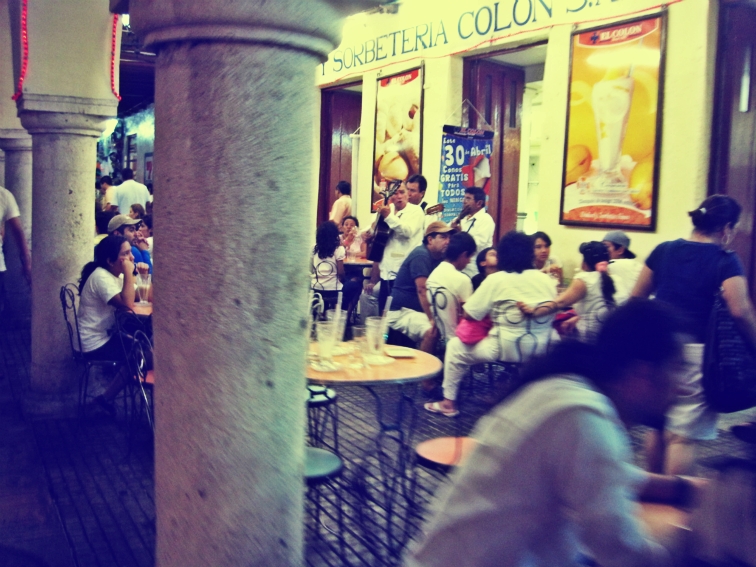 Plaza Grande is at the heart of Mérida’s historical center. It’s also a good starting point to explore some of the city’s main sights. On a Sunday evening, we careened between monuments and smiling natives enjoying the festive night market spread around the central park. The sultry atmosphere was lighted by music, while the illuminated Cathedral shone like a beacon to all the merrymakers. We finally felt we had arrived in the Yucatán.

Mérida made a big impression on us. Perhaps not as deep as the Chicxulub Crater made on the dinosaurs, but indelible nonetheless. Having surrendered to its many delights, we departed on a morning bus to one of the biggest tourist draws of the Yucatán Peninsula: the UNESCO World Heritage Site of Chichen Itza.

The stars above Chichen Itza

Although mostly visited on a day trip from either Mérida or Cancún, we decided to spend a couple of nights in the archaeological city’s vicinities, to skip the tourist buses and explore it when less crowded. After the less than stellar experience in Cancún, we continued to splurge on accommodation and stayed at Hacienda Chichen, a few steps away from the site’s entrance.

The hotel’s grounds are both peaceful and gorgeous. Although way above our normal price range, it felt good to be pampered for a while. On our first day, we skipped the tours on offer and went exploring on our own. We had to call a taxi since the hotel is far from any villages. Hacienda Chichen’s main purpose it to provide a luxurious night’s sleep between visits to Chichen Itza, and it plays that role well. However, we wanted to try a bit of local color, hence the taxi. The driver was young and quite helpful, but was a bit surprised we would pass on the hotel’s dinner offerings and opt for some cheap sandwiches at the nearest village. 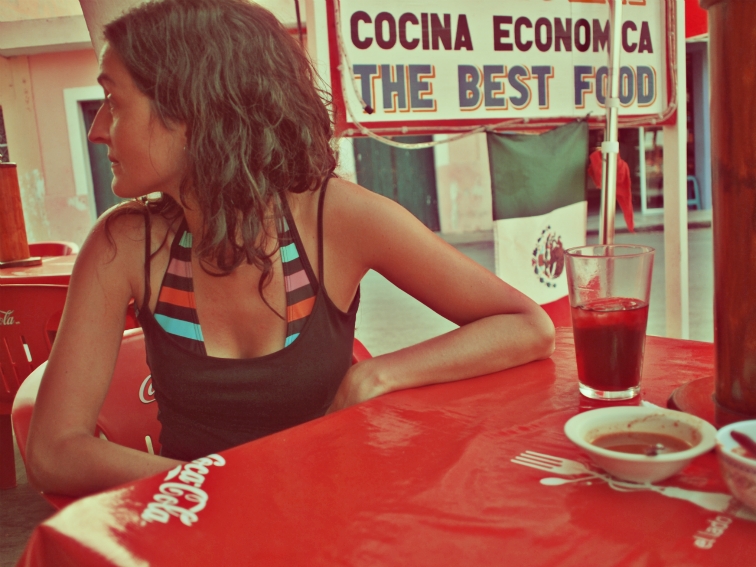 The following morning we set out early for Chichen Itza. We left 15 minutes before 8am. OK, so not that early, but the site only opens at 8am. 15 minutes was more than enough time to walk from the hotel to the site’s entrance and buy our tickets. We still had to wait a few minutes for the guards to let us in. Surprisingly enough, we were about 5 tourists in total. We were finally allowed in and, at least for the first hour, seemed to have the place to ourselves. Tip of the day: be there before 8am!

There are many things to see in Chichen Itza. The grounds are vast and full of striking remains from the Mayan-Toltec civilization. The most famous is undoubtedly El Castillo, aka Pyramid of Kukulcan. It’s as impressive as the books say it is. To be able to walk around it (no climbing allowed, alas) in almost complete solitude, as the sun began its ascent, was truly a remarkable moment. We meandered through luscious green, slowly savoring the quiet resilience of Chichen Itza’s many wonders. 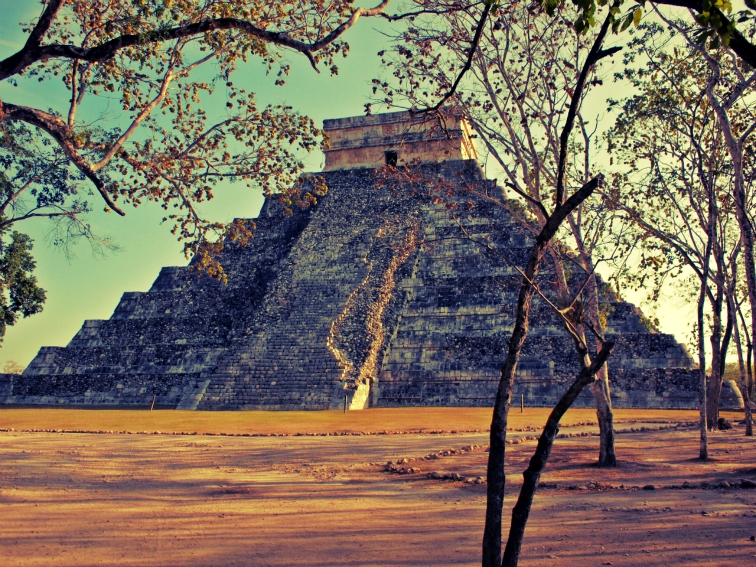 Albeit not as awe-inspiring as the temples of Angkor Wat at first glance, the Pre-Hispanic City of Chichen Itza gradually became more arresting as we strolled between El Caracol, the Great Ball Court and the Temple of the Warriors. All of them add to the singular beauty and mysticism of the place, and by the time we reached the Sacred Cenote we were won over. We wandered about all morning, seeing all the other magnificent buildings and the Xtoloc cenote. 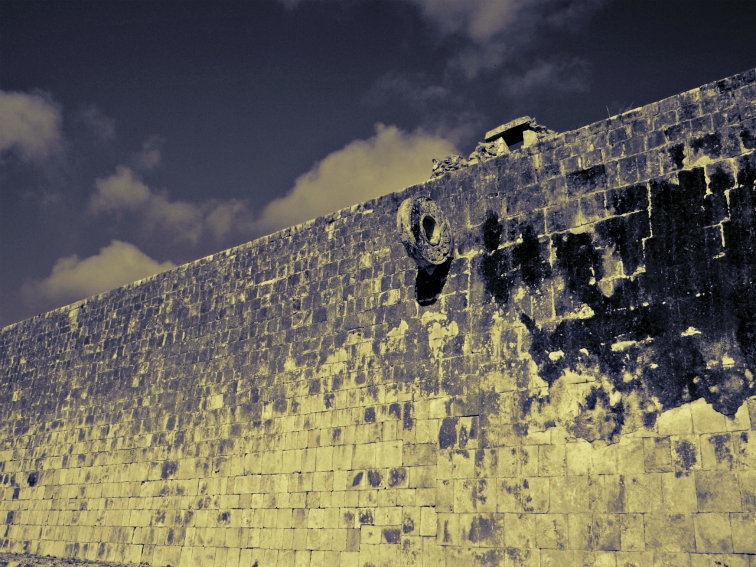 We left before noon, tired but exhilarated. The site was now crowded, and we patted ourselves on the back once more for arriving early. Since the tickets included a night show, and we were so close to the site, we returned that evening to watch the Light and Sound show. Although not even remotely on the level of something like Yangshuo’s Impression Sanjie Liu show, we still enjoyed it.

There aren’t that many lights to begin with, which was fine with us. I must admit being pleased with the fact it was done in Spanish only. It somehow made it less touristy. In the end, it comes down to expectations. We had a good time, but mostly due to the beautiful, warm night and the opportunity to see El Castillo in near darkness, illuminated only by stars (until the artificial lights came on).

The watery wonders below the Yucatán

Being a limestone plain, the Yucatán peninsula is lacking in streams or rivers. Water is mostly provided by underground rivers, which in ancient times could only be accessed through cenotes. These gateways to essential sources of fresh water became crucial to Mayan culture and mythology, the Sacred Cenote of Chichen Itza being the most important of all.

Currently, cenotes have attained a less mystical function. They are now wondrous entrances to a refreshing world of blue and green water, sometimes developed around a tourist complex and other times maintaining their original structure. We had the opportunity to visit two, and they were very different experiences.

We first went to the more crowded Eco-Arqueological Park Ik Kil. The Sacred Blue cenote of Ik Kil is, as the name suggests, of a deep blue color. The water is cold but, after enduring the scorching heat of the Yucatán, gratifyingly refreshing. It was already quite crowded, but I was surprised at how much I enjoyed throwing myself into Ik Kil’s crystal depths. 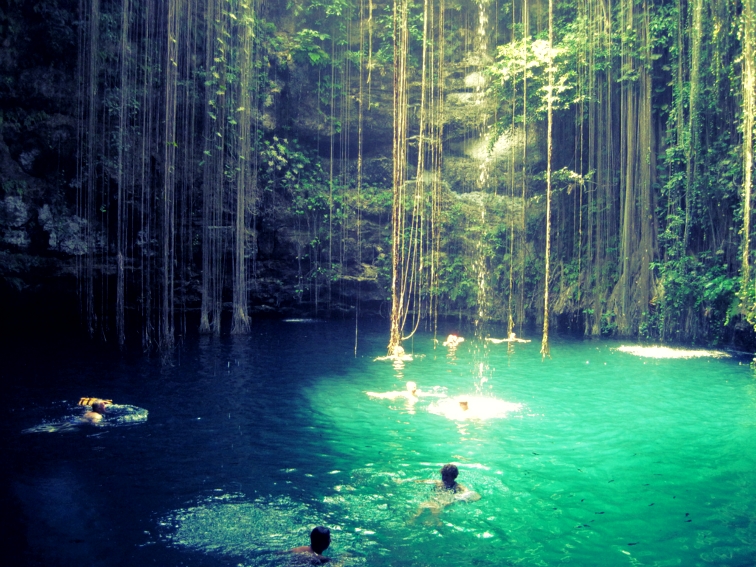 Swimming in the Ik Kil cenote

Our next stop was the less impressive but much quieter Yokdzonot Cenote. The place is operated by local Mayan women and is more authentic. They provide life-jackets (and smiles) with the entry ticket. Since I had been so comfortable swimming in Ik Kil, I signed a note stating I would be solely responsible for my untimely death at Yokdzonot and waived the use of a life-jacket.

The descent to the cenote is steep but entirely manageable. The water is different than at Ik Kil, tending towards a shade of green instead of blue. Personally, I enjoyed swimming Yokdzonot more, and could have stayed there for hours. It was one of the loveliest experiences we had in the Yucatán. The brave ladies of Yokdzonot have done a terrific job.

As an introduction to the beauty Mexico has to offer, we believe we could have done no better.