Why the Buddha Smiled in Luang Prabang

On a mad dash between Hanoi and the painted veils of Yangshuo County, a short visit was paid to Luang Prabang, in north central Laos. Knowing close to nothing about the town itself, and only bits and pieces of Laos’ rich history, we approached it with a somewhat guarded enthusiasm.

The town itself sits by a peninsula born of the mighty Mekong river’s embrace of its tributaries Nam Knane and Kual Hop. All around rising limestone hills dot the serene landscape. It’s a small place, with a particular charm and easy pace of living.

Although Laos’ second biggest city, it feels very much unlike any other Southeast Asian location we have visited. Renowned for its mesh of Lao traditional wooden structures and European colonial architecture, which lends it a quite distinctive look, Luang Prabang has been a World Heritage Site since 1995.

Legend has it the Buddha once smiled in Luang Prabang while resting during one of his many travels, and prophesied it would one day become a wealthy capital. Although it did achieve capital status, first of the independent Luang Prabang kingdom and later of Laos itself, it eventually lost it in 1946 in favor of Vientiane. But perhaps the Buddha was referring to other, more prosaic riches.

We stayed by the Wat Sen Temple, which contrary to expectations was not swarming with tourists. They do gather in the early morning to gawk at and blind-flash the saffron-robed monks collecting alms along Sakkaline Road, but during the rest of the day the temple and its environs remained, like the town itself, sleepy yet radiant.

In Luang Prabang, we were reconnected with the simple pleasures of life. The fresh comfort of an early breakfast gazing at Wat Sen; a long stroll along the Mekong, watching the barges come and go; the occasional stop to grab another bite of fruit or honeyed pancakes in one of the many restaurants scattered around town; meandering through the warm streets with no purpose but to enjoy the sun and the rustling of the leaves. 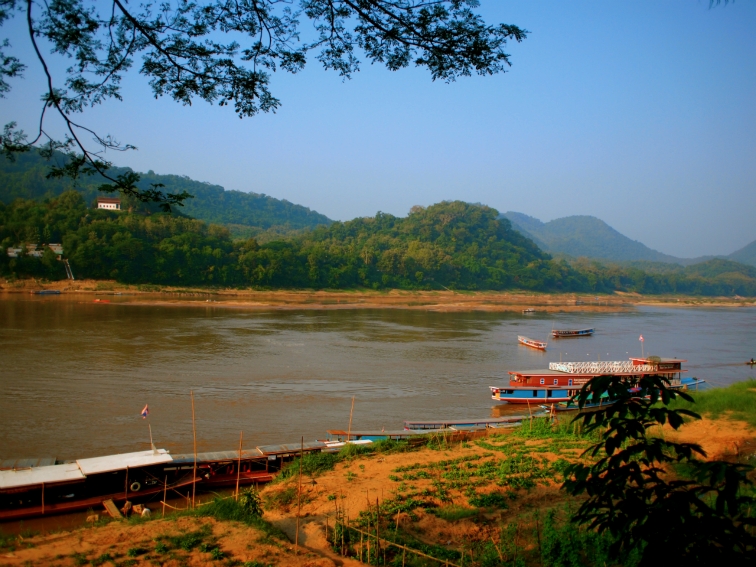 Reconnoitering the city, we walked through the Haw Kham Royal Palace complex, taking our time, squinting at the green and gold emanating from its Buddhist temple, reflecting the sun and our own luminous contentment. We effortlessly drifted towards the old monastery of Wat Xieng Thong, resting under its greenery before deciding which route would most likely lead to a delicious meal. The answer was all of them.

Already familiar with the hustle and bustle of marketplaces in Southeast Asia, we were pleasantly surprised by the handicraft Night Market in Luang Prabang. As evening approached we made our way expecting the usual aggressive hawking and exasperating haggling. Instead, we gently rummaged through its vibrantly colored stalls, not so much bargaining as just talking and smiling profusely. We loved the relaxed atmosphere, and would have gladly bought most of the items on display.

The sellers ranged from elderly ladies to young kids displaying their manual skills while completing their homework. As common as it may be throughout Southeast Asia, in this particular case the sight of children selling wares did not strike us as exploitative. Relatives seemed to be on hand, their smiles shy but also curious and patient. As the evening veered towards closing time, at 22:00, most of the children began dozing off, and parents would be selling the last patterned duvet of the day while rocking them further to sleep. 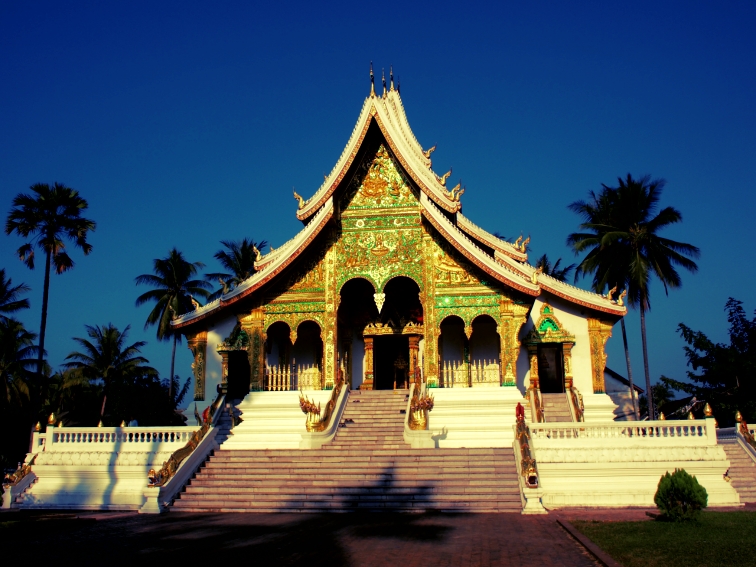 Wanting to explore a bit more of the surrounding countryside, one sunny morning we rented a scooter and went for  a ride. The landscape, initially dotted with small houses, schools and all other signs of everyday life, soon led to more sparsely populated roads. As the houses turned into road shacks with coconuts beckoning our thirst, human presence all but evaporated, and we rode for a few kilometers in silence.

The trees became plentiful, and wilderness sprawled around us, blurry at close range but seemingly motionless in the distance. As the earthy green smell of untouched earth engulfed us, our desire was to keep going forever, swerving in the breeze and lulled by the motorized hum of our scooter.

About 30 km outside of Luang Prabang are the Kuang Si Waterfalls. Heading there one bright blue morning, we stopped first at the Bear Rescue Centre, to see the endangered Asiatic black bears, commonly know as moon bears. Since it was early in the day, they were mostly nodding off or casually playing with their conical wicker baskets. The Rescue Centre accepts donations and sells t-shirts to help pay for the costs involved in their care and keep them away from the vile hands of poachers and bile farms.

Paying our admission to the Kuang Si Waterfalls, we continued through a shaded trail until we reached the first of many azure pools. We went for a refreshing swim and scrubbed our bodies with mud, after hearing about its therapeutic properties. Properly cleansed, we chatted with a nonagenarian who was also going for her first swim of the day. Slightly awestruck and hoping to be able to reach her age with the same level of energy, we wandered upwards amidst tree trunks and ventricular roots.

Following the flowing water and dipping in a out of its multilevel pools, we finally came across the waterfall. Although not massive, it’s still a beautiful sight. Feeling adventurous, we proceeded to climb its side. At the top, we bumped into a small group of fellow tourists also braving the slippery mud to get a better look at the waterfall’s mouth. 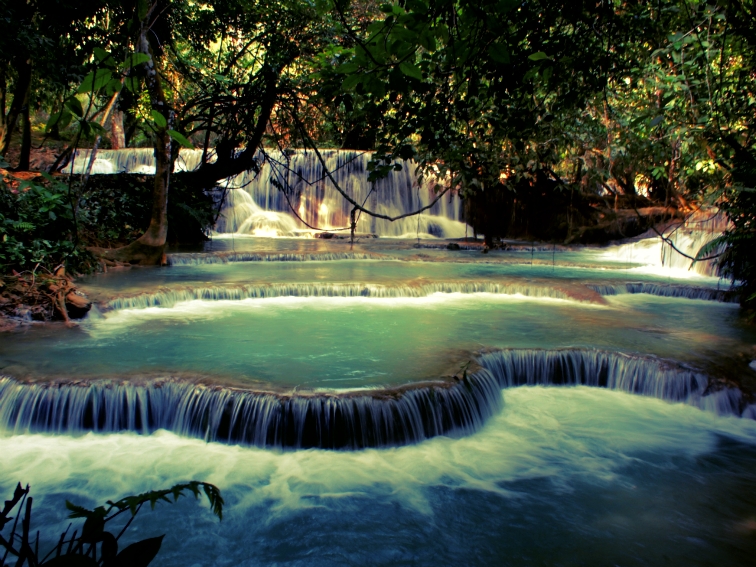 Back in Luang Prabang, there was not much to do except take another stroll along the Mekong, waiting for the sunset to rise across the waterfront. The days seemed to roll into each other, and we found it very easy to lose track of time. Luang Prabang lacks a world-famous attraction like Angkor Wat or the dragon islets of Ha Long Bay, which perhaps explains why it managed to retain such a peaceful feel in relative close proximity to rambunctious backpacker dens like Vang Vieng. 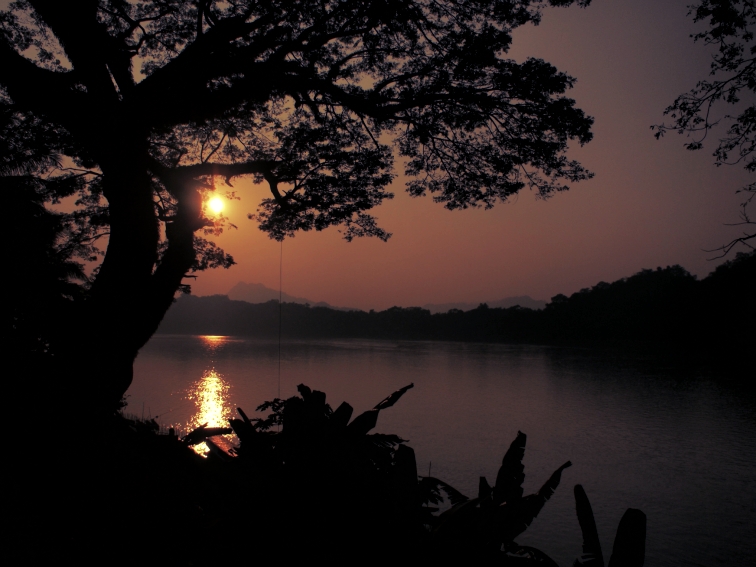 Sunset by the Mekong in charming Luang Prabang

Luang Prabang was one of our most serendipitous journeys in Southeast Asia. Booked on a whim, it became a favorite destination and a fountain of sun-drenched memories still lingering through the unending European winter. We sincerely hope it does not fall prey to the development craze encircling neighboring countries.

Although we wouldn’t wish to deny its people the short-term economical benefits a mass influx of tourists would probably provide, Southeast Asia seems to be riddled with examples of how this usually does not turn out well – neither for its native inhabitants nor for tourists in search of something remotely original. Since Luang Prabang now sits high on our list of loveliest places gracing our extraordinary world, we will probably get an update on its story in the near future.

Until then,  it’s quite easy to understand why the Buddha smiled in Luang Prabang.