Tokyo can be an overwhelming city. Its electrifying pace and sense of urgency can engulf even the quietest soul, leaving it reeling from dizzying beeps and rowdy blips, crisscrossed pedestrian crosswalks, ghostly multitudes and piercing neon lights. Nevertheless, it’s a brilliant place to get lost, in more ways than one: lost in the crowd, lost in the streets and its smells, lost in translation, lost in thought…

After a while though, you might find yourself trying to discover some breathing space away from people surgically connected to their cellphones.

One of the many remarkable things about Japan is how ancient past and shimmering future are able to converge within a relatively small geographical space.

Although this can be experienced in the thick of a major metropolis like Tokyo (Asakusa’s serene Sensoji Temple is a few metro stops away from the concrete and glass wilderness of Shinjuku, for instance), there is one quiet haven where both past and a greener future coalesce into an harmonious present. That place is Mitakesan. 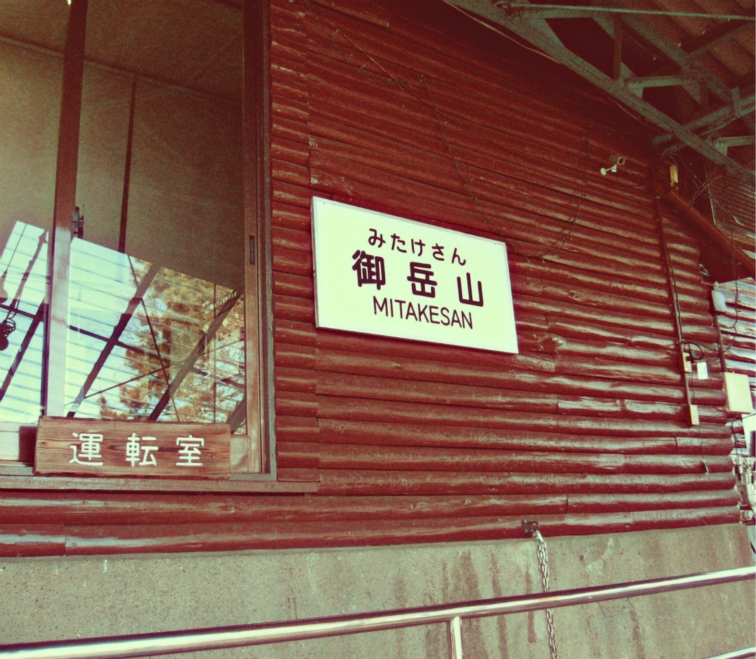 The name Mitakesan was unknown to us before arriving in Japan. However, there was a birthday to celebrate, and the desire to do it in view of Mount Fuji led us exploring mountainous areas around Tokyo. Not by foot, since we were a bit pressed for time, but through our fingers and the magical highways of the Internet.

Rummaging through the web, I stumbled upon a little news article in the Japan Times extolling the fresh air and hiking trails of Mount Mitake (929 m). Also, there was the possibility of climbing further and reaching Mount Otake (1,267 m), from whose summit it was possible to see Mount Fuji on a clear day. Although it was January, the weather had been gloriously welcoming so far, so it was worth a shot.

We would set camp in the village of Mitakesan and go exploring, deciding to make it an overnight stay and not a mere day trip. Nonetheless, looking for accommodation in Mitakesan proved a somewhat difficult procedure…

We wanted to try out one of the many ryokans (traditional Japanese inns) scattered throughout Mitakesan, and enlisted the help of the lovely employees at Asakusa Ryokan Toukaisou, where we were staying at the time (they were a more urban type of ryokan – we wanted to go old school).

We managed to gather a list of contacts, from which we would phone a few numbers and ask if they would take a couple of gaijin for the night. Easier said than done…

According to our helpful yet improvised phone operator, all the places were full. After trying a few more numbers, one ryokan finally said yes. YES! We gave our details, which were promptly translated to the person on the other side of the phone, a lady we were told was named Hattori-san.

And so we were booked into a Mitakesan ryokan. All that was left to figure out was how to get there. Once again, the friendly people at Asakusa managed to help us out, and by the following morning they had devised a hand-drawn map with all the necessary steps to reach Mitakesan and an hypothetical view of Mount Fuji on my birthday.

Departing Shinjuku Station on the JR Oume Line to Mitake Station, the journey takes approximately 90 minutes, as the traveler watches the city give way to its suburbs, and almost imperceptibly to hills and towering mountains.

On a side note, if curious about the art of Japanese cinema posters, a pit stop at Oume station is definitely recommended. Arriving at Mitake Station, a shuttle bus led us to Takimoto, where we took the Mitake-Tozan Railway cable car, which after a steep ascent put us in full view of a strikingly different landscape from 90 minutes ago. 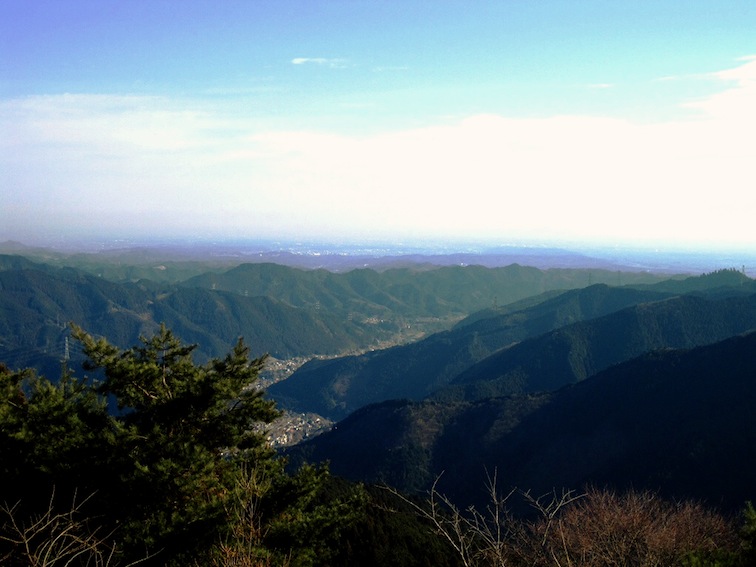 Mitakesan offers a plethora of ryokans, some offering breathtaking views on top of delicious food, relaxing baths and warm hospitality – at least that’s what we got in Hattori-san’s cozy corner of Japan.

When we finally found her place (she had put a sign outside her door with our booking name in neat letters), we promptly felt like we had been transported into another world. 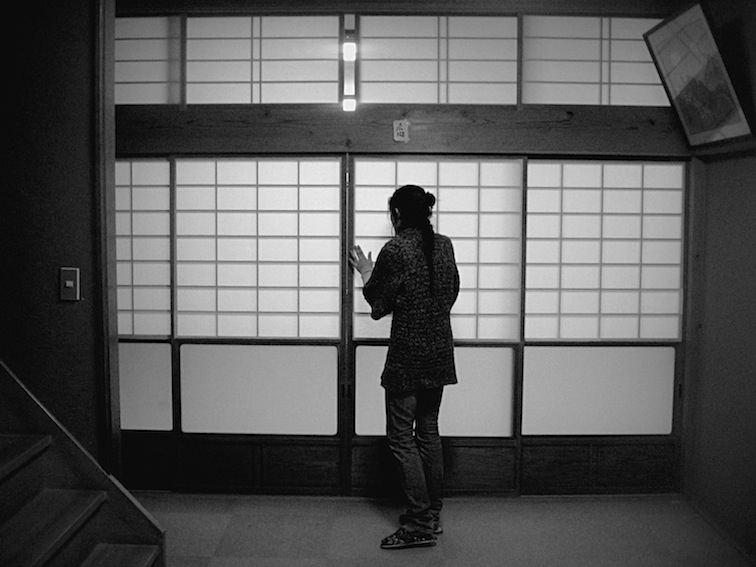 Elle at the ryokan

The smell of tea and oranges immediately infused our tired bodies with a vivid sense of comfort, only exacerbated by the sight of the tatami mats as we finally entered our room. Hattori-san bravely managed to explain the basics, even after we took her through some perplexing language detours.

Since it was still early afternoon, we decided to stick to our plan of hiking towards Mount Otake and attempt a glimpse of the elusive Mount Fuji. But first, we drank tea and ate brightly colored oranges – for energy purposes.

Leaving Hattori-san’s family-run ryokan, we climbed the steps to the venerable Musashi-Mitake Shrine, the most recognizable symbol of Mount Mitake’s role as a centuries-old nexus of worship, which is believed to have withstood the elements for nearly 2000 years. 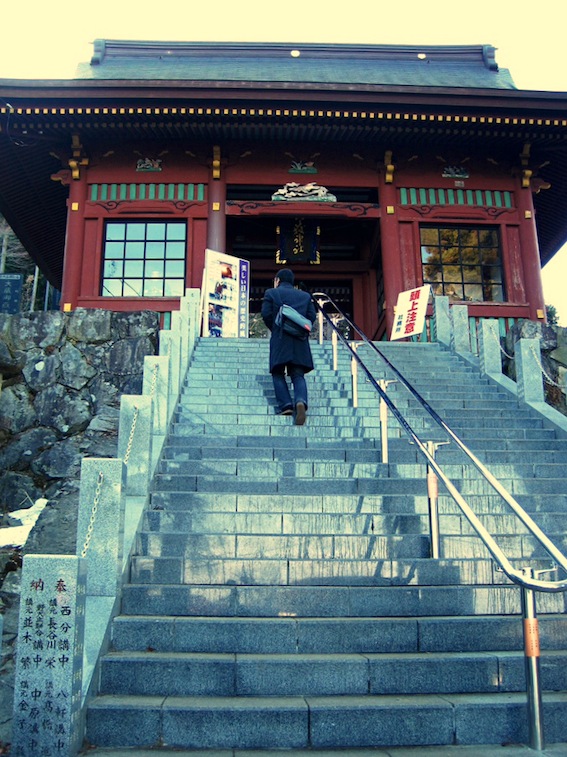 After a short stroll taking in the views and the glorious smell of old wood, we departed upwards.

There are several routes to choose from when wandering into this part of the Chichibu Tama Kai National Park. Some are more arduous, others more isolated, but they all share picturesque scenarios and worthwhile sites.

Amidst glances over luxurious valleys below, the constant rustling of leaves and the sound of trees swaying in the wind transport the wanderer to a realm of simple pleasures. 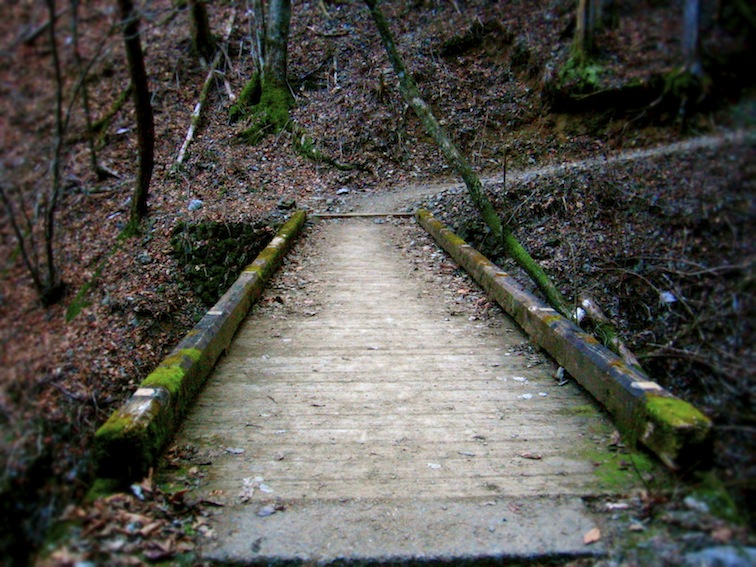 Scattered throughout the surroundings are hidden shrines and secluded temples, reminders of the unique spiritual world enveloping the numerous peaks and valleys. 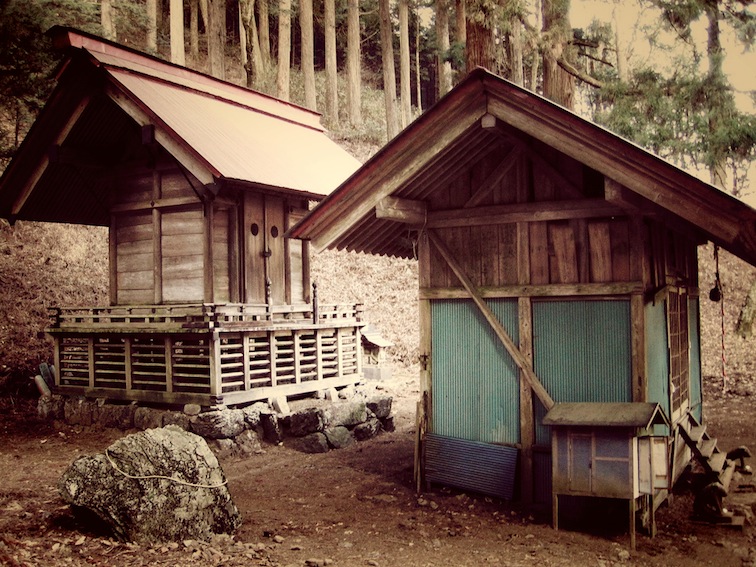 Going through the serpentine path we felt like we had become characters of one of Hayao Miyazaki’s masterful creations (we kept our eyes open for Totoro, and knew chance encounters with the renowned but elusive Japanese flying squirrel [musasabi] were always a possibility). 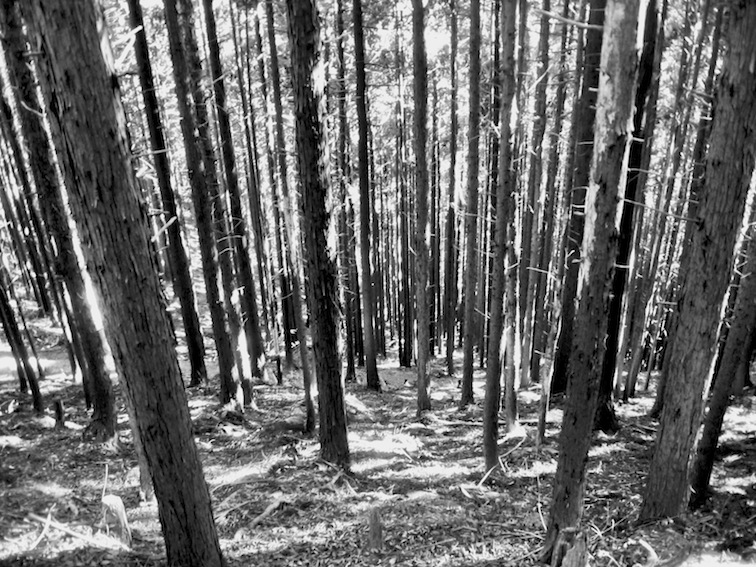 Although walking mostly in solitude, we came upon the occasional human presence, usually a smiling old Japanese hiker on its way back to Mitakesan, looking much fresher than us in spite of being more than double our age, and with whom we never failed to practice our Konichiwa! salutation.

Some of the main attractions of Mount Mitake are the Rock Garden, whose moss-covered stone steps and trickling streams provide a perfect background for a restful stop, and Akuhiro Falls, which although lacking dazzling heights and roaring foam, are still startling in their intimate exuberance.

The gurgling sound of water is ever present while strolling through the rising wooded paths, its downward spew offering soothing company after many hours meandering through an increasingly solitary landscape. 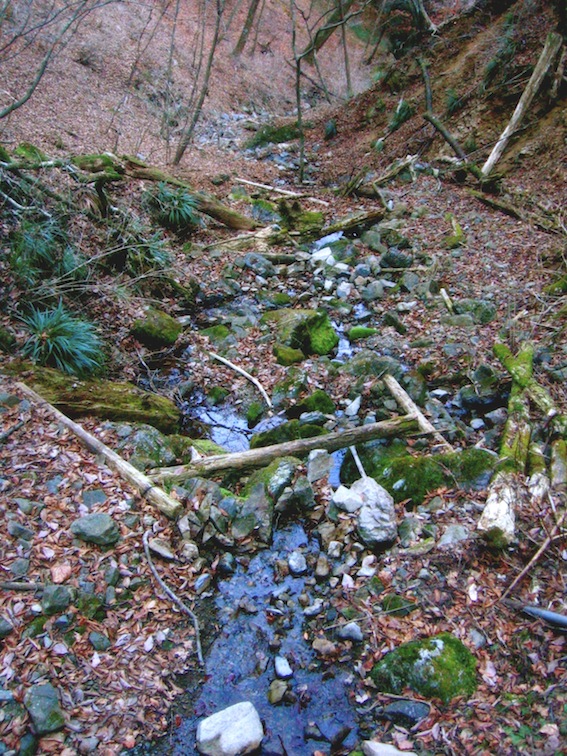 Luckily, there are a few signs with directions placed at relevant crossroads, although their helpfulness is a times dictated by one’s knowledge of Japanese writing. 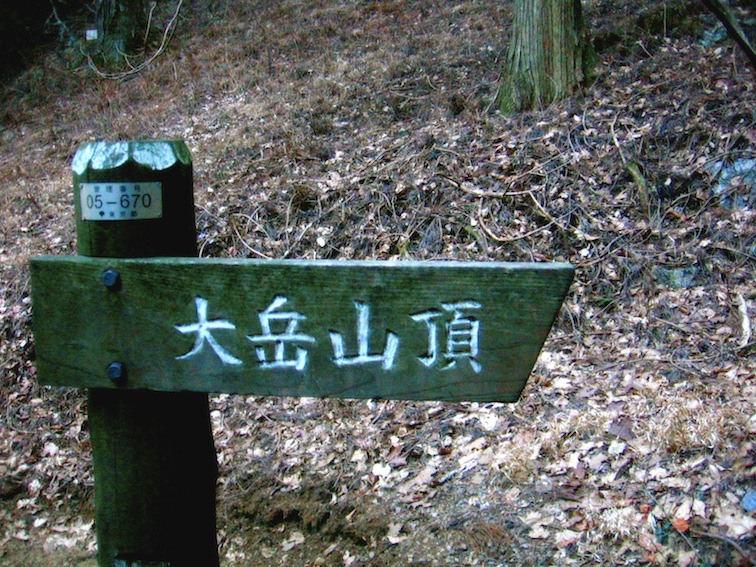 Eventually the path became quite steep, and our legs were given some proper exercise, until at last we reached the summit of Mount Otake, and were offered a fortunate view of Mount Fuji in the distance.

We had been told Mount Fuji is somewhat shy and prefers the seclusion of a cloud of mist, but now its silhouette rose like in an ancient drawing. We sat down and rested for a few minutes, enjoying the sunset and looking into the vast dense forests and imposing mountain peaks resting like green monoliths as far as the eye could see.

That was my birthday gift. 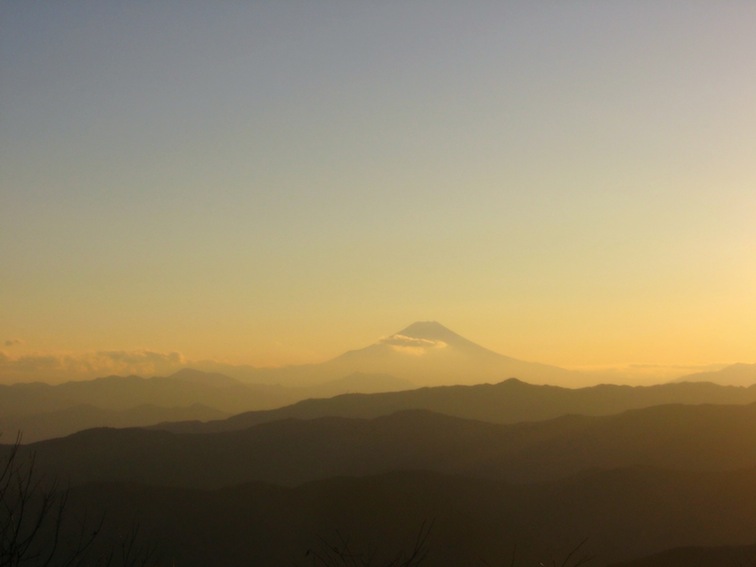 The trip back was much quicker, and by the time we came running down we were the only ones still out on the trail. When we arrived at the steps of the Musashi-Mitake Shrine it was already dark. We took a few minutes to rest, and were tending to our sore feet when a shadowy figure came stumbling towards us with an old lantern, like a ghost from a Kenji Mizoguchi film.

It was Hattori-san, who breathed a loud sigh of relief when she spotted us. Apparently, and although we did inform her we were going for a walk, she never thought it would stretch into nighttime (to be honest, neither did we) and was worried we might have gotten lost or been eaten by bears.

Wait, bears? Oh, so that’s why everybody we crossed on the trail was carrying little bells…

After apologizing profusely (I nearly broke my back from so much bowing) for putting her through such distress, we were led back into the warmth of the ryokan, just in time for dinner.

The communal dining room was quite spacious, and since we were the only ones there we felt almost like warring feudal lords in an Akira Kurosawa film. 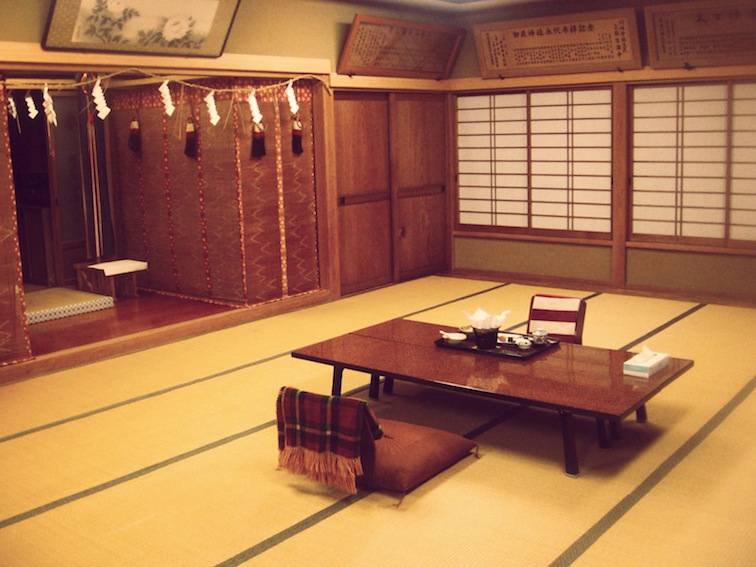 We realized we knew very little of ryokan etiquette, and although curious about every single thing surrounding us we preferred not to bother Hattori-san with questions that she would probably have difficulty answering in English. Eventually, hesitant and almost on tiptoes, we made our way to the middle of the room and sat down. 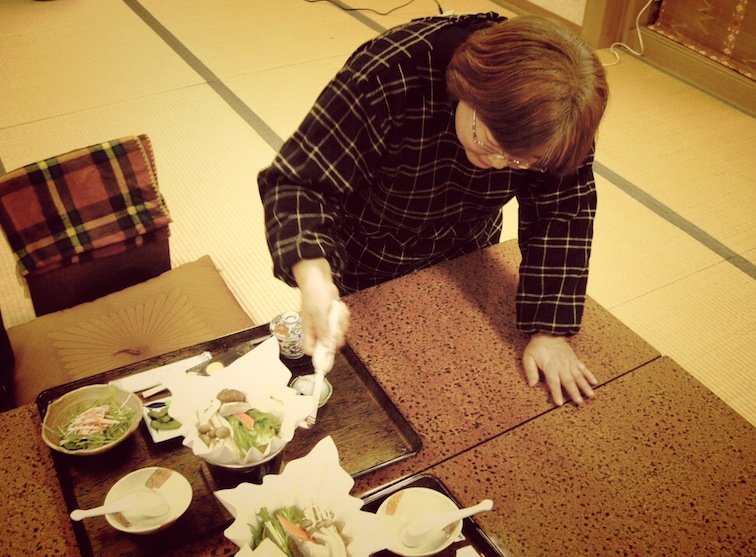 Oh the food, the food! Delicious, of course, but also at times bizarre for a Western palate. Rice, veggies and fish are always good, but some of the more extravagant items took some getting used to – not just to the flavor, but also to the texture and color. 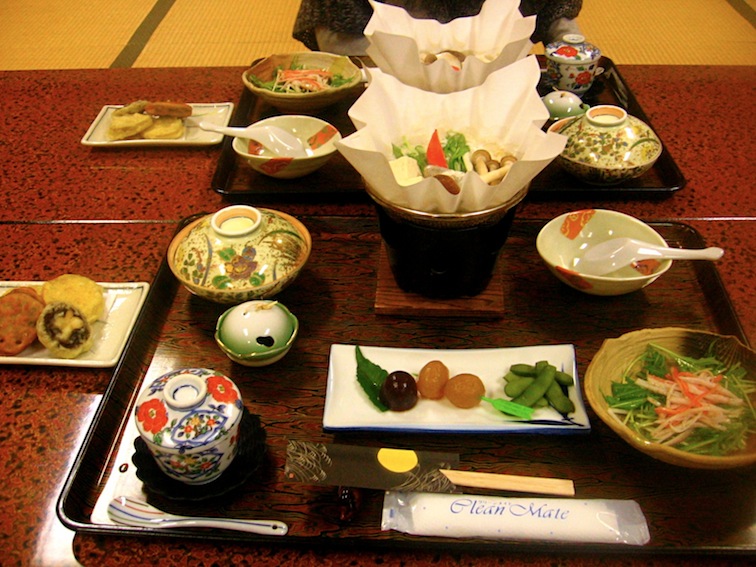 Never shying away from experimentation, I tried one of the more rubbery concoctions presented, with somewhat telling results. 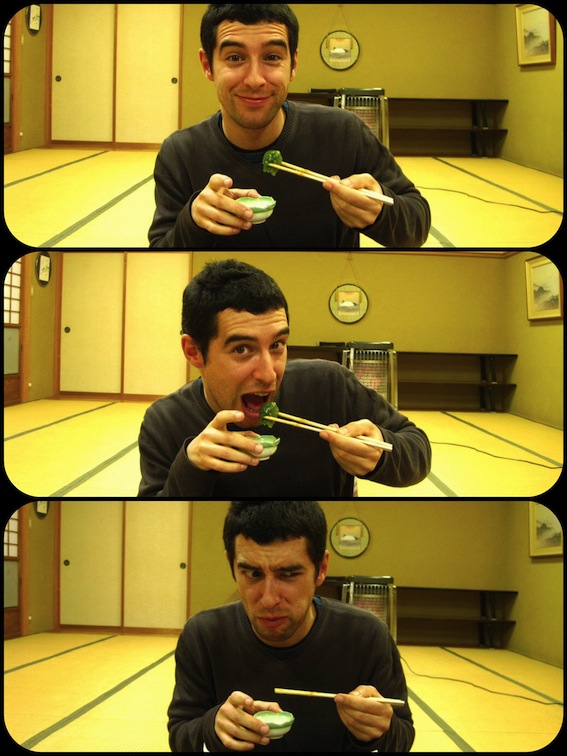 Hey, they can’t all be winners… Notwithstanding that particular encounter, everything else was positively scrumptious, and our ardent love of Japanese food remained undiminished. In our books, Japan still has the best food in the world (the delectable diversity of Mexico comes a close second).

Once our bellies began to touch the table, we left to our comfy room upstairs. Following a magnificently steamy bath, we donned our matching yukatas (cotton kimonos) and spent the rest of the evening in ultimate relaxation. 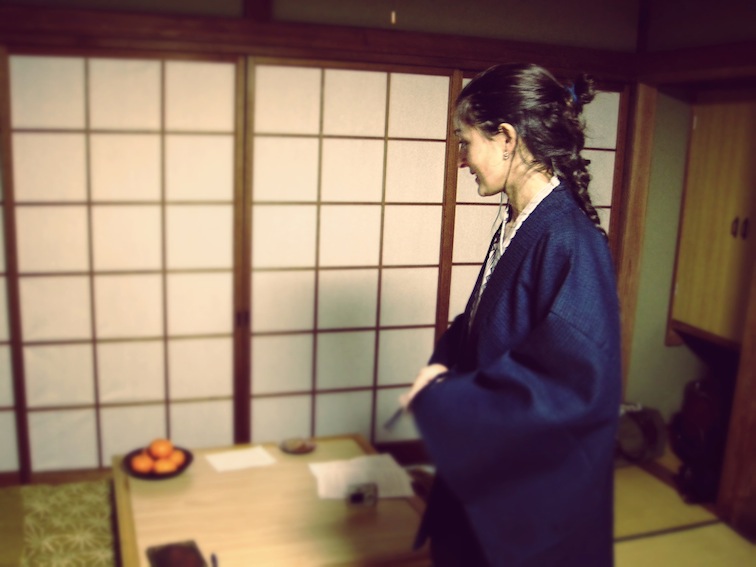 The following morning we bid our goodbyes to Hattori-san and set off once again into a clear blue day. While walking through the zigzag roads of Mitakesan on our way to the cable car, we discussed our hiking experience of the previous day and the almost complete absence of Westerners (or Japanese tourists, for that matter), both coming to the sudden realization there had been something nagging at us since we arrived.

Mitakesan was almost deserted, contradicting what we had been told when trying to book the room from Tokyo. We bumped into the odd local (all remarkably friendly and even curious), and met a few elderly hikers coming from Mount Mitake – hardly a multitude. 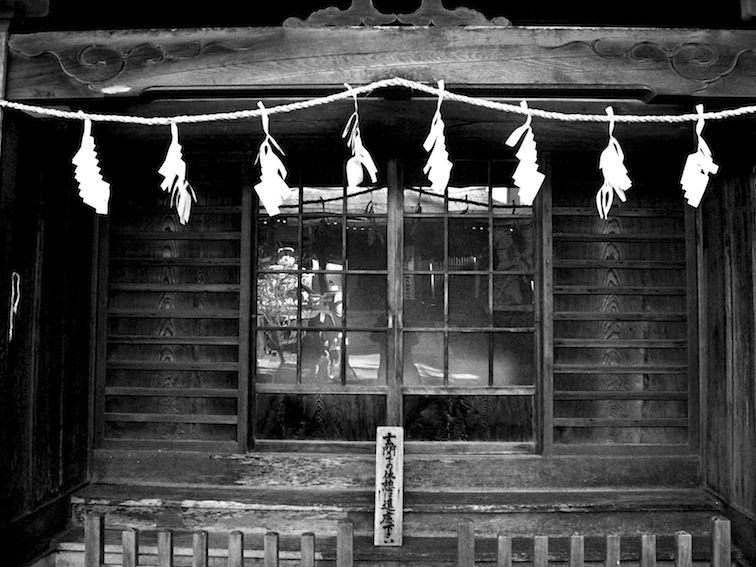 We concluded this was not due to some devilish plot to deny foreigners the traditional pleasures of a small Japanese community, but was merely an example of a cultural gap: the Japanese abhor being put in potentially embarrassing situations (and not being able to properly communicate with two foreigners would be one), even at the expense of earning a nice amount of yen.

As we soon found out when first arriving in Japan, English is not as widely spoken was we originally thought. Hence, we finally assumed all the ryokans contacted would rather not go through the trouble of trying to understand some ragged foreigners with little or no knowledge of Japanese etiquette.

With that in mind, we believe we would have never had the opportunity to experience the wonders of Mitakesan if not for Hattori-san’s gentle courage in accepting a pair of gaijin into her beautiful inn. For that, and for everything else that followed, we are deeply grateful. Thank you Hattori-san!

We are back in Tokyo, returning to our previous home at Asakusa Ryokan Toukaisou. As soon as we are standing in full sight of the reception area, the lovely employee who had helped us book our ryokan in Mitakesan exclaims: “We thought you were dead!”

We look at each other, puzzled. She continues: “Hattori-san called us yesterday evening, almost panicking, saying she had lost the two foreigners and didn’t know what to do”.