Day of the Dead in San Cristóbal

Día de Muertos, or Day of the Dead, is a Mexican holiday honoring the lives of the deceased. Its origins can be traced back to pre-Hispanic times, when the Aztec goddess Mictecacihuatl reigned as Queen of the underworld, keeper of bones and Lady of the Dead. Catholic influences brought by the Spanish made the holiday evolve into the current extravagant celebration taking place between the 31st of October and the 2nd of November.

The 31st of October marks the beginning of the construction of the altars. They were sprouting everywhere in San Cristóbal de las Casas – in private homes, shops and even bars. Fliers were also being distributed, showcasing a route where everyone could visit all the local altars on public display. 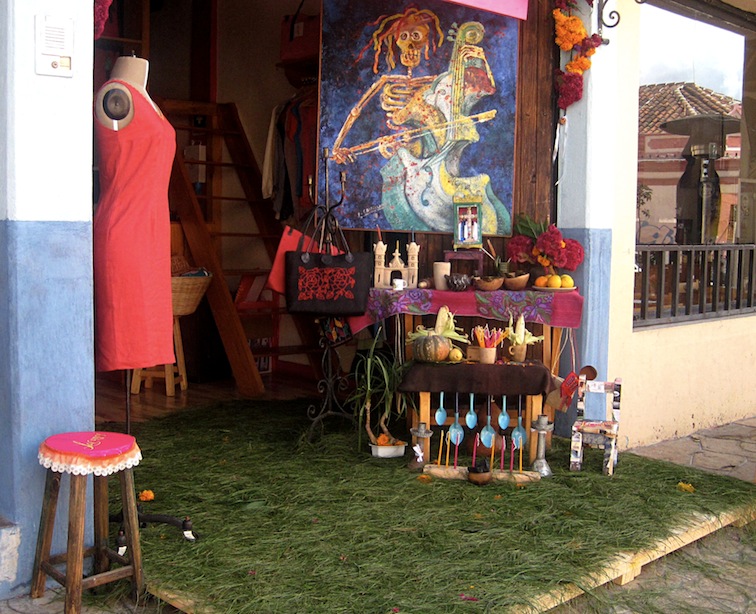 There were also plenty of skeletons and skulls – made of wood or sugar, tiny or life-size. 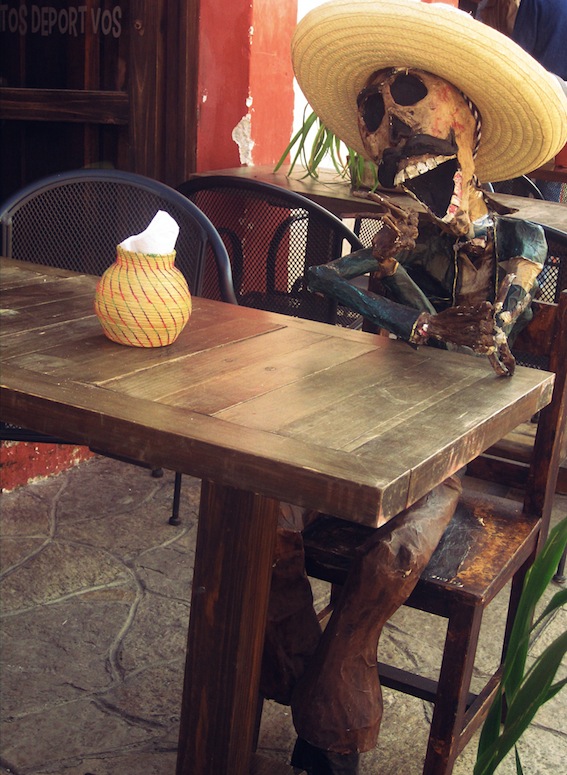 San Cristóbal also held an altar contest. They were built in the afternoon, mostly embellished with traditional orange marigolds, colloquially known as the flower of the dead. 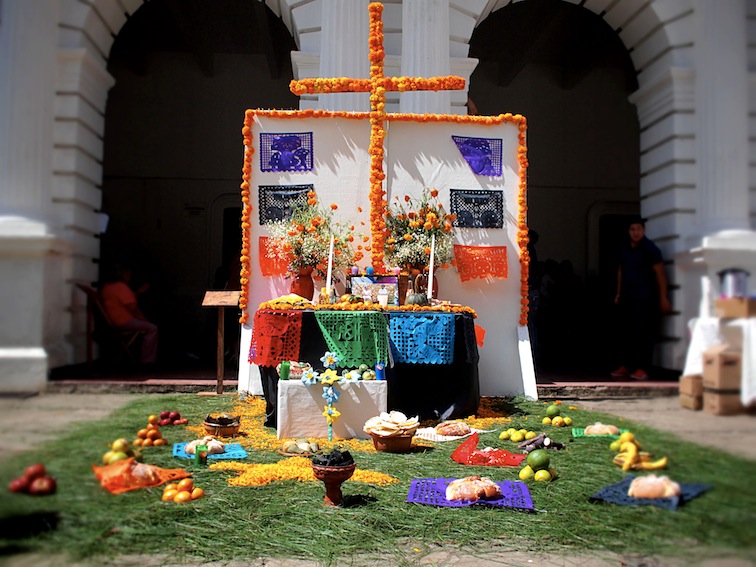 In the evening, the panel of judges heard the contestants explain the stories behind their altars and chose a winner. 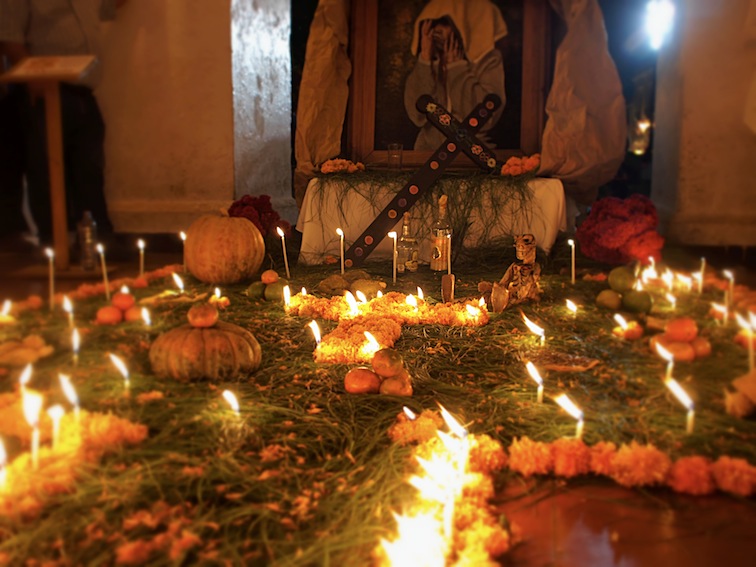 All altars featured photos of the deceased and various offerings (ofrendas). The items on offer were both traditional, such as “Pan de Muerto” or “Bread of the Dead”, and personal. Basically, it is custom to display items loved by the deceased, be it beans, alcohol or cigarettes. 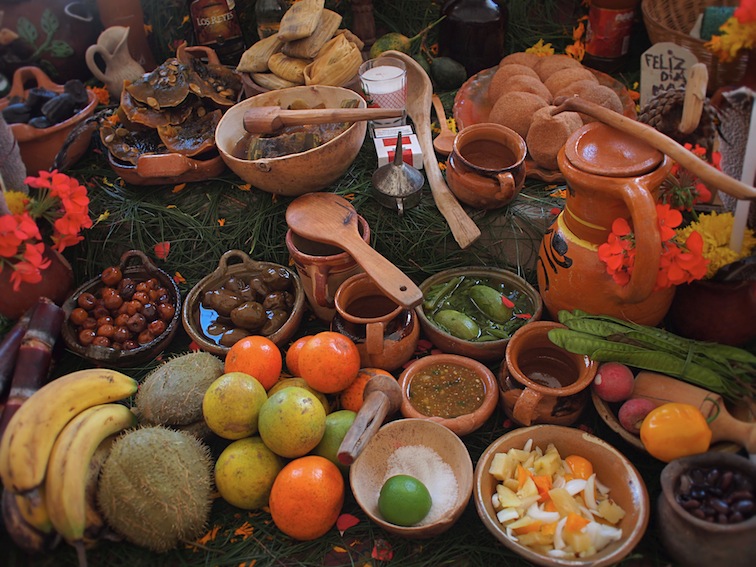 In San Cristóbal de las Casas, the Day of the Dead celebrations would be held at the Panteon Municipal. Wanting to visit before the full festivities were under way, we hopped on a “colectivo” and went to check it out.

To us, the first striking feature was the architecture. We saw the typical stone slab on the ground, but many graves looked more like proper houses than a resting place for the departed – some even had patios and benches. 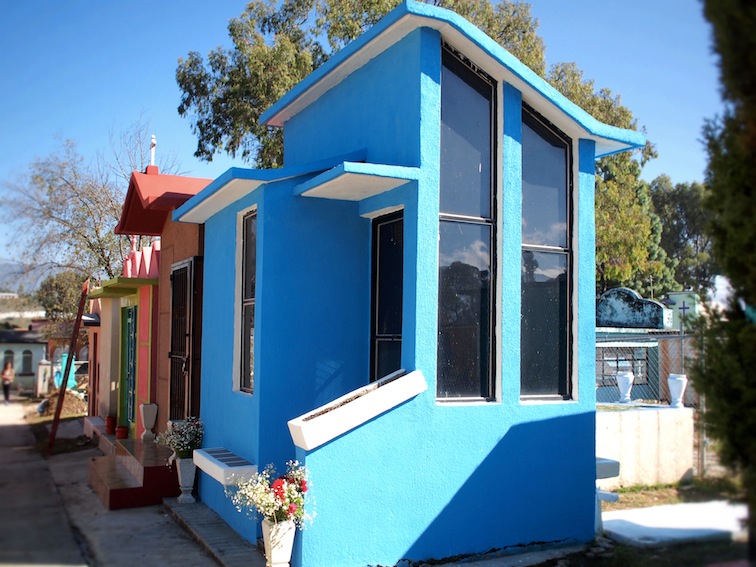 The richer ones were not only colorful but also bigger than some apartments in a European capital. 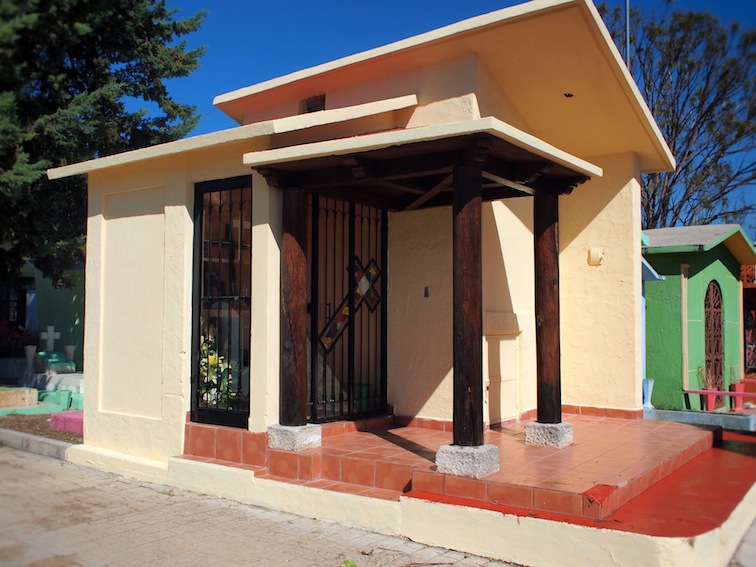 The 1st of November is dedicated to dead children, and is named Day of the Little Angels (Día de los Angelitos). Their relatives bring gifts and toys to the cemetery, and remember a life cut too short. 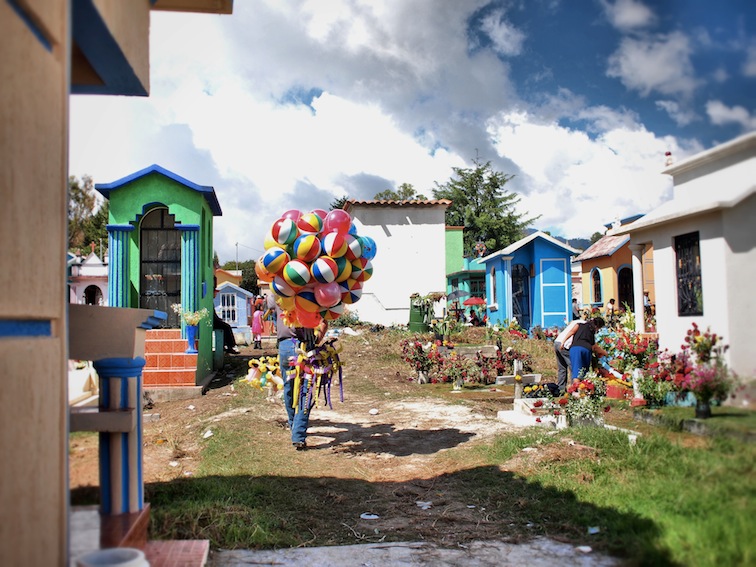 The 2nd of November is the big day, when the whole family descends upon the cemetery to not only remember their dead but also eat, drink and laugh with them.

This is by no means a morbid affair. Unlike what occurs in other parts of the world, in Mexico the dead are not feared, but welcomed. After all, they’re family, shortly stopping by to visit and have a taste of earthly indulgences. 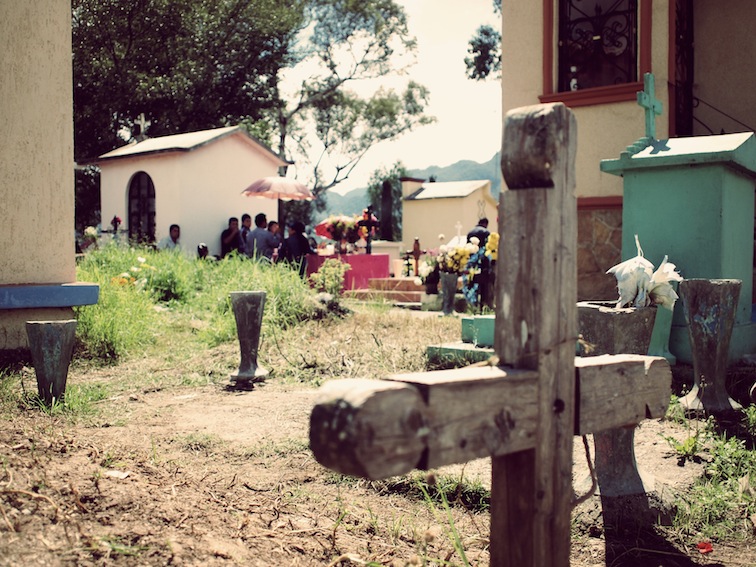 There is also music, to enlighten the spirits and praise the memory of those no longer walking our world. 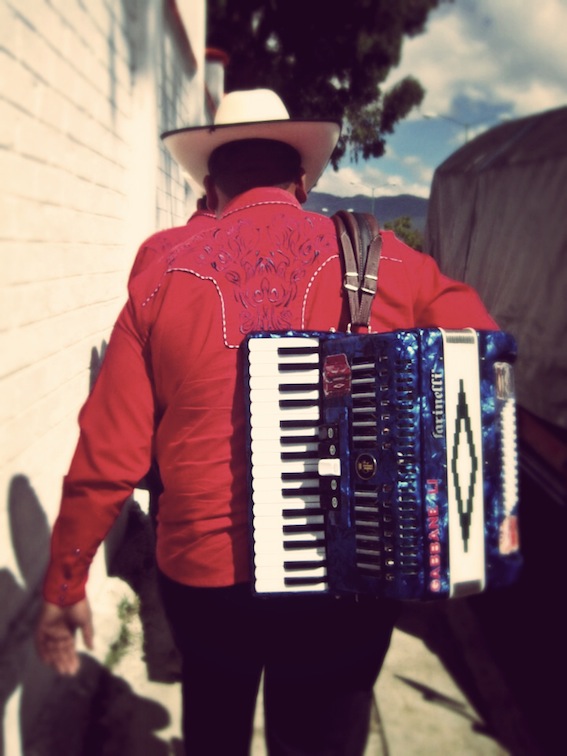 As the day progresses, several groups of mariachi roam the cemetery, singing songs of joy and sorrow. 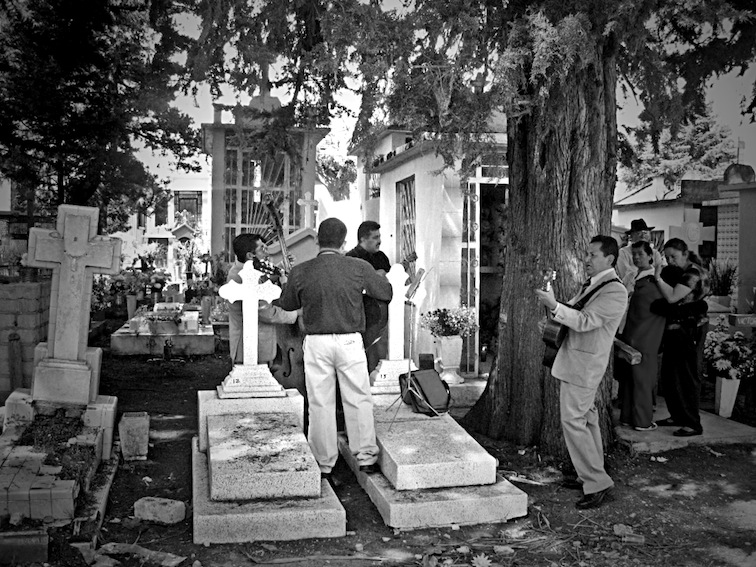 The cemetery shines in color for the Day of the Dead. Derelict graves are repainted in bright colors and flowers are placed in every nook and cranny, infusing the air with the fresh scent of the living. 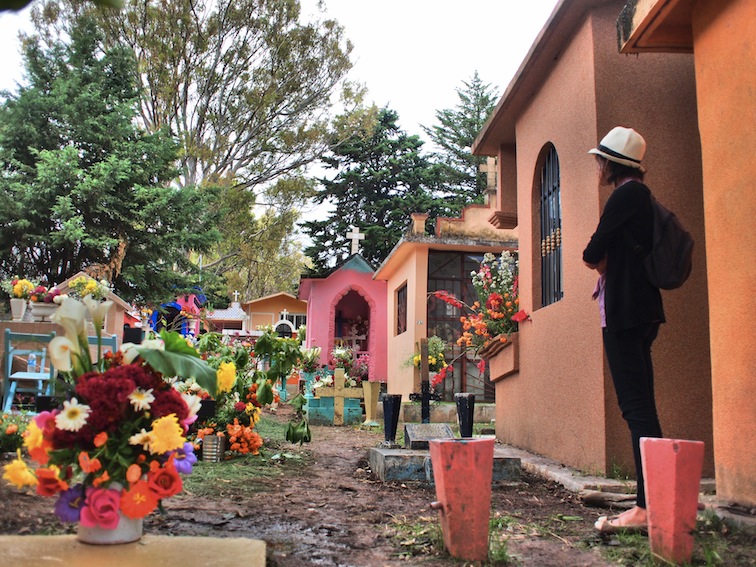 We meandered through the Panteon Municipal like friendly ghosts, trying to be respectful of our surroundings and smiling at strangers, who invariably smiled back as they tended to their affairs. 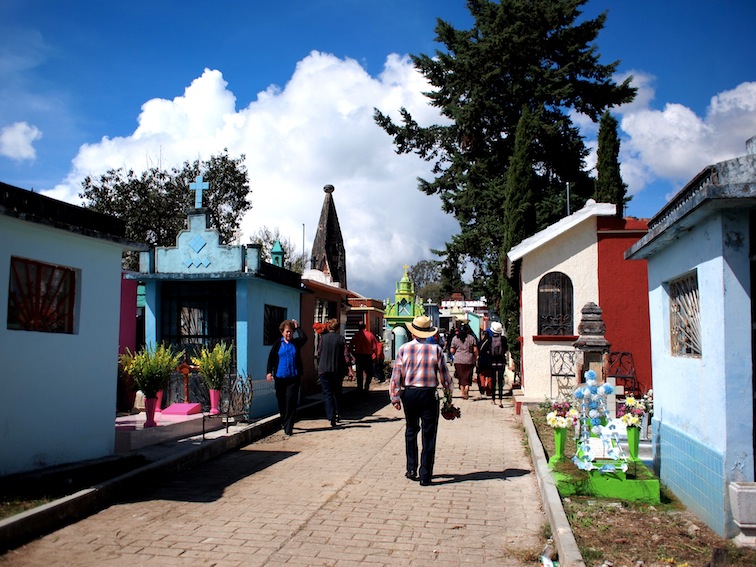 As the cemetery began to overflow with people bearing flowers, food and plenty of beer, the atmosphere became increasingly festive.

The Day of the Dead celebrations last well into the night, until the sky is lighted by candles and the last spirit says goodbye for another year, hopefully satiated and willing to once again embrace the ultimate truth. As the epitaph reads at the cemetery’s main entrance:

Life is an illusion

Death is the reality

Here begins the Kingdom of Truth 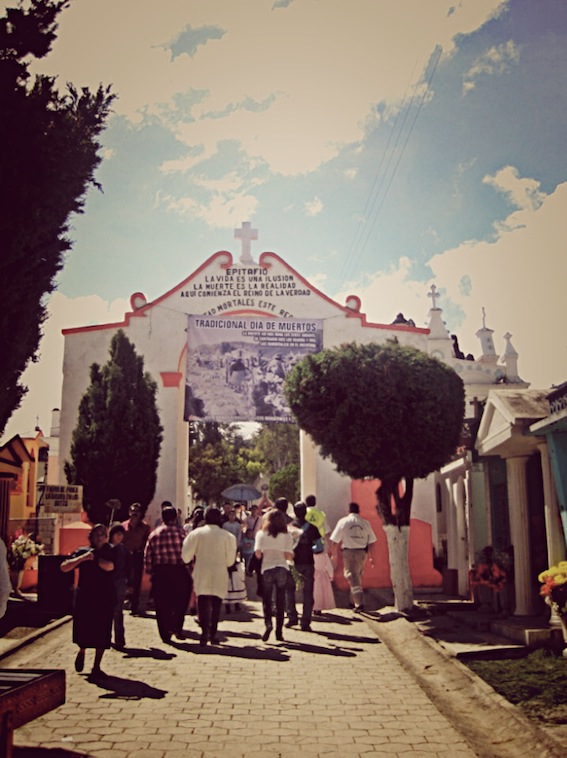