Kids on the Run

When not figuring out which color goes with vermillion, people throughout the world have been spending a lot of time discussing the economical woes of the EU. Enmeshed in all the talk about the eventual collapse of the Euro or the financial depravity of the PIIGS, the usual trumpets of doom have also sounded for the unsustainable idea of a peaceful and fruitful union between states with such diverse cultures and histories: a marriage seemingly made not in heaven, but in a chaotic office smelling of old paper and cheap ink.

Even though European history is nothing but promiscuous (invasions by foreigners with strange accents were an almost monthly staple for many, many centuries), people still buy the idea of an acute divide between the north, where everyone is a responsible workaholic willing to endure harsh climates and even harsher gastronomy, and the south, a geographically imprecise swath of land where everybody is more concerned about enjoying the plentiful sun than doing any actual work.

However, these contrasting stereotypes gain an extra layer when discussing the EU versus the USA. Here, the focus is usually between an EU, or a Europe as a whole, where rampant socialism is paramount and people count on their Government to provide for every little thing, and a USA where the purest form of capitalism reigns supreme – taken to its Randian extreme, anyone can become successful (meaning “rich”) if they put their mind to it, but failure is unacceptable and entirely your fault.

But, as politicians like to moan, what about the children? How are these cultural and societal dichotomies made real in their growing lives? Or, to make it simpler, is there a discernible cultural and social split between kids in the USA and in Europe? The answer to all these questions is probably written down somewhere, but I’m too lazy to find out. Hence, I’ll go on a tangent and make it all about how both versions of childhood (with a few forays into adolescence) are portrayed in (non-animated) cinema. 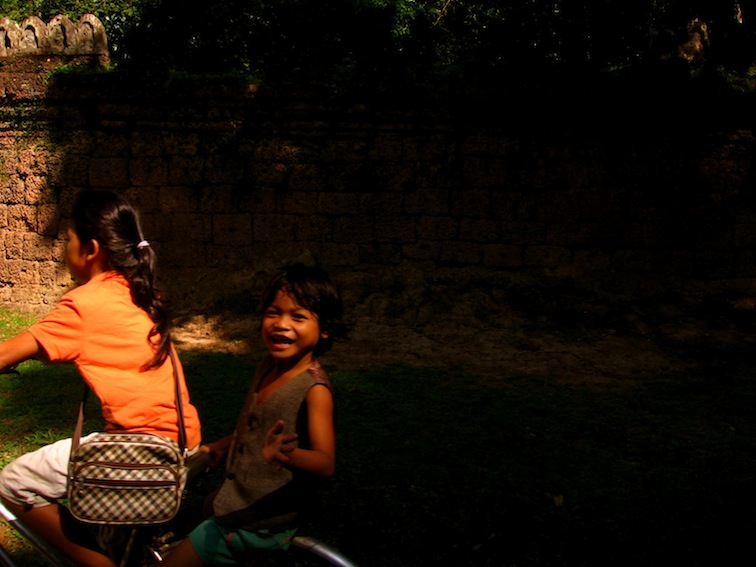 Barring notable exceptions, European children live in a black and white world. I don’t mean it in a metaphorical way, but in the sense that most emblematic films of childhood experience were made before the screen became suffused with color. The neorealist movement, usually equated with Italy but whose influence spread throughout the old continent, is responsible for many of the masterpieces dealing with that uncanny stage between infancy and adolescence.

These kids are offspring of working-class people, and their playground is invariably the streets, the fields, the outside world. They are always in motion, either running away or in perpetual chase. Their games are physical, and are played apart from the adult mass, who appear most of the time only to scold or beat or try to domesticate the hormonal surge. For instance:

Portuguese kids run amok in Aniki-Bóbó, adapting to brewing emotions and learning the value of friendship, as boys fight for a girl’s attention and theft becomes the easy way to gain respect and admiration;

In France, as magnificently portrayed in The 400 Blows, an old soul trapped in a child’s body must endure the boredom of school and conflicts at home while searching for a life he can call his own, even if that quest leads only to the sea and to one of most haunting final scenes in the history of cinema;

A couple of Italian Shoeshine boys get in trouble with the law while pursuing their dream of owning a horse, a symbol of their hunger for freedom and independence;

Moving away from gritty neorealism and dual tonality, children discover myriad colors and the lingering, ethereal world of what lies behind the door of human perception. The landscape opens up, but there is danger of being swallowed whole:

The Spanish countryside hides mysteries a young girl can only tenuously grasp, as the line between dream and reality becomes blurred when she comes to terms with the Spirit of the Beehive;

The Swedish winter’s light is deflected by Fanny and Alexander‘s rebellion and imagination, which may or may not have magical qualities – even if there is darkness lurking amidst the cacophony;

An English 15-year-old finds respite from emotional and economical hardship in the flights of his pet kestrel, Kes, only to see his dreams come crashing down to earth;

A German boy, surrounded by the madness of the adult world, refuses to grow up while furiously banging his Tin Drum.

All these kids share an impossible fantasy: to break free from oppression. They also share an unquenchable desire to understand the people around them and, perhaps more importantly, their own budding selves and the unnerving changes speeding through their minds and bodies. Their countries may be disparate, but their struggle is one.

North-American kids have a lot of baggage, at least in films. Like their European counterparts, they must abide by the rules enforced by those older than them, and are therefore nearly always devising ways to undermine whatever authority grown-ups think they have.

However, their emotional maelstroms are quite often fully voiced, relying less on symbols and the nebulous vocabulary of eyes and gestures. Also, not only do they have to fend for themselves, but many times they also have to assume the role of guiding figures, doing their best to keep adults out of trouble, making it sometimes difficult to ascertain who displays the more childlike behavior.

We are then faced with a plethora of lovable orphans who either partner up with adults in petty crime, as in The Kid, or help bring about repentance and harmony while holding a tune, as in Annie. Even when a parental figure is present, they are dysfunctional and hinder more than soothe the accompanying child, exploiting their talent for larceny, as in Paper Moon, or using them to attain redemption in life and on the baseball field, as in The Bad News Bears.

Although these lovable rogues are all prone to mischief, they appear on screen as pretty sensible characters, and are nearly always willing to prove themselves worthy of even the tiniest glimpse of affection.

When the bonds between child and adult are too frayed, a pet can also come to the rescue. In one the most famous cases, a boy becomes attached to a dog by the name of Old Yeller, their rustic tale of friendship mirroring all that is innocent in childhood. Alas, the relationship comes to a tragic end when the dog contracts rabies.

A small illustrative detour here: whereas in the British Kes, which shares a similar theme, the child must come to terms with childhood’s end and a life of powerlessness through the lonely death of his kestrel at the vicious hands of others, in the North-American Old Yeller the child gains entrance into the adult world by killing the very symbol of his innocence himself. He literally shoots his way into adulthood!

Taking matters into their own hands is a common thread in North-American cinematic depictions of childhood. This responsibility comes usually from a lack of trust in the adults hovering above, and is more evident in films dealing with the unknown or fantastic.

When adventure calls, grown-ups get in the way, and it’s up to the kids to extricate themselves from any precarious situation they may encounter. Their ingenuity is imbued with technical sophistication and a prodigious ability to befriend anything with a beating pulse, from aliens to luckdragons:

In E.T. the Extra-Terrestrial, a lonely boy and his siblings help a stranded alien find its way home while suffering themselves from the lack of one;

A ramshackle group calling themselves Goonies save their families from financial straits by stumbling upon a pirate’s treasure trove;

A quiet boy embarks on an extraordinary journey to a fantasy world where he becomes a valiant hero and soars to the skies with a mystical furry creature in a NeverEnding Story;

These kids go through extravagant adventures where the impossible can seem conventional. Childhood may be coming to a close, but the memories will remain, as will most of the friendships, together with the certainty that they once came across a magical world which may be reachable again.

Of Monsters and Children

So what of the differences between kids in the USA and those in Europe? They seem to have a lot in common: they are all running towards adulthood, although with the occasional stumble; their role in the world is yet to be fully written, but they are scrambling for a pen; family is an unstable institution, and mostly fails to provide a safe haven from the cruelties and enigmas of the outside world; they try to stick together, and hardly anything is more valued than true friendship.

However, there is one element which divides the two continents’ cinematic experiences as deeply as the Atlantic ocean – imagination. Whereas European children’s fantastical dreams are just another step in their race to escape the harshness and mysteries of real life, only rarely inching towards the probable, their North-American equals actually do find magical creatures, befriend aliens and find a pirate’s treasure. These are not figments of their imagination, but form an actual part of their realities.

The lesson derived from a great deal of North-American classics is that dreams can come true, but only if you are resilient and pure of heart.

The children of Europe can only get brief glimpses of the magical world, and they are usually mere illusions stemmed from overactive imaginations. Once they wake up, the mist lifts and they are left where they began, alone and still bewildered – or even dead.

There are also monsters in Europe, but they are not magical creatures. Instead, they are adults bent on destruction and unimaginable cruelty, as seen for instance in the magnificent Au revoir les enfants, where schoolchildren must deal with the realities of Nazi oppression.

One could argue that the Spanish Pan’s Labyrinth is one example of a European film depicting a childhood surrounded by magical creatures. However, the fantasy world is too much of a mirror to our own real world, and too much like a dream, or worse, a deadly trap.

They’re on a horse

Ironically, it’s the European kids of the neorealist movement who are infused with the spirit of one of the most iconic North-American literary creations: Huckleberry Finn. For all the sparkle of enchanting creatures and mystical beings springing to life, there is something truly bewitching about the sight of two ragged shoeshine boys parading on top of a horse, beaming proud, keeping the adult world at large for a few precious moments more, confident in their resourcefulness but unaware of tragedies to come…