The Blue Fire of Santorini

Santorini had a near mythical status in my childhood mind. The Greek island of Thera, as it was named in some old book I chanced upon, was apparently the last remnant of the ancient kingdom of Atlantis. As I read more about it in pre-Internet times, a few images began to firmly embed themselves in my construction of a mystical land. First, the vertiginous brown of a collapsed caldera. Second, the bright blue shimmer of a sea riddled with history and mystery.

Fast forward to many years later, and Santorini is now some times acknowledged as a tourist trap by the Aegean Sea. I had read the articles, seen the postcards, watched the wedding videos. Yet, the memory of an enigmatic fire-island still lingered at the back of my head.

My association of fire with Santorini was born, as it usually happens, from a misunderstanding. To be more exact, a misprint. Reading it was a volcanic island, and soon realizing the Greeks had a propensity for multiplying geographical designations (Santorini, classically named Thera, currently Thira), I stumbled upon the name Fira in a tattered photo of a cliff-perched town. However, the caption under a dazzling white agglomerate of houses atop a cliff read Fire. In my young mind, Fire was now just another name for Santorini. Since at that age it made more sense than something like Thira, Fire stuck. My imagination ablaze, I vowed to one day sail into the Santorini caldera. Only much later did I realize Fire was actually meant to be Fira, Santorini’s main town and notable cruise-ship destination. 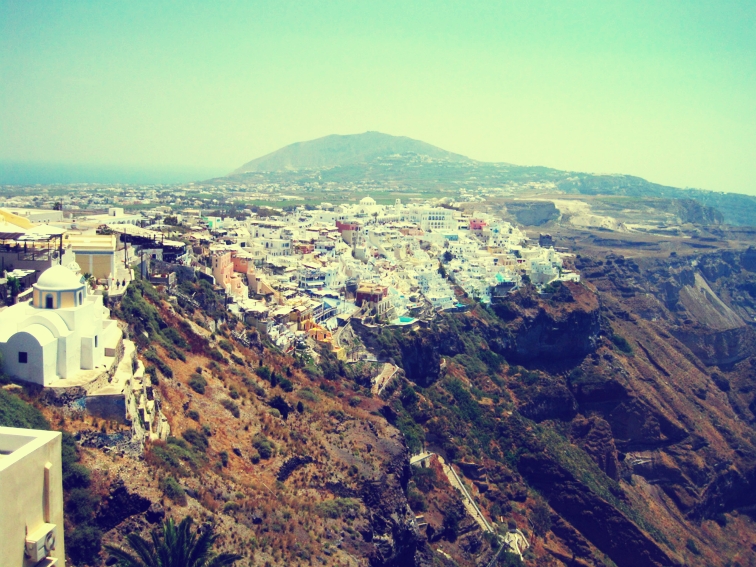 The vertiginous cliffs of Santorini

After elbowing the crowds at the Parthenon, we set out to Santorini by ferry. We left the port of Piraeus and, after short stops at Paros and Naxos, made landing in Santorini 5 hours later. In the port of Athinios, buses and taxis took the newly arrived to the upper levels of the island. We took the bus and, after several zigzags through a vertigo-inducing road, finally found ourselves atop Santorini and on our way to Imerovigli.

We chose Imerovigli due to its quieter nature and celebrated sunsets. We spent most of our time walking through its narrow corridors, glancing into the caldera. Its moniker of Balcony to the Aegean is well-deserved. The vista is indeed both quaint and gorgeous. There is not much to do except eat, drink and drift under the sun. We did all three aplenty. Our favorite restaurant during our short stay was La Maison. Delicious food, a stunning view and the opportunity to savor a slow sunset – if not heaven, close enough. 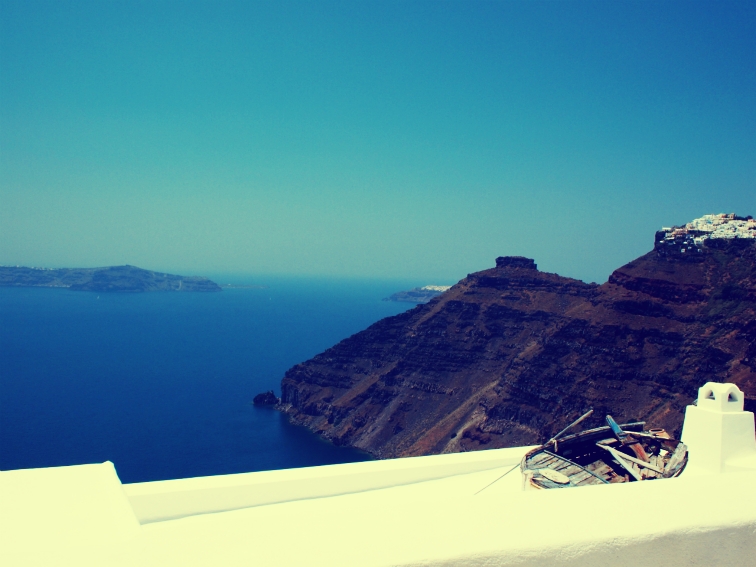 The lost boat of Santorini

We also enjoyed the apparently comfortable relation the island’s inhabitants have with the many, many stray cats seen throughout its streets and rooftops. While on our nightly promenades, we bumped into restaurant waiters giving scraps to a circle of hungry felines. Nevertheless, the sultry climate of the island is conducive to amorous fires, and they are not easily extinguished. Hence, we saw at least one cat orphanage tending to the unlucky ones who could not fend for themselves amidst so much competition.

Watching the deserted island of Nea Kameni in the distance, I realized the flooded Santorini caldera would be more akin to my childhood imagination without the gigantic cruise-ships lying scattered in its waters. Santorini is an obligatory stop in most Mediterranean cruises, and the flood of incoming tourists is felt throughout the summer. Escaping the afternoon onslaught, we descended to the Old Port. The route can be done on donkeys, but we opted for a quick dash to the bottom, careful not to step on any fumigating excrement. 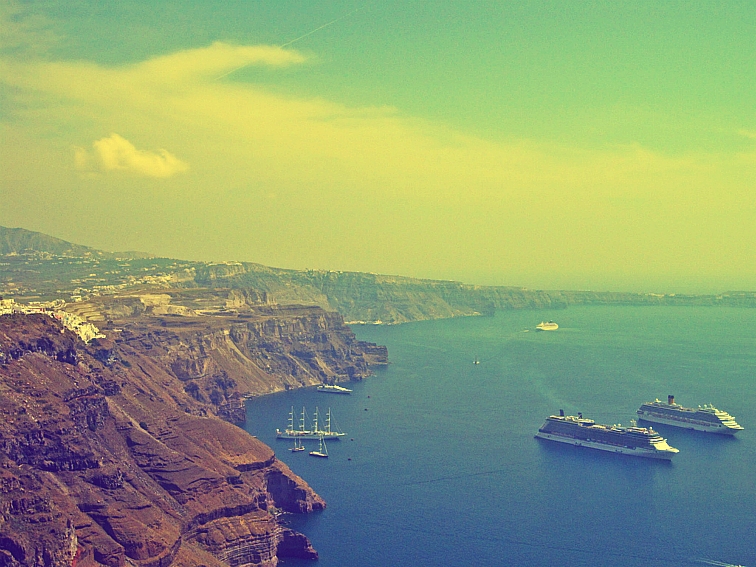 The cruise ships abound in Santorini

We found the The Old Port peaceful and picturesque. After spending so much time gazing below, we were now finally at sea level. After a drink and a little sightseeing, we ascended by cable car. There were hardly any people around, so it was a quick ride, and the view was once again magnificent. 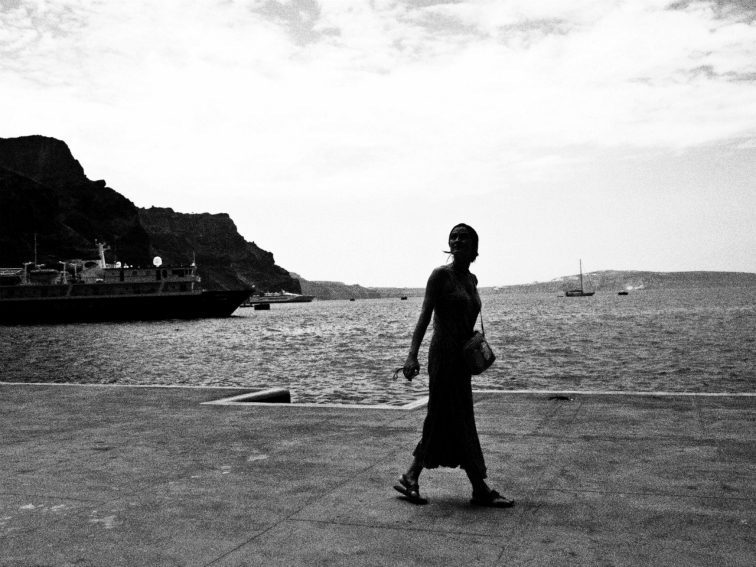 Fira is busier than Imerovigli, but even then we did not feel too crowded apart from the most central of places. After a few minutes wandering through the white and blue pathways, we found ourselves often on our own. What we did notice was a great number of Japanese honeymooners, taking endless photos by some of the most iconic sights.

Although Santorini is nothing like my childhood land of ruined civilizations, it still manages to remain relatively unscathed from all the hullabaloo surrounding it. As we could attest, its beauty is undiminished. Also, even the busiest places can quickly lead to serene corners populated only by sauntering cats – the true owners of the fire-island of Santorini.