A long time ago, I got offered a dog for Christmas.

It was not a gift from my parents, mind you – he just happened to be passing by, and must have taken the smell of burning wood flowing through the half-opened door as an informal invitation to enter.

He was a fuzzy little thing, shaking under a mantle of fur, electric from the cold wind howling outside. Mother was not very fond of dogs, but since he was fairly clean and polite she let him join us for the evening gathering. He did not come all the way near us, sitting instead halfway through the table and the door, sniffing the air for hidden mischief.

When father threw him a piece of warm codfish, he tiptoed towards it and placed it carefully in his mouth. Mother stopped her wine from reaching her mouth, looking at the stain of grease on the floor. She turned her eyes to father’s hairy nostrils and gulped her wine.

“Thank you”, the dog said, bowing his head a little. He then took his meal to a corner of the room close to the fireplace. As we continued eating, the dog’s presence became less and less conspicuous, my parents seeming more interested in pouring more olive oil into the potatoes and more red wine into their glasses, all the while arguing about our plastic mistletoe.

Obviously, I couldn’t eat properly, distracted as I was by this quiet stranger sharing our Christmas Eve. I played with the potatoes, mashing them and drenching them in olive oil and vinegar, making tiny figures resembling cats and eating only their tails. Young as I was, from all the questions circling around my mind none was more important than the one I finally managed to blurt out after some considerable time: “What’s your name?” I asked (or whispered, depending on who was listening). The dog raised one ear, turned his eyes from the orange glow and said “A friend of mine used to call me Docks”.

“Socks?” father shouted, perhaps thinking the dog was deaf; “well, that’s a great coincidence – the neighbour’s cat is also called Socks!” Father was well on his way for a nasty hangover…

At that moment I decided to wait until I would have some time alone with the stranger by the fireplace. After at least two more bottles of wine and two broken glasses, father lit his cigarette and mother punctured her soufflé, each contemplating how to shoot the other in the heart.

Sensing an opportunity, I sneaked away from the table and crawled on all fours towards the dog. He saw me approaching from the corner of his left eye, replying “Hello” when I shyly mumbled “Hi”. I gave him a slice of strawberry cake and asked him about his name. He thanked me and, as he took tiny bits from the cake by now nestled between his paws, explained he once had a friend who was a fisherman. He had taken him as a pup, when he found him drifting through the fish bowels scattered on the docks of his village by the sea.

When I questioned him about the fisherman, he said he had gentle hands and enjoyed the smell of seaweed. “Where is he now?”, I asked. The dog paused a moment to lick his red-stained paws and scratch his ears. 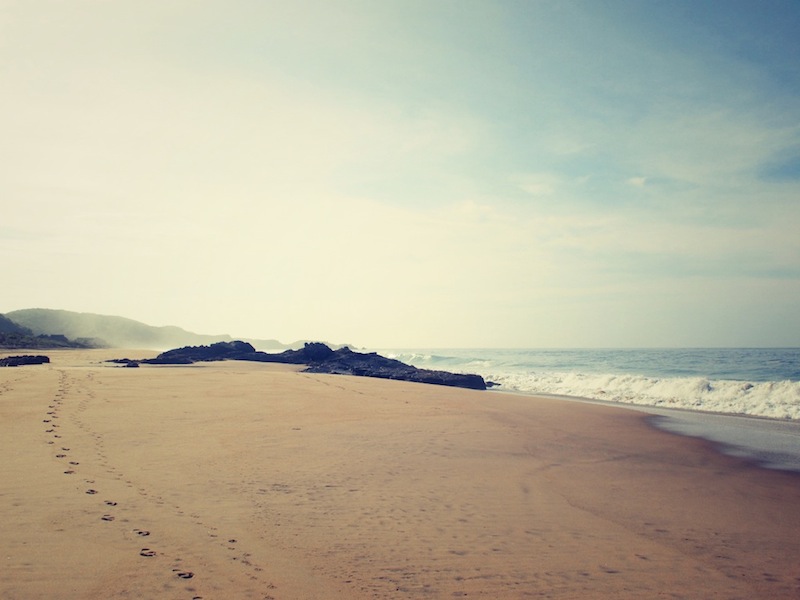 He then told me the story of the fisherman – how they spent many days together fishing in the open sea, selling fish to restaurants nearby or, later on, bikini-clad tourists on the prowl for “authenticity”; how he had taught the dog the ways of the waves and the consequences of the moon, and how they had once found a starfish who made really good jokes.

I knew it was probably stupid or insensitive to ask, but curiosity always got the better of me. The dog stared at the fire.

“He had a wife once, before we met. She was not from the village, but from an island far away. She never told him which one, though – not that he cared, of course, being too enthralled by the depths inside her eyes to think about homelands and other harbors.

In the mornings, I always saw them either wrapped in blankets or in each other’s flesh, so I guess their sleep must have been very peaceful. They lived together for a few years, until she disappeared on a sunny morning in the middle of December. He had slept late, and she had left him a note with the drawing of a seahorse and the words Love, gone swimming.

He didn’t go out to sea again. A few weeks later he got a job at the fish market, where the waves brought only death and sustenance.

Last Christmas, four years after she had been gone, he put me in his lap and hugged me, caressing my spine with the palm of his hands. He said he had dreamt of her arms around him, and had to get his boat to search for her. Her hair smelled of seaweed, he explained to me. I begged him to let me go with him, but he just kissed my head and left.

The sea was very quiet that morning, and I wagged my tail at him from the shore, wishing him luck. He rowed and rowed, sometimes with only one hand when waving back at me, as his boat kept getting tinier and tinier, until all I could see was a shimmer melting into the ocean… and he never came back.”

I didn’t feel like saying anything, but since he seemed a bit tired I asked him if he didn’t mind sticking around for a few days. He gave me a shadow of a smile, saying “Only if you promise not to call me Socks”. That made me laugh, but I assured him I would never call him by any other name except his own.

We sat gazing at the flames dwindle and stopped talking. Shortly afterwards, he put his head on my lap and fell asleep.

At the table, mother and father were fidgeting with plastic mistletoe, trying not to look each other in the eye.