Anyone who has been following our travels through Mexico may have noticed we’ve mentioned chocolate a couple of times. OK, fine, plenty of times! It’s not really our fault though: the world’s infatuation with chocolate began in Mexico, after all.

Cacao beans were first grown as a crop by the Olmecs. Later, the Mayans grounded the beans and made it into a drink for the upper classes. Following the Mayans’ footsteps, who established vast cocoa plantations in the Yucatán, the Aztecs also took a liking to the bitter beverage. It was only after the Spanish got involved, back in the 16th century, that sugar became part of the fragrant concoction. The rest, as they say, is History…

Although we’ve been trying different types of chocolate since our days in Oaxaca, it was in the colonial town of San Cristóbal, in the state of Chiapas, that we took our gluttony a step further and learned how to make our own chocolate bars.

Following a memorable coffee tour, we once again made use of the cultural excursions available at Posada del Abuelito. For 250 MXN/15 EUR each, we headed out to Museo Kakaw, where we would join a chocolate workshop. 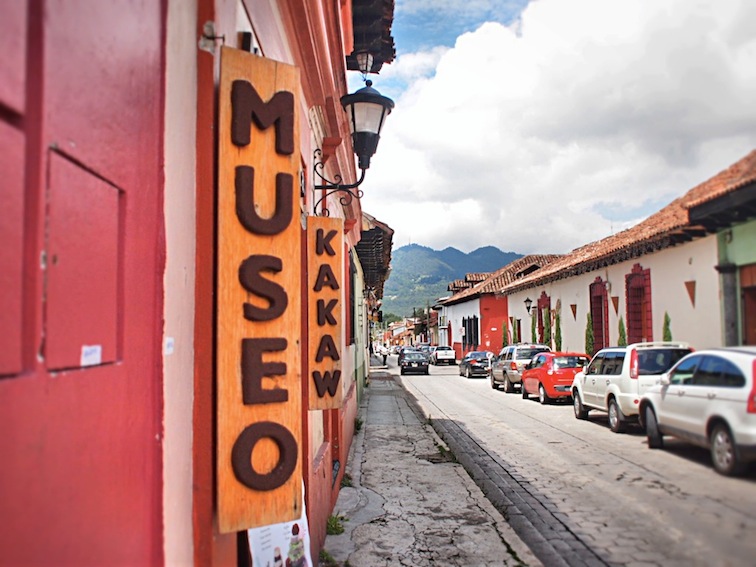 Shortly after an introduction to the history of chocolate in Mexico, we were given the option to choose fermented or non-fermented cocoa beans. We picked a large pile of fermented cocoa beans, since they are sweeter, and proceeded to get rid of the ones with cracks in their shells. Once our selection was complete, they were roasted, so we could eventually remove the husks, leaving only the already appetizing dark nibs.

The next stage was grinding, followed by the addition of sugar. We wanted our chocolate dark but not too bitter, which made us decide on 70% cocoa and 30% sugar. After mixing, we took to the grind once more. I’ll admit it was hard not to stop the whole thing and start gobbling up the chocolate already. The smell was sweetly overpowering.

By the time we slowly melted the chocolate in a double boiler, I had to keep checking myself not to take the bowl and run. Chocolatiers must have amazing self-control. Just to spice things up a bit, we also added a few coconut flakes, which were thrown into the mix as it continued to melt. When our tutor was happy with the temperature, Elle poured the chocolate into plastic molds, careful not to spill anything. The molds were then taken to the freezer, in order to solidify quickly. They would be ready in 30 minutes.

As we waited, there was time to watch a small documentary on a plague which destroyed most of Mexico’s cocoa plantations, meander through the tiny museum and discover that Ivory Coast is the top producer of cocoa in the world. Well, I did not know that…

Finally, our chocolate bars arrived, neatly wrapped in plastic. Before you start making any assumptions, I can guarantee we did not eat everything immediately. We are still capable of some restraint (no, really!), and decided to try out the fruit of our labors later in the evening.

Unsurprisingly, it was as delicious as we expected – rough and not too sweet, with the coconut flakes adding a bit of exotic flavor and crunchiness. Yum!

As an inadequate appetizer, here’s a silly video highlighting our delectable exploits (aka How to Make Chocolate in 9 Easy Steps):

Chocolate Workshop in San Cristobal from Lunaguava on Vimeo.