This is the current state of affairs: we are now on our second week in San Cristóbal de las Casas, in the Mexican state of Chiapas, and have just extended our stay for another week. We can’t seem to leave, although the rainy season has finally caught up with us – a not particularly surprising feature, since the town sits 2,200 meters above sea level.

What makes San Cristóbal so enticing? The answer to that would not fit into a single post, or even a Wikipedia entry. Between indigenous locals, fantastic food, gorgeous landscape, shadows of the Zapatista movement and a brimming cultural scene, we have found many things to love, while also feeling we are only scratching the surface of what San Cristóbal has to offer. Hence, like in Puerto Escondido, we’ll begin with a light introduction. 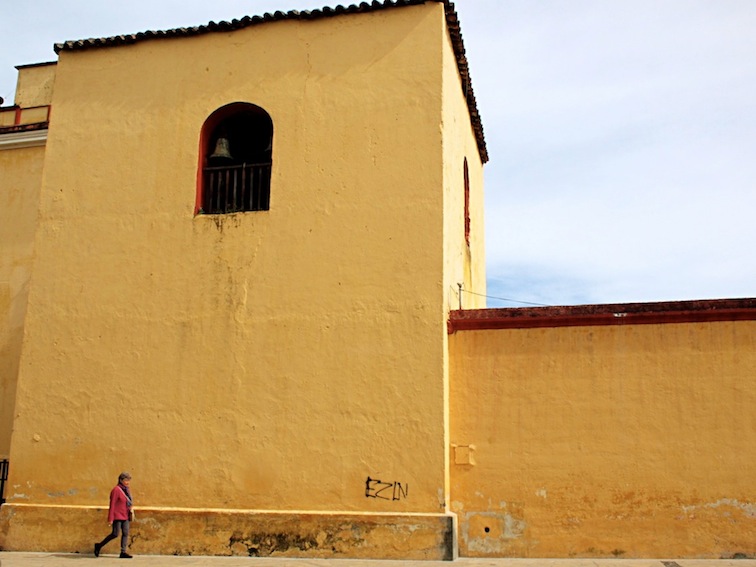 The pious and the revolutionary in San Cristóbal

On a valley surrounded by beautiful hills, cobblestone streets and multicolored colonial houses with red tile roofs create a charming mosaic of history and culture. The indigenous population, mostly comprised of Tzotzils and Tzeltals, can bee seen wearing their traditional garbs throughout the vibrant streets of the historical center, and especially in the local market, where their colorful clothing varies according to their place of origin.

Many landmarks can be found scattered around town, usually of a religious nature, but the area around the Zocalo is the usual nexus of the biggest and the brightest. The City Hall’s white arches accommodate various street vendors and the occasional protest, whereas the majestic Cathedral remains an impressive sight and a preferred meeting spot for the local populace. 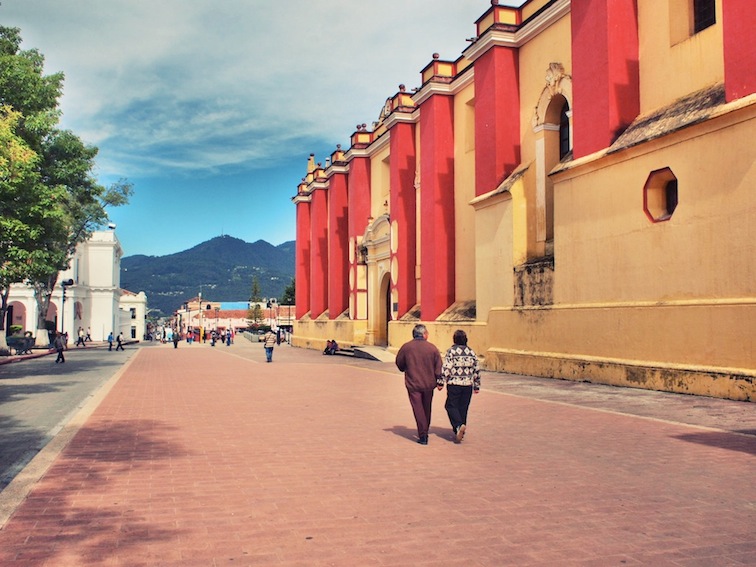 Between the Zocalo and the Cathedral

On a Sunday, we chanced upon a festive ensemble of musicians gathered by the Cathedral’s main doorways, letting the towering solemnity close by become infused with the lounge melodies of several xylophones. As people sashayed under the morning sun, the pious kept mumbling their silent prayer inside. Soon, the roles would probably be reversed.

Perhaps the most striking building in town is the church of Santo Domingo, whose stucco facade is adorned with ornate structures and figures, hovering above a sprawling handicrafts market displaying a great variety of indigenous products. 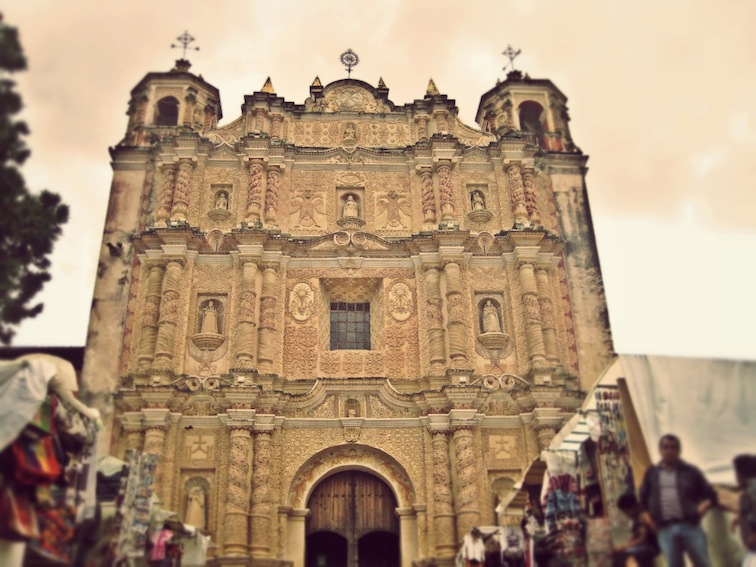 Apart from tourism, the town’s trade revolves around coffee, jade, textiles, amber and that most precious of delicacies – chocolate. We have so far embarked on a coffee tour, which took us away from San Cristóbal and into the lush mountains surrounding it, and participated in a chocolate workshop, which taught us how to prepare our very own scrumptious chocolate bars.

These little entries into a fascinating culture have been facilitated by the friendly and knowledgeable folks at Posada del Abuelito, our current abode and one of the reasons we are now transfixed by all things within the generous valley where San Cristóbal lies. It’s one of the nicest places we’ve ever stayed at – rustic, charming and cozy -, although hardly luxurious. In fact, it reminds me of a shepherd’s house, all rugged stone and wood, practical yet accommodating. 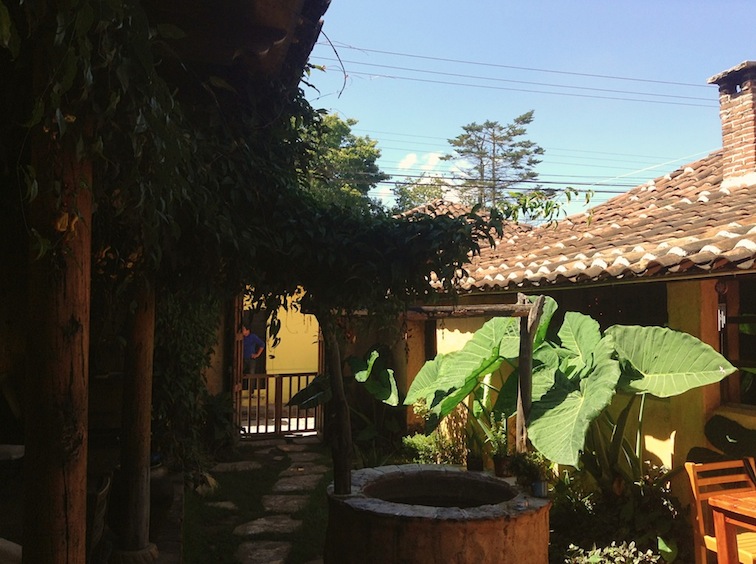 The atmosphere is lively, but very much unlike the party scene we found in Puerto Escondido’s hostels. Here, by the old well in the garden, we’ve befriended particle physicists, long-distance cyclists, social workers, dynamic duos of mayhem and hilarious Frenchmen, and spent an evening chatting with a middle-aged couple who have been sailing around the world for the past seven years… It’s an eclectic crowd, but strangely enough it all adds up to a remarkably comfortable stay.

The local market is the place to experience a great deal of the diversity San Cristóbal is renowned for, which can be immediately perceived not only by the vendors’ clothing but also by the wares they sell. Luscious fruits and vegetables abound, not to mention spices and chiles of varying size and color. Meat also reigns though, as evidenced by the amount of lifeless chickens stacked in neat rows, their necks hanging loose, drooping to the floor.

None of these things really explains San Cristóbal’s appeal. Other Mexican towns we’ve been fortunate to see share similar characteristics, such as Oaxaca or even San Andrés Cholula, but there is a uniqueness to San Cristóbal which we are finding hard to fully grasp. Maybe that’s why we’re still here, turning its corners, trying to understand it.

We’re not alone in this uncanny fascination with San Cristóbal. There are many expats around, going about their daily lives, finding themselves renting a room after their curiosity had been spiked by casual strolls along Real de Guadalupe, one of the main thoroughfares linking the past and the present in San Cristóbal. 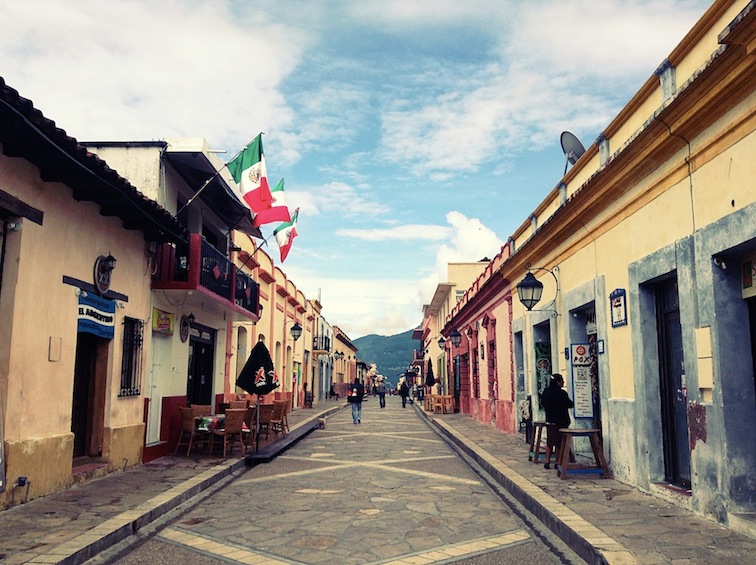 Everything is undoubtedly picturesque, which partially explains the tourist crowds, but poverty and even destitution are also evident. The native communities, for all their radiant attire, are still plagued by the usual cultural issues arising from a forced contact with the callous forces of neoliberalism and capitalism. It’s perhaps useful to remember that a postcard frequently needs retouching… 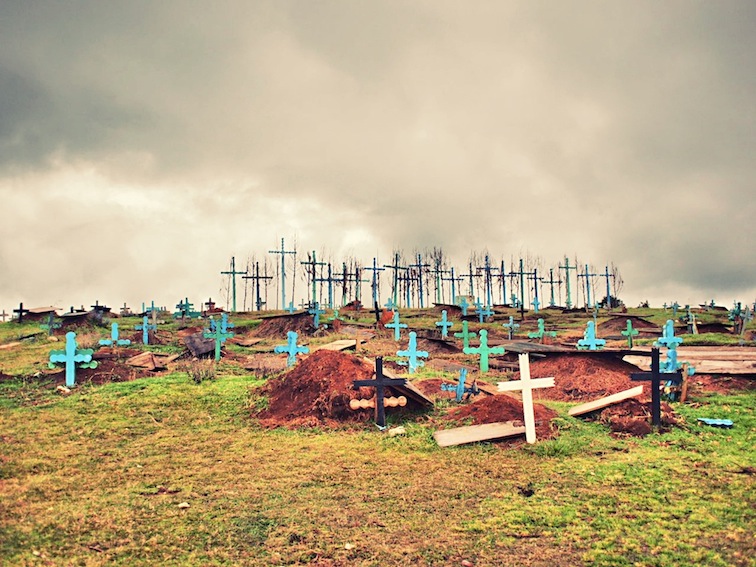 Mayan cemetery on the outskirts of San Cristóbal

And yet, and yet…

High up on a hill, the Guadalupe Church offers delightful views of the narrow streets and vivid hues of San Cristóbal. We climbed its seventy nine stairs one balmy morning, to get a glimpse of its neon altar and enjoy the sun’s blessings. It was a beautiful day. 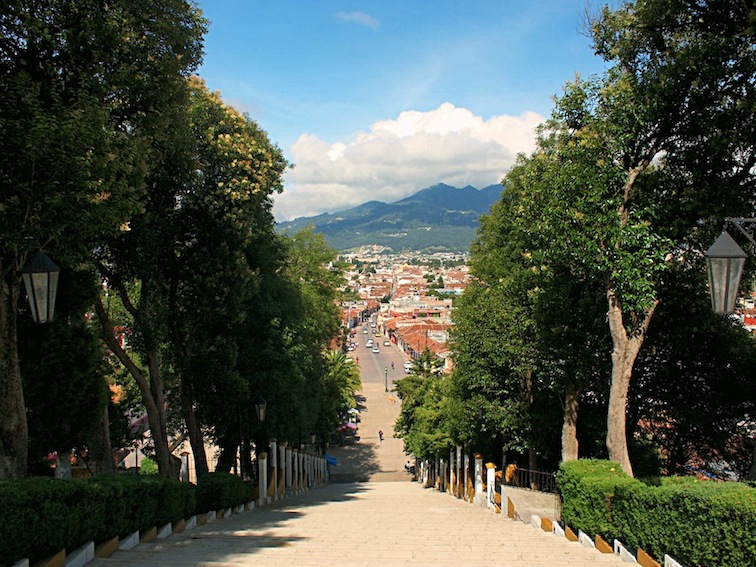 Descending, a ragtag group of school-kids practiced some cacophonous march in the square below, and as we passed them on our way home we saw huge clouds assembling, already threatening the impending afternoon deluge. The sun would soon be gone, as it did most days, replaced by rain hitting hard on our bodies, followed by slippery sidewalks and a chilly evening only bearable while wrapped in thick blankets – and yet, somehow, we were absolutely fine with that… 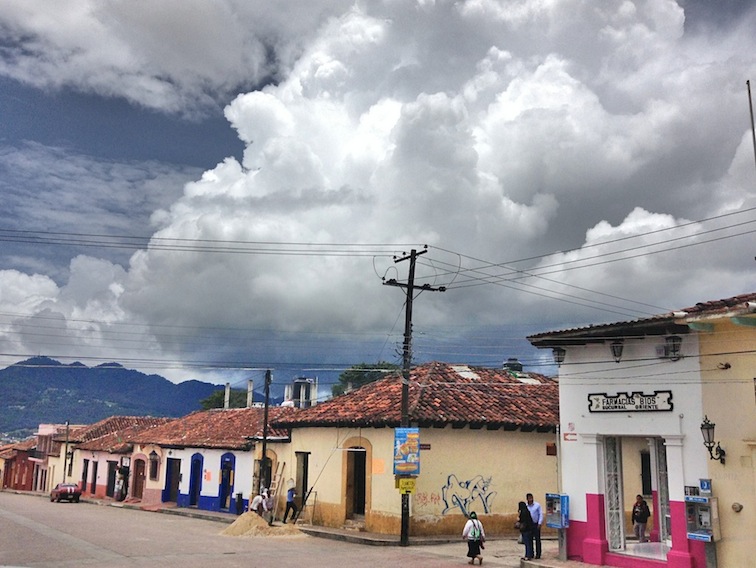