The endless horizon. How I longed for it, stuck in the sinuous, crowded roads of the European continent… Before departing to Mexico and thus beginning our long-term travel in earnest, I subjected Elle to ridiculously high temperatures, sleepless nights and hallucinatory landscapes as we drove from Las Vegas to the Grand Canyon, and then back again toward San Francisco, finally descending to the city of Los Angeles. 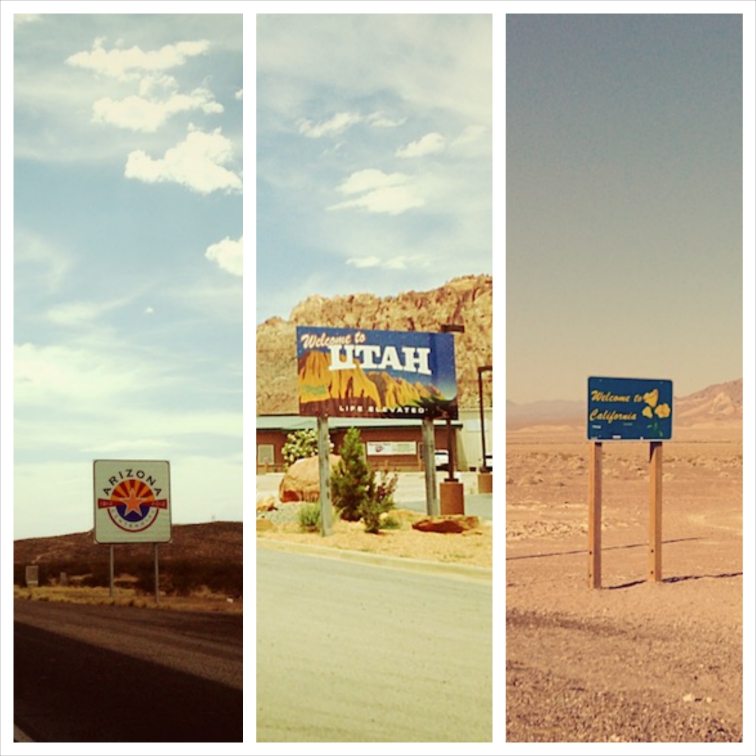 As lifelong dreams go, this one was remarkably easy to accomplish. We encountered no issues on the road, while our car proved to be both sturdy and nimble. Minus a couple of mild and luckily unnoticed traffic violations, we ended up having a startlingly smooth adventure.

Having had a few days to let the dust settle down, here’s a brief rundown of our frantic road trip through the North-American West: 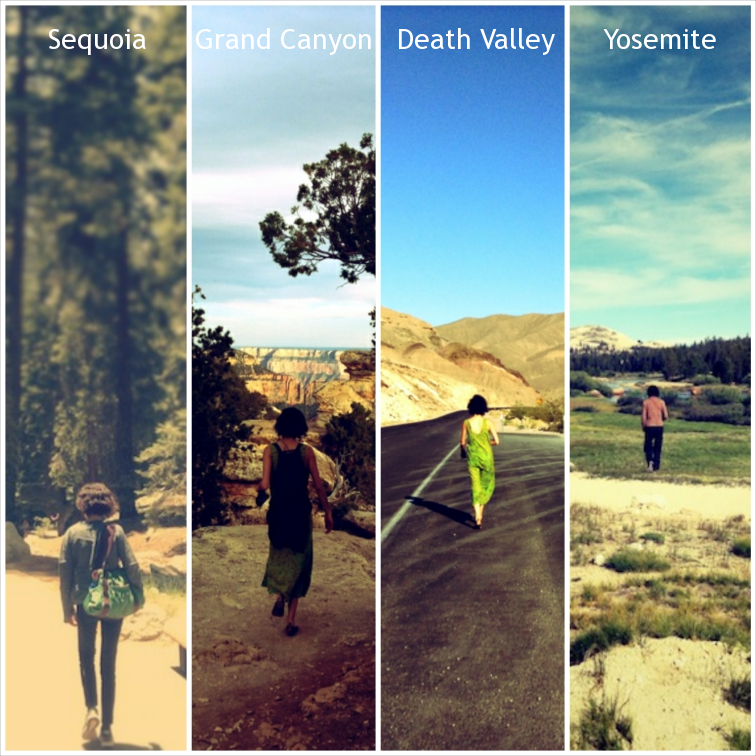 Below are a couple of maps, to get an idea of how big and at the same time how small our trip truly was.

In order of progression: 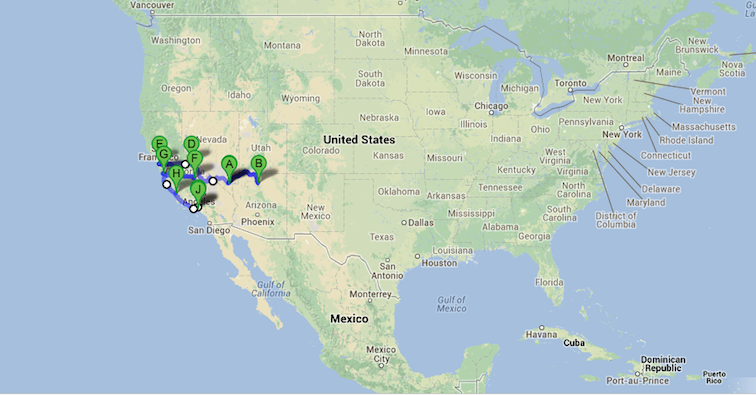 How to Get Around

However, in order not to get lost every 5 minutes we pulled a (geek) MacGyver and devised an idiotic solution which nevertheless proved suitable to our needs and was ultimately responsible for the success of our mad journey. Basically, we would set up a route on Google Directions, tweak it to suit our needs (ex: if you search Las Vegas to June Lake, the advised route does not go through Death Valley), save the instructions as a clean PDF file, move it to Dropbox and finally sync it with the iPod Touch. Elle would then try to understand the directions (which way is Southwest?) while I would try not to crash into anything that would leave a permanent dent on our car.

Want to know how easy it was to spot a tourist on the road? Apart from the gigantic RVs sweeping the long, vast roads of Nevada and Arizona, there was one sighting which became synonymous both with our trip and the widespread idealizations of the common tourist: a shiny, muscular and mostly red Ford Mustang convertible. 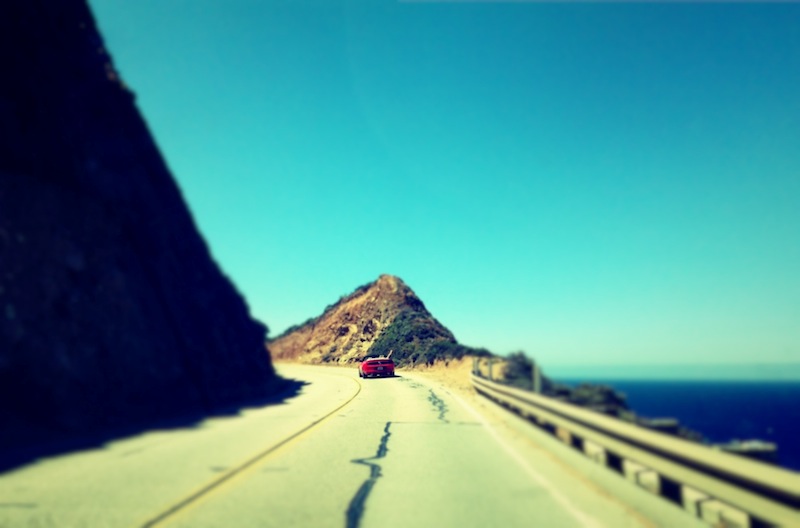 We saw them everywhere, in myriad colors but most of the time in sparkling red. Early in our trip, having noticed the trend, we began to shout “Mustang” whenever we spotted one, but it soon became a tiresome game, since they were swarming the roads like locusts. By the time we got to Big Sur, they had become as ubiquitous as the granite in Yosemite.

Apart from Las Vegas (hotels) and the Grand Canyon (cabins), we stayed in cheap(ish) motels. They displayed varying degrees of seediness, but were ultimately a surprisingly innocuous choice. By being normally close to main roads, we managed to escape the dreaded downtown traffic madness. Plus, they had free parking and free (albeit skimpy) breakfast.

Las Vegas probably wins this one. Although the natural formations of Zabriskie Point and the hectic metropolis of Los Angeles were mystifying in their own right, Las Vegas proved to be completely alien to us. It is both effervescent and supremely bleak, flamboyant and melancholy. Having traveled a fair share of our extraordinary world, we were left with the impression there is no place like it on Earth. 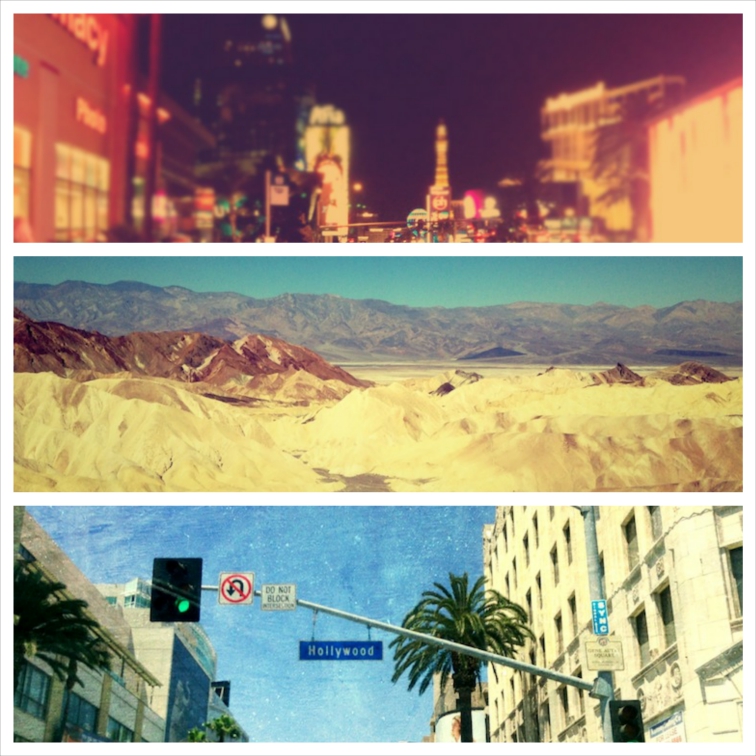 When we first got our dependable Chevy, I felt the title of our journey should be “Granny Takes a Trip”. Automatic shift and reckless adventure do not appear together in my book. Plus, what was I to do with my left leg, resting idle in the carpeted corner, undoubtedly feeling desolate and despondent? I never solved that particular problem, but on the second day I discovered (by sheer nosiness) a solution to our dependance on random (albeit usually, er…, religiously inclined) radio choices: hidden in a dark recess between the hand brake and our seats was a tiny USB port, which in a rare moment of lucidity I equated with… music from our old iPods! And so, after scrambling for a cable, we embarked on a different road trip – one with a soundtrack of our own choosing.

Becoming target practice for a fighter jet while driving lonesome through Death Valley was… interesting. That shapeless pilot was either a jackass, a Top Gun enthusiast or just having a really boring day. Maybe all of them. We’re still unsure if we should be upset or grateful for the experience. As the days go by, I’m increasingly leaning toward grateful. C’mon, how many of you have had a sonic boom happen right above your heads while trying to control a moving vehicle and dealing with severe hearing loss? OK, maybe I am still a bit upset…

Throughout Arizona, Utah and Nevada, we came across several desolate small towns, usually flickering in the scorching desert and displaying signs reading “Population: 54” or other such meager number. We were left dumbstruck by these arid pieces of Americana, seemingly vacant of people and earthly indulgences. They looked like lost shells scattered in the dunes, waiting for the wind to lift them back into the sea. 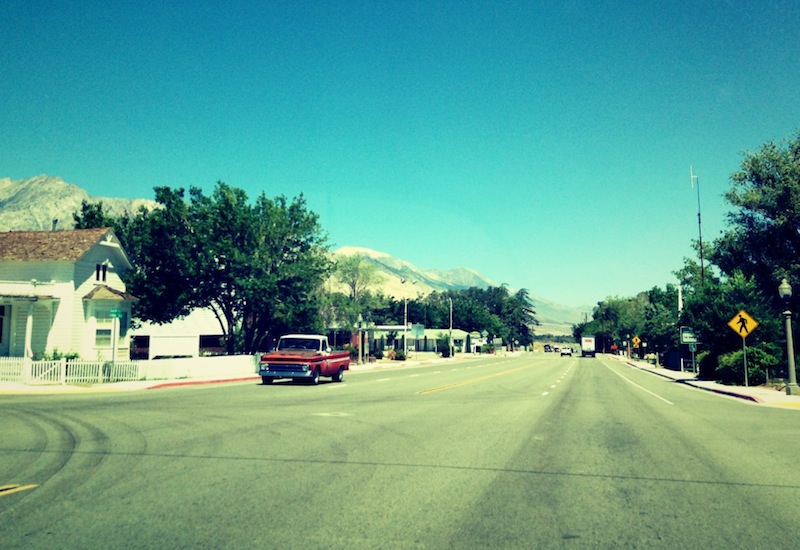 As we drove further into California, we came across a new landscape: extensive green fields, displaying neat rows of strawberries, blueberries, cherries, oranges, peaches and other vividly colored fruit. As pickup trucks idled, waiting for the dark hands which would fill their wooden crates, workers labored under a roasting sun. Few could be seen standing – they were mostly hunched or squatting, picking round shapes from their stems. I wonder if this is how they dreamed of California. 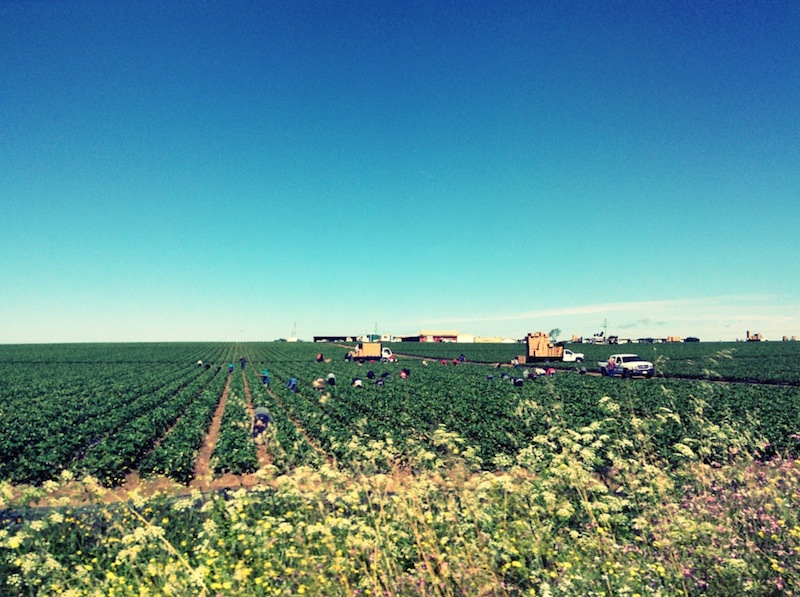 From valleys to mountain ranges, from the desert to the sea – ice and sand, gravel and wood. The American West is a place of shapeshifting beauty. Below are some favorites: 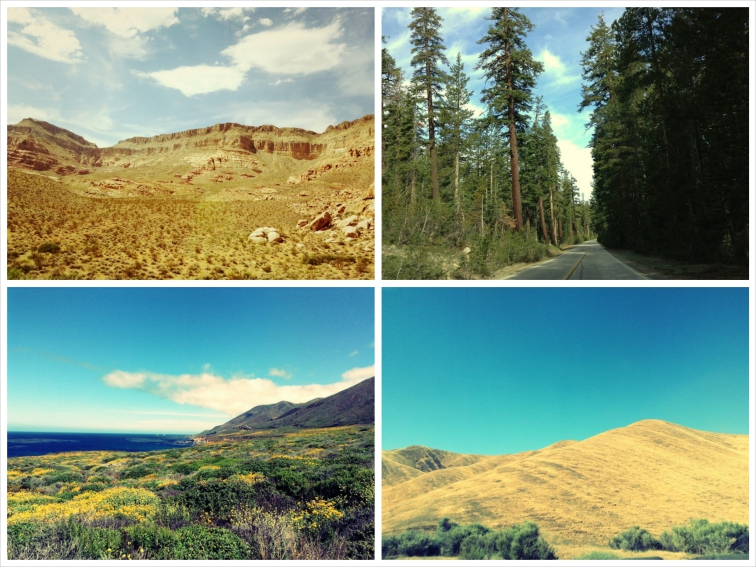 After discovering the “USB Chamber of iPod Wonders”, we could finally listen to something other than Christian rock. Since we had no predefined road trip mixes to use, our soundtrack was either left to the care of the Shuffle Gods or selected by current mood. At times, we managed to suit the music to the landscape, leaving the memory of a place permanently linked to a specific set of songs. Hence, leaving Las Vegas at dawn is now associated with The National’s “Trouble Will Find Me”, whereas any cityscape at dusk reminds us of the Chromatics’ “Kill for Love”; we found Phosphorecent’s elegiac “Muchacho” to be remarkably suited to driving through breathtaking natural wonders, sometimes accompanied by The Walkmen’s “Heaven”; Rodriguez and Buffalo Springfield followed us in and around San Francisco, later joined by Father John Misty’s “Fear Fun” and Junip’s homonymous album as we got closer to Los Angeles. Zooming by dewy forests and mountains, we also had a listen to Bruce Springsteen’s “State Trooper”, but I quickly became paranoid and had to skip ahead…

As we drove and drove, and drove again through scarred depths and vertiginous heights, Elle had the occasion to get a few dust and mosquito-smeared shots of our passing world (dashboard reflections and all…). Hence, find below yet another whimsical chapter in our ongoing series “Amazing Tales of Cinematographic Ineptitude”. Note the images have been speeded up; I was not driving that fast (most of the time).

Even with the skills of a master director/editor, the actual voyage cannot be grasped in any constructed recreation. Ideally, this would be a trip to be emulated, which we highly recommend to any of those with wanderlust pulsing through their veins.