Notes from a Hospital in Guatemala

It starts again. At first a soft rumble spreading through muscle, gathering speed and strength. Then begin the jolts. A finger twitches, an arm spasms. There is still some control though. A fist closes, teeth grit, mouth clenches. But it won’t stop, no. It grows, electric, burning entire swaths of tissue until the whole body is lifted, fully charged.

I’m back in the hospital trying to hold sway over a body I don’t recognize anymore. Or, maybe it’s the other way around – it doesn’t recognize me. This mass, these filaments I thought I knew (we were close, man…), all acting unrestrained, bailing out on years of intimacy just for kicks. Couldn’t we have talked about this? How did we get here, to this stretcher washed in antiseptic? When did we start drifting apart? I took care of you – no, not always, excess looms in the night – but we were together, battling it out. Us vs the world. More than anything else, there was trust. Now I am lost.

The body is rapt in convulsions. The white fabric covering the metal stretcher creases as arms and legs go flailing, upwards they go, until crashing they come, clank clank clank. More doctors, nurses hurrying with plastic bottles and remembering (him again?), several sweaty palms holding wrists and ankles down, a quick dash to open a vein, until electrolytes finally flow, cold as bone, and he shakes and he shakes and he shakes – still he shakes.

They were all middle-aged, dressed in white and bright blue – a female contingent working double shifts while the world outside resigned itself to predictable sunrises and sunsets. We shared stories. Theirs had a recurring theme: the presence of children and the absence of fathers.

First one, then the other, followed by more, not really evading a sick man’s hazy queries but circumspect about the details nonetheless. What happened?, still the prostrated man nudged, leading an inquiry tinged with meekness. Life and other complications, they answered, before turning to more practical matters: another needle, a new bottle hanging on metal wires, more serum dripping, a shinier pill. One kid, sometimes three, sheltered between mothers and grandmothers. Also, night school: a fresh degree, more nursing experience, the chance of better pay and the dream of a promotion. A very slow climb, testosterone-free.

One evening, as another shift ended, a final push for the truth and a quick, exasperated conclusion:

All the doors of the hospital corridor remain closed. We stroll through dimness once in a while, to get the blood flowing and to shield legs from atrophy. Nurses walk past us, smiling at the odd couple. Once the geriatric tour is done, we return to our room and shut the door behind us.

Evenings are busier than mornings. The corridor gets crowded and the walls become scarred by flashes of ambulances stationed by the entrance. Wheelchairs, bloody faces, children wailing, they all come in. Emergencies are dealt with while friends and relatives wait in the gloomy corridor, talking quietly or concentrating on the glimmer of cellphone screens. Every day the faces change.

One evening, completing the final lap of our slow tethered walk, we notice an open door facing our room. Inside, an old couple sits by the bed, not touching, their hollow-cheeked features washed by light coruscating from a muted television set – but their eyes are not looking at lilac-hued images flashing, nor are they measuring our own awkward embrace as we try to tackle a door handle while dragging a metal pole, like a clumsy Moses and Zipporah. Instead, they are looking at the wooded rectangle framing their barren grotto, engrossed in a vision of a static portal promising hearty arrivals and mended departures. Nobody sits for them in the corridor.

We eventually manage to push ourselves into our room. For a few seconds, both our doors remain ajar. Theirs stays open.

Amidst the widespread smell of iodoform, the disturbing moans coming from the corridors, the sharp glow of LED light bulbs, the feel of steel, the gush of antibiotics into the bloodstream and the uncertainty of what tomorrow will bring, there is a strange comfort emanating from the ubiquitousness of small screens flickering with the familiar images of Friends reruns.

If anyone asks, we hope we’re doing fine.

A siren wails and plastic wheels shoot through ceramic tiles. The clock on the wall ticks with increased urgency. Her bulging belly is carried into a room where lamps are already blazing. Doctors are brought forth, hands raised. Surgical instruments clatter in argent trays. She grips the side rails of her cot – panting, drenched. It begins.

Later, the shuffling of feet, accompanied by a soft knock on every door along the crepuscular corridor. One by one, a derelict collection of hospital gowns stands silent between open doors, holding their breath. The hushed crowd keeps walking as nurses join the procession, all following the hallowed luminescence of a tiny white casket.

Inside a room glowing like wildfire, she lies sedated, her body coerced into a chemically-induced peace, wallowed in red.

The Needle and the Damage Done

Once upon a time there was a monster with arms made of cement. Its head was covered in fur and its bones stuck out in peculiar places. As it roamed the wards of cobwebbed sanatoriums (for there was where it lived), chunks of concrete would fall off a humerus, hit a fibula and crash on a phalange, making the monster hurr and gwarr with displeasure. By the end of any day, it would go to sleep with Giacometti arms. The following morning, it would wake up bonded by mortar, lumbering once more through broken pieces of itself. 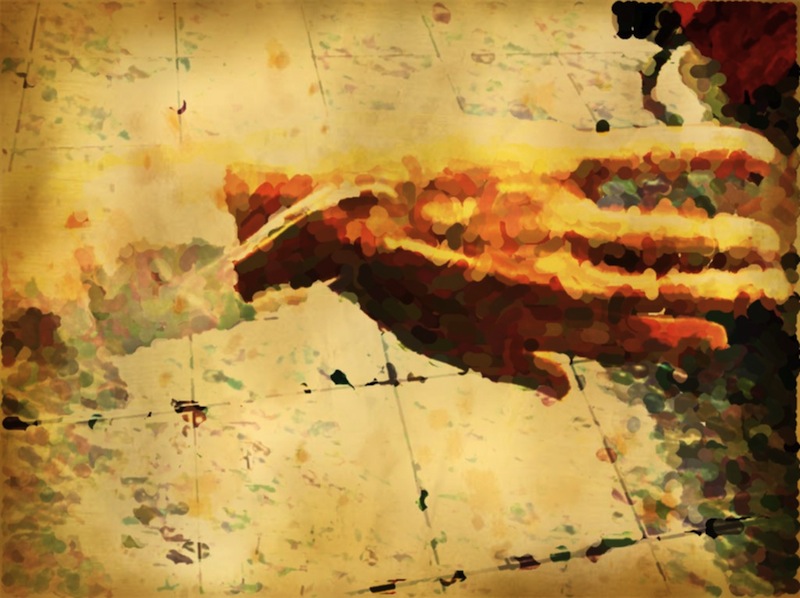 Father died in 1989. Until then, the universe was of no consequence. Quarks, dark matter, nebulae, the precariousness of Pluto, shooting stars – all insignificant, paling under the effervescent glow of a red and yellow bicycle. The planet turned on its axis, gravity held folk down, the waves and the moon did their sweetest thing. Me and my bicycle, we were dandy. The hills felt the rubber hit, one wheel at a time, tires rousing thunder as me and my bike sped like lightning, readying for another jump. The world was kept at bay, all of its distractions hidden in a silver box outside my window, tapping softly as I slept.

My dome was sheltered from the storm – the structure was sound, the foundations secure. But it did rain around us: one of the boys, friend and neighbor, got smacked by a truck on his way home, his future uncertain for a while, until he returned from a coma with glorious scars crisscrossing his skull, an emperor returning from battle, the envy of us all; a murder, matricide, and Father covering his head with trembling fingers, trying to understand the loss of a friend, then holding my arms and binding me to a secret promise; a salacious scandal next door, made public by women roaring in the street, while betrayed men cowered under the intensity of such voluptuous lungs; a son lost to the river and black curtains closing. Other tragedies, other dramas, more importantly other people – distant meteors, crossing the skies as I rode my red and yellow bicycle through gravel and moonlight.

Three months shy of my eleventh birthday I look at my red and yellow bicycle and notice rust on its pedals. I have left Mother screaming in the bedroom and am on my way out, to breathe the crispness of a sunny November morning and to receive death and the universe into my home. Before grief, before anger, even before numbness, I see rust in my pedals and feel my head crush under the weight of a blistering revelation:

I am other people.

After spending several weeks inside a room without windows and having gallons of serum/antibiotics/vitamins/assorted elixirs pushed through my veins, a letter arrived from the President and my gaolers were forced to let me go. My cell partner, a beguiling lady of considerable charm and myriad skills, was released too. The President must have had lobster for lunch – such magnanimity usually involves crustaceans.

I’m relieved to be out. The other inmates were a sordid bunch, veering on the grotesque. Eric the gardener would not stop rambling about Nymphaeaceae, whereas Eric the Half-a-Bee often waxed philosophical on some ancient injury. Plus, Vinicius’ new girlfriend kept looking at me funny. She was very pretty.

Going Gently Into the Light

My entire being feels hollow and my heart beats in solitude, like a lone tree swaying in the fairy circles of Namibia. My legs tremble under the diminishing weight of my frame, a skeleton walking on sticks. I cross the hospital corridor, hopefully for the last time, leaning on Elle’s shoulders, attempting a vigorous smile at passing nurses, doctors and security guards. Fare thee well needles and pins, saltless güisquil and pliable trays, vials of blood and daytime television, fare thee well…

I miss the volcanoes and the lopsided caress of the cobblestones under my feet. We approach the last stretch of worn-out chairs lining the somnambulant waiting room of a hospital in Guatemala, just before the light and the sounds of the streets and the smoke of the chicken buses and le temps qui reste and women in harlequin huipils and Doña Luisa Xicotencatl’s banana bread and faded yellow arches and bougainvilleas sprouting from the ruins of cathedrals and oh-