Walking by the shores of Lake Atitlán, seeing screeching kids jump into cold waters and play until they wade ashore shivering, I was reminded of the floating villages of Cambodia. It’s one of the blessings (or curses) of a traveling life, these mnemonic shifts between latitudes…

From the balmy skies of Guatemala, on the last days of 2013, my mind drifted to the dwindling days of October 2009, when we found ourselves on the final stretch of our first trip to SE Asia. The country we had chosen to visit was Cambodia, mainly due to my childhood fascination with the temples of Angkor Wat.

In what later became a pattern throughout our travels, what began as a holiday to see crumbling ruins in the jungle soon turned into a deep connection with a landscape and the people therein.

As our tongues tasted spicy amok and sunny mornings infused our brains with a distinct memory which would bring flashes of Asia whenever we stumbled upon a particular whiff (usually connected with blooming leaves and musky earth), our lips and cheeks learned the multilingual value of a smile – surrounded by strangers in a strange land, it was often returned, usually through a youthful grin we couldn’t quite pin down in terms of age.

Everybody we met throughout Cambodia looked remarkably young. The country’s recent violent history surely contributed to its fresh-faced population – when one generation is nearly wiped out, offspring is usually appointed as a priority. But the sprightly faces we met had a different type of glow, one of not only exuberance but also idealism and even innocence.

We encountered a country opening itself to the world, on the threshold of becoming a hotspot for mass tourism but still retaining and holding on to its essence.

Between the magnificent, lush temples of Angkor Wat and the treacherous waters off Sihanoukville, as we rested our bodies in Siem Reap, exhausted from climbing and sweating under a brawny sun, we paid a visit to the floating village of Kompong Phluk.

As with our discovery of the island of Koh Rong, it was mere chance that brought us to a boat idling by the gigantic Tonle Sap lake. It all happened very fast – a rushed proposition, impulsively agreed upon -, which explains in part why I have no recollection of hardly any details.

I recall an email being sent late in the afternoon and a departure by taxi towards the Tonle Sap the following morning. We joined a middle-aged couple (Australian?) on a small boat, which would lead us through the floating village of Chong Kneas and eventually drop us off at Kompong Phluk, further south.

Chong Kneas resembled a bigger-scale version of the floating villages we later saw hidden between the karst peaks of Ha Long Bay, Vietnam. Through Chong Kneas we were then introduced to the natural wonder that is the Tonle Sap, known as the largest freshwater lake in SE Asia. 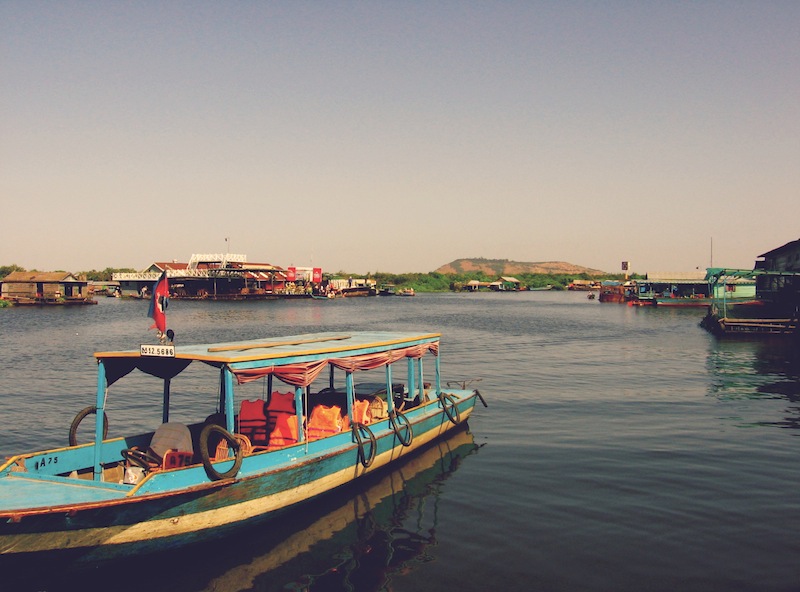 One of the many bewildering aspects of the Tonle Sap is its swelling and waning according to the seasons. During the dry season (November-May) it has a surface of 2,700 km2, expanding to a staggering 16,000 km2 during the wet season (June-October). As a result, the communities living off the lake’s bounty have adapted to its seasonal routine by erecting houses on top of tall wooden stilts.

Although Chong Kneas provided an introduction to the way of life along the Tonle Sap, it was only when we changed to a smaller boat paddled by a friendly local lady that we began to grasp the utterly unfamiliar landscape we were entering. 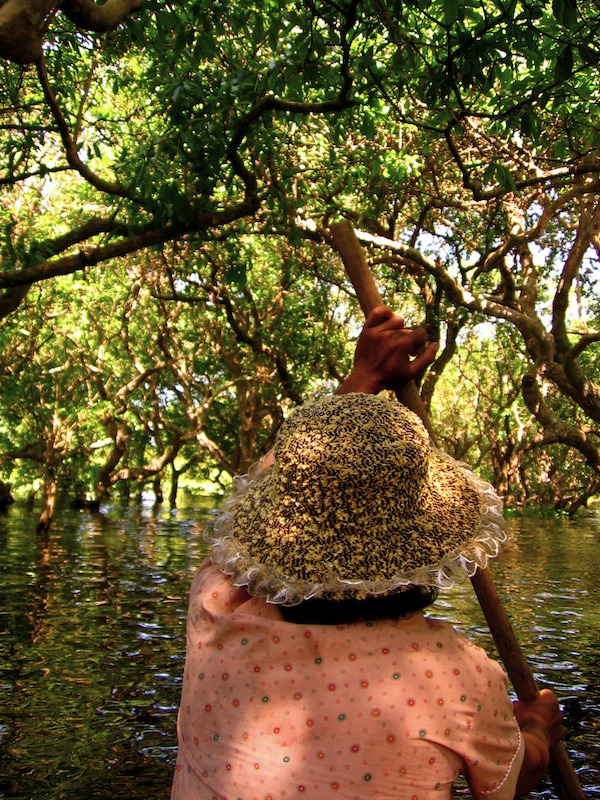 As we floated through a drowned forest, our hands touching green canopies, we could hear the screams of monkeys in the distance. Once the wet branches opened up, we got our first glimpse of the thin stilts making human presence possible in such an unusual environment. 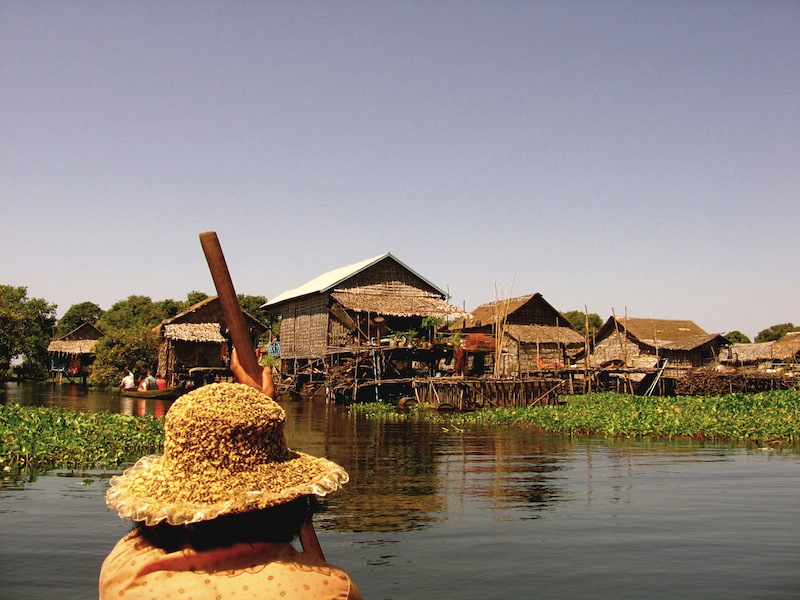 Our tour of Kompong Phluk mainly involved visiting brightly colored temples, whose reflections made us feel like being trapped inside a watercolor, and chatting with local kids on a break from school, who displayed an eagerness to practice English and a curiosity towards us that had us beaming from ear to ear. 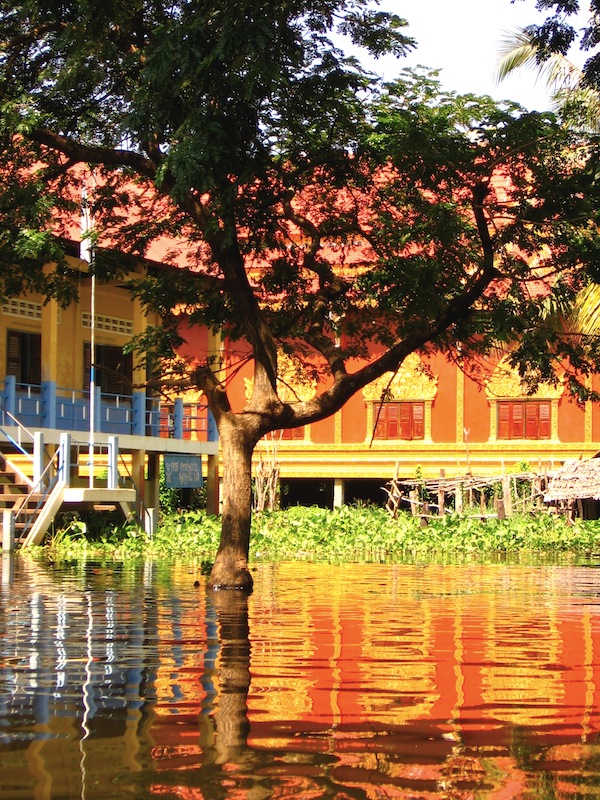 We eventually moved to a large boat, where we had lunch, and finally back to a taxi headed to Siem Reap. I have no idea how much our half-day of exploring cost us. I am also unable to ascertain what we had for lunch.

What I do remember, vividly, and besides the liquid shimmer under the canopies or the gentle sound of a paddle stroking water, are the kids of the Tonle Sap. 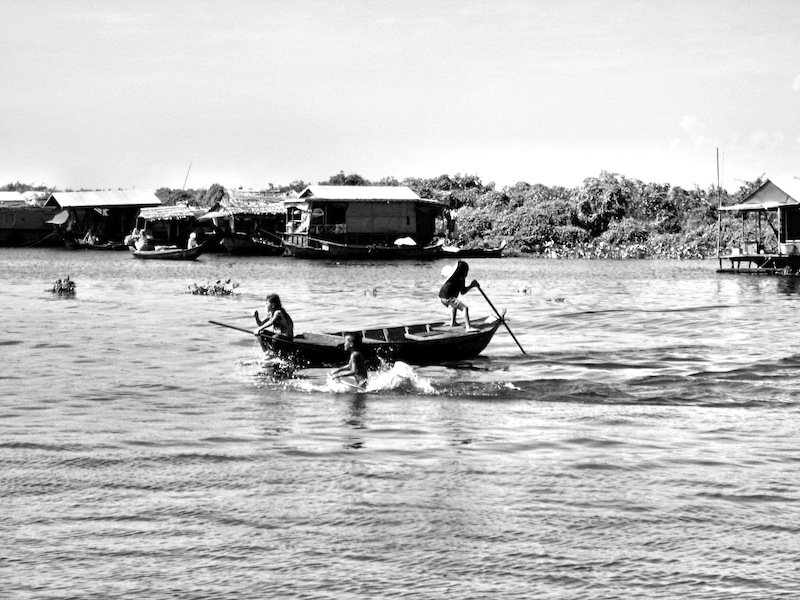 They kept watch as our boat sped into the floating village, reserved at first but later flashing a happy grin through successive games of peekaboo and soft touches of our more ruffled hair. 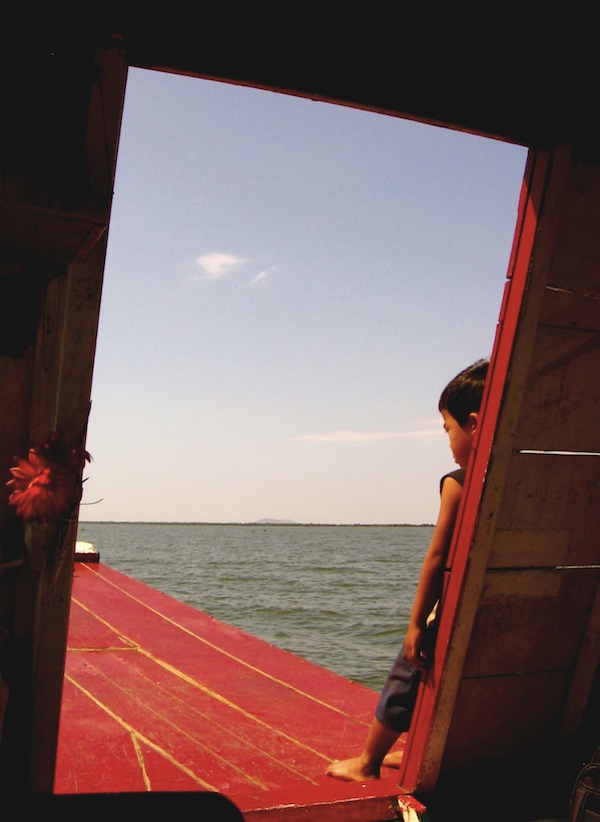 They jumped across the water from a speeding boat unto ours, selling bananas, and jumped back out into the open lake, waving with their fathers as we drifted apart. 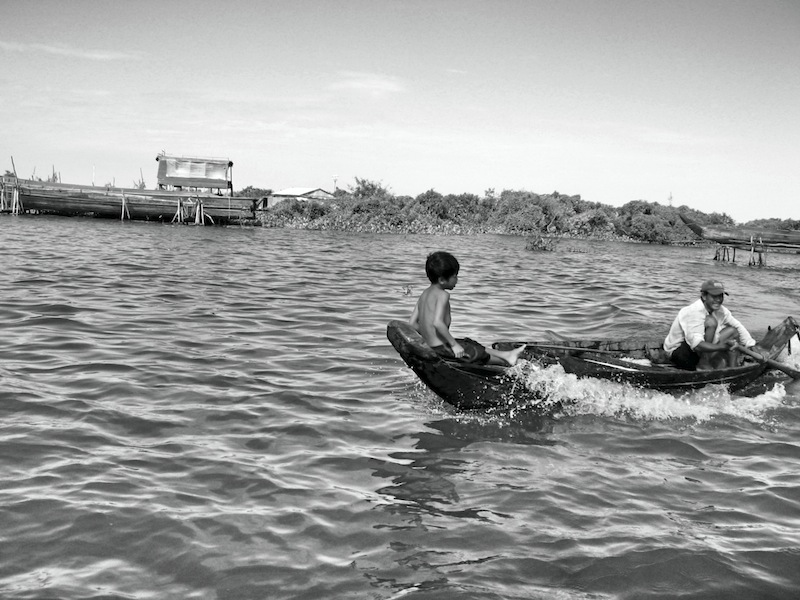 They had snakes draped around their torsos and used large metal pots as vessels to brave the dangerous and playful waters of the Tonle Sap. 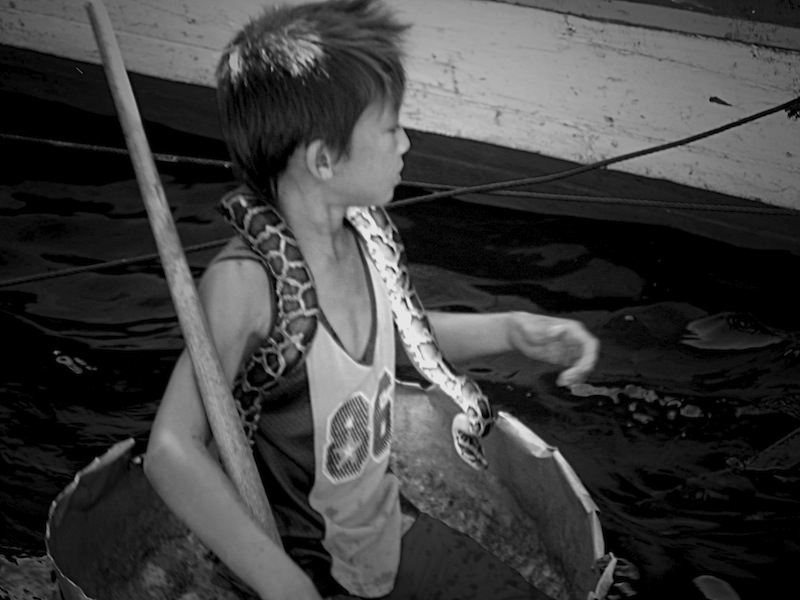 They were markedly young but old beyond their years, poor yet resourceful. 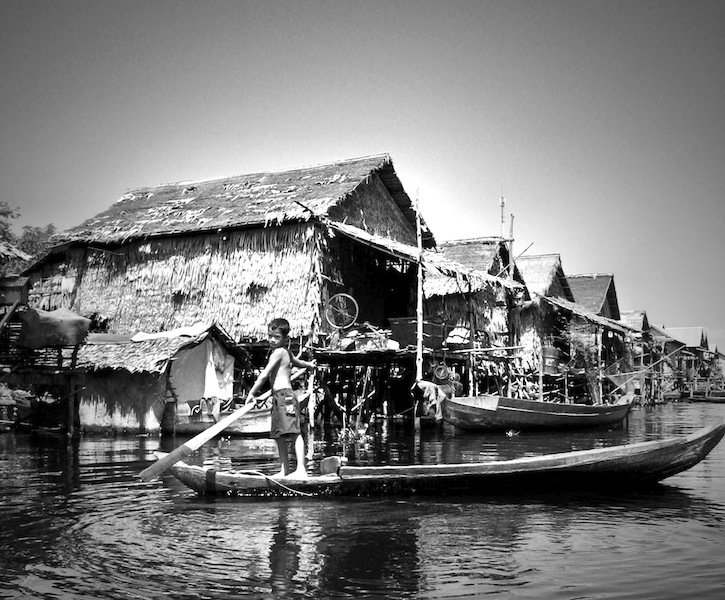 Mostly, they smiled, waved and jumped into the warm waters as we slowly passed through their houses. Occasionally, the blaring of a television set would mingle with their shrieks of joy. 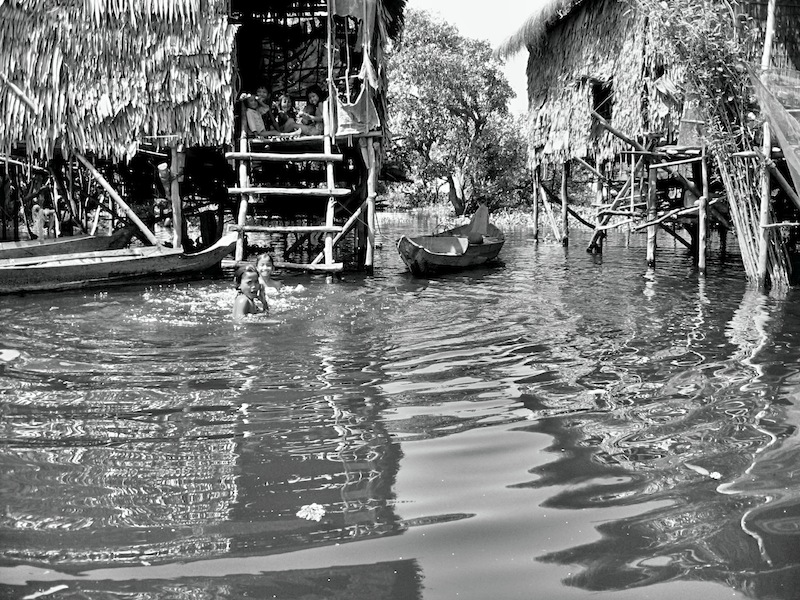 The entire sprawling village was nearly deserted of tourists. Families gathered to greet us, expecting nothing in return but an open smile, which we gave out like we were the richest people on Earth.

From what we read these days about the floating villages of the Tonle Sap, they seem to have become targets for tourist scams and overpriced tours – particularly Chong Kneas, with its 60$ bags of rice, to be “distributed” to the village’s orphans.

There are always those of us who have no qualms about taking advantage of other people’s misfortune. That they have sprouted in such a delicate territory does not surprise us, poverty usually providing fertile grounds for corruption and unscrupulous profiteering. Nonetheless, the communities making their lives in the Tonle Sap deserve a better government, one who is strong enough and willing enough to tackle a situation which may further deteriorate a traditional livelihood already dependent on nature’s whims. 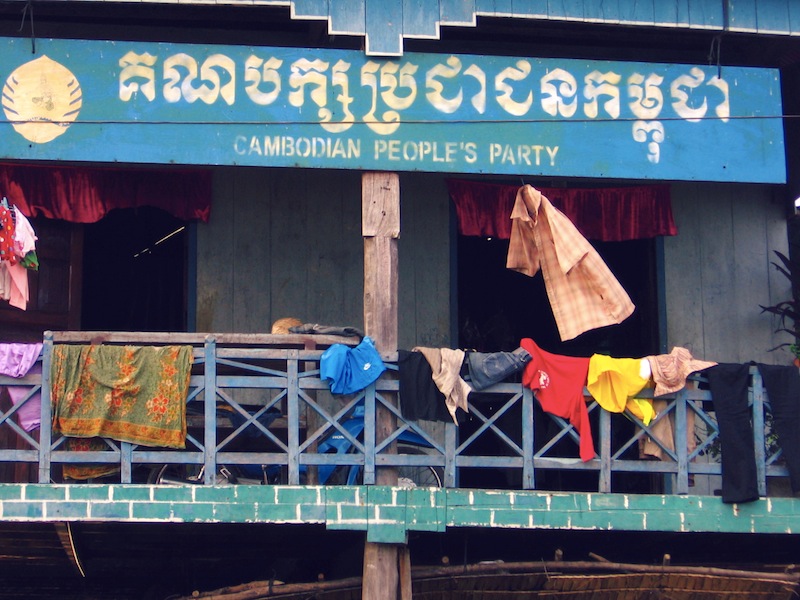 We would like to one day return to Cambodia, to see how much it has changed and to breathe its effervescence once again. We hope its future is brighter than its not-so-distant past, and its politicians and financial elites are able to help lift its population from rampant poverty.

We also hope its children still have reasons to smile at strangers from distant lands.