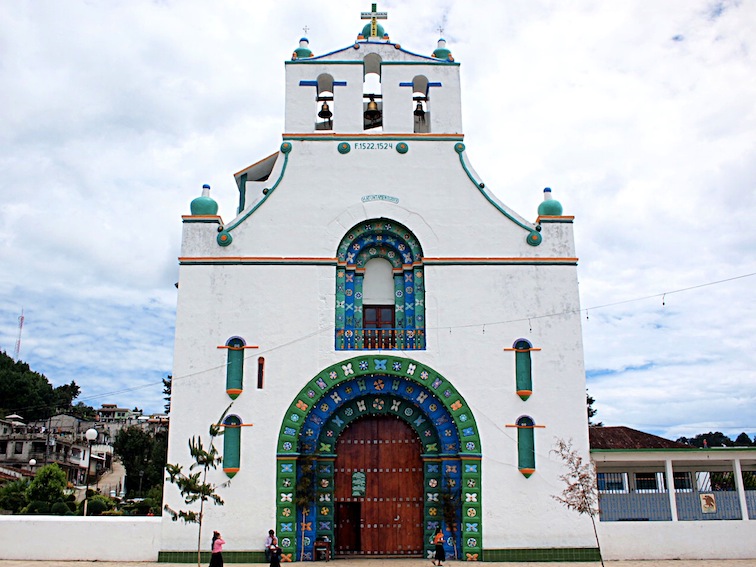 The small town of San Juan Chamula is situated 10 km northeast of San Cristóbal de las Casas, in the Mexican state of Chiapas. Like many other scattered highland towns surrounding San Cristóbal, it is inhabited by fiercely independent indigenous people – in this case, the Tzotzil Maya.

As we had already noticed during our morning shopping sprees through the local market in San Cristóbal, the natives of San Juan Chamula are easily recognizable by their traditional dress. The women wear colorfully patterned blouses named huipils and long skirts made of rough black wool, whereas the men wear tunics made of black or white wool called chujes. 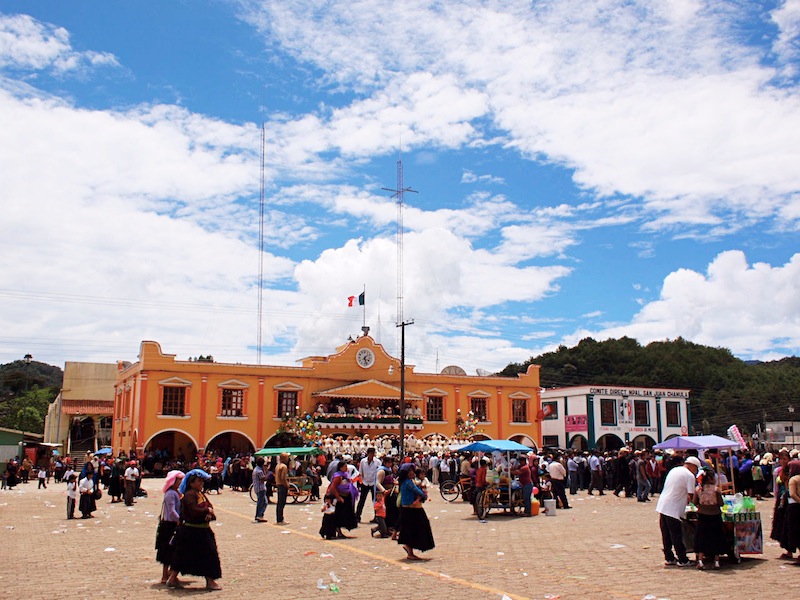 Apart from traditional garbs, what distinguishes San Juan Chamula from many of the neighboring villages is their unique autonomous status within Mexico: the federal government has no authority whatsoever, which explains the conspicuous absence of uniformed police, otherwise ubiquitous throughout Mexico.

Nonetheless, in spite of all the fascinating particularities of San Juan Chamula, there is one item which is responsible for most if not all of the town’s tourist visits: the Cathedral of San Juan Bautista. Not unlike the town itself, the church is at first glance unremarkable. It’s only when going beyond its wooden gate that the true singularity of San Juan Chamula becomes vividly apparent.

The first thing to know is that it is strictly forbidden to take photos inside the Cathedral of San Juan Bautista. Penalties can range between having your photos deleted to going straight to jail or being expelled from town. Again, bear in mind the autonomous status of San Juan Chamula, meaning they have their own police – the “federales” won’t come to the rescue, so think hard if a photograph is worth all the trouble.

Also, due to long-held beliefs involving mirrors and stolen souls, the natives don’t take kindly to having their photo taken. The basic rule is: ask first and take photos later. It may be easy to get away with it, particularly with zoom and other technological cheats, but I’d advise to tread with caution. This is particularly true when involving children: women may cover their kids and themselves if they see a camera nearby.

As for the church itself, it’s unlike anything we’ve ever seen. Named after St. John the Baptist and built by Dominicans, it became a center of worship around the 16th century. At least, that’s what the Dominicans expected – the reality was a bit more daunting.

The Mayans were not easily converted, which eventually forced the Dominicans to pull out the old trick of adapting native customs and beliefs to their new religion. At this point, the indigenous people realized it was easier to fight oppression by pretending to follow the rules. This state of affairs eventually led to the bewildering mix of Catholic and Mayan religious elements we can see today. 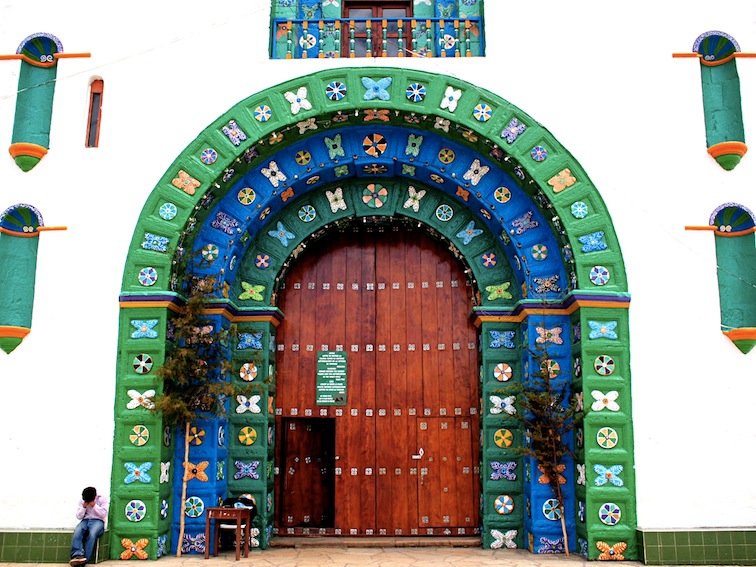 Inside the Cathedral of San Juan Bautista, an intense smell of Copal resin incense permeates the atmosphere, as the visitor is greeted by a plethora of saints locked inside wooden boxes on each side of the main room. These saints, although familiarly resembling Christian iconography, actually represent Mayan deities, and are unnerving for a number of reasons.

First, some of them look like vampires – their skin is bleached white and their lips fiery red, an unsettling combination when surrounded by dark-skinned natives. Saint Sebastian looked particularly bloodthirsty…

Second, most of them are holding mirrors. Although one explanation is the typical “warding off evil”, we heard another one which was more complex and also ringed truer. In Mayan culture, mirrors are believed to be gateways into the supernatural world. As depicted in many ancient stories, the tricky bit with portals is getting back alive, or at least without missing essential pieces, such as a favorite finger or a soul. In this particular case, it is believed a person’s soul will soar out of the body while in prayer. However, since the saints are wielding mirrors, the soul will be reflected back into the body of the devoted.

Third, a few of the statues have had their hands cut off (they’re on the left side when entering), and nobody seems to pay them much attention. The reason for this lies in a field nearby, where the old ruins of the church of Saint Sebastian still linger after nearly a century of decay.

When the church of San Sebastian was destroyed, the statues which could be salvaged were moved to the Cathedral of San Juan Bautista. There was a catch though: the townsfolk did not appreciate saints who were unable to prevent the destruction of their church, so they were punished by being placed facing the wall with no robes. Furthermore, their hands were chopped off, since they had proved idle in the face of tragedy. Recently, these incompetent saints were somewhat restored to their former position, but they are still considered unreliable and weak, and therefore unworthy of worship.

Going past the saints, crunching pine needles and listening to chants in the native Tzotzil language, we are greeted by the main statue, looming over what once was an altar. The statue is not of Jesus, as is usual in Catholic churches, but of St. John the Baptist, the true master of the place. Looking up to the ceiling, rough drawings of Jesus and the Virgin Mary are placed next to jaguars, lions and other venerated animals.

The curanderos use various tools to summon the spirits and heal the afflicted: feathers, chants, eggs, Copal smoke, various beverages and, if the going gets rough, live chickens.

The use of fizzy drinks such as Coca-Cola has a simple reason: Mayans believe burping releases evil spirits trapped inside the carnal body. Hence, it is common to see a curandero holding a Coke or a beer in the middle of a ceremony.

Another belief posits a state of drunkenness as essential to communicate with the world beyond this mortal coil. To that effect, the preferred method is Pox, a traditional beverage made from sugarcane and packing a 38 percent alcoholic punch. We tried it when we did our lovely coffee tour and thought it not only strong but smooth – a dangerous combination.

For serious cases, a live chicken is brought in and sacrificed. There is no dramatic spilling of blood though – their necks are twisted and broken, and once the ceremony is complete the chicken is cooked by the family requesting the sacrifice.

Throughout the whole experience, myriad multicolored candles burn brightly, their flicker lining almost every corner of the church and further enhancing the mesmerizing uniqueness of the Cathedral of San Juan Bautista, a place where religion and rebellion coalesce into an extraordinary tapestry of culture. 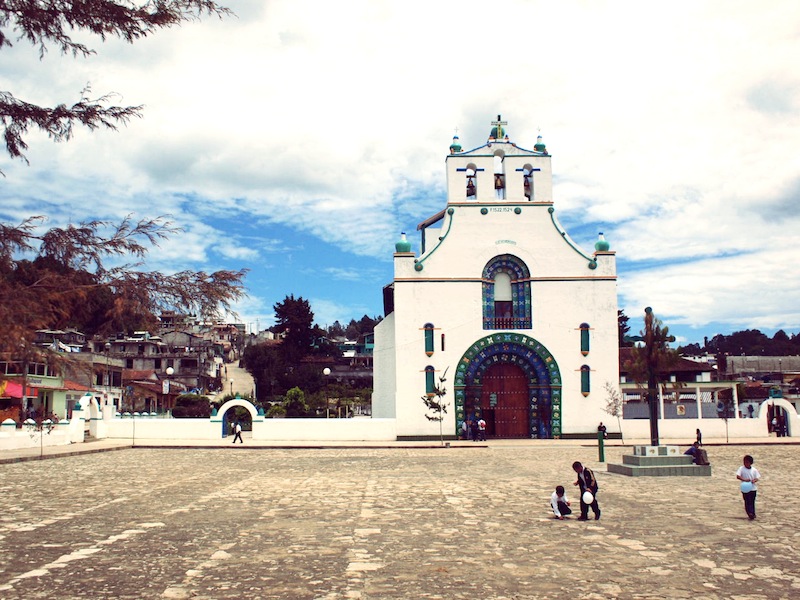 There are tours leaving the square in front of the cathedral of San Cristóbal de las Casas every day at 9:30 am. Plenty of other tours are available along Real de Guadalupe. If willing to go solo, taxis can be hailed anywhere in San Cristóbal (35 MXN/2 EUR pp one way), whereas “colectivos” leave from the main market (12 MXN/0.7 EUR pp one way) throughout the day.

If wanting to save some pesos and travel solo, it is advisable to at least do some research beforehand. The culture of San Juan Chamula has many fascinating aspects, and we’ve only scratched the surface here (for instance, the green and blue crosses around town may look like Christian crosses, but they’re not).

Entry to the Cathedral of San Juan Bautista is 20 MXN/1.2 EUR pp, paid at the entrance. IMPORTANT: No hats or photos allowed inside.

Sunday is probably the best day to visit, since it’s market day and the whole town is selling their wares around the main square in front of the church.

There are plenty of crafts stalls displaying handwoven clothing and various textiles. They are usually cheap, beautiful and of high quality.

Although the population has become somewhat accustomed to the presence of tourists, they are still predominantly weary of outsiders. Remember, these people have fought off conquistadors, Christian missionaries and the Federal Government. Be respectful and do not mess with them.