After nearly 5 months in Mexico, we finally made our way south to Guatemala. The beautiful streets of San Cristóbal de las Casas were left behind, together with a piece of our hearts and an immense gratitude to a country which unexpectedly became one of our favorite places in the world.

To enter Guatemala, we would be crossing the overland border between Ciudad Cuauhtemoc on the Mexican side and the town of La Mesilla on the Guatemalan side. Passports in our pockets, we hit the road towards the Guatemalan highlands…

There are many transport options available from San Cristóbal to Guatemala, but the two below are the most popular for penny-pinchers such as ourselves:

OCC buses: depart at 7am and cost 100 MXN/6 EUR for a 3:20-hour drive to Ciudad Cuauhtemoc. Once arrived and gone through Immigration, hail a taxi (colectivo 10 MXN/0.6 EUR or private 30 MXN/1.7 EUR) for the remaining 4 km officially separating Mexico from Guatemala. Safely in La Mesilla, walk to the bus station and get a chicken bus to whatever location desired.

Shuttle bus: since our last destination would be Panajachel, which is 400 km from San Cristóbal and 222 km from the border at La Mesilla, we ended up using a shuttle bus. We booked our trip through Tierra Maya, one of the many travel agencies lining Real de Guadelupe street in San Cristóbal. The shuttle does a hotel pick up (in our case, room pick up) between 6:30 and and 7am and costs 300 MXN/17 EUR pp for an (hypothetical) 9-hour drive between San Cristóbal and Panajachel. 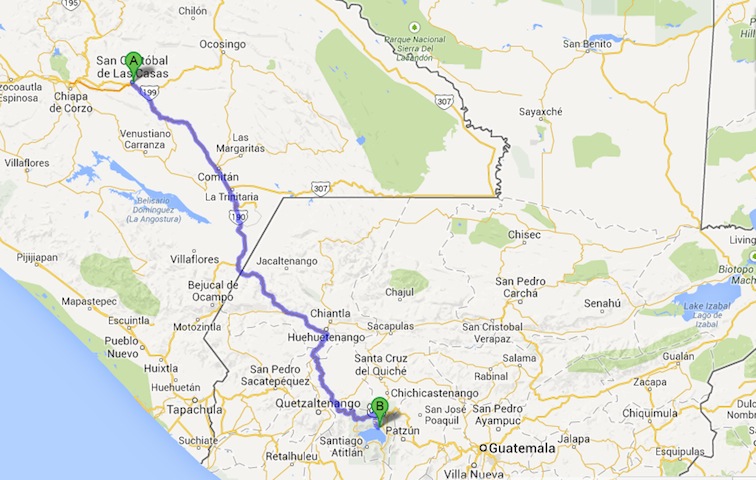 We left San Cristóbal de las Casas at 7am, as advertised, together with a small group of fellow travelers: a Japanese girl, a Guatemalan lady, a Swiss gentleman and an Australian jackass doing a “passport run” to Guatemala. This particular backpacking specimen started bragging he would be leaving Guatemala in the early morning of the following day and would later tell everyone he had stayed for a month.

He was telling this to the driver in very broken Spanish, and I noticed the latter becoming increasingly nervous, scrutinizing the Australian whenever he could take his eyes off the road. Later, I was able to take the driver aside and talk for a while in private. He finally confided he thought the Australian was a drug smuggler and thought we might get in trouble. I then explained he was just an idiot trying to impress future girlfriends. Since this is a common theme across all cultures, the driver was left more reassured and even warmed to the Australian’s attempts at engaging in conversation.

We stopped for breakfast 2 hours into the trip, halfway to the Mexican city of Comitán. Alas, when we resumed our journey, the tensions arising from the current political situation in Mexico finally caught up with us…

For the entire duration of our stay in Mexico, we heard tales of roadblocks being erected in popular routes across the country, related to the ongoing teachers’ strike. These apparently random roadblocks were responsible for many sudden travel issues, from canceled tours to the ruins of Palenque to canceled ADO buses to Cancún.

We were thinking we had escaped the curse of the angry chalkboard, but were proven wrong by a long queue of cars forming ahead of us. Luckily, the demonstrators were willing to lift the roadblock for a fee, so in the end we only ended up losing 30 minutes and 20 MXN/1 EUR.

We arrived in Ciudad Cuauhtemoc around midday, where after dealing with Immigration we continued to a parking lot 100 meters away from the border. Here, we grabbed our bags and walked to the Guatemalan Immigration office, to have our passports stamped and change driver and vehicle. All in all, a fairly straightforward operation with no evidence of serious issues, which probably makes this the best border crossing between Mexico and Guatemala.

Our new driver then took us all the way to Panajachel, through lush mountains, steep valleys and serpentine waterfalls. The scenery is quite dramatic, and so are the roads: the effects of floods were visible everywhere, from missing chunks of asphalt to massive rocks dangerously sprouting in the middle of the road.

Close to Panajachel we stopped to drop off two people who were continuing to Antigua. We eventually arrived at our hotel around 18:00, making it a total of 11 hours on the road. We were exhausted but safely delivered, so no complaints there…

Information concerning Immigration from Mexico to Guatemala by land is conflicting, or at least confusing. We checked several websites online, but never got to a definite conclusion. The main issue is the supposed payment of an exit fee of 295 MXN/17 EUR for foreign tourists.

If arriving in Mexico by land, the common agreement seems to be that this amount is certainly due, and should be payed before leaving Mexico.

If arriving by plane, things get complicated. According to some info, this amount is already billed into the plane ticket to Mexico, so should not be payed at the border. Other sites posit this is no longer true and the amount should be payed in full. Since we no longer had our plane tickets with us and no proof of any payment, we decided to make a smooth exit from Mexico and payed our 295MXN/17 EUR pp.

Nonetheless, we preferred not to deal with sketchy border agents and therefore paid our exit fee at a bank in San Cristóbal. Equipped with our FMM form (the one that every tourist must fill when entering Mexico, half of which is to be delivered upon departure) and our receipts, we got our passports stamped at the Mexican border in a couple of minutes without any problems. Adiós, Mexico! 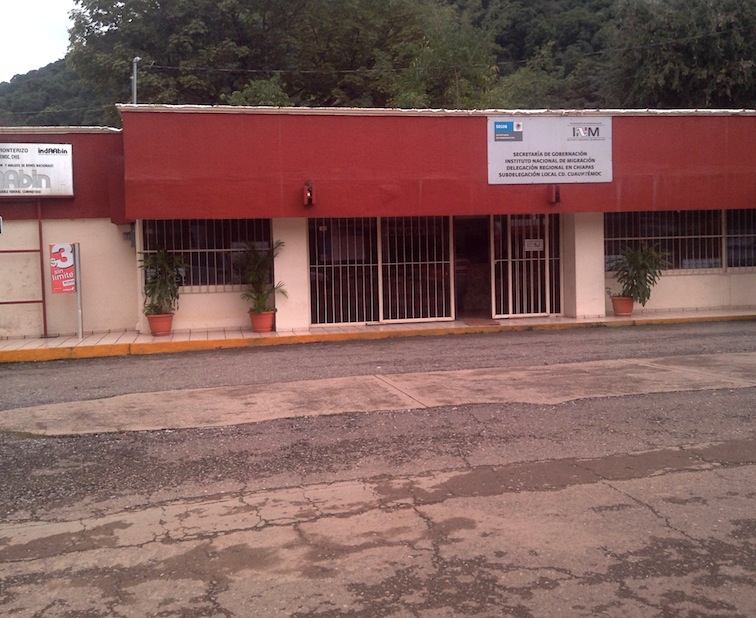 At the Guatemalan border, a more hectic atmosphere awaited us. There were plenty of tourists waiting around, money changers going back and forth looking for clients, buses and vans honking their strident horns, and the Immigration office swarming with people trying to leave or enter Guatemala, all squeezed into a tiny corridor.

We had heard reports of immigration officials demanding an entry fee into Guatemala. We also knew this to be illegal, and were curious to see if anyone would ask for a few Quetzals (GTQ) in exchange for a passport stamp. This time, we were pleasantly surprised – we made our way to the immigration office, gave them our passports and 5 minutes later were on our way, with no money ever being discussed. Welcome to Guatemala! 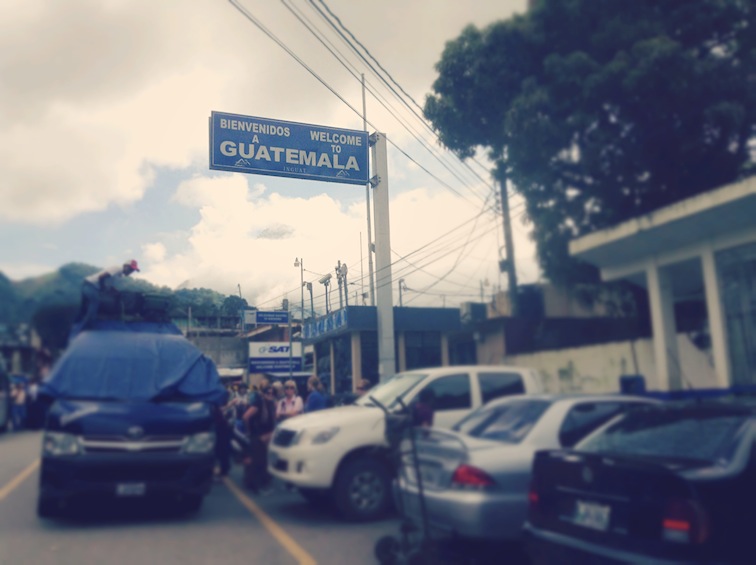 As mentioned earlier, there are plenty of money changers at the Guatemalan border, flashing large wads of Quetzals (GTQ) while pacing restlessly between tourists. Their rates vary between bad to reasonable, so it’s best to make a decision only after consulting with a few of them.

The best rates are usually found at an ATM, but since they are lacking in La Mesilla it’s preferable to either deal with a money changer or get GTQs beforehand. As an experiment, we changed 200 MXN in San Cristóbal, Mexico and Panajachel, Guatemala.

One of our favorite travel tools is a little app called XE Currency, which easily converts between whatever currencies we choose. According to XE, 200 MXN should have given us 121 GTQ, which was what we received at a currency exchange office in Real de Guadalupe street in San Cristóbal. They charged no commission, so we left happy with the deal.

In Panajachel, when offered the same 200MXN, a currency exchange office gave us only 100 GTQ – a loss of 21 GTQ, or 2 EUR. Not much, but enough for an ice-cream. Not a good deal then…

As overland border crossings go, this one was a breeze. Although possible to cross the border from Mexico into Guatemala while hopping between buses, taxis and colectivos, it takes longer to get there and is not much cheaper than a shuttle bus. Immigration is always a hassle, but notwithstanding our uncertainty over the need to pay the 295 MXN exit fee, the whole procedure was relatively quick and painless. Again, this seems to be the best border crossing between Mexico and Guatemala.

Ultimately, we arrived in one piece and enjoyed watching the landscape change in the distance. It was a full day of travel, but more than worthwhile for the privilege of gazing at the towering volcanoes surrounding Lake Atitlán, our first stop in Guatemala.