Iceland sits just outside the Arctic Circle. When we stepped out of Keflavík Airport on a freezing October morning, we wondered if “outside” was some sort of geographical joke. Once the airport’s sliding doors opened, we were hit by a freezing wind of such strength we promptly retreated back inside for a hot tea and a shivering discussion on thermal insulation (or lack thereof).

It’s the 30th of September and the sun shines immaculate as we dry a tear in Indianapolis. The mood is celebratory though – good friends have tied the knot, booze flows freely, sleeves are rolled up, feet skid between green grass and pavement. Indian Summer if there ever was one. The following day we are back in New York, preparing for Iceland. 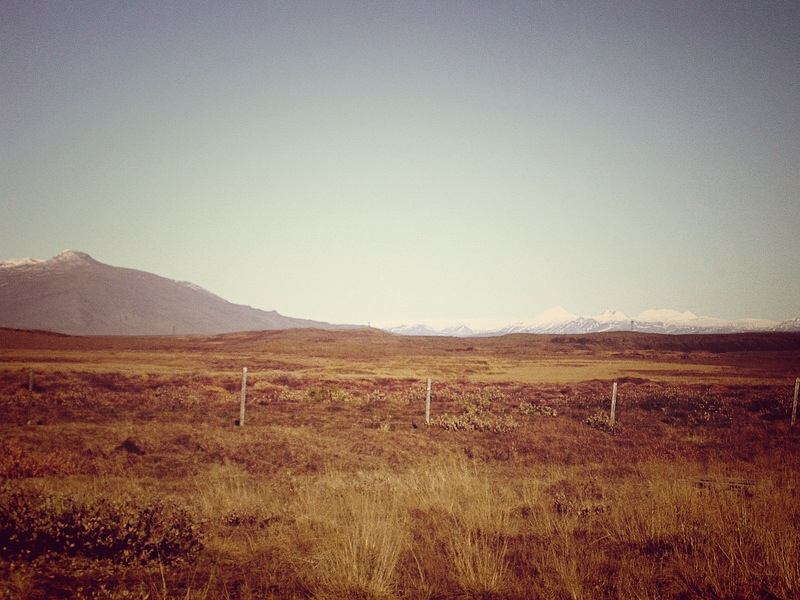 Reykjavík, the world’s northernmost capital. The trip from Keflavík was done by jittery bus, slowing down whenever the wind blew harder. We crossed lava fields, their blackness reminiscent of volcanic Lanzarote, and gazed bewildered at the remarkably low clouds. A small ladder might be enough to touch them, we thought. The sky was overcast, threatening either rain or the end of the world. In the city center, we pushed against the wind and managed to find our apartment without getting blown away to the Atlantic Ocean.

We were visiting friends in Reykjavík, so our usually hectic sightseeing schedule was somewhat tamed to ensure we would spend time with them and their first child, which we hadn’t had the pleasure to meet yet. The plan was to hang out first and check out the many wonders of Iceland second. Hence, our first evening was a more emotional affair, reuniting with old friends over cold beer and warm embraces. 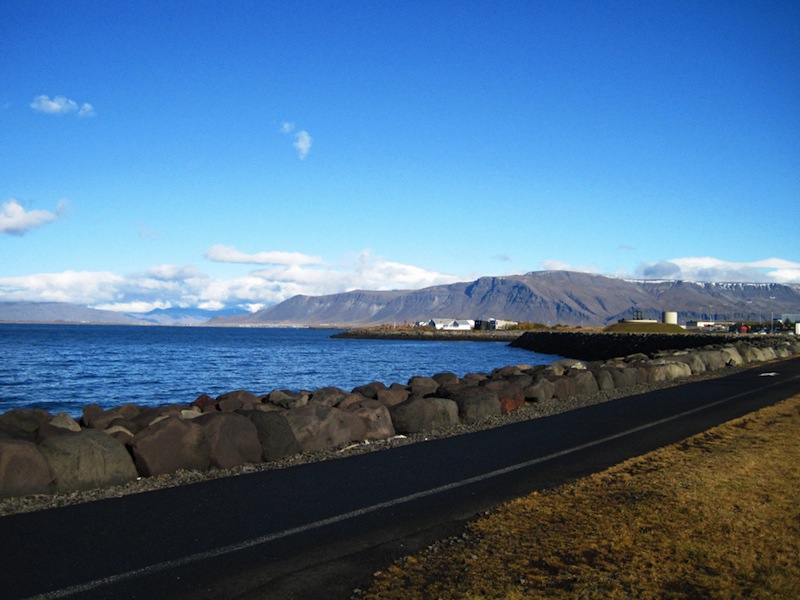 Next morning, the skies were blue and the air was warm. The wind had died down to a whisper, and the morning presented itself most pleasant. We were taken by surprise at this sudden change in weather, but not for long: we rushed outside to enjoy the Icelandic Indian Summer, this time perhaps even overdressed.

Our first full day in Reykjavík was, like the previous evening, spent in the company of friends. And what better way to languidly see the main sights than through the moderating effect of a baby stroller? In true Icelandic fashion, our first stop was the swimming pool. Laugardalslaug has big pools, little pools, slides and amazingly relaxing hot pots, where we roasted in high temperatures until our skin was about to fall off. Although not nearly as renowned as the Blue Lagoon, Laugardalslaug offers a more authentic experience, and is much cheaper. We enjoyed it almost as much as the baby did. 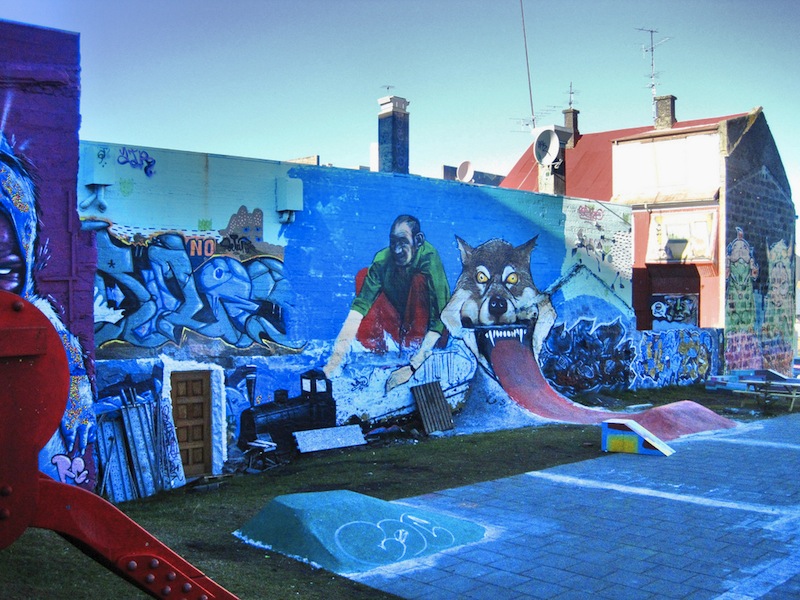 Reykjavík is quite small, and most areas can be easily covered on foot. Since it was such a splendid day, we meandered through the walkway by the shore, under mountain Esja’s imposing gaze. Passing the Sun Voyager sculpture with stomachs already rumbling, we proceeded to the harbor, where boats line up offering whale watching tours. There, in an almost hidden corner, is the small restaurant Saegreifinn, home to arguably Reykjavík’s most famous lobster soup.

Hunger momentarily satiated, we left to explore the streets and corners of Iceland’s capital. The day went by as we hopped between stores, cafes and small parks, sometimes glancing at Hallgrímskirkja as it rose past Reykjavík’s colored rooftops. As evening descended, tired bodies longed for solace. Back in our apartment rental, we weighed options for a less physical entertainment. Being a remarkably clear night, we decided to try our luck seeing the Northern Lights.

We walked to BSÍ, Reykjavík’s main bus terminal, where we booked a couple of tickets to go on a tour  in search of the elusive Aurora Borealis. The trip was quite informative and entertaining, but the sky remained pitch black throughout, with only the glimmer of distant stars providing any discernible light. Notwithstanding the perfect weather conditions (clear skies, dim moon), the lack of solar emissions meant there would be no swirling shapes above our heads. Can’t be lucky all the time, right?

We reserved one day to do the Golden Circle tour. We rented a car at Reykjavík’s Domestic Airport, and were shortly on our way to one of Iceland’s iconic attractions, the Blue Lagoon. The weather was glorious once again, which further improved our spirits. Driving in Iceland in good weather is a breeze: the roads are good, there isn’t much traffic outside main arteries and the landscape is often bewitching.

Due to its proximity to Keflavík, many visitors drop by the Blue Lagoon on their way to or from the airport. Since we preferred to soak up at our own speed, we decided to devote an entire morning to bathing in the celebrated geothermal spa. At the time of our visit, it was not as crowded as we expected. There were a lot of people around, but the area is big, and the mist rising from the blue waters gave a ghostly appearance to our surroundings.

After racing semi-naked through the cold open air, we slowly dove into the almost scalding pool, and were soon left unanchored in the dispersing mist. Yes, it’s a main tourist spot, but we loved it – putting Silica mud in our bodies, lounging about the mineral waters, rinsing mud off in the waterfall… We left floating on air. 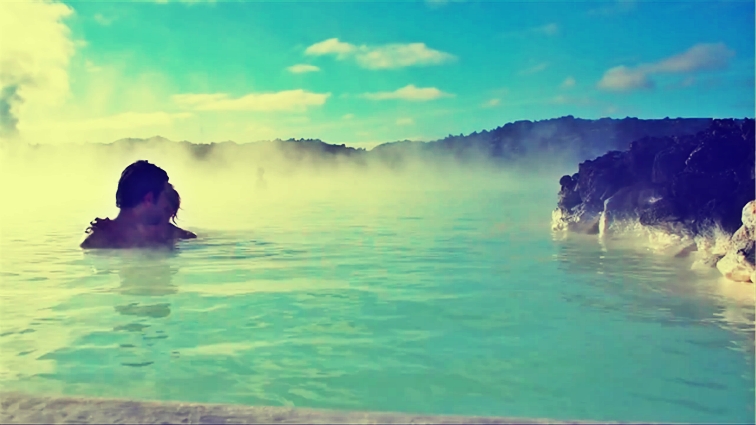 Our next stop was Þingvellir National Park, a UNESCO World Heritage site and first home of the Alþingi, Iceland’s national parliament, back in 930 AD. However, the remains of the Alþingi are not the only attraction of Þingvellir.

The landscape is stunning, with lake Þingvallavatn’s waters providing a shade of dark blue to the surrounding red, brown and green. Plus, the ground is constantly moving, a result of Þingvellir’s dramatic location: along the border between the North American and Eurasian tectonic plates. 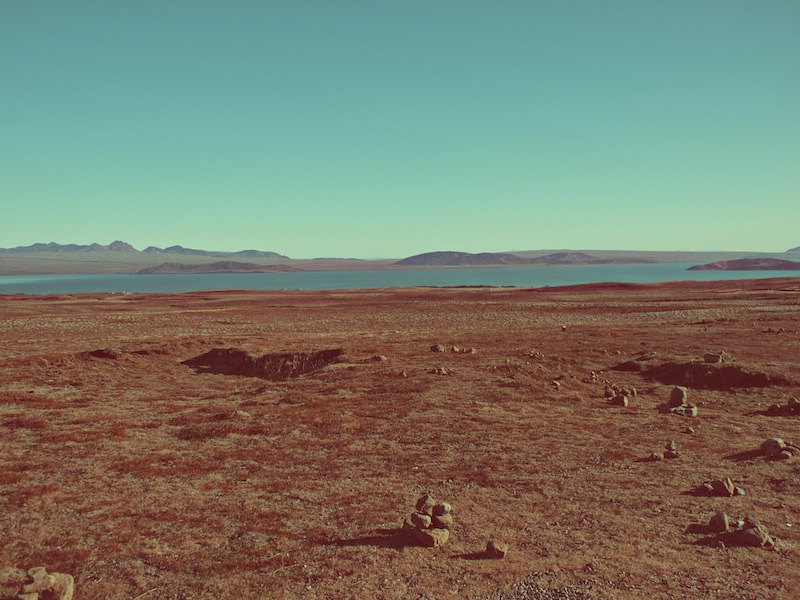 Continuing our journey, we marveled at Iceland’s vibrant landscape. The streams looked straight out of some primordial time, when the waters of the world were fresh and empty of human touch. Looming over the horizon, the magnificent white fingers of the Langjökull glacier seemed to reach for our souls. The roads were almost deserted, and we drove in permanent wonder.

Our penultimate leg of the Golden Circle tour was in Haukadalur, home of the well-known geysers. Although the Great Geysir is currently only erupting a couple of times a day, the reliable Strokkur geyser nearby gives flashy demonstrations every few minutes. 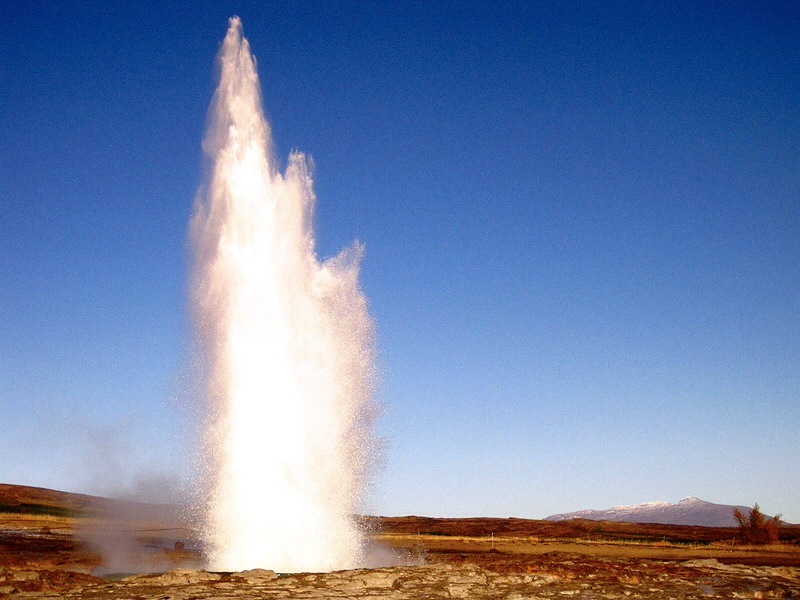 Heading North, we finally reached our last stop: the Gullfoss Waterfall. It is as grandiose as we imagined, spewing mist and thunderous foam. As we approached it from above, the river Hvítá seemed to be swallowed by the earth. Walking further, the huge crevice finally became visible, and the impressive natural portrait was complete, as was our Golden Circle tour. 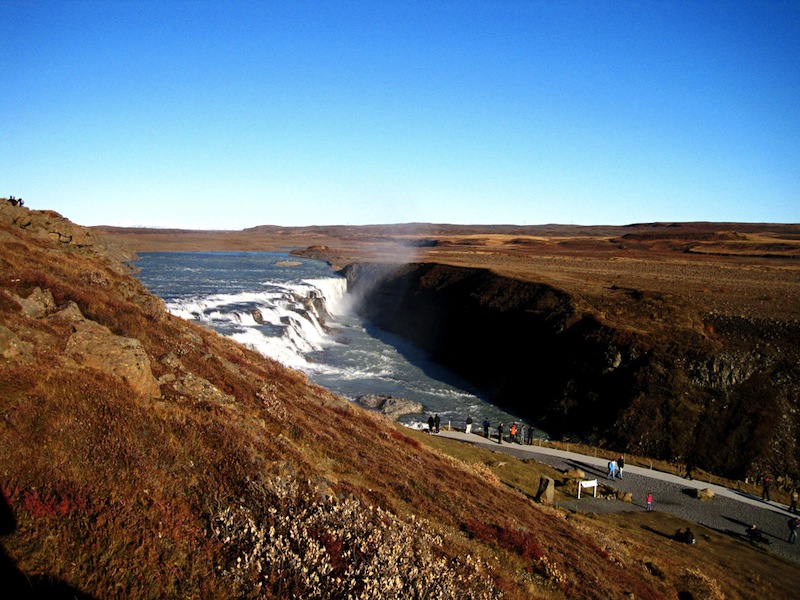 Returning to Reykjavík as the sun began to dwindle, we tried to preserve the shifting landscape in our memories, since photos do it no justice. We also managed to control our impulse to keep driving indefinitely. There is something primal in the pull of the white glaciers, so we made promises to return to Iceland in the future and circle its entirety.

Rejoining friends, warming our bodies through geothermal bliss, exploring quaint Reykjavík, driving along roads bordered by myriad colors, being showered by Strokkur’s spray, tasting the delicious Skyr – we left Iceland madly in love with the place, and look forward to breathe its crisp air once again.

In the meantime, we’ll have to make do with our silly video…

Iceland in the Sun from Lunaguava on Vimeo.