I Guess We Must Be in New York City

New York, New York. That’s how the song goes, a rousing chorus belting away the name of a city so big they had to sing it twice. The sleepless city is a cool world of skyscrapers and shuffling masses, trapped in an endless snow-globe. We all recognize the spellbinding names of its five boroughs: Manhattan, Brooklyn, the Bronx, Queens and Staten Island. Within their borders lies one of the most extravagantly ethereal metropolis ever devised by human hands. 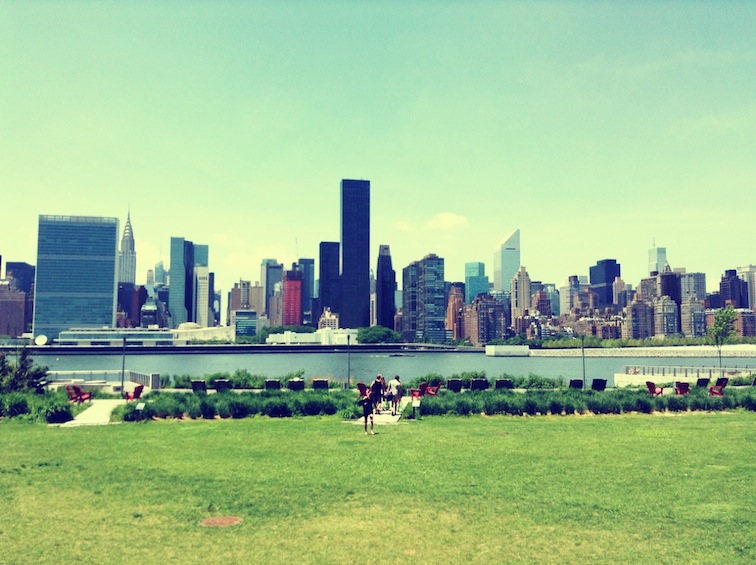 We had trod the sidewalks of New York before. Nonetheless, every time we set foot in the naked city there is a tingling of the spine, a quick motion of the eyes, wide shut by the blaring lights of the Manhattan skyline, just over the Brooklyn Bridge. We usually have no need for a taxi driver, but prefer to meander awestruck through mean streets paved with ghosts of midnight cowboys, every corner a reminder of what New York used to be.

The city’s iconic subway system is our chosen turf, which we have to share in close proximity with more than 8 million other people, which helps explain some misadventures and numerous missed stops. This is alphabet city after all, and if we take the A train we might end up lost on 42nd street, close to where the Hudson River flows and Times Square throbs.

It is our good fortune to have patient friends in Brooklyn, who have guided us through Saturday night fevers and strolls on the waterfront, by Gantry Park, in view of rising buildings and the shadows of those gone. One of the perks of friendly hospitality counts almost as an escape from New York, that is, from one its most notorious trademarks: ridiculously expensive hotels. The good side is obvious, the bad side is we have no advice to impart on that particular department.

Most familiar New York sights can be found amidst the Manhattan madness. The entire island is a cultural playground, dotted with historic monuments and splendid museums. Of the former, the Empire State Building stands as a renowned example, reaching shapely into simian clouds, a beacon of what was built once upon a time in America. Of the latter, there are too many to properly visit in one single sitting. Personal favorites are the MOMA, the Guggenheim and the American Museum of Natural History, displaying stories of squids and whales in Central Park West.

I’ll take New York over any other metropolis in our extraordinary world. Only Hong Kong and Tokyo come close to the sheer magnitude of its thrumming heart. From Rockaway Beach to Wall Street, the city is ripe with tales of angels with dirty faces, entire throngs desperately seeking the elusive, sweet smell of success. It’s a beautiful, tough city, where ghost dogs share space with Broadway ladies and everything seems to be open until the 25th hour.

Day and night are strikingly contrasting experiences in New York City. In the daytime, its beating soul is Central Park. Circling the Jackie O. Reservoir, we see tourists snapping photos surrounded by green and sunlight, sheltered from crimes and misdemeanors, and joggers sweating while making laps, hips gently swayed by echoes of Harlem. The luscious park is a gigantic maze of changing colors, from the bursting green of Spring to the serene auburn glow of Autumn in New York. Glancing at all the faces enjoying a sunny day, it’s hard to imagine what New York couples fight about.

Outside the soothing shade of Central Park, the story gets a bit more complicated. A hot morning too often turns into a dog day afternoon, when everyone is walking in one of those New York moods where you end up with a new haircut and a busted lip. Fast-paced and streetwise, New Yorkers are always on the move, either making small talk at 125th and Lenox, skipping breakfast at Tiffany’s or looking upwards for a man on wire. Yuppies and hipsters rub shoulders with husbands and wives, bad lieutenants and godfathers, all living for the city and only certain that they’ll never give it back to the Indians.

In our trips to the Big Apple, we lost entire days strolling between Manhattan and Brooklyn, counting myriad Seinfeld references, stopping shortly for bagels and pretzels which never fail to make us thirsty, climbing the High Line and wandering chaotic streets in view of the Flatiron Building. Around Rockefeller Center, we kept a lookout for famous faces, hiding from a shaft of sunlight. In Brooklyn, we met friends who refused to let us pay for anything, making me feel like the king of New York, and walked past the shell of a building where once Serpico got treated for his wounds. On each occasion, upon departure we could only think of the next time we’d be back in NYC.

The city has a magnetic pull, like an ancient forgotten spell, perhaps lost to its native inhabitants who have more practical things to consider, like trying to survive in a sprawling realm of shuffling feet and insanely high rents, trying to lighten the weight of an entire metropolis bringing them down. As a mere visitor, I am able to focus mostly on ideas of the city, detached from mundane preoccupations, and can look at it as if I were the only living boy in New York, below clear skies, listening to a rhapsody in blue of my own making.

As we headed out to Union Square, where we took the Amtrak Adirondack to Montréal, to explore a new city and meet an old French connection, my mind drifted to the realization that somewhere, at any time, there’s a boat that’s leaving soon for New York. To all those arriving, I hope the city dances for them. 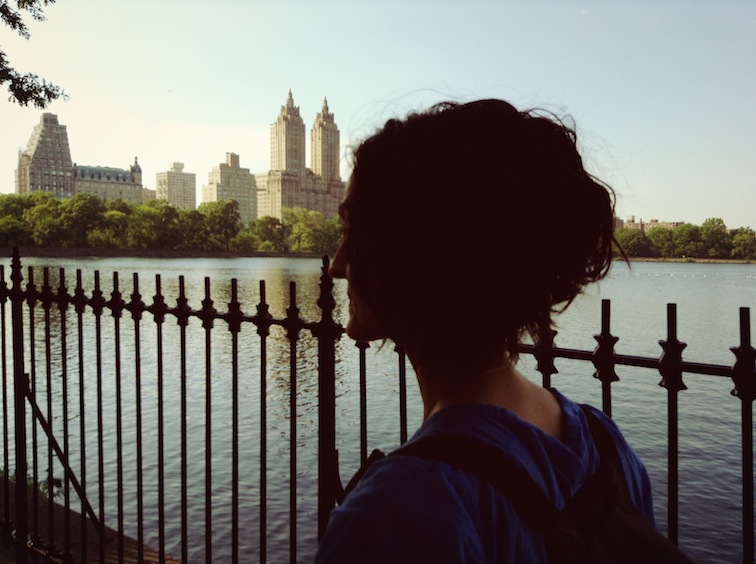 Elle in Central Park, by the Jackie O. Reservoir 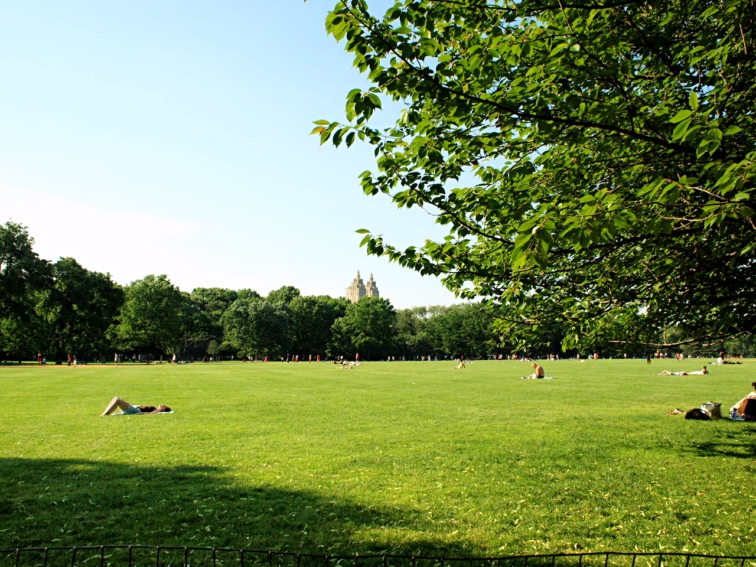 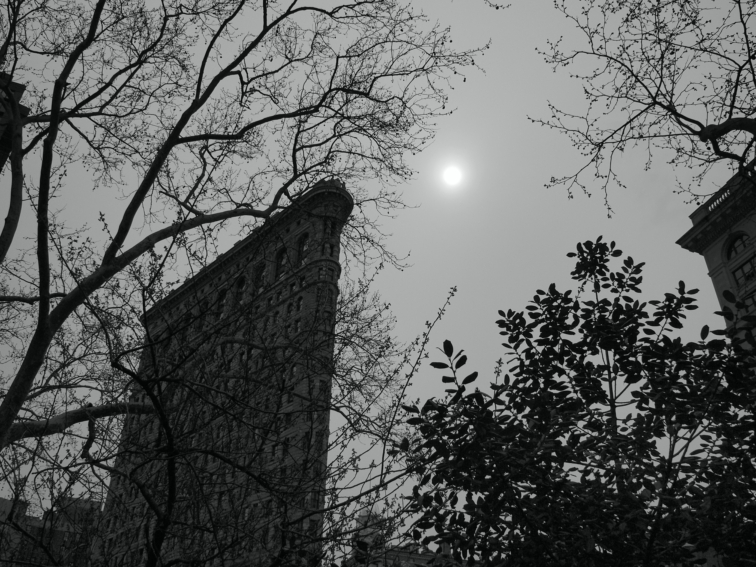 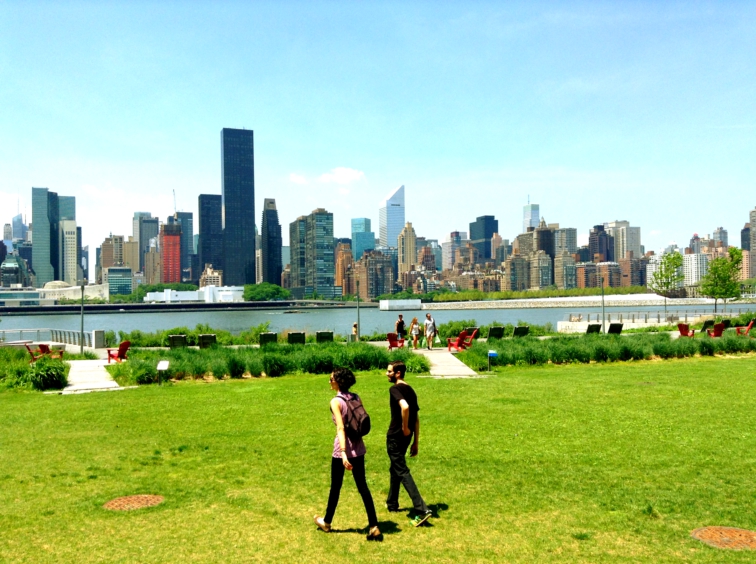