Out of my way! Coming through, people. Coming through, I said! Could you guys go any slower? I get the horses – they’ve got another set of legs on top of them, which looks unpleasant. But you? This isn’t even very steep. What, puffing already? We’ve been walking for five minutes, for crying out loud… Go see a doctor, why don’t you?

Like the t-shirt, mister tourist. Good luck not freezing your ass off in a few minutes, by the way. You realize you’re climbing a volcano in the early morning, right? You must have noticed the cold wind rising, no? Yeah, it’s not stopping anytime soon. Actually, it will blow harder as you go further up. Altitude and such, know what I mean?

Hey, I’m going in the front, buster! I’ve been doing this trail for more years than I can count. There’s been tremors, ash, lava, you name it. Even bandits! I’ve had my share of shady encounters by moonlight, if you catch my drift.

And who are these two idiots ambling along? Funny-face and squinty-eyes, all effort and no gas. I’ll give them five minutes until they’re gasping for breath. Happens every time.

And there goes the first hat of the day… No, you should definitely go after it – best of luck outrunning the wind. Wrap yourselves tight, people! It’s only gonna get worse. Sure, I’m an optimist – go tell it on the mountain.

Interesting news: squinty-eyes is apparently celebrating a birthday. One year older. If I were mean I’d say it shows. Surprised he’s not getting on a horse…

Here comes the good part. Love it when the crater first pops up. No matter how many times I do this, it gets me every time. I’ve seen images of old buildings in the jungle that bear a resemblance to it, but there’s still nothing like the real thing. Heard it again a couple of days ago – the soft rumble. Everybody freaked out, but I know it was just a yawn.

Hope I don’t see it angry in my lifetime. Even I couldn’t run fast enough. 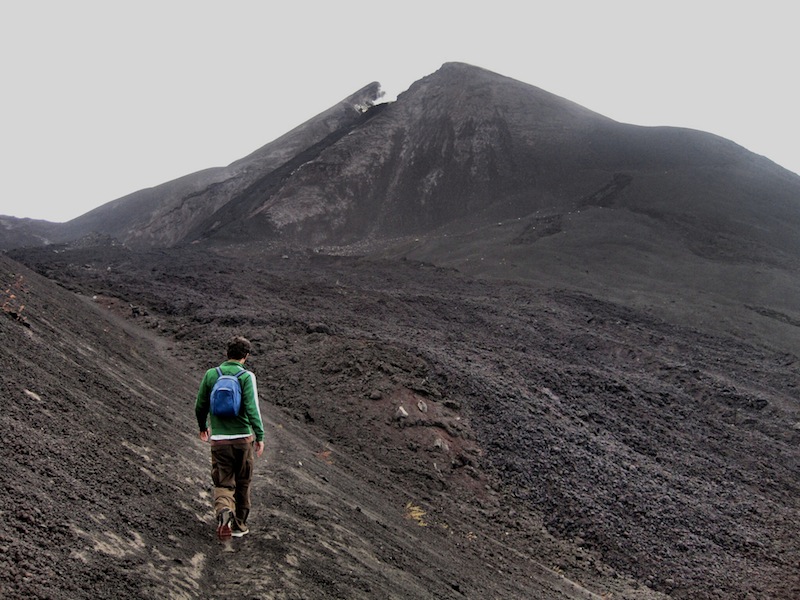 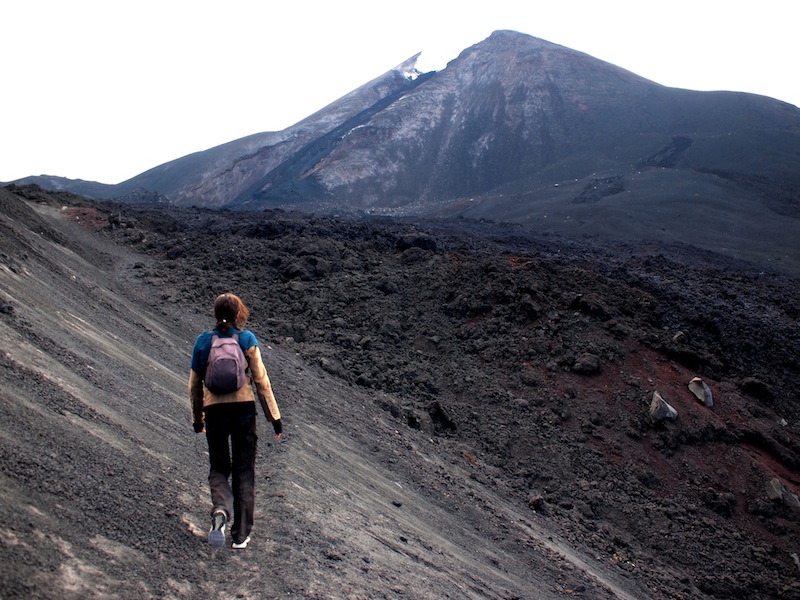 Ah, the lava store. Hard to believe it’s still standing with this hard wind blowing. Hell, hard to believe they call it a store! That’s some fancy marketing right there. Gather some rocks, stick them on pendants and presto – a booming business venture. I’m amazed they don’t franchise…

Why do I keep torturing myself expecting snacks? I know everybody’s here for the marshmallows – yeah, that old trick. Get a marshmallow, put it on a stick and let the volcano’s breath do the rest. Neat, but I am unable to chew those things. C’mon, who calls that food? 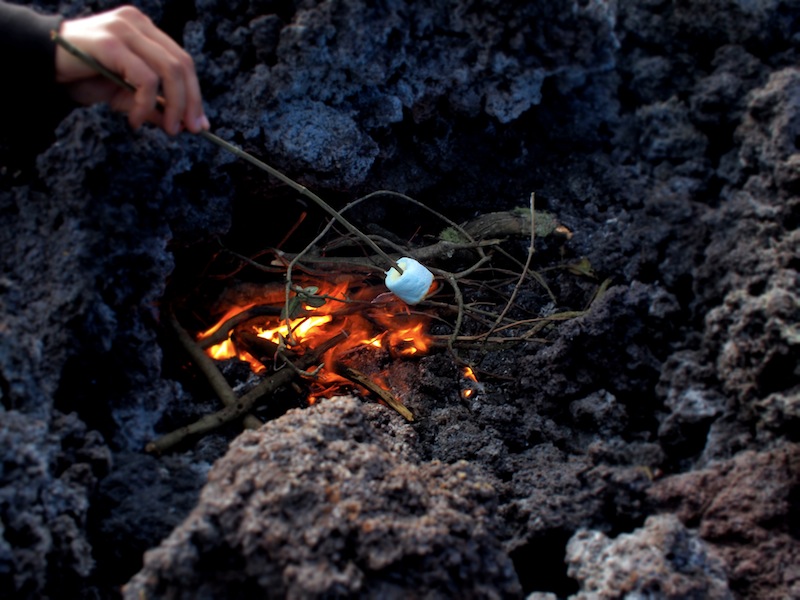 OK, who’s got a proper meal? You got something there, funny-face? What’s that between your fingers? Fine, I’ll sniff it – may even lick it. Hmm… A bit salty, not exactly filling, but worth the effort. 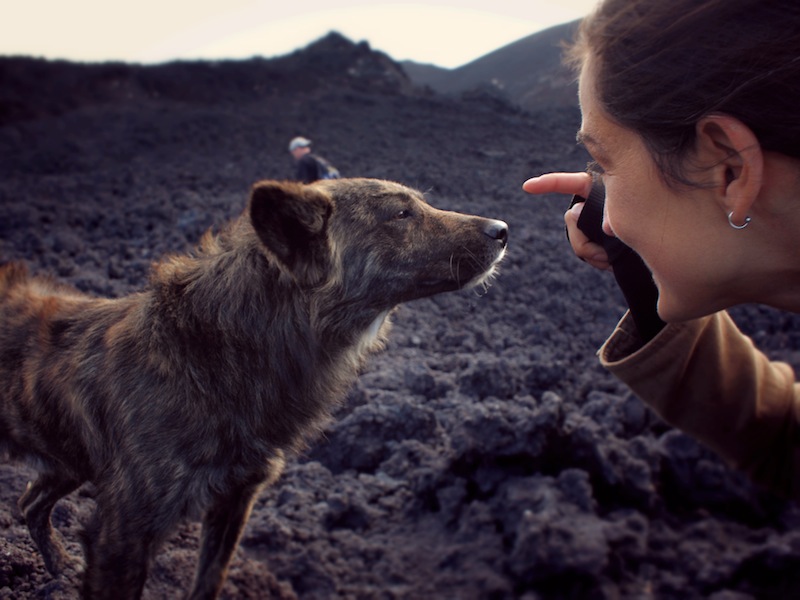 This is when they’re busy munching away. Perfect opportunity to check out the view, which I usually do.

I like to see the other volcanoes in the distance. One they call fire, the other water. The one in the middle has a strange name I can never remember. Glad I’m climbing this one though. I have a penchant for black rock, not to mention gigantic holes spewing so much detritus it creates a staircase. Right, I’m the weird one – meanwhile, everybody else is paying a bunch of quetzales to sweat their asses off and maybe get killed by a sudden eruption. 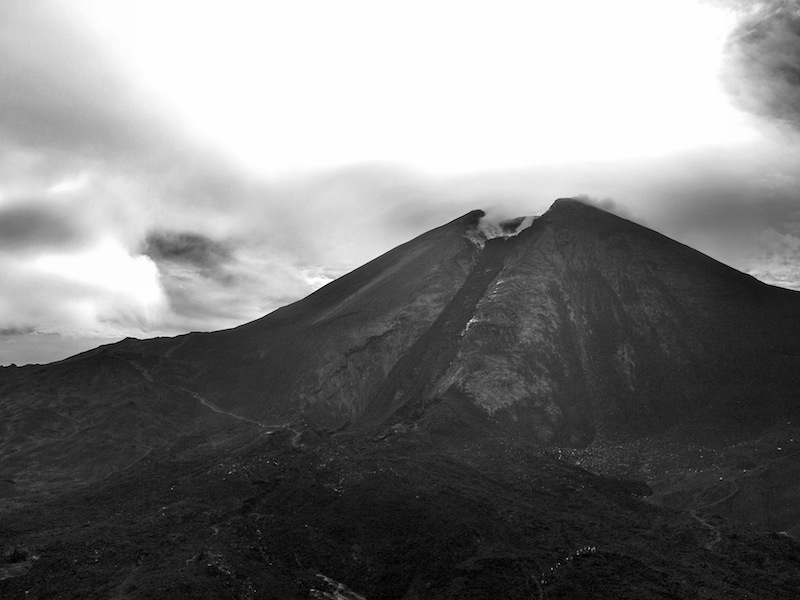 Still, I can’t deny they’re beautiful – these huge, living piles of rock, sleeping for centuries and only waking up in short spurts of hours. It’s impressive, you know? Makes you think about time and permanence and all that stuff. I just hope to keep on running for a few more years. Coming in the morning, returning for the evening trek, looking at all the stars, feeling the wind wash away the dust, going back home.

I wonder when my birthday is.

Screw it, we’re all old these days… 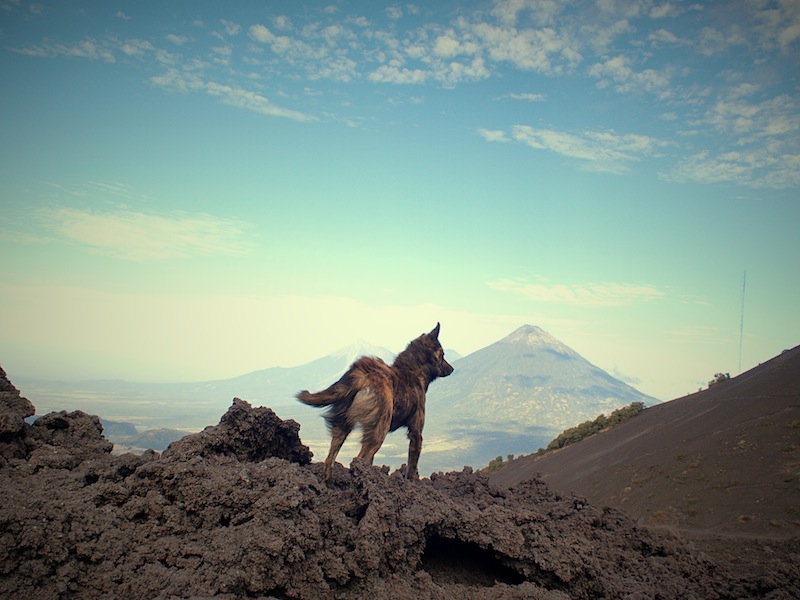