Barcelona has steadfastly risen in the world’s recognition not just as Spain’s second city but as one of the ultimate European destinations. The capital of proud Catalonia sits vibrant by the Mediterranean coast, lulled by the sea breeze and echoes of a rich history.

A desired metropolis for centuries, Barcelona has always attracted visitors to its shores. According to legend, Hercules was the first, founding the city during one of his Twelve Labours.

Although mythological beings have given way to business people and tourists, Barcelona is still a beacon to all wanting to experience firsthand the old sensual pleasures of the Mediterranean lifestyle. Open-air markets, cozy restaurants, ancient narrow corridors, sunshine and seafood are some of the staples of the Catalonian city.

There are nonetheless three factors which have majorly contributed to Barcelona’s current place on the tourist map:

Today, the occasional tourist will most likely have its first contact with Barcelona through a walk in La Rambla, a pedestrian walkway full of trinket shops and street performers. Although it is always busy, La Rambla eventually flows into the sea, past the gigantic statue of Columbus. It’s perhaps this contrast between the close quartered city and the openness of the sea which gives the city its particular charm.

Meandering along the Ciutat Vella gives the impression of being stuck in times past, namely in the area known as Barri Gotic. It’s nonetheless somewhat striking when after a dark medieval building comes a trendy shop selling modern design items. But the graphic arts are part of the city’s soul.

In the Sants-Montjuïc district lies a museum dedicated to a brilliant Catalonian painter: the Joan Miró Museum. Close by is yet another museum, but dedicated to the most famous Spanish artist of all time, who resided in Barcelona for a few years: the Picasso Museum.

As for Gaudí, he is everywhere in Barcelona, a fact recognized by UNESCO World Heritage. La Pedrera/Casa Milà and La Casa Batlló are both prime examples of the Catalan’s architect’s work, and are situated in the Eixample area. They are both beautiful to look at from the outside, with their undulating shapes and ornamental extravagance, but are worth a visit inside.

La Pedrera/Casa Milà has an acclaimed rooftop straight out of a fantasy book. Its chimneys and skylights spike into the sky, giving it a shape reminiscent of a medieval forest populated by imposing knights. 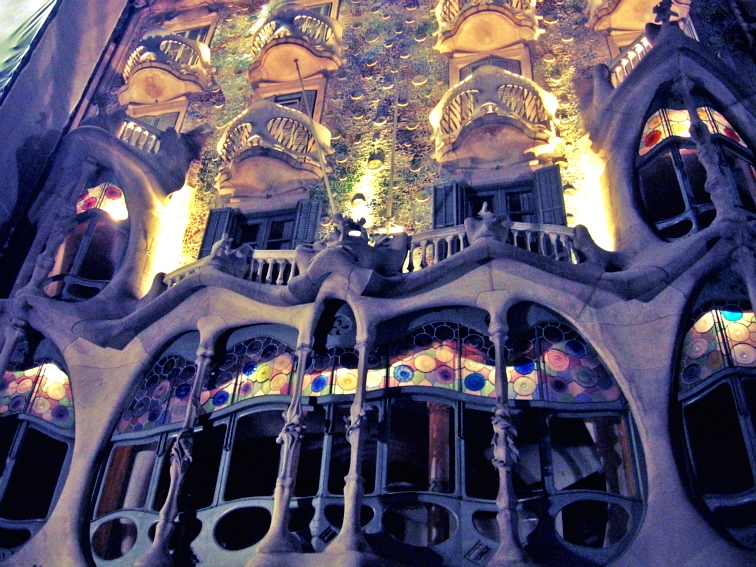 Also in the Eixample quarter stands Barcelona’s biggest tourist draw and its unofficial symbol: Gaudi’s La Sagrada Familia. This incomplete architectural dream (or some would say nightmare) rises immense from its mystic ground and casts a grandiose shadow over the entire city.

Another renowned Gaudí creation is the Park Güell, a multilevel garden complex and also home of the Gaudí House Museum. It is full of green and deserves a slow walk through its many points of interest. However, as with most iconic places in Barcelona, it is usually crowded with tourists and locals alike.

Along with quite a few sights of Barcelona, the Park Güell made an appearance in Woody Allen’s Vicky Cristina Barcelona. The movie and its glamorized view of Barcelona created even more buzz for the Catalonian capital, and soon tourists were pouring in, not only looking for Gaudí and the beaches of Barceloneta but also for sun, romance, art and excellent food. It’s true that all these things abound in Barcelona, but they usually take time and effort to be found. And, once found, they might have to be shared with a gazillion other people looking for the same thing. 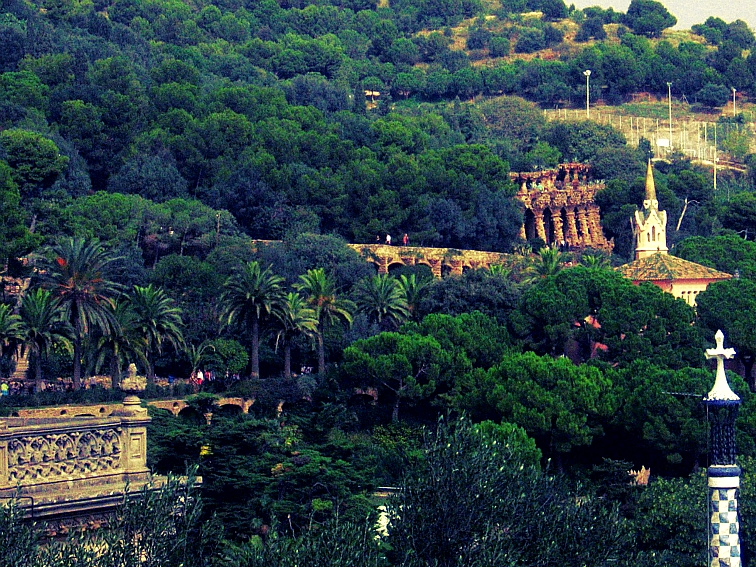 Back on Park Güell and its luscious forest of green and multicolored mosaics: there will be other people appreciating the scenery. Sometimes, namely in the Summer months, it will be too hot and crowded. It’s unlikely it will ever be deserted like in Vicky Cristina Barcelona. An you will not have the bright mosaic salamander guarding the main entrance to yourself. 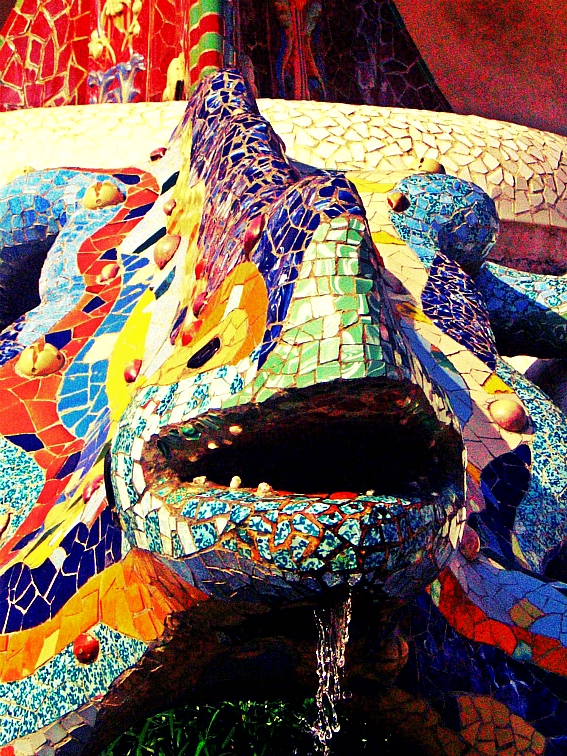 Salamander at the main entrance of Park Güell

Even walking the streets of the Barrio Gotic it is at times difficult to find Catalan or even Spanish spoken. There is no escaping Barcelona being one of the world’s leading tourist centers. On one of my last visits, I dragged myself and a friend through apparently every nook and cranny of the city apart from the Inland Suburbs, and could only find people speaking English. Our recurring question was: where are the locals?

Since we were staying with Spanish friends living in Barcelona, we got our answer when they joined us for a night out. The locals are everywhere. But as with every major modern hub with a large tourist trade, they have adapted to the human influx by creating their own spaces within the city.

It works almost like a fantasy novel: we left the house in central Barcelona, walked towards the by now familiar Ciutat Vella, kept chatting and enjoying the warm night, and suddenly I had no idea where I was. There were less and less people around us, until there were none. Turning corner after corner, we marched merrily onwards. Then, people and lighted establishments started appearing. The language spoken was Catalan. We had gone through the looking glass.

We were obviously not the only tourists in these secluded, mysterious corridors within busier corridors. But the tourists were very few, and were also accompanied by locals. Knowing other cities around the world, this illusory trait has come to be expected. It keeps it bearable to inhabit if not staying merely for a long weekend. No matter how relentless the run: cities are bigger than they appear.

Barcelona is undoubtedly a colossal city. Its ancient streets stretch from the hills of Tibidabo to the placid shores of the Mediterranean. Its allure, on the other hand, covers the entire globe. Go see it, lose yourself in its sinuous alleys and you may just find the secret entrance to its Catalonian heart. 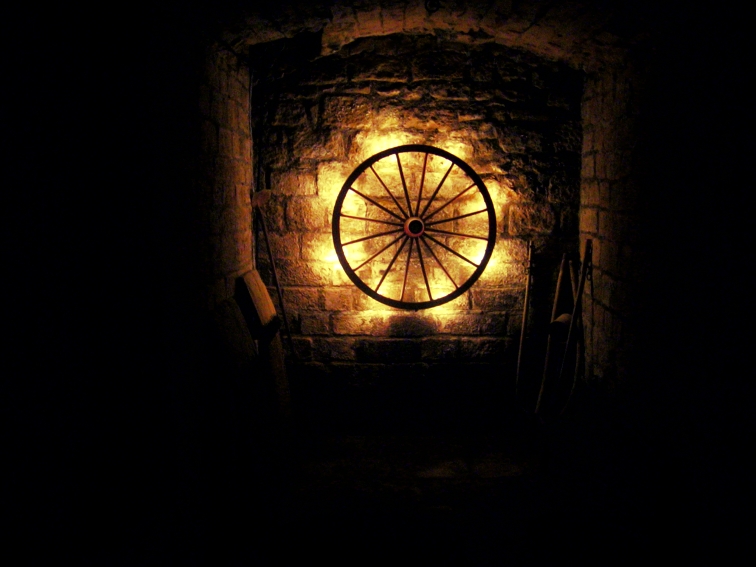 The sun and the wheel of time in Barcelona