Zanzibar, Island of Sand and Stone

Before idyllic beaches and the shimmer of the African sun, there was only a name, lingering in the tongue as a bumblebee taking flight. There are not many names in our world which cast the same exotic spell as Zanzibar, the ancient spice island of Tanzania.

To a young imagination, Zanzibar meant unfathomable distance, luxurious spices, dark-skinned warriors and traders; a place at the nexus of another, more adventurous world, where childhood heroes like Corto Maltese wandered the mysterious streets of Stone Town, and whose location mirrored other fabled lands such as Shangri-La or Timbuktu.

As a visiting adult, the island by the salted sea kept its ancient allure, but acquired knowledge of its past and current strife made it a less ethereal land. With blinking eyes, still heavy with visions of mainland Tanzania, the decay of Zanzibar’s structures and the poverty of its people appeared as bottled ghosts of an illustrious past. However, and as the crumbling mansion of notorious slaver Tippu Tip can attest, Zanzibar’s past was not free of abhorrent sin.

Currently, Zanzibar is first and foremost an archipelago, consisting of a couple of main islands, Unguja and Pemba, and several surrounding islets off the coast of Tanzania. The biggest island, Unguja, is colloquially known as Zanzibar or Zanzibar Island and for all purposes is the place I will refer to whenever mentioning Zanzibar.

Zanzibar’s history is long and intrinsically linked to trade. Persians, Arabs and Indians settled on its shores to conduct trade between the Middle East, India, and Africa. In 1498, Vasco da Gama sailed into Zanzibar, turning it into a Portuguese possession for the next two centuries. After 1698, Zanzibar was controlled by the Sultanate of Oman. It was during this period that Zanzibar City became a key player in the East African slave trade, an ignominious blemish in its history which lasted until the late 19th century. Eventually, Zanzibar became a British protectorate, gained independence, endured a bloody revolution and finally joined the United Republic of Tanzania in the 1960’s as a semi-autonomous region.

We are now firmly in the present. Zanzibar is poor and gets most of its money from tourism. The island still suffers from power outages and it’s not uncommon to hear the whirring of generators during nighttime. Life expectancy at birth stands at a measly 57 years. What the future holds is anyone’s guess. Meanwhile, a tireless sun and beautiful sandy beaches continue to attract visitors, who may or may not join one of many spice tours seemingly available in every corner.

The influx of tourists is enabled by plane or ferry. We flew out in a minuscule airplane to Dar Es Salaam, but arrived to Zanzibar City by ferry, through the calmer waters of early morning. Zanzibar has endured several ferry tragedies in recent years, mostly due to overloading. We were apprehensive, given past unnerving experiences, but the 2 hour trip was a breeze.

The approaching view of Stone Town, the historical center of Zanzibar City and a World Heritage Site, sheds a bit of light on the lasting appeal of this ancient spice island. Rising from the Indian Ocean, the House of Wonders, behind the Forodhani Gardens and close to the Sultan’s Palace, could have played a part in one of Sinbad’s adventures. Its external verandas, supported by cast iron columns, give the impression of a different time and place.

However, upon leaving the harbor and getting the passports stamped, one of the first places we saw was the Mercury bar, whose name celebrates the island’s most (in)famous native son: Freddie Mercury. The mix of bombastic rock, bronzed skin and decayed buildings gave us a curious introduction to the island’s conflicted present.

Of our week in Zanzibar, we spent a mere day in Stone Town. We meandered through its tunnels and narrow streets, sweating under a sweltering sun, in view of the Old Fort and under the smelly spell of cloves and the unique assembly of traditions and architecture. We were aware of the old city’s history, but when a place has a former Slave Market as a landmark too many questions begin buzzing around an already overwhelmed brain. The stones of Zanzibar are teeming with the trapped ghosts of slavery, and the dizzying heat almost brings the distant, odious sounds of the whipping tree back to life. Add to it a continuous flow of sandal-wearing amateur photographers and sightseers such as ourselves and it may be understandable why we spent most of our time idling by the beach in the northeastern coast.

Admittedly, Zanzibar was a lost world for us to find. Still reeling from the magnificence of the Serengeti and Ngorongoro, our thoughts were mostly directed towards gazing at the luscious sea while resting under a palm tree. We were definitely more focused on our present than on the island’s past – at least, the unpleasant one, or the one that is removed from childhood dreams because it is all too real. Zanzibar was first and foremost a name charged with grizzled fables, like Venice or Taprobane. 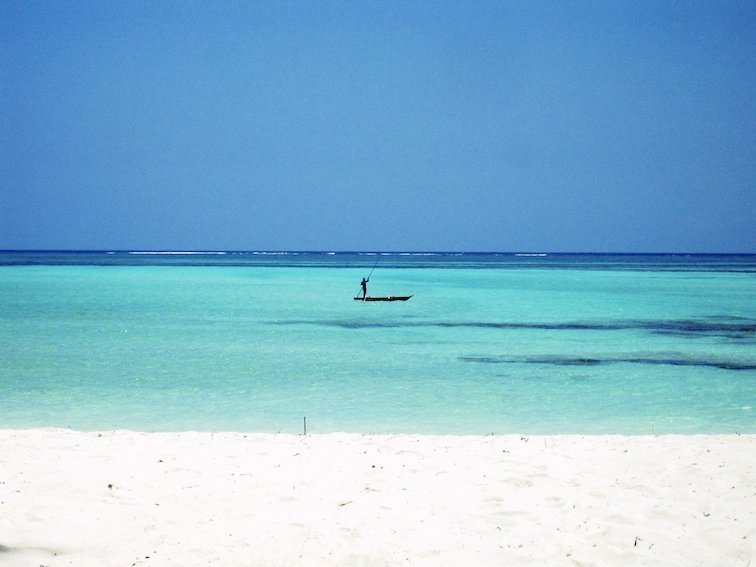 Black and blue in Zanzibar

So, when we saw a dhow floating by in the distance as we sat in the luxury of Pongwe Beach Hotel‘s shadow, we imagined not ignominy but adventure, not our expensive and lazy holiday but a stream of characters smiling from the sea: Dr David Livingstone just before his final expedition, attempting to right an unspeakable wrong; a multiplicity of ethnicities who have built Zanzibar and continue to display their mosaic of colors at every corner; Siti binti Saad singing taarab in Swahili; a trader holding ginger, saffron and nutmeg as the water glimmers under a glorious sunset… 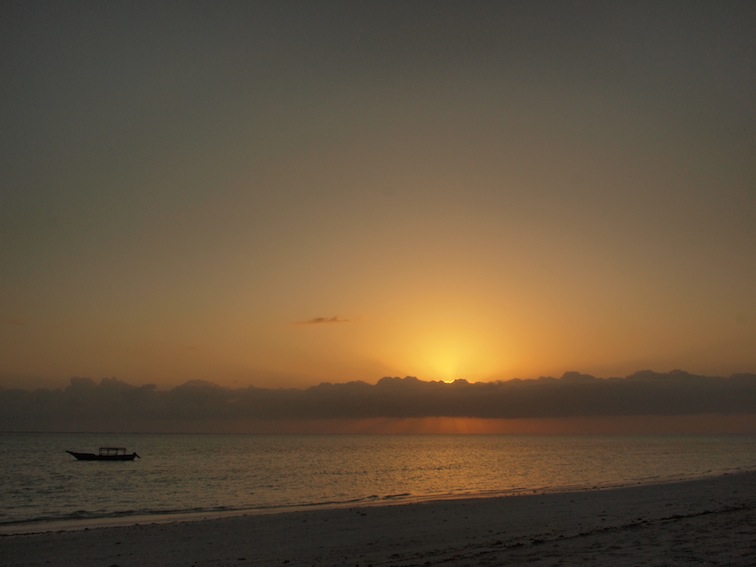 In Neil Gaiman’s “Ramadan”, a story found in Fables and Reflections, the mighty Caliph Harun al-Rashid makes a deal with the Dream King, Morpheus. In exchange for taking the greatest city the world has ever known, Baghdad, as a gift, Morpheus will ensure the magical city will live on forever. The Dream King accepts, and puts Baghdad in a bottle. Harun then wakes up in a desolate city with no traces of its former glory, and returns to a crumbling palace. In the currently devastated Baghdad, an old man tells this story to a child, who is left bewitched by the tales of gilded wonders and flying carpets swaying through the diamond skies of ancient Baghdad. The glorious city endures in our memory, and our retelling of its story. 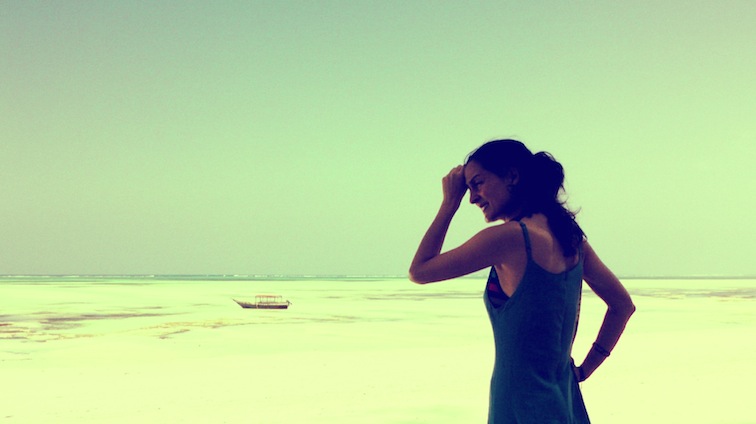 The luminescent colors of Zanzibar

Perhaps one of Zanzibar’s ancient rulers made a similar pact, and somewhere in our dreams we can still access the Spice Island of misfits and adventurers, untainted by human cruelty, where the natural beauty of its forests and the liquid incandescence of its sea remain unspoiled and protected. As for the sand, it is still soft and splendid, and perhaps occasionally used by the Sandman to sprinkle over our eyes… 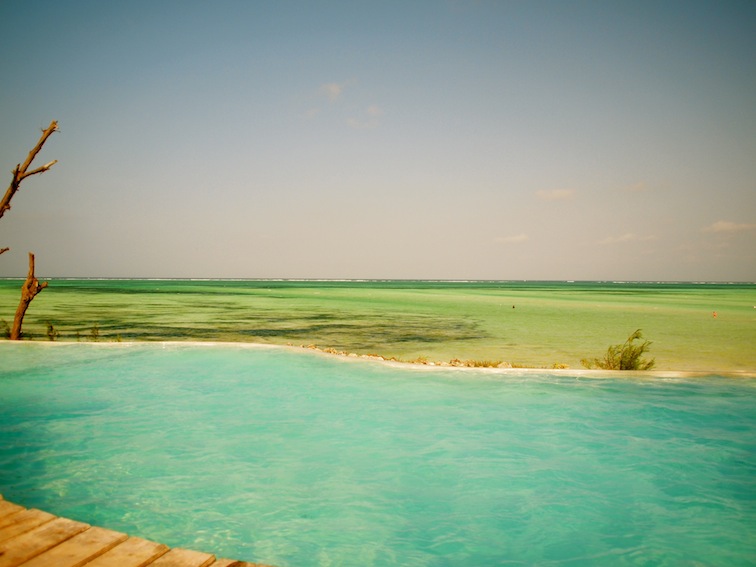 Shades of water in Zanzibar