The Villages Around Lake Atitlán

We were coming from San Cristóbal de las Casas, Mexico, through a winding road riddled with steep cliffs and pale clouds. Following hours of sidestepping fallen rocks and careening chicken buses, we entered the town of Sololá, Guatemala, where we squeezed into a narrow road brimming with street vendors and the clap-clap-clapping of indigenous women making tortillas.

Thinking it to be our final stop, we looked left and right, trying to spot the famed volcanoes of Lake Atitlán. Seeing nothing but the chaotic driftwood of a bustling town, we assumed Panajachel would be further ahead. When our van left once more for the mountains we made sure to keep a lookout for any volcanic evidence or the glimmer of a big lake.

As evening approached, gathering mist in its opaque blanket, we began to swerve downwards, until our horizon was covered in grey. Suddenly, we noticed we were seeing not only clouds but also water –  a shimmering blank canvas, nearly undistinguishable from the heavens. We would soon be arriving in Panajachel. We were almost home. 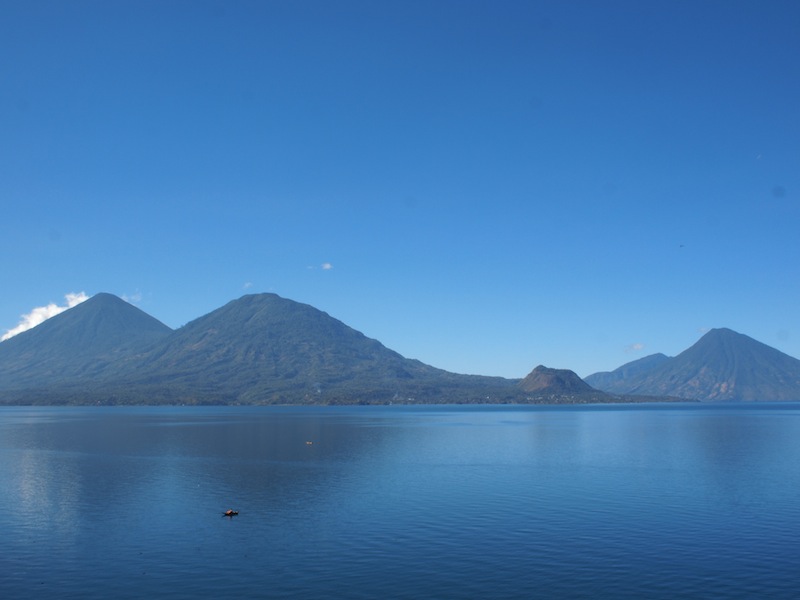 As we made a life in Panajachel, only occasionally aware of the passing of time, our days became a blur of market stalls, ice-cream and sunsets. A honeyed routine had set in, and we were only too happy to embrace it. For two months, our days and nights beat to the whims of the Xocomil wind, unexpectedly raising white crests from the lake’s pacific blue.

Nonetheless, our pesky curiosity also lifted our feet to the villages around Lake Atitlán.

Besides Panajachel, the shores of Lake Atitlán hold myriad villages, each more akin to hidden enclaves than regular settlements. They not only have unique characteristics but also cater to different types of travelers.

Panajachel, being the most common entry to the wonders of Lake Atitlán, is a mishmash of tradition and business, its Calle Santander harboring colorful textiles, restaurants and a usually older crowd.

Most of the young folk arriving in Panajachel leave for San Pedro La Laguna, known as the backpacker mecca of Lake Atitlán. Its bars are fuller, its music louder, its atmosphere more infused with the scent of grassy substances.

For those more interested in unraveling their cosmic plexus, or just doing yoga, San Marcos La Laguna is the obvious destination. Its tiny foot paths lead from one massage center to another, with the odd turn towards a meditation camp. Outside of Australia, it’s perhaps the best place to stumble into someone playing a didgeridoo.

Although we did not set foot in all of the villages around Lake Atitlán, we still managed to get an idea of a few of them. Some we visited for hours, others we just dropped by to get a taste and promptly left. All had charming qualities and deserve a visit.

After crisscrossing the lake on several occasions and trying different itineraries, we chose to display two of our favorites: one under the shadow of the Tolimán and Atitlán volcanoes, the other under the imposing San Pedro. Both took approximately 4 hours.

Since we were not pressed for time, our tours of the lake’s shores always occurred in the mornings. This was not due to a natural inclination to rise early, but to the effects of Xocomil, whose winds normally blow harder around noon and into the evening. Having had enough choppy waters to last us a lifetime, and seeing the shaken faces of those arriving to Panajachel by boat in the afternoon, we decided not to risk our stomachs’ regular handling of food and chose our journeying days wisely.

From Panajachel, we took a pickup (3 GTQ/0.3 EUR pp) to Santa Catarina Palopó, to admire its shoreline and the characteristic blue huipil (blouse) worn by the community’s Kaqchikel women. 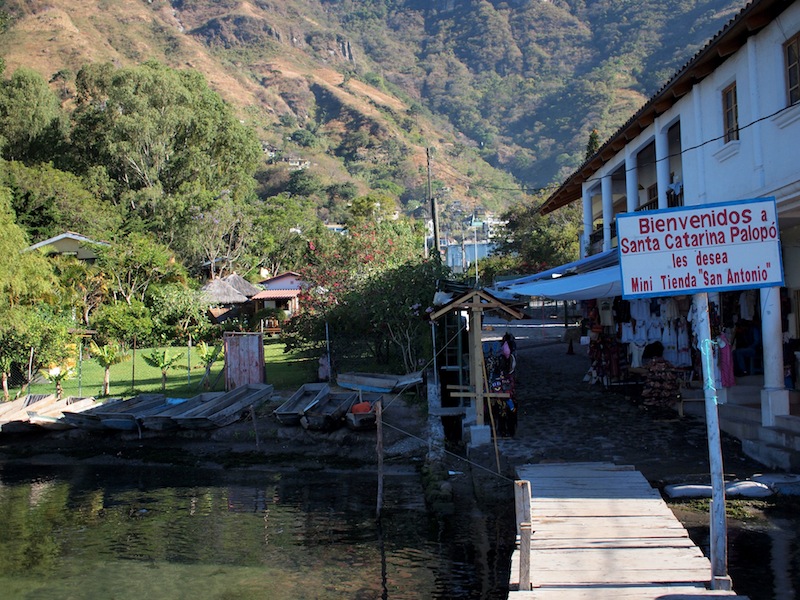 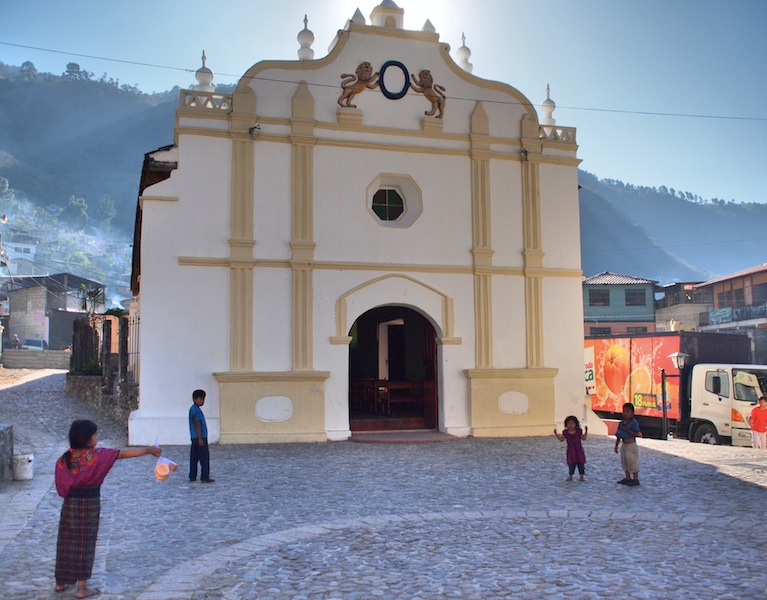 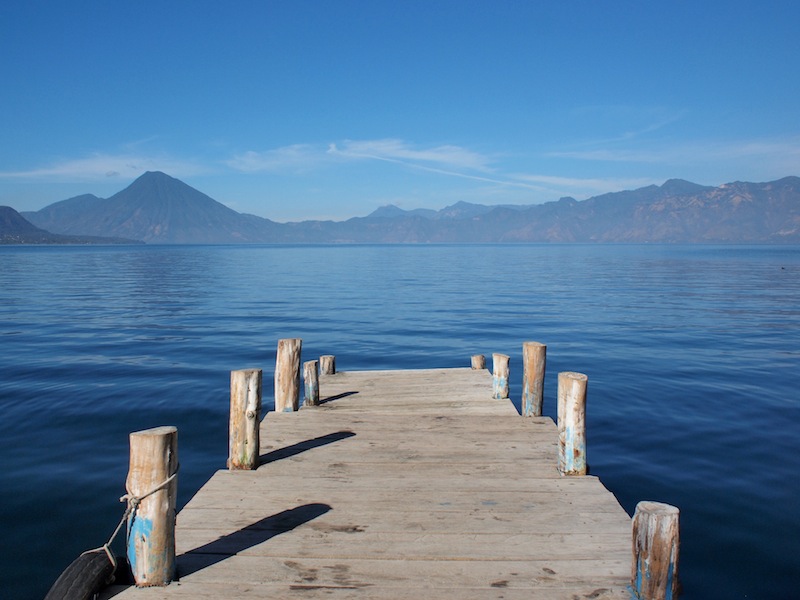 We then hopped onto another pickup (3 GTQ/0.3 EUR pp) towards San Antonio Palopó, renowned for its ceramics and traditional weavings. Our pickup was full of fruit and vegetables to be sold at the local market, which is located by the church’s steps, perched high on a hill. The town is mostly deserted of tourists, and offers gorgeously peaceful views of Lake Atitlán. 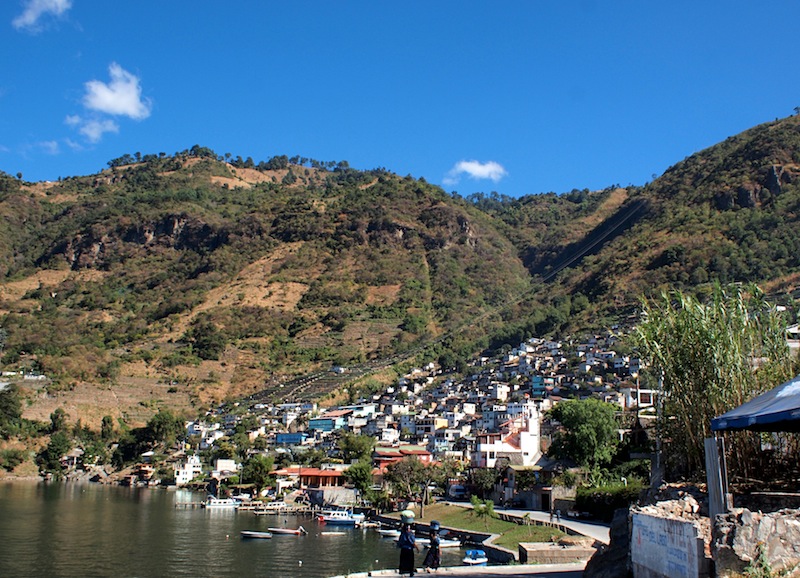 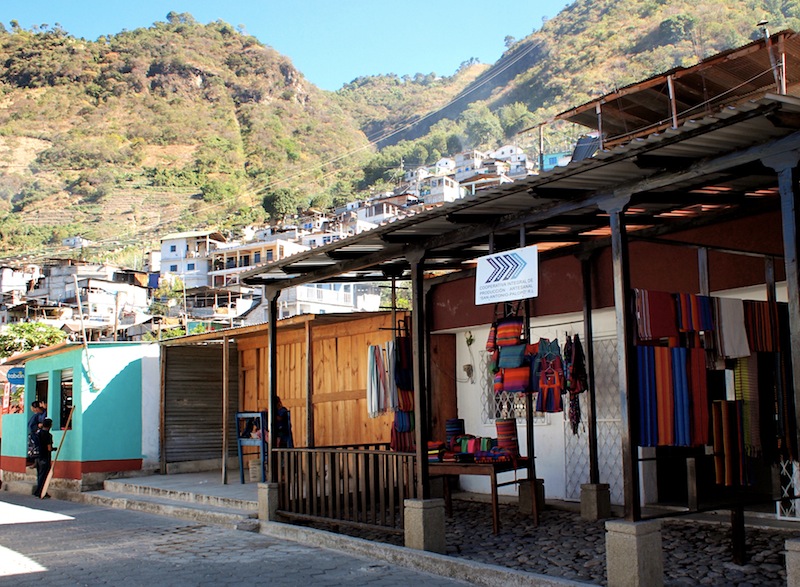 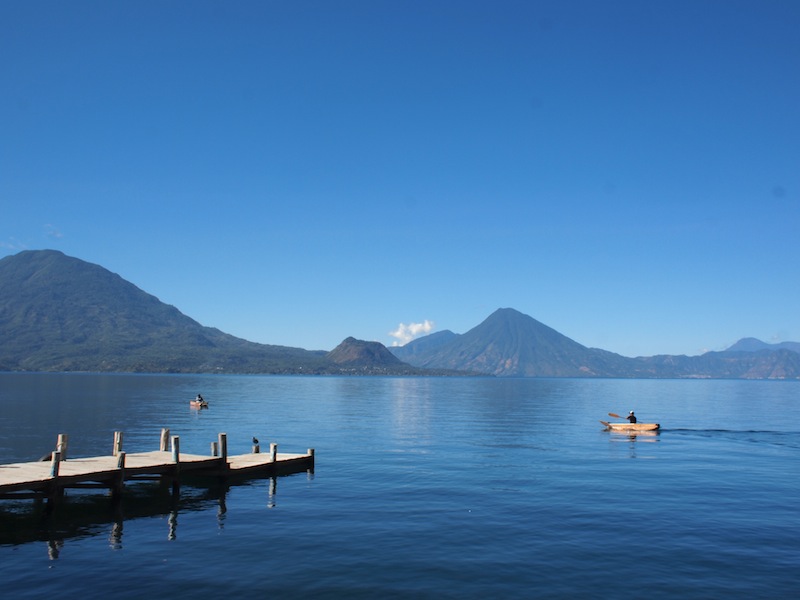 From San Antonio we crossed the lake to San Lucas Tolimán. We took a “lancha” (15 GTQ/1.4 EUR pp), as the boats running the lake are called, and arrived in San Lucas twenty minutes afterwards. It’s a lovely ride, close to green cliffs and secluded houses on the verge of being swallowed by the rising waters of Lake Atitlán. Since it was a weekday, we were the only passengers on the boat.

We found it fascinating to see a completely different view of the looming landscape, and by the time we arrived in San Lucas our minds had readjusted to the striking magnitude of the Tolimán and Atitlán volcanoes. 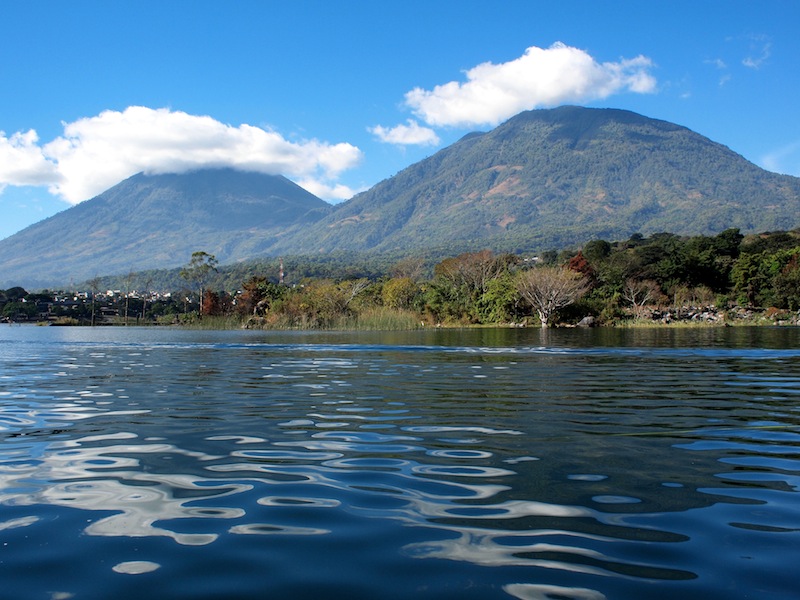 The town of San Lucas does not offer much in terms of attractions, but still provides a great setting for a morning stroll. As with most villages unadulterated by mass tourism, their charm lies in the friendliness of its people, the small markets selling fruit of the season, and the many mellifluous moments lighting an encounter between strangers. 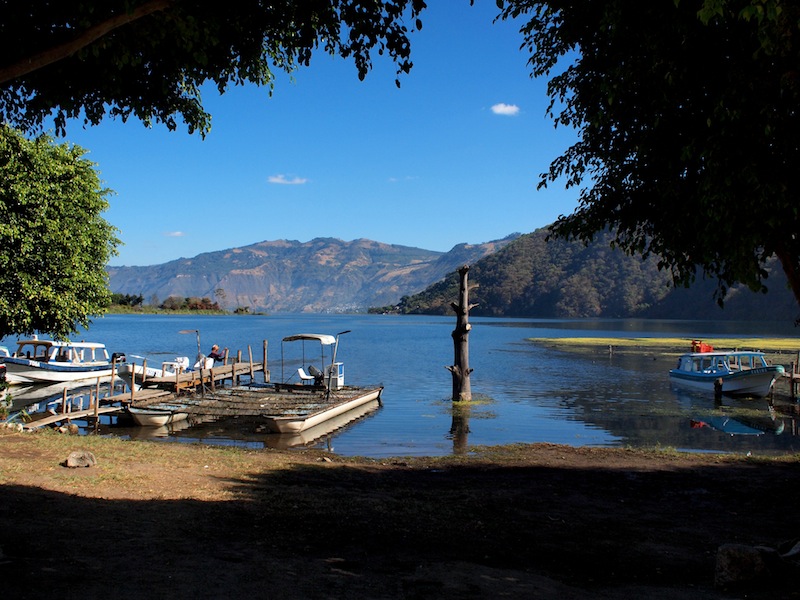 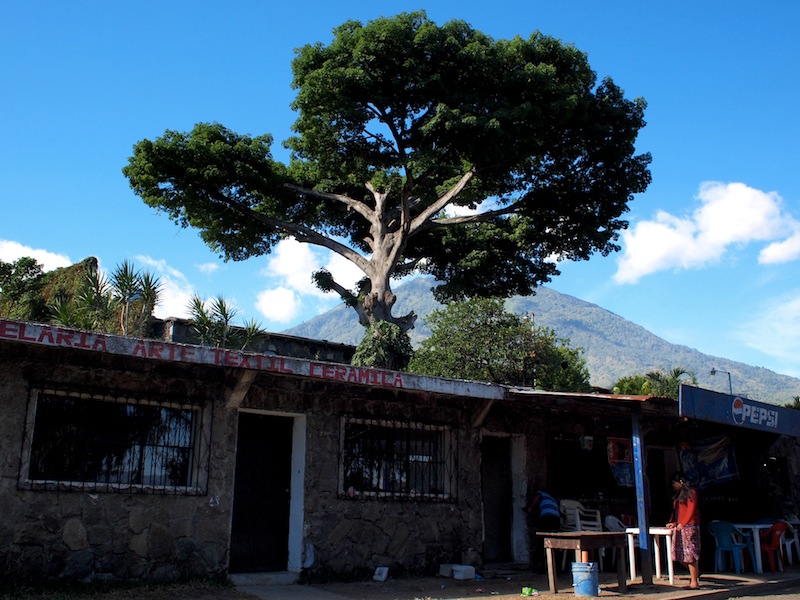 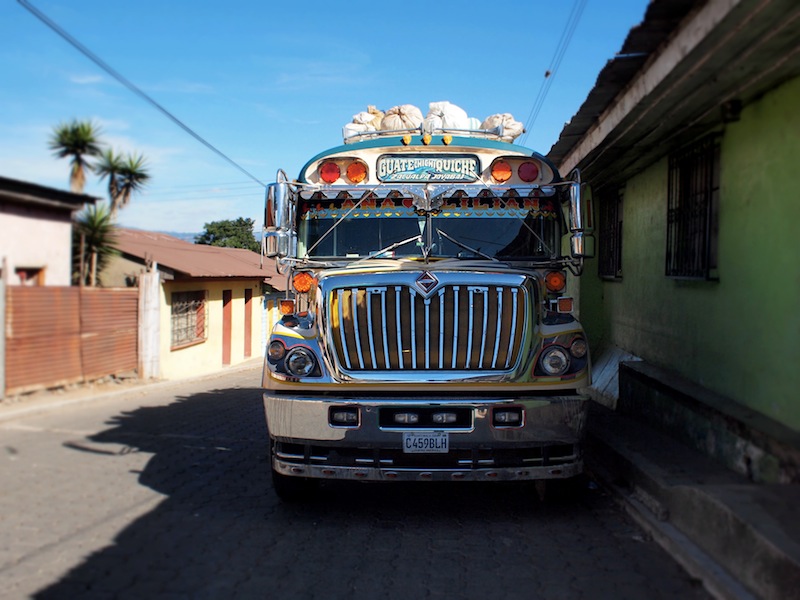 Although there is transportation going to the small town of Cerro de Oro (named after the homonymous hill, which is also known as Sleeping Elephant), we went straight to Santiago Atitlán.

Once again we hailed a pickup (7 GTQ/0.6 EUR pp), and left with our heads in the wind, surrounded by friendly smiles, chickens and machetes.

To our surprise, the road between San Lucas and Santiago is incredibly scenic, passing coffee groves, volcanic rock and yellow rows of corn as the Tolimán volcano keeps watch. 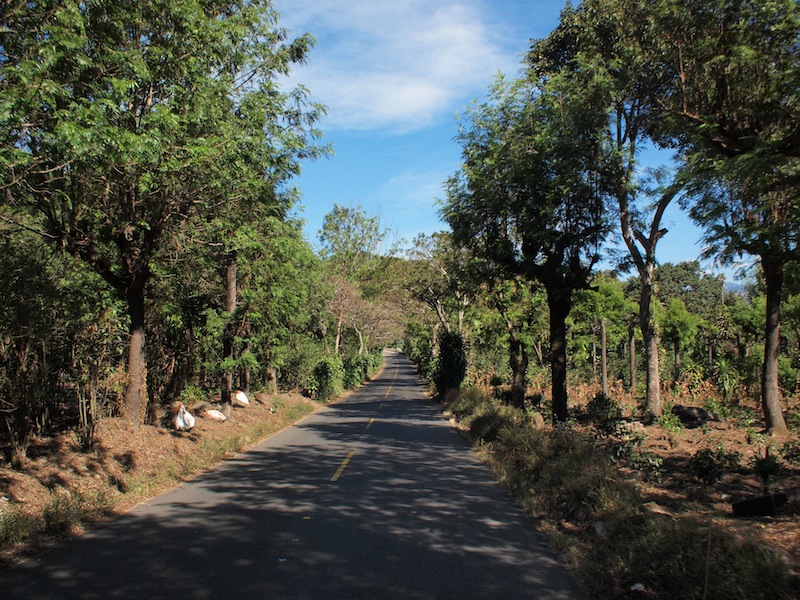 As we veered between shade and light, the Cerro de Oro kept making ever-closer appearances, until it disappeared in our backs once we arrived with windswept eyes in Santiago Atitlán. 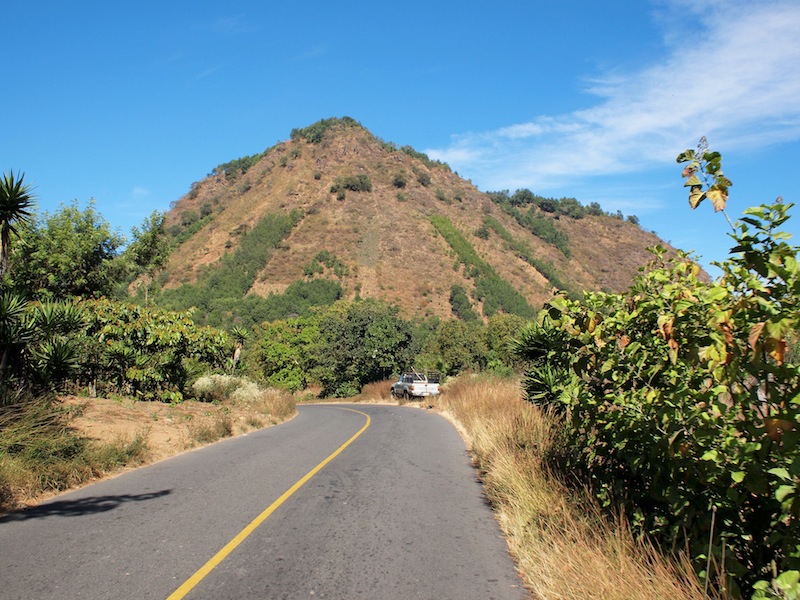 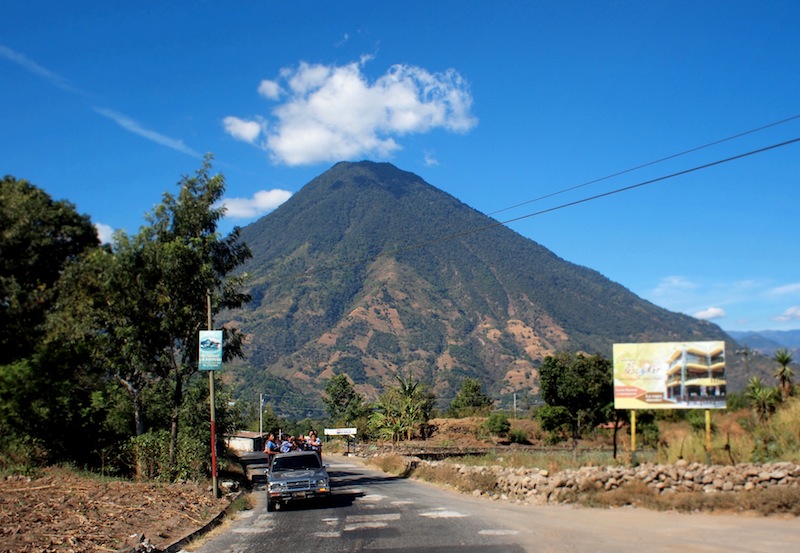 A pickup and the San Pedro volcano

The town of Santiago Atitlán is one of the largest surrounding the lake and was the capital of the Tz’utujil people in pre-Hispanic times. Its main street is lined with colorful textile stalls, while also boasting a busy market riddled with fresh vegetables and various trinkets. 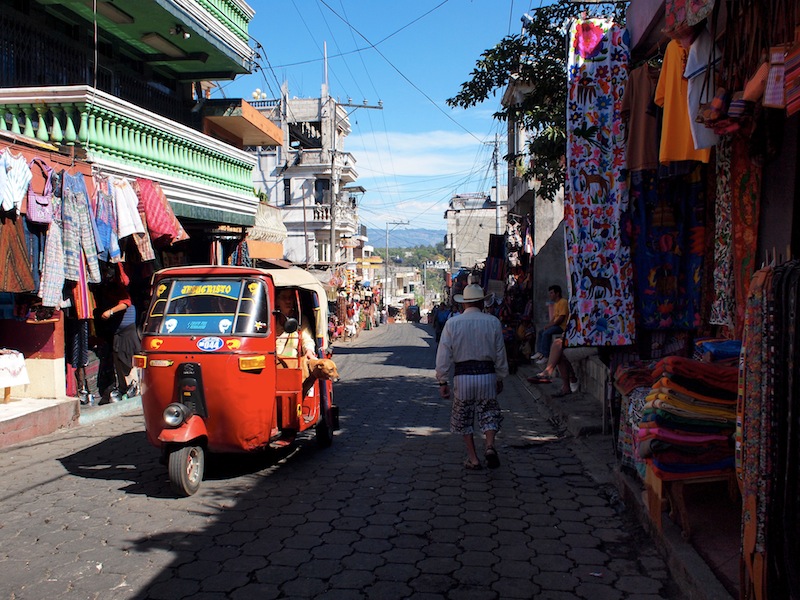 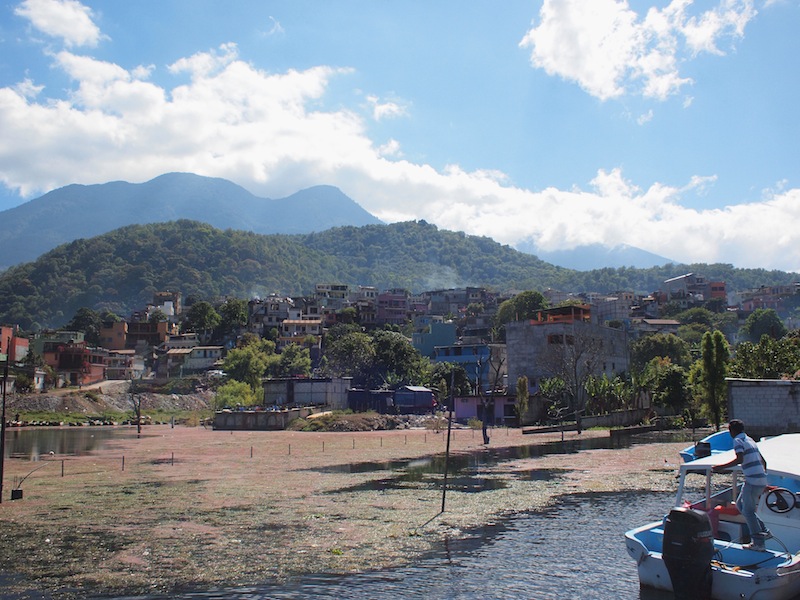 Santiago Atitlán viewed from the dock 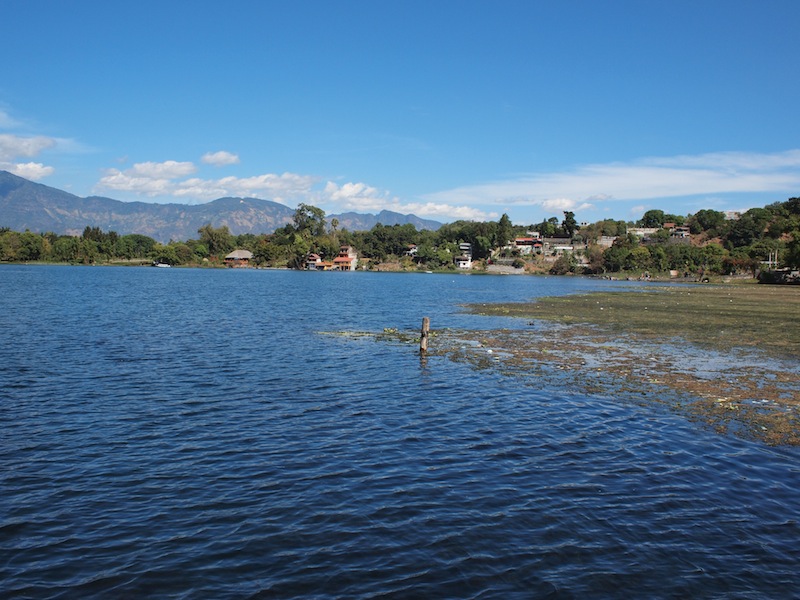 Having meandered its streets for a good while, we took a “lancha” (25 GTQ/2.3 EUR pp) back to Panajachel, safely guarded from Xocomil’s wrath and still thinking of the lovely drive across the base of the Tolimán volcano. 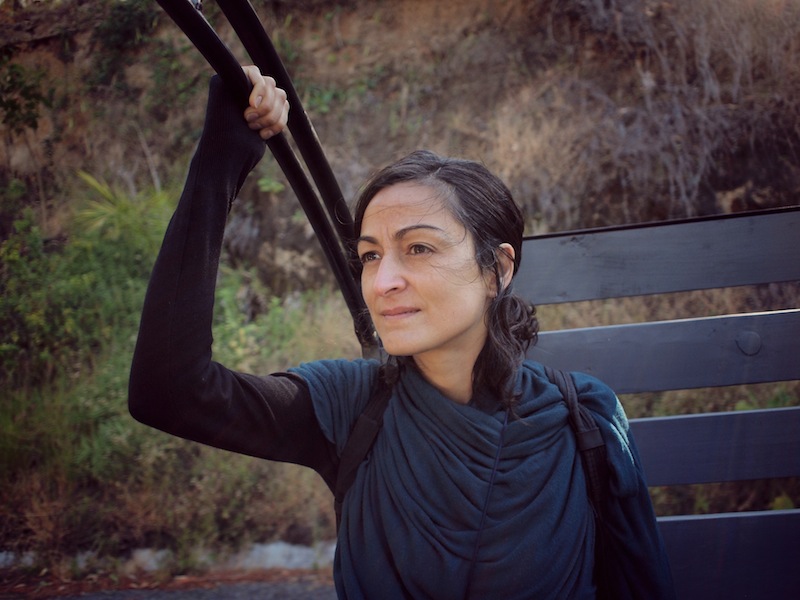 Elle on a pickup

There are many “lanchas” providing access to the villages around Lake Atitlán. While some take a direct route to one of the bigger villages, others function more like a bus on water, making stops whenever an arm is waved along the shore.

After taking a direct “lancha” from Panajachel to San Pedro La Laguna on a previous journey, this time we took the long way out, navigating the lake’s waters at a slower speed and with a less demanding schedule.

Since we had already visited some of the towns along our way, we decided to stick to a more cruise-like experience, watching several towns go by as we docked and departed like a hummingbird gathering nectar in slow-motion. 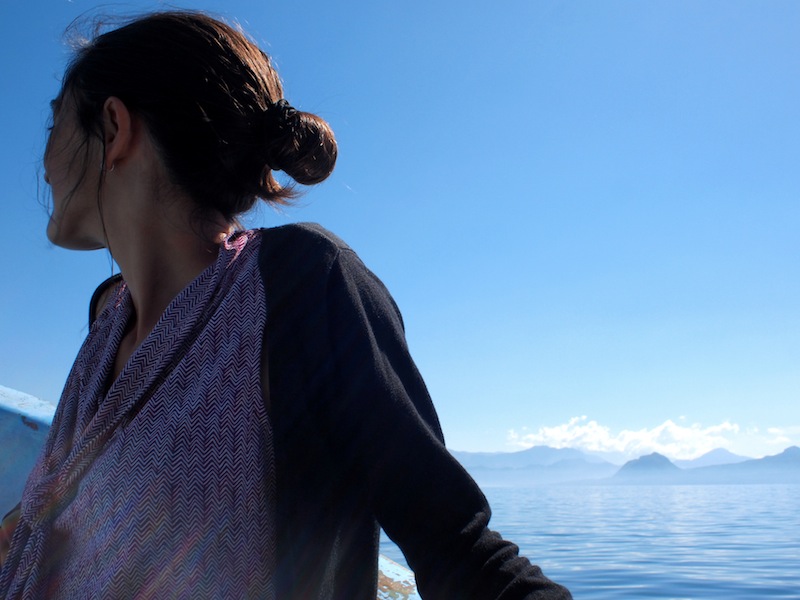 This itinerary is a good way to get a sense of the western side of the lake, particularly for those on a short stay. If leaving in the early morning, it’s possible to disembark on any village of choice, wander around for a while and then return to the dock in time for the next boat.

Making our way from the dock at the end of Calle del Embarcadero in Panajachel, our first stop was Santa Cruz La Laguna, one of the less developed towns ringing Lake Atitlán and only accessible by boat of footpath. 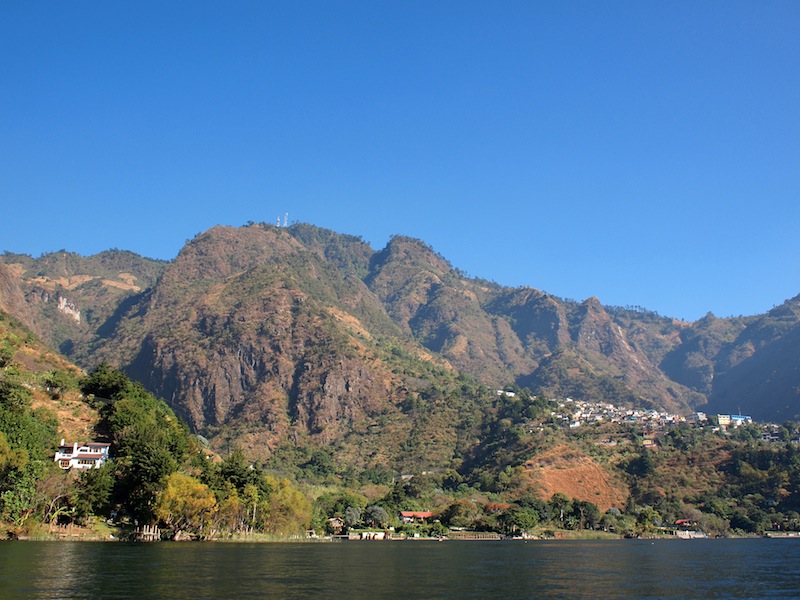 Next stop was Tzununá, even smaller than Santa Cruz and also less visited. 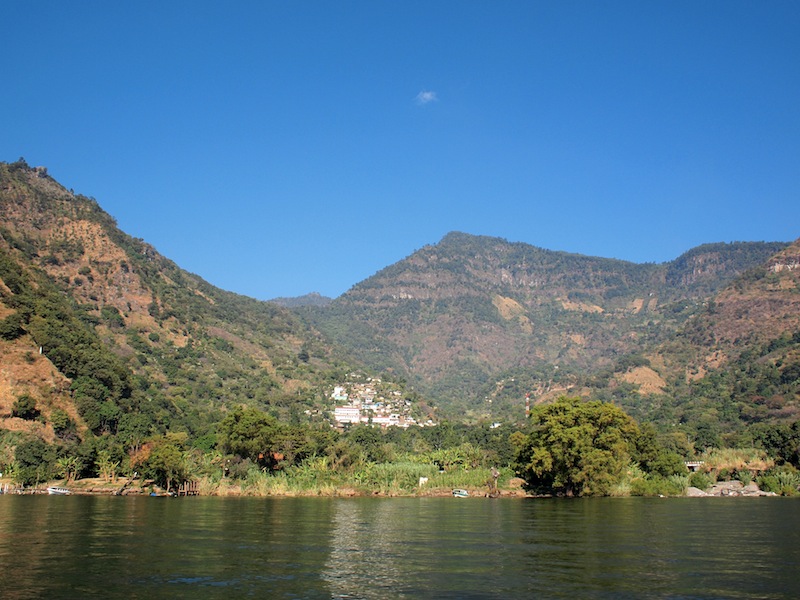 The holistic haven of San Marcos La Laguna comes shortly afterwards, and is much neater than the previous towns. Although quieter than Panajachel or San Pedro, San Marcos has plenty of natural entertainment and is well equipped to deal with casual tourists. 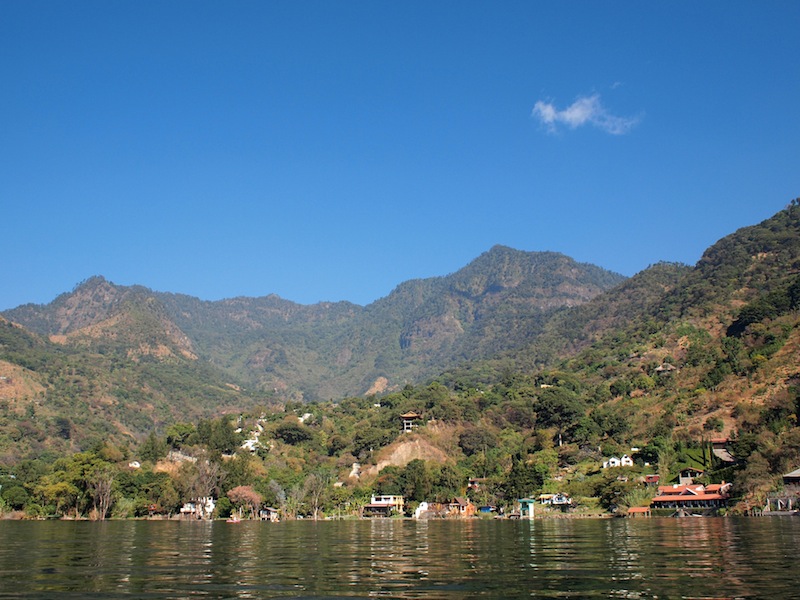 Once one’s aura is realigned (or whatever they do to auras), it’s time to proceed to San Pablo La Laguna, which is one of the smallest municipalities of Guatemala. Its people belong to the Tz’utujil Maya ethnic group, and are mostly devoted to agriculture and handicrafts. 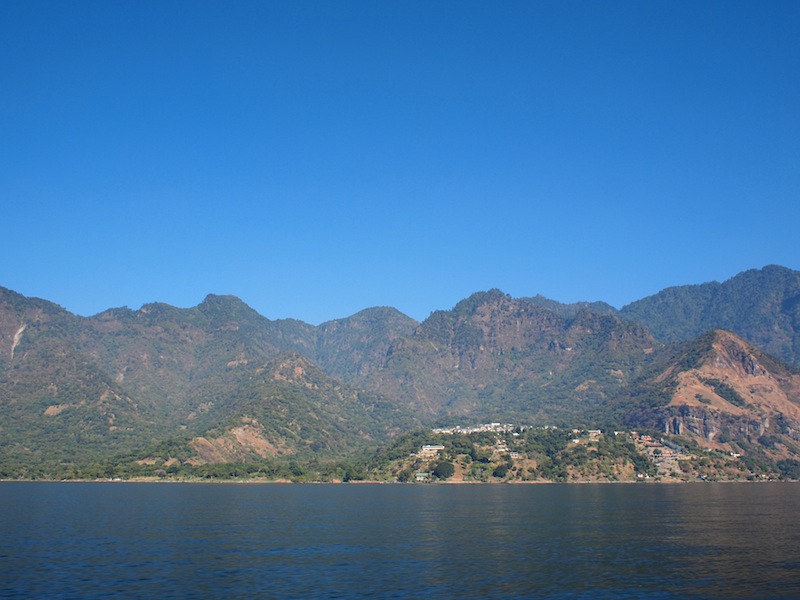 One of the most striking aspects of a slow journey along the shores of Lake Atitlán is the continuous sighting of magnificent houses sprouting from unexpected corners. Although most are merely picturesque, others seem obvious choices for the villain’s headquarters in the next James Bond movie. 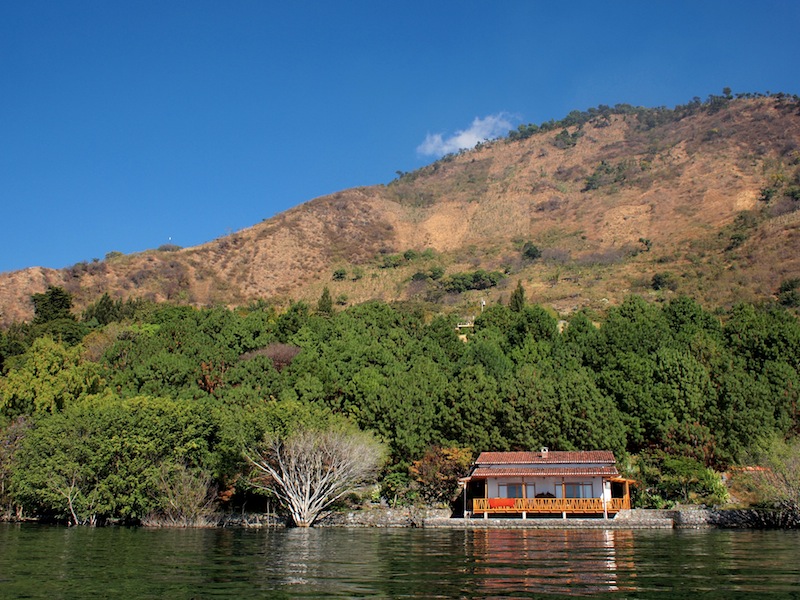 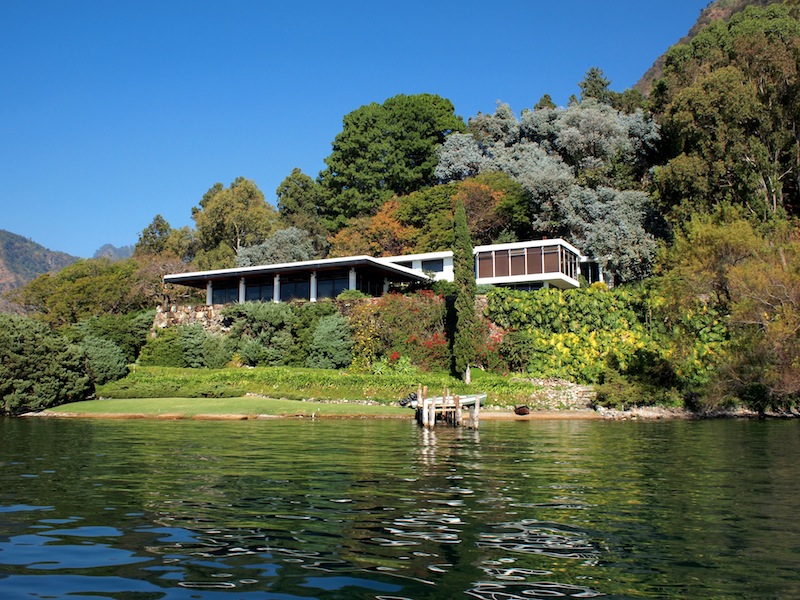 The evil lair of a James Bond villain

The town of San Juan La Laguna is gaining some momentum, mainly due to its proximity to San Pedro and the many backpackers who call it home (or party venue). San Juan has a national park with trails and lookouts, while its streets hold a few stores selling textiles woven by local women. 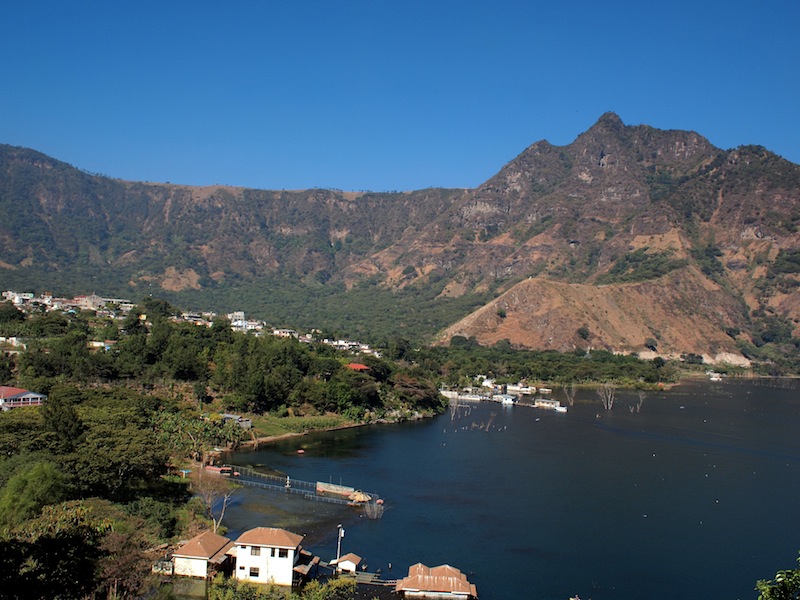 In order to appreciate the views of both San Juan and San Pedro from higher ground, we left our “lancha” in San Juan’s dock. The 2km distance between the two villages can be done on foot or by tuk-tuk (5 GTQ/0.5 EUR pp).

Since San Pedro La Laguna has more reliable departures towards Panajachel, it makes practical sense to leave it as a final stop. If still in the mood for adventure after a relaxing boat ride along Lake Atitlán, there’s always the option of climbing the San Pedro volcano. If not, wallow in the bohemian vibe and either join the merrymakers or escape to one of the town’s many peaceful retreats, usually found away from the lakeshore. 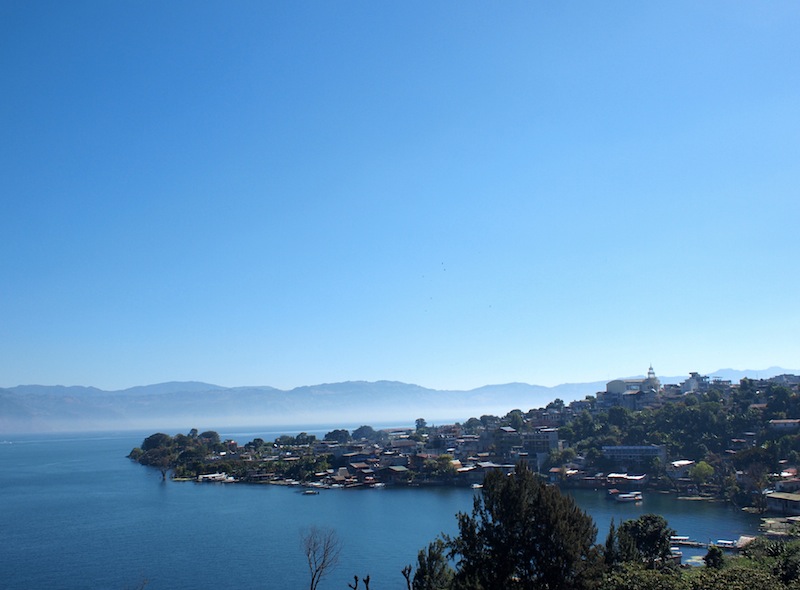 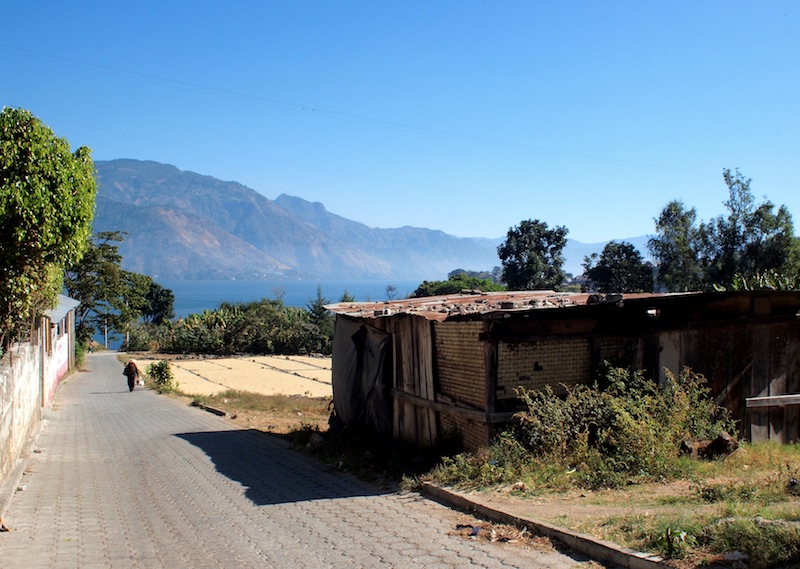 Summing up, our two itineraries provide very different experiences but have their own merits. The big draw of the trip through the eastern side of the lake is the great drive between San Lucas Tolimán and Santiago Atitlán, which remains largely undiscovered. On the other hand, the trip through the western side of Lake Atitlán is a more aquatic affair, and provides an easy way to explore many less-visited villages.

Whatever the choice, and even if it’s ultimately neither of them, the shimmering beauty of Lake Atitlán remains undiminished and undisputed. 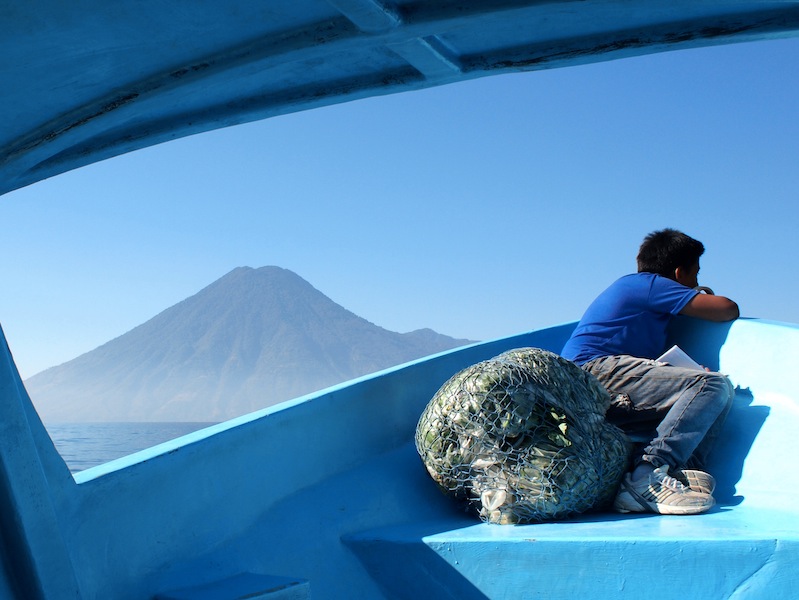