Bartolo was asking us if we were married. Glancing over to Elle, acknowledging a common question, I noticed a patch of yellow nearing her head, silent and slow, almost imperceptible amidst the dark brown wooden walls of the makeshift hut we were sharing while escaping the heavy rain. My heart then skipped a beat, as I recognized the large mass of rigid brown between yellow claw and stinger, radiating menace.

Most travelers arrive in San Cristóbal de las Casas on a ADO night bus. They come from tourist draws such as Oaxaca, Puerto Escondido, Cancun or anywhere else in Mexico where backpackers tread. The journey is usually long and tedious, particularly for insomniacs, who are left looking at flickering screens or the vast darkness of the Mexican highways.

Enjoying the sun in Mazunte, we decided to break our journey to San Cristobál de las Casas into a couple of stages, in order to see the changing landscape and experience the road less traveled. We would spend a night in Bahias de Huatulco and another in Juchitán de Zaragoza, finally arriving in San Cristóbal three days later.

From Mazunte to Bahias de Huatulco, we took first a “colectivo” to Pochutla and later a “chicken bus” to Bahia Chahué, one of the nine bays of Huatulco. The “colectivo” cost 10 MXN/0.5 EUR pp, and dropped us off at a crossroads where various buses drive through on their way to Huatulco. The “chicken bus”, familiarly derelict, then took us all the way to our final destination. The entire trip took a little over an hour. From the bus terminal, we finally hailed a taxi (25 MXN/1.4 EUR) to Bahia Chahué, where our friendly hotel (Plaza Delphinus) was situated.

We unloaded our backpacks in the early afternoon. The weather had turned somber, but we still set out to get a feel of the famed Bahias de Huatulco. Admittedly, it’s a strange place. We were greeted by large boulevards lined with palm trees, lofty hotels, fancy jewelry shops and a plethora of expensive-looking restaurants. Visibly lacking, alas, were the tourists. Granted, it was low season, but one had the sense of being in the middle of a failed attempt to recreate Cancun.

Notwithstanding, we had a specific goal to reach. Our main purpose was to visit Bahia de Cacaluta, where Alfonso Cuarón had filmed the final beach scenes of his gorgeous film Y Tu Mamá También.

We inquired how to get there, and were advised by a kind local to take a taxi to the guarded entrance and then walk the remaining 1.5 km to the secluded beach. It can also be reached by boat, but the prices were ridiculous and we were pressed for time. Plus, the wind was becoming stronger and the clouds were looming larger and darker. Following previous experiences with angry seas, we opted not to risk it.

Hence, we took a stupidly expensive taxi (60 MXN/3.4 EUR), which left us at a gated entrance where a lone Mexican kept watch inside a wooden hut. Since the place was deserted and quite distant from civilization, the taxi driver agreed to pick us up in three hours. Looking at the clouds gathering above, I really hoped he would make it.

He helpfully explained there were two trails: a shorter one, which would take 20 minutes, and the longer one we had been told about in town, which usually took one hour to complete each way. We obviously leaned towards the easy one, but after a quick check we discovered it was nearly covered in lush vegetation, amongst which blossomed the dreaded poison ivy.

And that’s how we found ourselves in front of a rusty gate, glancing anxiously at the impeding rain above and the shadows lurking ahead. Onwards we went, into the green unknown.

The winding path is undoubtedly ominous under grey weather. Fallen branches lay scattered on the ground, while the silence was constantly interrupted by hurried shuffling of unseen feet and sudden crackling of wood. At times, we reached a crossroads, usually empty of signage. Going on my decidedly pathetic sense of direction, I was apprehensive of the outcome of our little expedition. 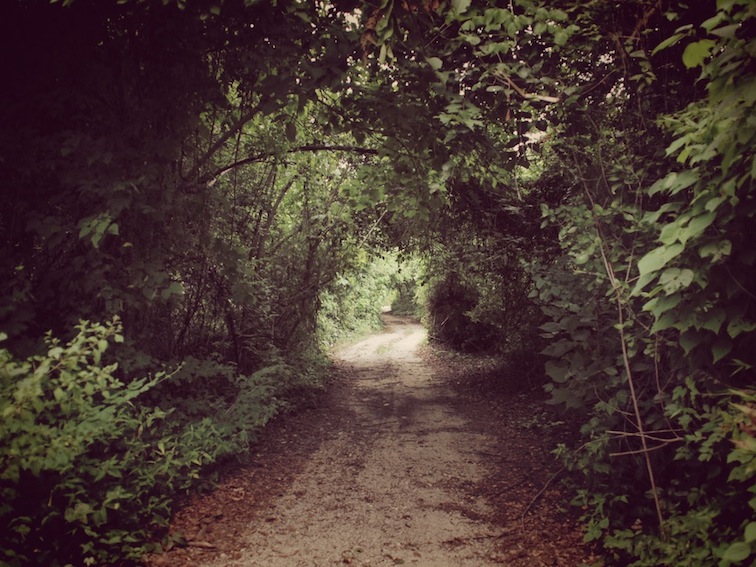 But lo and behold, the dirt road became suffused with sand and the green finally opened up to let the rain lash freely at my childish grin, as I recognized Isla Cacaluta rising ahead.

Cacaluta beach is savagely beautiful. I’ll leave it at that. 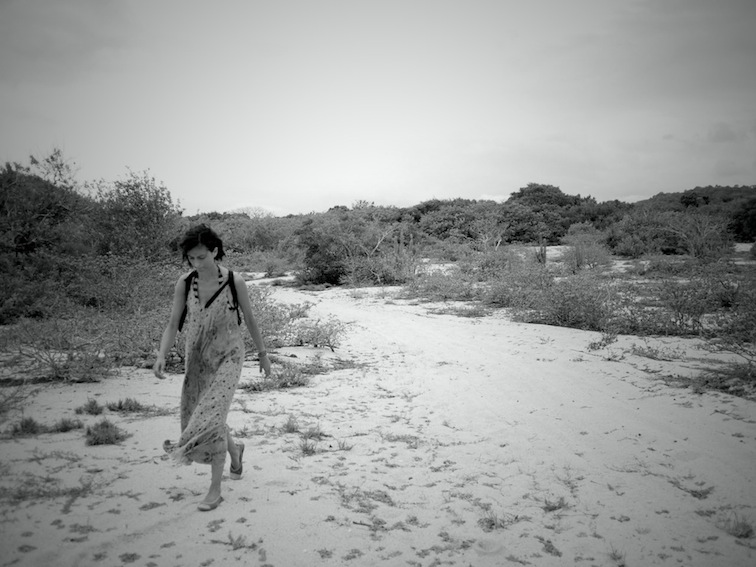 Elle in the sand 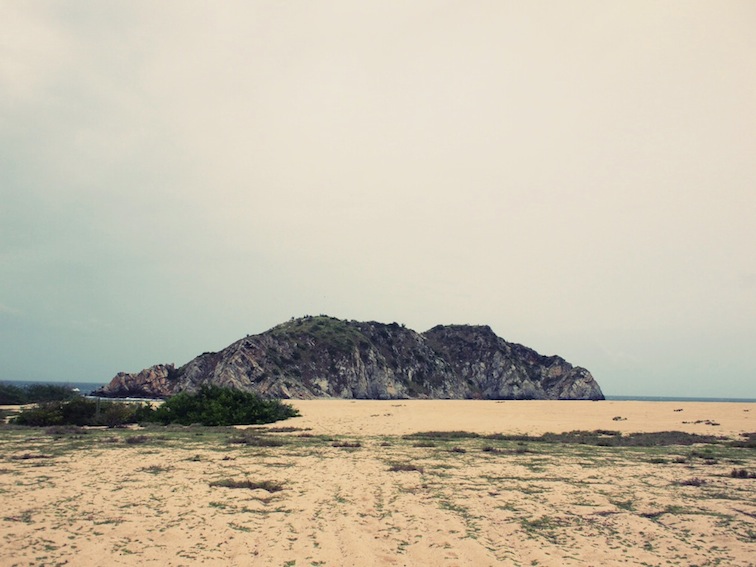 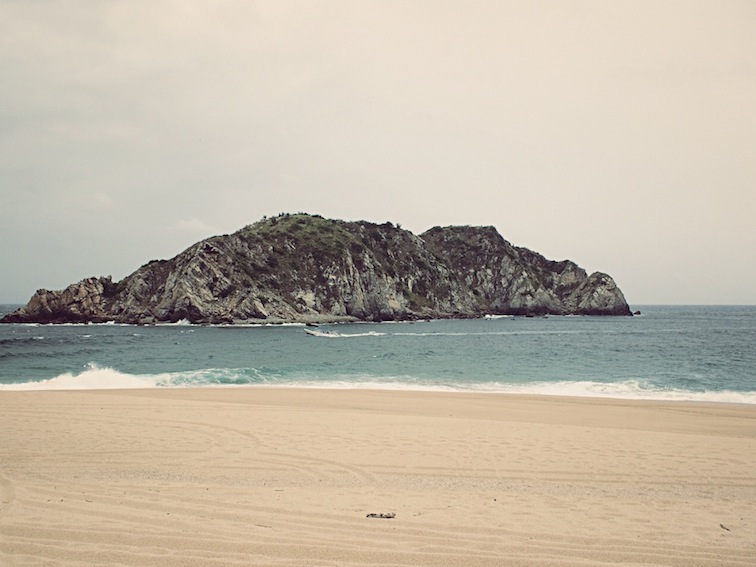 On the way back, we were attacked by an overly territorial dog, but the rest of the trip went without further incident. The only reason for concern was the increasingly hard rain. Luckily, most of the trail was protected by an exuberant canopy, which meant we were reasonably dry by the time we reached the entry gate. Alas, after a quick glance at the time, we realized we had done the entire journey in an hour. Our taxi would hopefully pick us up in two hours time. Oy vey…

Now, a quick detour: as we document our long-term voyage through the Americas, we try to provide a brief introduction to the places we visit and gather rough portraits of some of the people we meet along the way. Obviously, we are aided not only by the written word but also by photos and the occasional video. Nonetheless, there are plenty of times when our cameras are tucked away, allowing us to enjoy a moment undisturbed by technological clutter. Some we write about here, others will be ingrained only in our memories, to linger or to disappear with the passing of time.

We huddled under a tree by the trail’s entrance. Upon arrival, we had noticed a Mexican youth apparently in charge of a little ragtag hut of wood and zinc. Now, he was nowhere to be seen. After a brief period, during which the rain kept hitting harder, he made an appearance, shyly exiting his shelter. We exchanged smiles and continued our wait. Shortly though, stories were being exchanged.

His name was Bartolo. He was 23 and guarded the main entrance to Cacaluta. His role was to prevent weekend 4-wheelers, or any other unregistered vehicle, to run amok amidst the dunes and nearby bays of Bahias de Huatulco National Park. He had a girlfriend but lived with his parents, who were farmers in a neighboring village. Although interested in pursuing a university degree, his socioeconomic background prevented him from doing so. When asked about his hypothetical choice of studies, he replied Medicine.

There is no romance in poverty.

As the minutes ticked to the sound of pouring rain, he invited us to share the protection of his hut, scrambling a couple of plastic chairs to accommodate our wet bodies. The conversation continued, shifting between tales of his life and our own stories. We told him about our travels and tried to explain the cost of living in Europe. His eyes widened when we reported an average rent in an European capital city, or the price of a flight to Mexico, but he guffawed in disbelief when we told him all our clothes were at least five years old.

Our topics ranged from football to foreign languages, until we approached more intimate matters, such as the question of marriage. It was after he told us of his delayed plans to marry (he needed a house first), and subsequently asked of our marital status, that I saw it – the prickly beast, moving across the wall.

I gently nudged Elle’s head forward, whispering “alacrán” (scorpion) to Bartolo, who rose quietly, grabbing a machete with his right hand. As we also rose and moved back to let Bartolo’s blade through, I had a proper look at the scorpion. We had seen a small, almost translucent one in Puerto Escondido, but the one in front of us was a whole other animal – dark, dangerous and the size of my head. Bartolo tried to kill it but, cautious not to let it fall on the floor, missed his shot, and we could only watch as the scorpion hid safely under a thin gap in the wood.

We sat once more, resigned to the probable gaze of the scorpion, and continued our talk. An hour later, our taxi arrived. We thanked Bartolo for his hospitality, wished him good luck and said goodbye.

I have no evidence of this episode. During the two hours we stood and then sat in friendly chatter, or even when our surprise guest appeared, I never thought of reaching for the camera. Although ephemeral and undocumented, or maybe because of it, those hours of exchanging stories with a stranger on the other side of the world remain an example of why we travel.

The following morning, we walked to the ADO bus station, where we departed to Juchitán de Zaragoza on a SUR bus (107 MXN/6.2 EUR pp), which was comfortable enough for a 3.5 hour drive.

Juchitán is an indigenous town located on the Isthmus of Tehuantepec. Its inhabitants are mostly Zapotec and Huaves. Apart from a long history of revolt and fiery independence, the town is known in Mexico as a haven for progressive politics. Furthermore, Juchitán was the subject of some controversy when an article on Elle magazine named it “The Last Matriarchy”. Women are not the rulers of Juchitán, but they are the carriers of cultural traditions, and seem to have achieved a more respected status than in other areas of the world. Juchitán has also been traditionally tolerant of alternative gender roles. 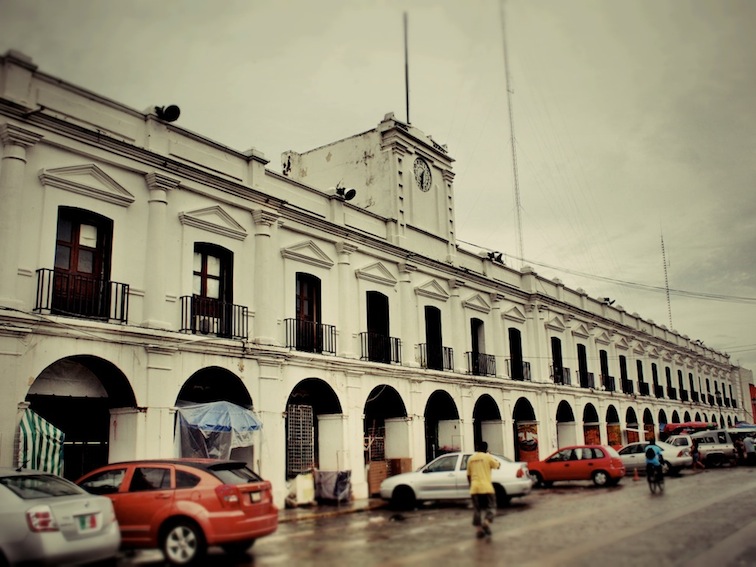 We did not spend enough time in Juchitán to explore its cultural mores in any meaningful way, but tried nonetheless to take the pulse of its colorfully beating heart. Walking by the City Hall, we saw familiar feminine faces selling their wares, taking care of business.

Once again, we found street food shacks to be great places to taste local culture. We had some delicious tortas, and after an evening stroll through town we returned to our Hotel Central, which was not only charming but also true to its name. On our way, I noticed the Simone de Beauvoir Primary School. It made me smile, this hint of a feminist sanctuary. 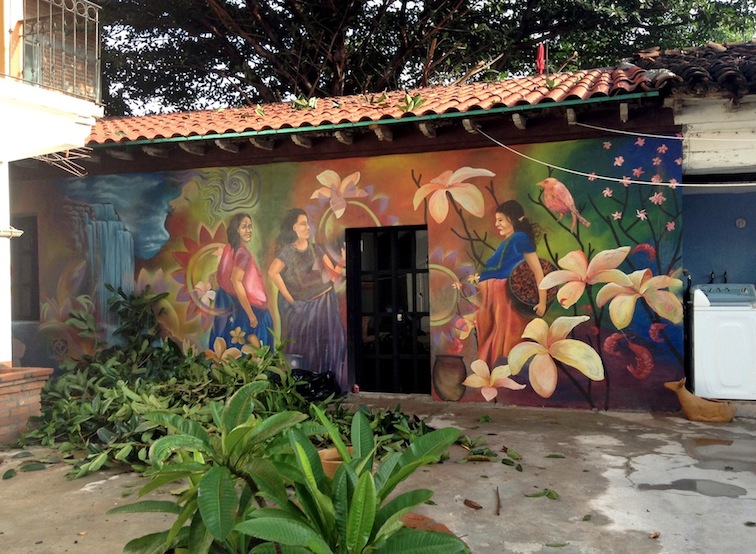 The following day, we finally made our last push towards San Cristóbal de las Casas. We took an ADO bus to Tuxtla Gutierrez (214 MXN/12.4 EUR pp), capital of the state of Chiapas, and later another ADO to San Cristóbal (40 MXN/2.3 EUR pp). The entire trip took approximately 6 hours. We greatly enjoyed watching the landscape change, becoming more luscious as we climbed the mountains, crossing lakes and valleys absent of maguey – an obvious sign we had left the glorious state of Oaxaca and were now entering a new stage of our Mexican adventure… 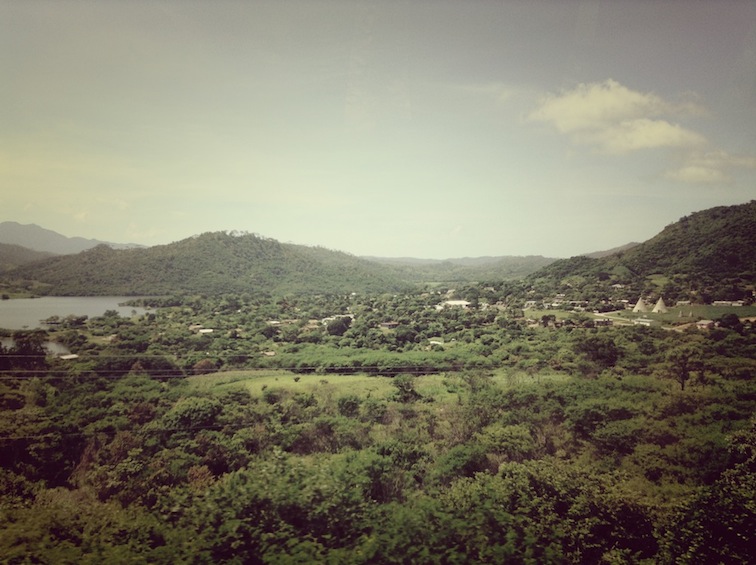 On our way to Tuxtla Gutierrez