Lanzarote and Fuerteventura, Africa and the Atlantic

Struggling once again with an extended Northern European Winter, we pondered several cheap options for a week under the sun. Following pleasant experiences in Sardinia and Santorini, we opted for yet another (relatively) short haul to an European destination. Leaving the Mediterranean, we now had our eyes and passports set on 2 volcanic islands rising between Africa and the Atlantic Ocean: Lanzarote and Fuerteventura.

As our plane approached Lanzarote, we saw the blue of the sea turn into the island’s deep rugged red. The landscape was mostly arid and mountainous, with spots of dark green and a few scattered towns bathed in white. Leaving the plane, we were greeted by a scorching sun and strong gusts of hot wind. Welcome to Mars, we thought.

As our base in Lanzarote we chose its capital, Arrecife. Being in essence a small seaside town, there is not much to differentiate it from a number of other places in the Canary Islands or even mainland Southern Europe. Hence, although charming enough to  warrant a few nighttime walks in the town’s tourist center, we would spend more time wandering the remote corners of the island. 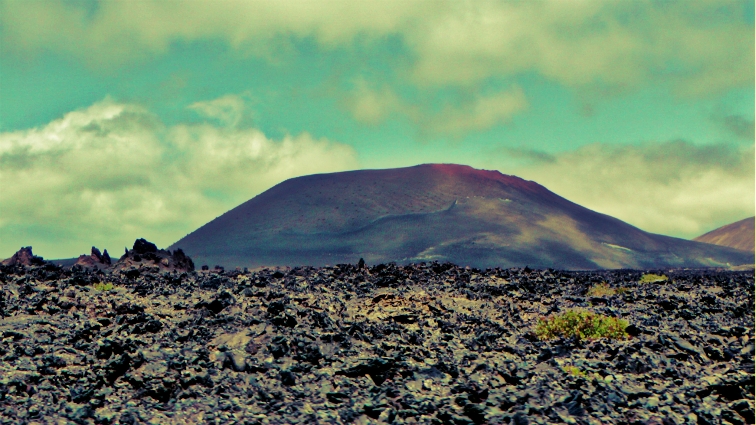 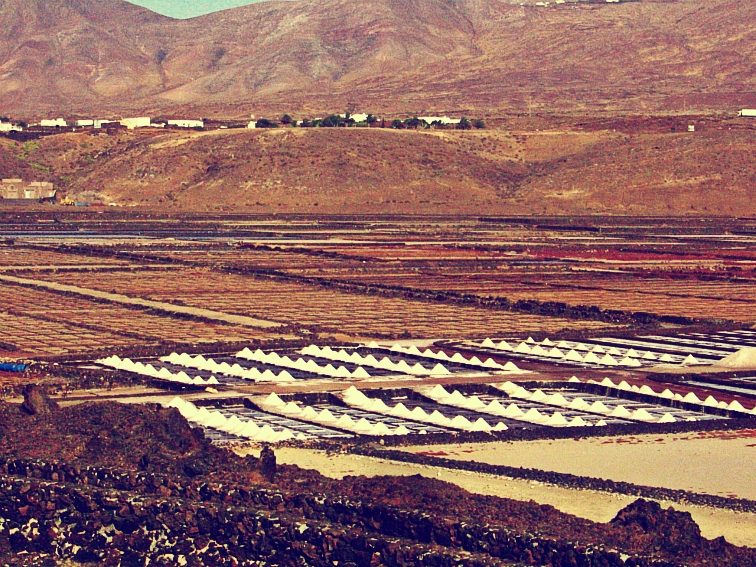 In order to do so with some level of independence, we rented a car. Following an evening getting our bodies re-acquainted with sweltering heat, we left the next morning towards the Mirador del Rio, on the northernmost tip of Lanzarote. Its claim to notoriety stems mostly from the panoramic views it offers of the island of La Graciosa. Alas, we’ll have to take everybody’s word for it, since the entire Mirador was clouded in thick mist during our visit.

Not letting that slight setback dampen our spirits (because of the mist – get it?), we  journeyed south to Teguise, for a quick stroll and a fresh drink, and then to the windswept Playa de Famara. The beach is a windsurfer’s paradise and a casual bather’s nightmare. Aided by relentless gusts of wind, the sea continuously turns into a shapeshifting creature with unpredictable behavior. 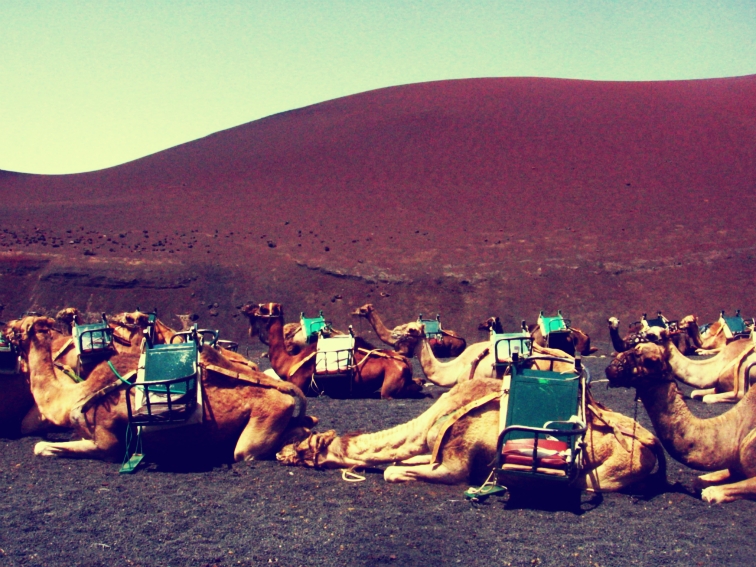 The dromedaries at Timanfaya National Park

Deciding we would like to live another day, we set out for Lanzarote’s iconic landmark, Timanfaya National Park. From 1730 to 1736, the island was overcome by constant volcanic eruptions, which spawned 32 new volcanoes. A large part of the island’s surface was permanently covered in lava, essentially destroying large swaths of precious fertile ground. The area of Timanfaya is today almost unchanged from those violent days. The landscape is almost alien, with the Montañas del Fuego rising like red devils amidst a sea of black open craters. 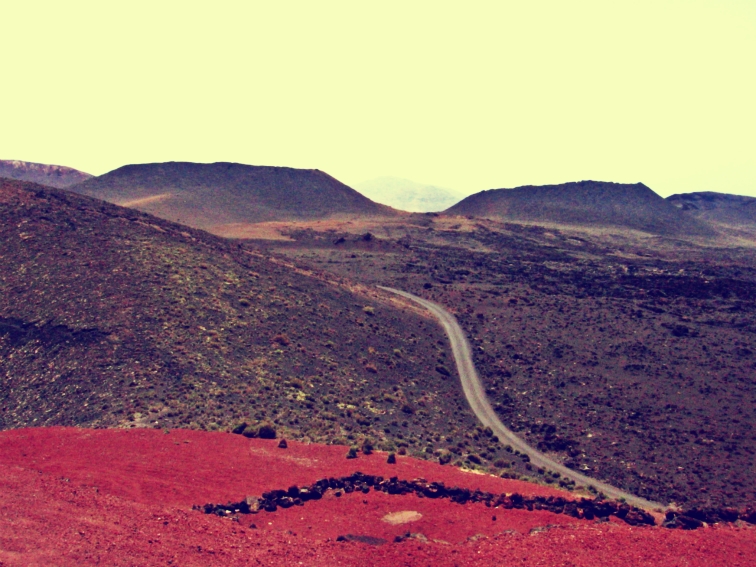 After a day marveling at the remnants of Lanzarote’s fiery nature and its impact on the island’s scarred surface, we spent our evening inside the collapsed underground lava tunnel of Jameos del Agua. After exploring the lava tube of Cueva de los Verdes close by, we entered Jameos del Agua. Adding to this volcanic formation’s natural beauty are a few modern structures, such as a concert hall and a restaurant designed by César Manrique, the island’s most renowned native son.

The remainder of our sojourn in Lanzarote was devoted to basking under the sun in Playa de Papagayo, making short excursions to Puerto del Carmen for supplies (the island’s most popular tourist destination, aka Little Britain), and meandering about whenever the sun burnt a tad too brightly. 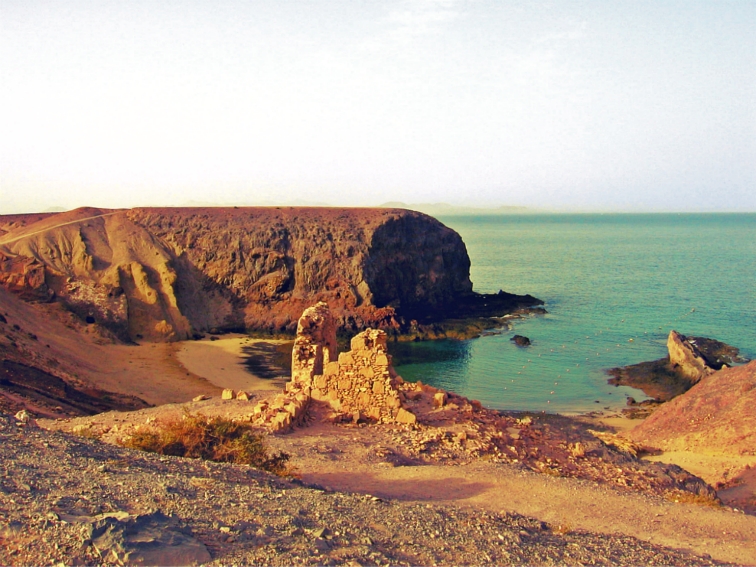 Some highlights of our daily escapes from the midday sun were the Salinas de Janubio, the vineyards of La Gería, the deranged colors of the crater and laguna of El Golfo and a small bar in Playa Quemada serving the best tapas and most refreshing sangria we had during our stay.

After spending so much of our time near Playa Blanca, from where we drove each day through the mountains of Hacha Grande towards the secluded beaches of Papagayo, our hop to Fuerteventura went almost unnoticed. We took our car on the 30 minute ferry ride, and made camp at Corralejo, in the northern tip of the island. 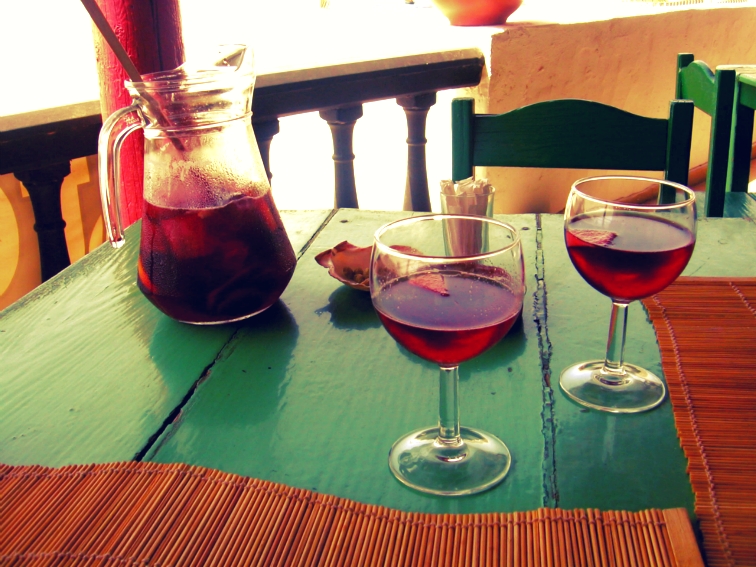 As in Lanzarote, the wind is a consistent presence in Fuerteventura. Albeit turning the entire island into a windsurfer’s dream-come-true, we were at times hard pressed to find a quiet beach where swimming would be an option instead of a tragedy waiting to happen. Eventually, we discovered a few protected beaches around El Cotillo, which became our favorite area for sun-soaked mornings and sea-dipped afternoons.

Albeit lacking the natural magnificence of places like Timanfaya and other famous tourist attractions, Fuerteventura seemed to us more charming than Lanzarote. We greatly enjoyed driving around between beaches, stopping in old towns like Antigua for a good meal and a cold drink, or exploring more remote locations like Cofete and Ajuy. 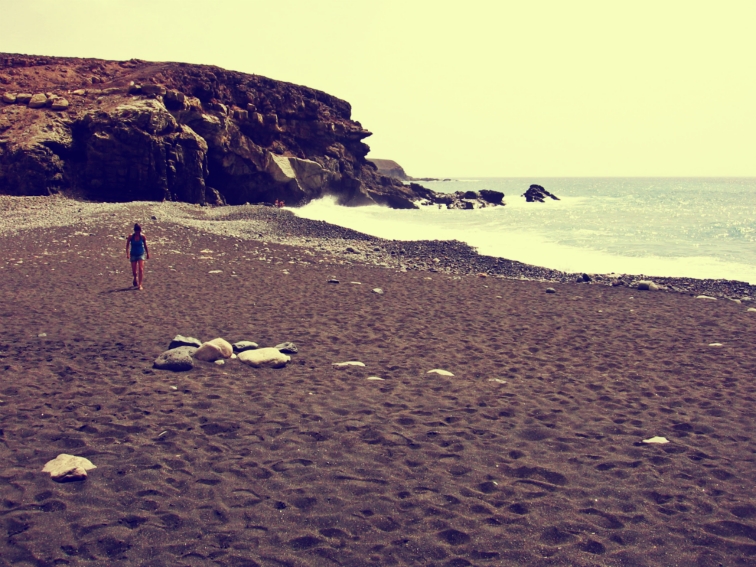 The black sands of Ajuy

It was between Antigua and the fishing town of Ajuy that we made one of our most memorable drives, as we climbed high mountains through winding asphalt, leading us through Betancuria and its resilient squirrels, munching on dust by the side of vertiginous roads.

The return trip from Ajuy was done through Pájara, and from there we embarked on a very bumpy drive to the isolated Playa de Garcey, mostly notorious for being the final resting place of the ocean liner SS American Star, whose wreck was unfortunately already swallowed by the ocean at the time we visited. 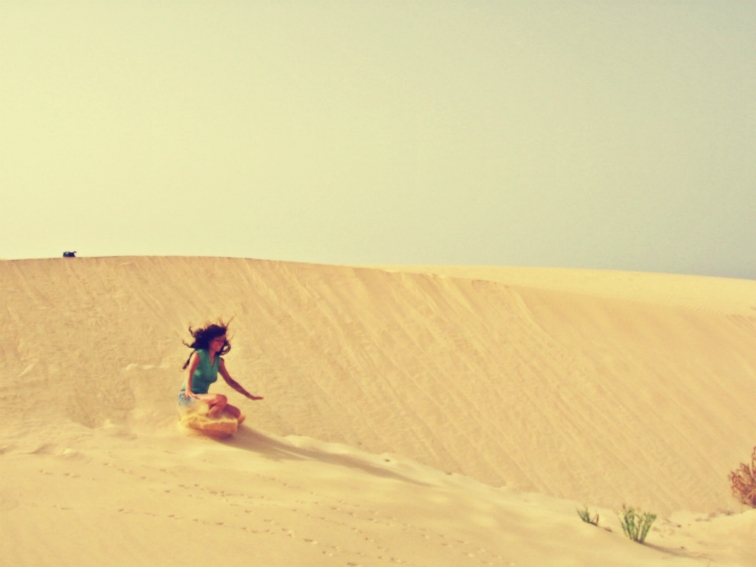 Back in the northeastern side of the island, we took a short trek through the Dunes of Corralejo, a popular activity with fellow tourists but one which proved to be a delightful experience. This coastal desert, stretching for 11 km, is accessible from the main road and features gorgeous views of Lobos Island and Lanzarote. However, during the occasional Calima, as a sandstorm blowing from the Sahara Desert is known, visibility drops to almost zero.

We ended our holiday back in Lanzarote, rested and warmed up for a few more months. Both Atlantic islands have plenty to offer, from the volcanic landscapes of Lanzarote, reminiscent of Mars or Iceland, to the sand dunes and secluded beaches of Fuerteventura. We chose Fuerteventura as our favorite, but it could have gone either way. They are remarkable places and deserve a visit, particularly if already in one of the more crowded Canary islands, such as Tenerife or Gran Canaria.