The Elusive Spirit of Montreal

After a charming train ride on the Amtrak Adirondack, we arrived in Montreal ready to go out and explore. Since it was already late in the afternoon, we busied ourselves keeping a lookout for our hotel’s whereabouts. We stayed at the Hotel des Arts, a cheap and practical option only a short uphill walk from Saint Laurent subway station.

First impressions were a tad underwhelming. The hotel itself was fine, but the surroundings were not exactly conducive to picture postcards. It’s a somewhat shoddy area, and at first glance we thought we would be spending a lot of our time running out to other, more picturesque neighborhoods. 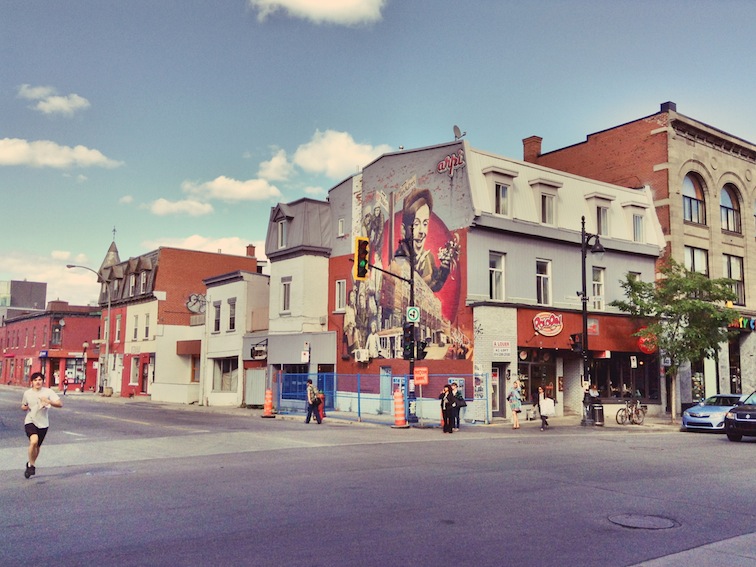 We spent our first evening wandering through downtown, around McGill University. The area is suffused with skyscrapers, fancy shops and fast food joints, while also dotted with a couple of seemingly out-of-place cathedrals. Although not unpleasant, it looks pretty much like any other bustling city center.

The following day, our first impression was apparently confirmed. The morning sun had not shone a miraculous new light on Rue Saint Dominique, where our hotel was located. Nonetheless, Old Montreal was a relatively short hop away, so we set out downhill towards the Old Port and the cobblestone streets leading to the Notre-Dame Basilica. Once there, we ambled through the Bonsecours Market and made a quick escape at the first few jangled notes emanating from the street musicians at Place Jacques-Cartier. 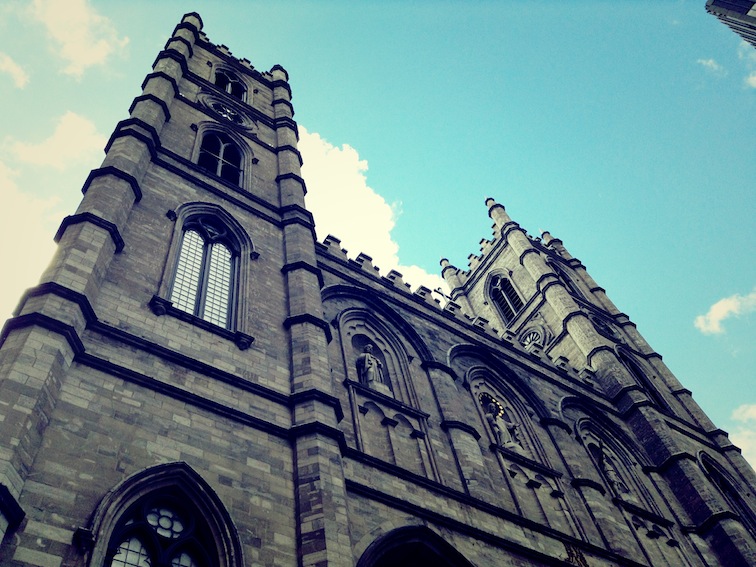 As we left the street performers behind, we stumbled upon a movie set, where a crowd of extras dressed in 1970’s garb stood expectant in front of a spraying fountain, ready for their next scene. After being warned not to take any pictures of the classic cars lining one side of the street (but they were so photogenic!), we continued in search of the until now elusive feel of Montreal, or something of the sort.

Finding ourselves in the pedestrianized Quartier des Spectacles, famous for hosting the notorious Montreal Jazz Festival, we proceeded towards Chinatown and its Middle Kingdom boutiques. For the first time, we felt we were on to something. Perhaps it was not what we expected to find in Montreal, but we greatly enjoyed walking the narrow streets and sweet smelling restaurants of Chinatown. Being on a tight budget, we also made note of some seemingly delicious and quite cheap meal options. 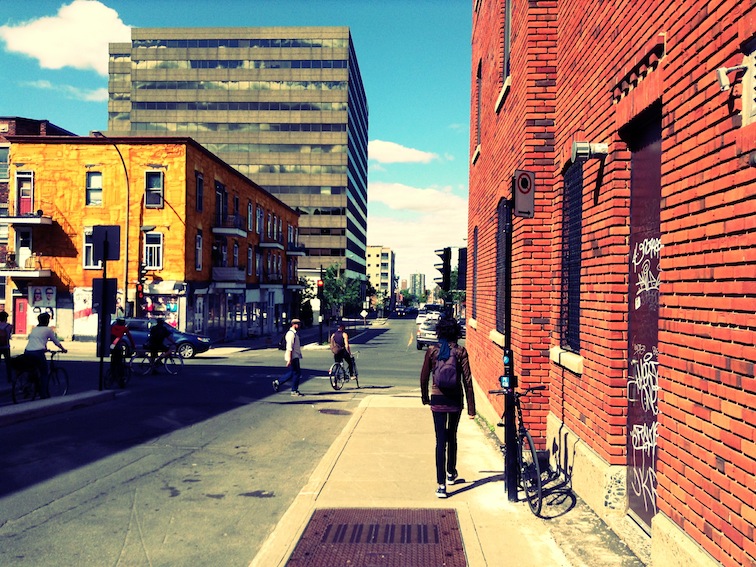 Walking the streets of Montreal

But where was French Montreal? Somewhat dispirited, we headed back to our hotel. One block before Rue Saint Dominique, we swerved left and took to the hills following Boulevard Saint-Laurent. Antique shops and ramshackle boutiques began sprouting along the way, reflected by a vibrant sun. The smell of French fries permeated the air, guiding us to the green shades of Jeanne-Mance Park and glimpses of the Église Saint-Jean-Baptiste and the Plateau. 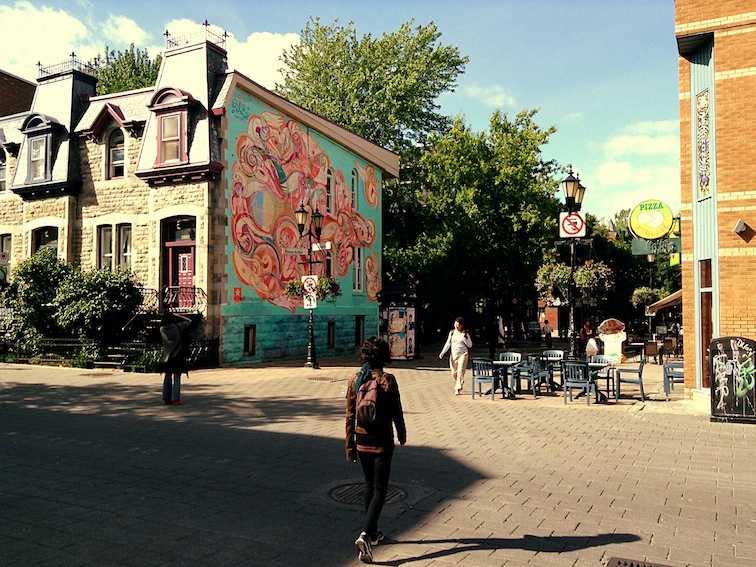 Meandering through quaint Rue Prince-Arthur we ended up at Square Saint-Louis, bordered by Victorian row houses with brightly colored roofs. Montreal suddenly became a lovely and lively city to get lost in. We zigzagged between alternative art spaces, bagel stores and historic mansions, gently swayed by the afternoon breeze and the impromptu discovery of a city opening itself up to us. 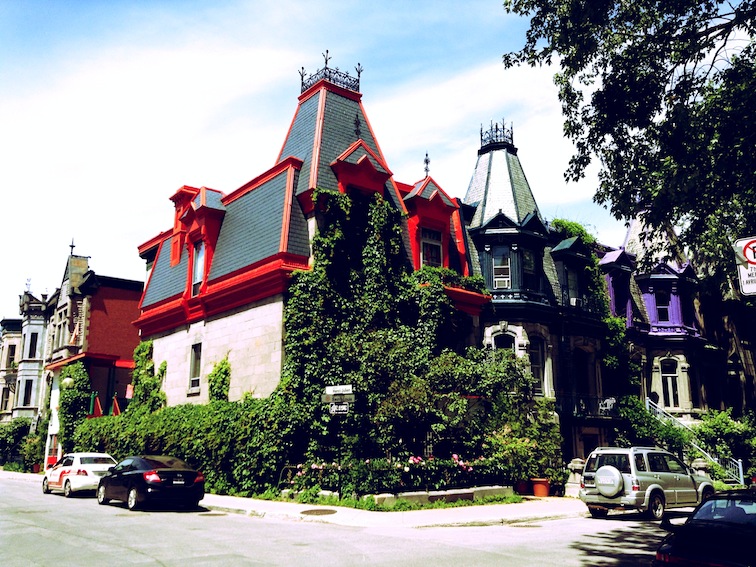 Back on Jeanne-Mance Park, we headed past volleyball courts and into the rising monoliths of Quartier Milton-Parc. Suddenly immersed in a city center, we noticed a block of chalkboard dedicated to Boris Vian’s beautiful poem “Je voudrais pas crever”, where passersby could note down in colored chalk what they would like to do before they died. FYI, I’d like to have wings.

Under a cerulean sky, we became enamored of Montreal and its mixture of old and new, grounded and poetic. We eventually made our way back to Chinatown, where we had a delicious, mineral-filled meal, in an atmosphere reminiscent of our days in Hong Kong. For dessert, we opted for some finely threaded Dragon Beard Candy, courtesy of cultural icon Johnny Chin. If ever in Montreal and with a sweet tooth, look him up.

Montreal is a walkable city. We did most of our sightseeing on foot, with the occasional dip into the straightforward metro system whenever we found ourselves too far out of our base. On one such trip, meeting an old friend, we left Station Lionel-Groulx and visited the Atwater Market, brimming with fruit and vegetable stands and whatever else a human needs to sustain life.

It was then a lovely walk along the canal to St-Ambroise Terrace, where we would be having our little reunion. St-Ambroise street has a much more industrial feel than the canal side, but it boasts a gargantuan ghost of a building standing skeletal yet mesmerizing. 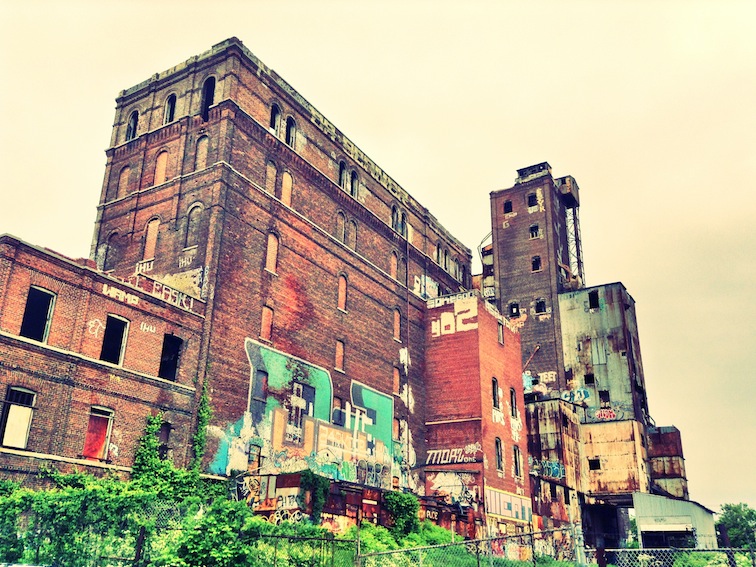 St-Ambroise terrace is a relaxed place to be. The crowd was comprised of mostly working-class heroes and old hippies, some playing folk songs but all of them drinking beer, of which they have a good and tasty selection. On our friend’s recommendation, we tried the apricot beer, and were quite pleased with the choice.

Our final evening was spent carousing through the Saint-Henri neighborhood, happy to be in Montreal, hopping into a bar where we ended up listening to a local rockabilly band shout out their early 60’s tunes. It would be a fitting end to our first foray into Canadian soil, torn between Francophone and Anglophone culture, in a city bristling with serendipitous corners and picturesque boulevards. 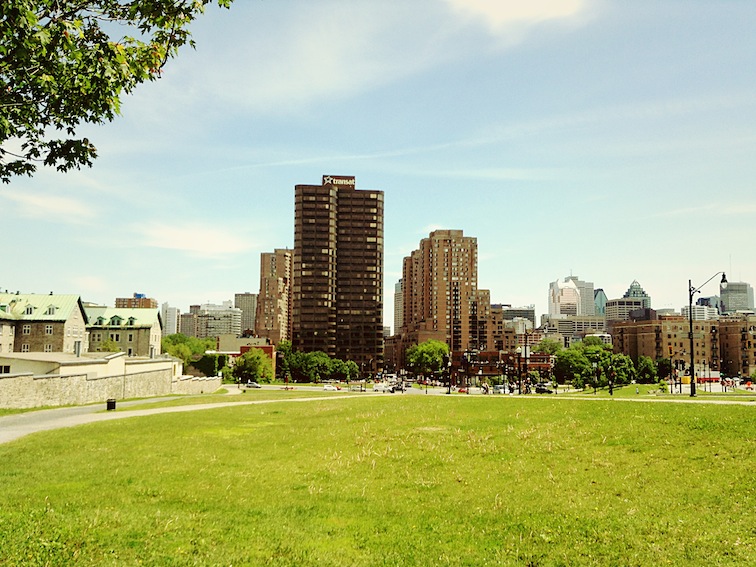