Following a few days meandering through Panajachel, we crossed Lake Atitlán to visit San Pedro La Laguna, a small town under the shadows of the San Pedro volcano. Although mostly inhabited by Tz’utujil Mayas, an increasing number of expats and backpackers have made it the most renowned location by the shores of Lake Atitlán. 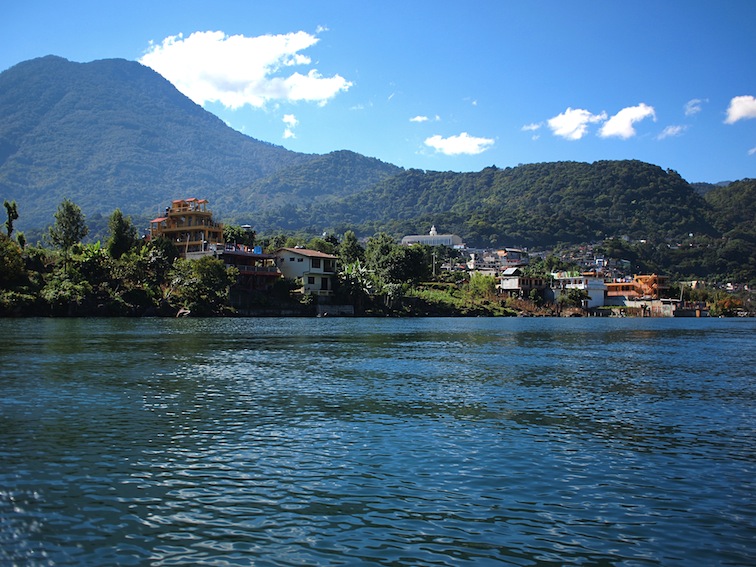 We arrived in San Pedro La Laguna by “lancha”, which takes between 30 and 45 minutes from Panajachel. These small boats cost 25 GTQ/2,5 EUR pp one way (they’re cheaper for locals) and depart not according to a specific schedule but whenever they have at least 12 people ready to go. It’s best not to be in a hurry, since we’ve had to wait at least 15 minutes before departing and returning. 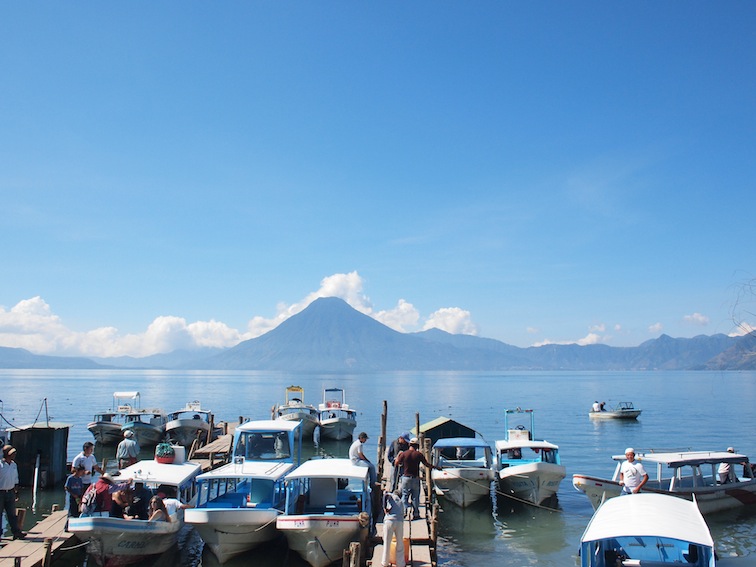 The ride itself is usually smooth in the morning but bumpier from midday onwards, particularly when the wind known as Xocomil decides to shake things up. Due to the wind’s effect on the waters close to San Pedro La Laguna, the last boat leaving town is at 15:00. If stuck in one of the many lively bars or dozing off at a hot tub and oblivious to the passing of time, there’s always a long and winding road back to Panajachel.

Volcanoes: Tolimán and Atitlán (left) and base of San Pedro

San Pedro La Laguna has endeared itself to tourists by its striking location at the base of the San Pedro Volcano, towering magnanimously at 3,020 meters, and by the vibrant collection of activities on offer, ranging from studying Spanish at one of the many language schools to learning (and buying) local crafts. 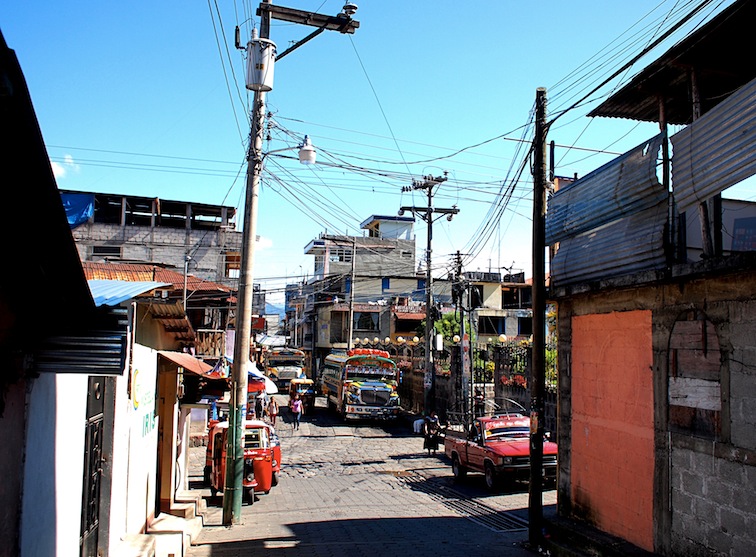 Nonetheless, the main pastime still seems to be idling about in one of the bars and ramshackle restaurants scattered throughout town, usually by the lake shore or tucked away in a shaded maze of streets plastered with graffiti and fliers advertising the next party or yoga session. 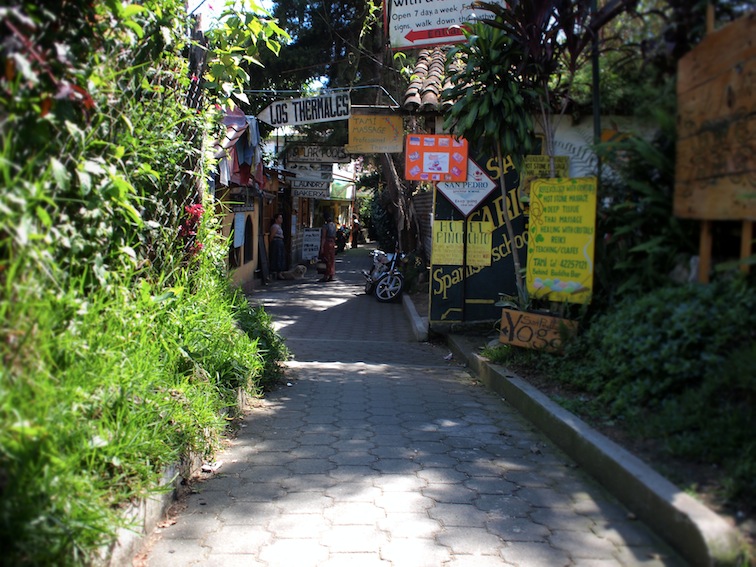 One inescapable figure in San Pedro La Laguna is Jesus, whose name can be found scribbled on walls, tuk tuks, banners and anywhere else deemed visible enough. Much like in parts of Mexico, the indigenous population still holds on to old religious traditions, but the God and prophets brought by the Spanish colonizers has gained a firm hold on the community’s spirits. Also as in Mexico, foreign evangelists can be seen proselytizing to anyone too slow to escape their eleemosynary grins. 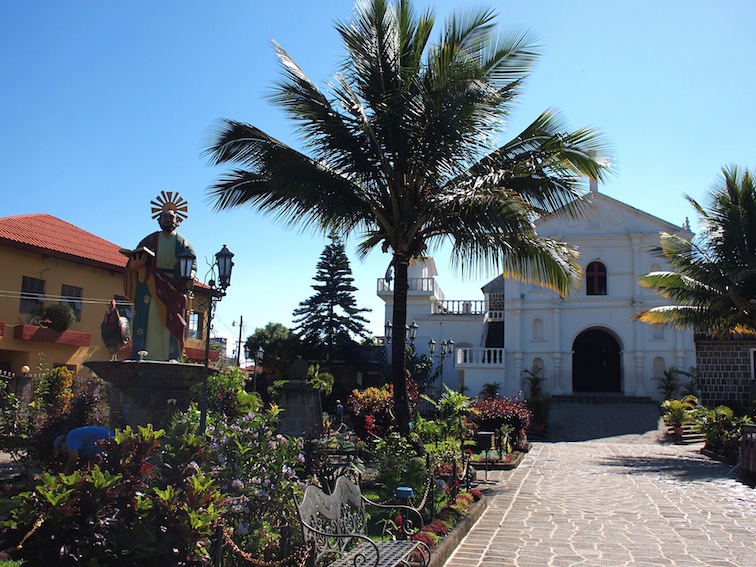 Even if a bit more reachable than the Christian heaven, the San Pedro volcano is nonetheless a formidable ground for hikers and resilient wanderers. A less daunting exercise can be performed by renting a kayak and paddling along the shore. For those unafraid of heights and rickety engines, the town also offers the opportunity to go paragliding amidst a breathtaking scenery. 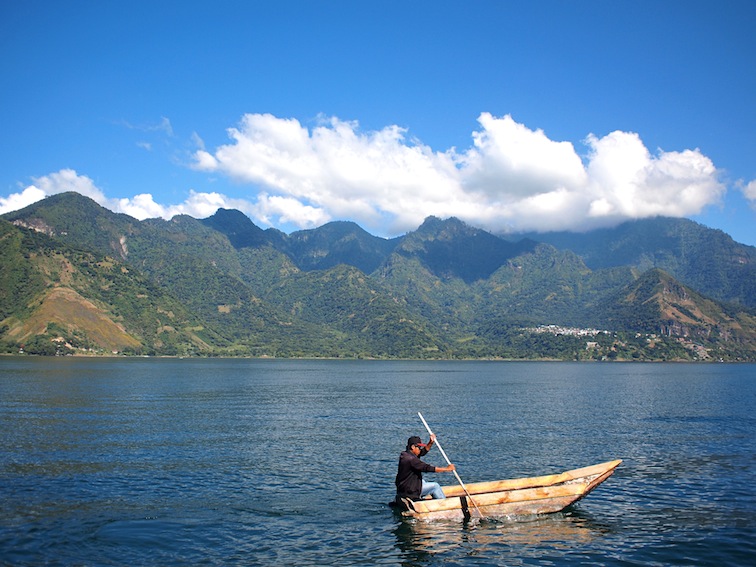 For all its enticing activities and tourist influx, San Pedro La Laguna can still be a charming and relaxing place to spend a few days, weeks or even months. The shimmering waters of Lake Atitlán are a soothing sight at any time of day, and the surrounding lush greenery provides a fresh atmosphere in which to either indulge in hedonistic pleasures or hide away in a secluded haven and count one’s blessings. 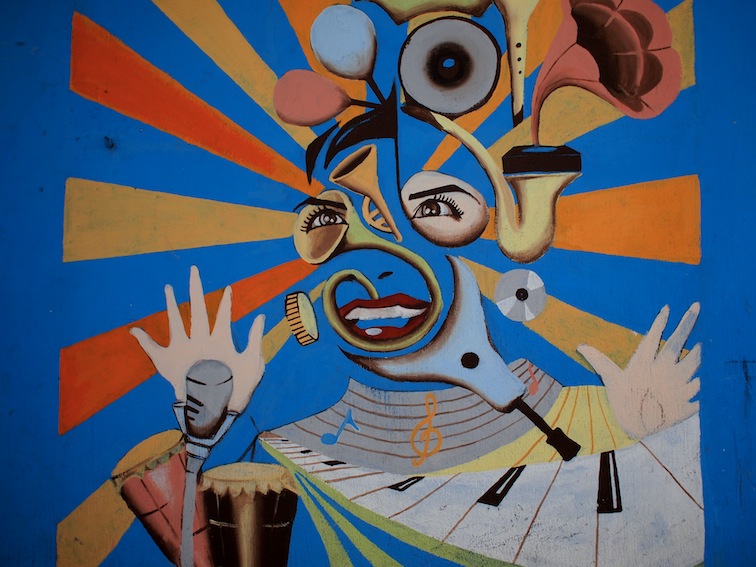