We were furiously bumping along the dirt roads of Yala National Park, on the southeasterly shores of the luscious island of Sri Lanka. A new day had just risen, spreading warmth through our bleary eyes and shades of blue through a magnificent sky. Our stomachs were still grappling with the first meal of the day, which had been eaten in haste due to the impending arrival of a jeep and one as of yet unnamed driver who would take us on our very first safari. When it did, we were promptly escorted to the back of the jeep, which then departed at great velocity into the sweeping wilderness. Understandably excited at the prospect of finally enacting old fantasies of wildlife encounters amidst a landscape reeking of rugged exoticism, we held on tight to whatever protuberance we could find in our rickety vehicle as it sped through inscrutable bush and massive rock. Only after suppressing innumerable tiny vomits and the constant clatter of our teeth did we manage to push our torsos towards the driver’s seat and shout: “Dude, why the rush?”

The answer to our question lied in the behavior of a particularly furtive feline, the Sri Lankan leopard, and in the ridiculous pressure weighed on camera-clad tourists and safari drivers alike by a tourism industry keen on marketing exceptional experiences. Unbeknownst to us, when signing on to do a safari we had also entered a mad race against fellow tourists and early-rising beasts. Monsoon forests, wetlands and wild beaches were landscapes to be appreciated later, once the successful sighting of a leopard was attained, which usually occurred either at dawn or dusk. Judging from our driver’s frantic driving, we were quickly approaching a post-dawn scenario. Alas, we couldn’t care less.

Our travels through Central Sri Lanka had been a panoply of silent stars and exuberant wonder, magical train rides and welcoming people. Yala had appeared almost as an afterthought, something along the lines of “Hey, we’re going south anyway, why not do a safari and check out some elephants? Pass the ginger beer!” Confronted with a sudden fauna competition, we had no choice but to go along for the ride and pretend we had purposefully come to Sri Lanka to spot a leopard.

When the sneaky cat ultimately failed to materialize, our return to the lodge became marred by the most abject failure. Grinning employees who had seen us depart in joyful spirits were now trying to disguise faces contorted by pity. We went by a white board displaying the various safari groups of the day and their leopard sightings, all jotted down in the ecstatic scribblings typical of the immensely successful or the downright insane. Alas, there would be no X in front of the bulging LEOPARD tag for us, no photos to proudly display to an admiring audience, no bragging rights whatsoever – only shame, shame, oh the shame…

Did I mention we saw a few really cool crocodiles? Also, elephants, macaques, water buffaloes and a gazillion birds of all shapes and colors? Also, immeasurable beauty everywhere we looked? Oh, it doesn’t count? Alrighty then…

A couple of years later, we found ourselves facing a similar situation in Tanzania, where we spent a few days roaming through some of the most breathtaking landscapes in our extraordinary world. This time, the marketing folk at the Generic Tourism Board (specifically built to ensure tourists have to compete against something, somewhere at all times) insisted the whole point of the safari was to spot an assortment of big mammals commonly known as the “Big Five”. This designation, first coined by game hunters, refers to five large mammals who have proved difficult to kill on foot (or bicycle): African elephant, Cape buffalo, African lion, black rhinoceros and African leopard.

Sensing an opportunity, tourist guides and safari tour operators began to use the term as a marketing ploy. African wildlife safaris were then transformed into an opportunity to hunt the “Big Five” and shoot them, this time not with powerful guns but with cutting-edge cameras. Although obviously happy with this shift (being of the opinion a fair fight can only be accomplished if both sides have guns), we were nevertheless somewhat apprehensive of our excursion into the vast horizons of the Serengeti and the bottomless hellhole of overachievers on holiday.

Luckily, our Tanzanian driver was an understanding man. Masawe was his name and patience one of his many virtues, which he must have used up by the time we begged him to stop the jeep for the hundredth time in any given day so we could gaze at a zebra. Did I mention we love zebras? We have been fortunate to see plenty of wild animals in their natural habitat, but one of the most striking memories of our travels concerns the first group of zebras we saw casually grazing on the slopes of Ngorongoro crater. To Masawe’s visible astonishment, we spent a ridiculous amount of time jumping up and down like overactive schoolchildren and extolling the many qualities of the graceful zebra. Those stripes! That dark mane! That gangly gait! That charming bonhomie! For the love of all that is adorable, those STRIPES!

In the end, we did manage to catch sight of the “Big Five”, thanks to Masawe’s discerning eye and a good amount of luck. Finally, we could brag about seeing a leopard, even if he was miles away and perched atop a shadowed branch, completely unconcerned by a couple of idiots squinting through binoculars. As a bonus, we saw two black rhinoceros ambling along in the near distance, to our stupefied silence and Masawe’s ebullient disbelief, which became a memory more tender than the actual sighting of the rhinoceros.

But our real prize was Africa itself and the expansive, intimate moments we shared with Masawe and the stunning wildlife around us – big, small, winged, aquatic or earthbound, some a treasured objective, others unsung dwellers of endless plains and volcanic calderas.

Hence, in honor of all the uncelebrated wild animals populating our world, we’ve come up with five specimens which are usually secondary to many travelers’ ambitions, often off the radar, mostly overlooked, easy to spot but undoubtedly cool. In our book, the “Cool Five” are reason enough to go out and hop on a jeep, or at least browse through a National Geographic magazine.

Is it a flamboyant horse? Is it a rather slim cow? Is it a donkey escaped from a 19th century US prison? No, it’s the zebra – African equid, resolutely undomesticated and cool as a black-and-white cucumber. 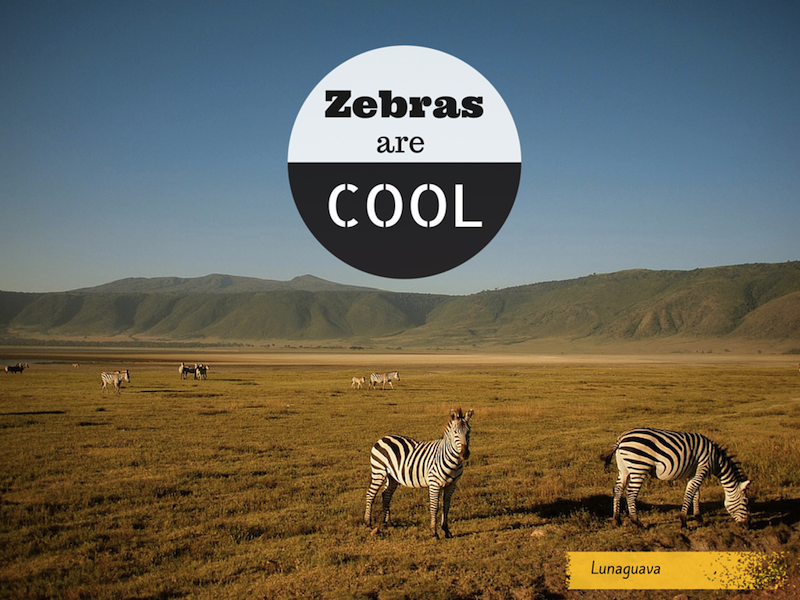 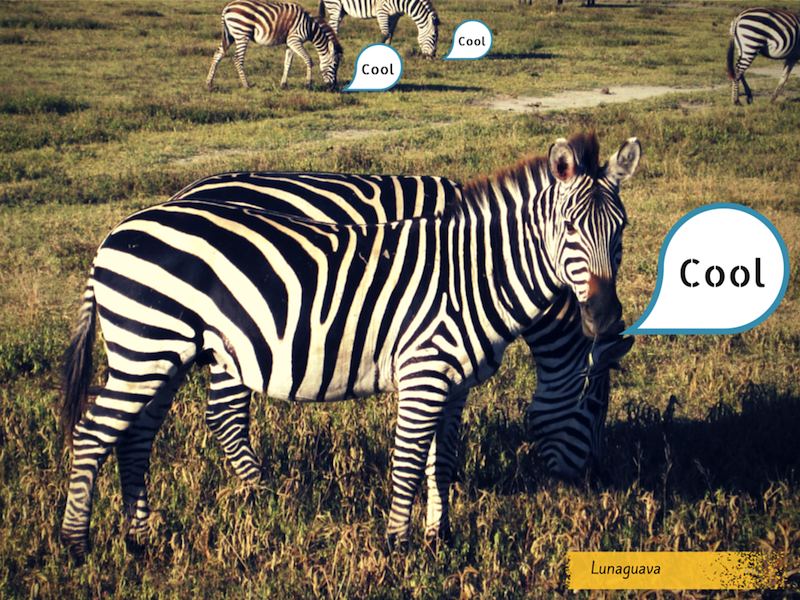 Hyenas have been getting a bad rap since the early days of mankind. Long thought of as mere hysterical scavengers, they are an important part of ancient human folklore, although commonly associated with witchcraft and immorality. Certainly falling into the “so ugly it’s cute” category, hyenas nonetheless retain a certain cool aura, as anyone who has seen them fight off a lion can confirm. They may have a reputation for cowardice, but they’ll do anything to secure their piece of fresh meat. Sure, they may kill a human or two in the process, but then again nobody’s perfect. 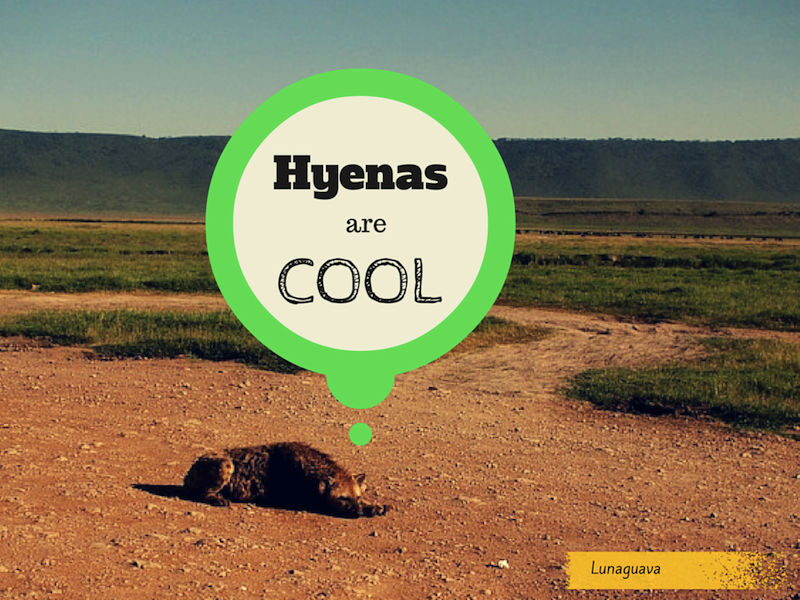 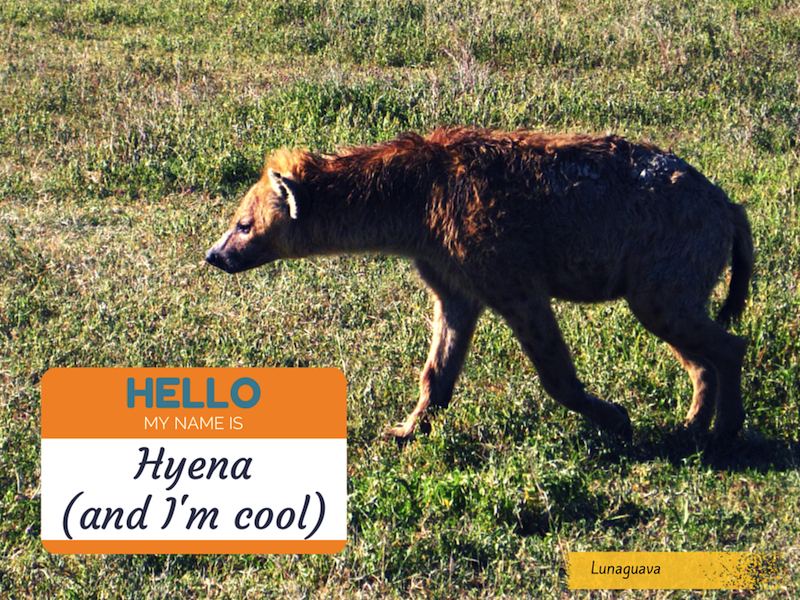 What’s the point of being the tallest living terrestrial animal if people will only focus on your neck and call you “lanky” across the savanna? Such is the fate of the giraffe, whose asymmetrical shape has intrigued young and old since we first learned how to make drawings in caves. However, seeing them nonchalantly snatch acacia leaves in the distance does not fail to bring out the cool factor in them. The world at large points and giggles behind their backs? They don’t care – because they’re cool. 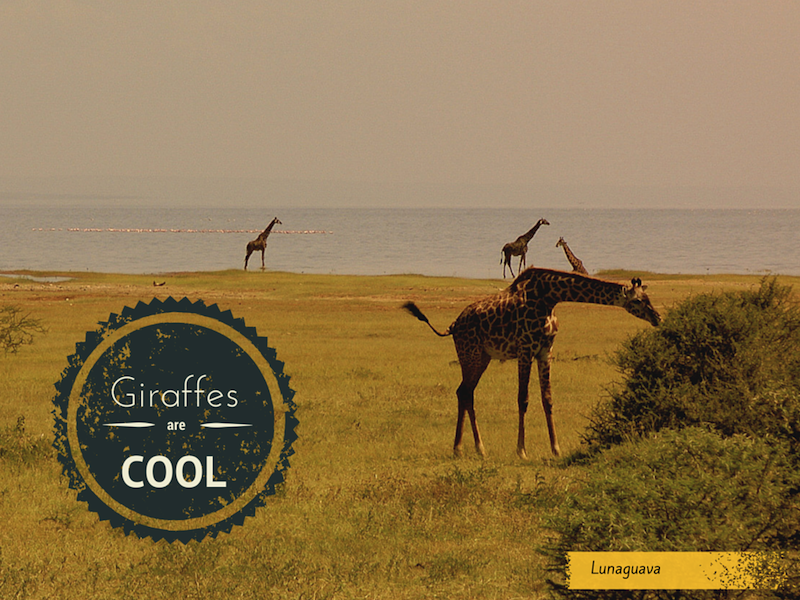 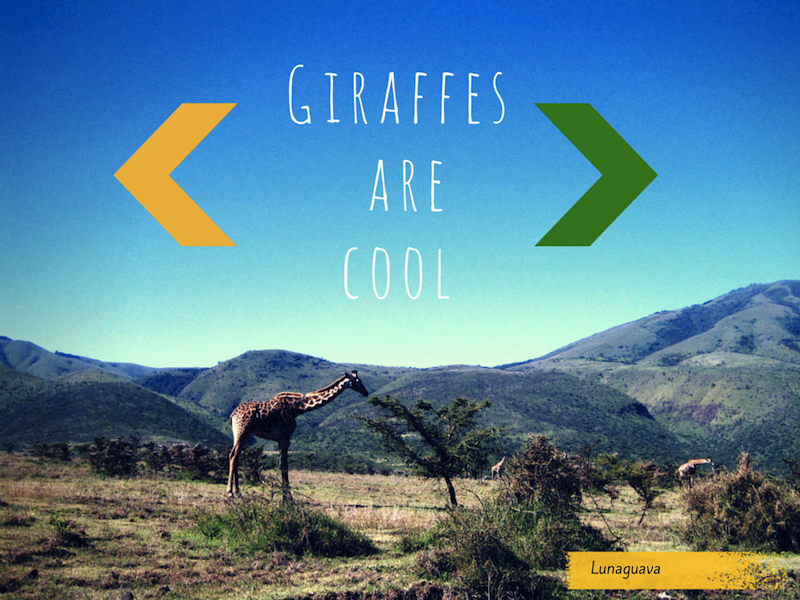 Who’s that little fella rushing through the grassland, tusks glinting in the sun? It’s the warthog, the coolest member of the pig family. Playful, omnivorous and occasionally scruffy, it holds its own against much larger beasts – at least for a few seconds, until it usually sprints away in a cloud of dust. And yes, they may enjoy wallowing in mud, but who doesn’t if given the chance? Hakuna Matata, baby! 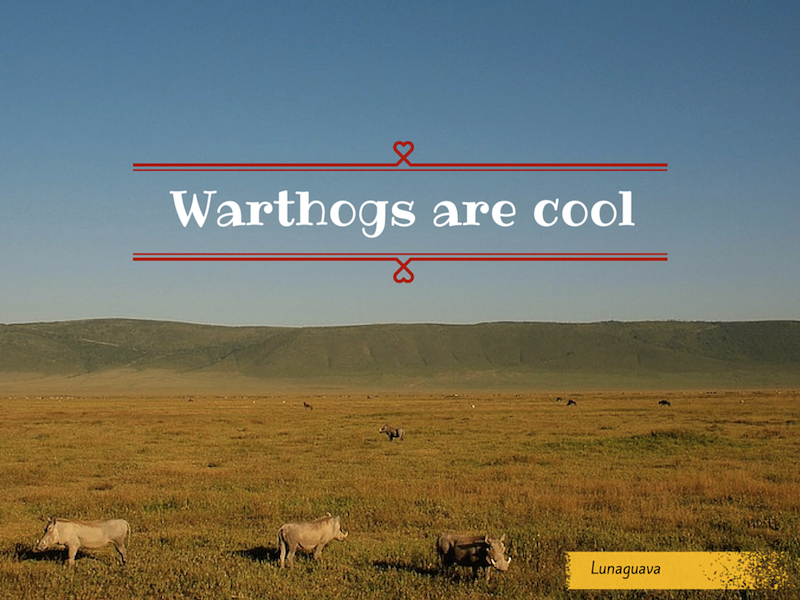 The impressive wildebeest should be on anybody’s cool list. Endowed with a face looking like a nightmarish death mask created by some deranged shaman and responsible for one of the most spectacular animal migrations in the world, the wildebeest is only hindered in its coolness factor by being ridiculously numerous. The name wildebeest is hardly ever uttered in the singular – you spot one, you spot a gazillion. Hence, it’s easy to undervalue them. That is, until you see them running at 80 km/h (50 mph) or protecting their young by skillfully “becoming one with the herd”, like Zen masters with horns. Plus, wildebeest traditionally join zebras while grazing, making for an extremely cool ensemble. 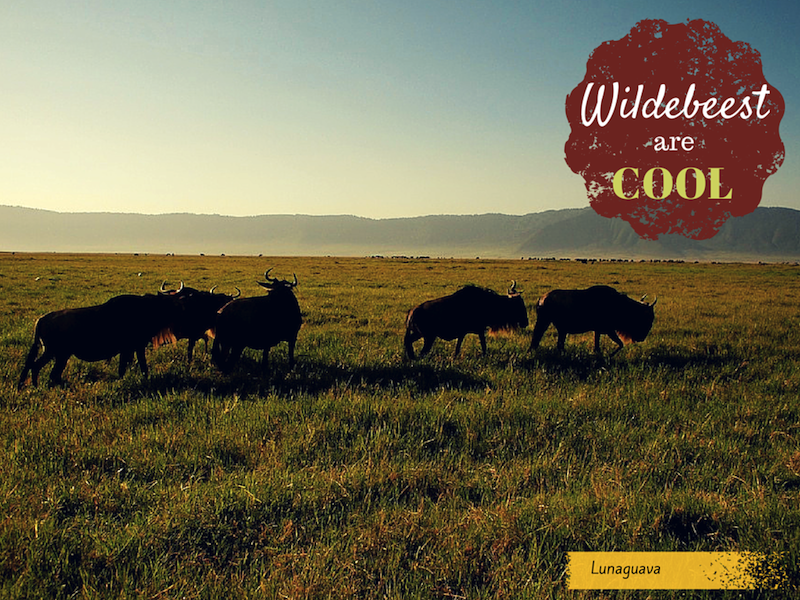 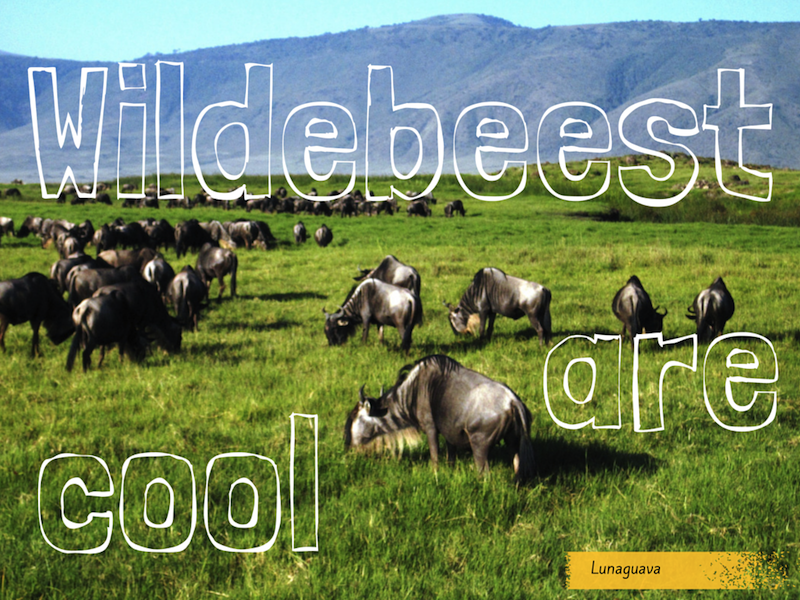