The first day of school.

I remember father’s waist, and a strange woman’s larger waist close by, and how both sounded cordial and good-natured as they exchanged pleasantries about the weather or, more relevantly, me.

Perhaps I should have paid attention to their talk, but my eyes were already elsewhere, looking at the poor children trapped inside dirty windows, my mind wondering why they looked so miserable and why they failed to answer the friendly wave of my left hand. I decided immediately they were rude and uninteresting. That ramshackle football field to the side though… it had potential.

I became alert again as I felt father’s grip loosen, a welcome sign we would be on our way soon enough, him to work and I to play. However, a funny thing happened: father’s grip was replaced by the strange woman’s grip. My right hand was now held by unfamiliar muscles and veins, and I was led into a room smelling strongly of old wood, spilled ink and piss. Turning to the side, I saw father walking briskly toward the car.

I was not in the car. I was in a classroom – a school kid, awash in curls. 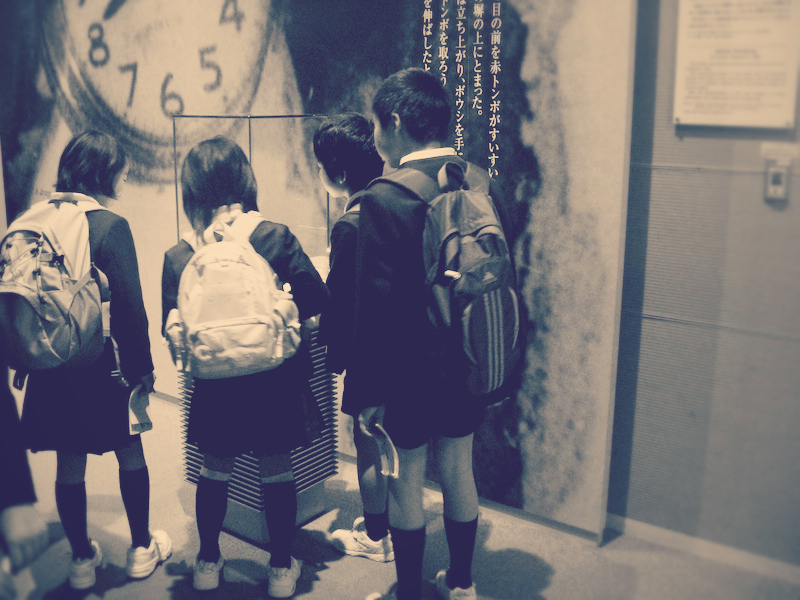 In what was already becoming a constant occurrence in my fledgling life, something essential had happened while I blinked. Yes, I knew I would be starting school at some point, but some warning would have been nice, not to say less traumatic. A new dimension had just opened its portals, and I was being sucked into it like yesterday’s trash.

On that first day I was left too dumbfounded to speak or even move, so I just waited it out, confident rescue would be made available before nighttime. The teacher was kind enough, and did not seem to mind I looked as if I were comatose, or at least not working with a full deck. Lacking the necessary concentration for card games has been one my many disappointments in life, so I admit she wasn’t that far off.

The following day I had completely forgotten about school. Waking up, I inhaled the autumn breeze flowing through the cracks of my bedroom door, ready to tackle yet another mysterious and undoubtedly energetic day. I was halfway to the woods nearby when I heard mother scream my name: “B!”

My head turned, mouth agape, but my feet kept running, the resulting misunderstanding between body parts creating a shallow hole in the moist ground, round and full of my face.

Instructed to immediately get my skinny arms back to school, memories of the previous day surged like the ocean, leaving me to drown. Head down, chin almost touching chest, I went back home to change and reluctantly headed toward school, this time unaided by parental guidance.

At school, madness reigned unrestrained. Triangular remains of shredded notebooks fell like snowflakes, students clambered upon ink-stained desks, shouts were clamored to the ceiling or to whomever was in the vicinity, teachers were nowhere to be seen.

I sat at my desk and waited for the ruckus to subside. Not long after, it did: teacher arrived, class sat down in somewhat orderly fashion, day resumed its natural course. I retreated to my ghostly shell and became oblivious of my surroundings, concentrating on drawing a sheep’s head with my right hand, nervously trying to make it steady.

Suddenly noticing an eerie silence, I raised my head to the teacher, who was looking straight at me with a benign but impatient smile.
“A?” she asked.
I arched an eyebrow and looked around.
“A?” she asked again.

Was this a trick question? My name was not A – it was B, as everyone I knew knew. Yes, it is true I had, like most of my friends, two given names to choose from, but I had always been B, since I could remember – or since I understood words and letters and sounds that sound like B; B being my second given name, the first being a strange, distant, darkened vowel, utterly foreign to me, come to think of it very similar to… wait. Was it A? Was that really my first name, and consequently also me?

As I woke up from my inner puzzlement I muttered a squeaky “Yes?”, to which the teacher replied:
“Present. You’re supposed to say Present.”
“Present”, I said.

She continued the head count. I sat hunched, lost in a maelstrom of uncertainty, the weight of a new identity giving me a crushing headache, the first not directly caused by a physical hit to the cranium.