Although our travel blog began in March 2013, it was only in the last month of August that I began to take it a bit more seriously. As I became more active in the blogosphere and attempted to understand what travel blogging is, I realized I was entering a ridiculously crowded industry, and consequently had a lot of catching up to do.

Hence, I spent a great deal of September staring at my laptop, cowering under the weight of my undertaking. While reading other bloggers’ tips and tricks, one of the ideas which kept being mentioned was the need to find a travel niche and stick with it. Ever the overachiever, I took it a tad too literally and burrowed myself into the tiniest niche I could find, and am now proudly catering to the 5 people in the world who want their travel blogs messy, inarticulate and obsessed with cinema and chocolate. 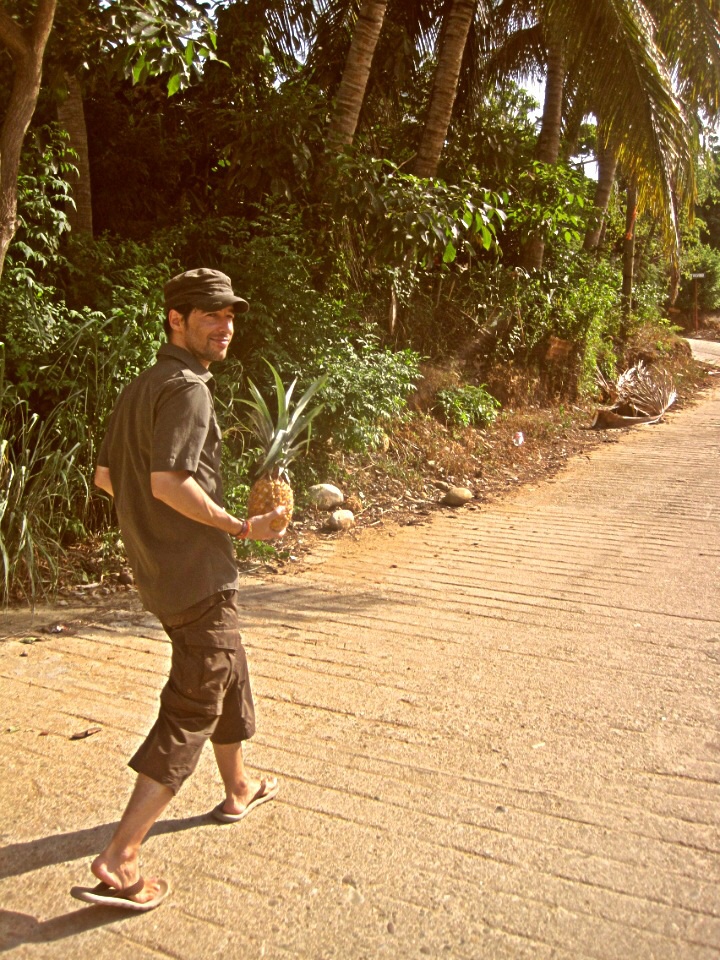 The author is slightly allergic to pineapple, but is too cool to care…

Of the many, many things I did wrong when starting Lunaguava back in March, a couple of issues stand out:

1. Backlinks are links on other pages on the web which link back to Lunaguava. I had no idea this was important, or even that it was an issue – then again, I had done absolutely no research until very recently. Apparently, the Google gods frown upon a website without backlinks, and relegate it to the Google Search Limbo, or anything after Page 2 of Google search.

Quality backlinks are like a stamp of approval by the cool kids of the interwebs. You can write all day and keep creating content like a squirrel on meth, but nobody will find your pathetic drivel until you get quality backlinks from respectable sites. In a nutshell, you’ll only become popular once the Google gods realize you’re hanging out with popular people. Yes, travel blogging is very much like high school.

2. Social Media is a fantastic tool for travel bloggers, helping to spread the word and make connections with readers. Alas, my general attitude towards social media has always hovered between contempt and indifference. As the old poet sang, “Oh, the times they are a-changin'”…

It was only in the past couple of months that I began to properly use Facepoop, Twitter and whatnot in a vain attempt to attract visitors and share whatever silly shenanigans we are up to in our long-term travel debacle.

What I’ve realized is that I should have built a social media presence before I actually made the website available. Currently, the wonderful, precious, freakishly cool people who have subscribed to Lunaguava, liked our page on Facebook and are following us on Twitter are being updated with stories, photos and silliness as soon as I hit “Publish”. However, the first dozen pages I wrote about past travels through Africa or Asia have gone mostly unread, since nobody was aware they were there, moderately ripe for the taking.

So, the question remains: how did we fare now that I’ve started my Sisyphean climb to the travel blogging mountain of doom? Read on and find out!

Subscribers – Not much has changed here, mainly because I haven’t really tried to lure people into putting their emails at the bottom right of our homepage (hint!). This is the most relevant method of assessing a travel blogger’s success, since it means complete strangers trust your website and/or are curious enough about your rants that they are willing to relinquish their emails.

It’s common to offer e-books or other giveaways in exchange for a subscription. I’m sure this works really well, but my epic novel about a cat in search of the perfect sombrero still lies unfinished.

Facepoop – The number of people “liking” our page has increased, but mostly due to friends going above and beyond to put a smile on my face, even if that means threatening to unleash the hounds if their social circle doesn’t click “Like” on Lunaguava.

Disclaimer: We do not condone emotional blackmail, hostage-taking, sensual temptation or flaunting of delicious dark chocolate as a means to elicit “Likes”. Having said that, thank you all for your efforts!

Twitter – I am somewhat proud to say I have learned to stop worrying and love Twitter. The number of followers has slowly risen, mainly due to my constant participation in travel Twitter chats. Yes, I even know what that means now.

I must admit they are enjoyable and sometimes tremendously entertaining, although my feed has now become a collection of ambiguously-worded absurdities. I hereby apologize to any followers who might think I’ve finally gone off the rails when they read such tweets as “Wow, he looks huge!”, “Does it involve paddles?” or “If not, at least try not to do it while meals are being served” taken completely out of context… (Those are all real tweets, by the way)

It’s much easier to engage people on Twitter than on Facepoop. I could probably get the number of followers way up if I also started following a bunch of random strangers, but I prefer to take it slow and grow organically by interacting with fellow travelers who might actually be interested in what I have to say – or at least pretend to, that’s fine too.

Google+ – Since Google owns my ass now, I figured I would take it to the next level and created a couple of Google+ accounts: one for the author (that’s me, FW North, at your service) and another for Lunaguava. The upside is that if searching for Lunaguava on Google, my silly face and my pseudonym (for those who know me – apologies, I know it’s hard to keep up with my endless stream of monikers, but one day I’ll stop) will show up under the website’s name. C’mon, try it!

I’m still on the early stages of understanding Google+, but it seems to be another handy way to publicize my rambling thoughts on travel and chocolate. I’m not sure anyone will care, but Google might. Hence, lovely people or confused stranger reading this, if you have a Google+ account, add FW North to your circles and follow Lunaguava on Google+!

StumbleUpon – I don’t know how this works and every time I try I get a headache. I’ll think about it later – maybe.

Klout – This site uses social media analytics to assess how influential one is in the mad kingdom of the interwebs. Lunaguava has a score of 54 out of 100. I know, ridiculous, right? I read somewhere that it was a good idea to have one, but haven’t invested any time finding out if that’s true or not.

We doubled the visitors and nearly tripled the page views, mainly thanks to social media. People also spent more time on the site, probably due to our inane videos on coffee tours and chocolate workshops. It was a reasonable month, but there’s plenty of room to grow – or come tumbling down in a heap of binary smoke. Time will tell…

The last batch of statistics belongs to two sites who keep track of traffic rank. One day I’ll figure out what those numbers mean, but not right now…

And that’s it, folks! If someone had told me half a year ago that I would be ranting about statistics and social media I would have quoted Rick James’ immortal words “Cocaine is a hell of a drug!” to that silly person… But hey, life has a way of turning around and kicking you in the Balzac. Thanks for dropping by and let me know of any tips or concerns about my mental health in the comment section below.