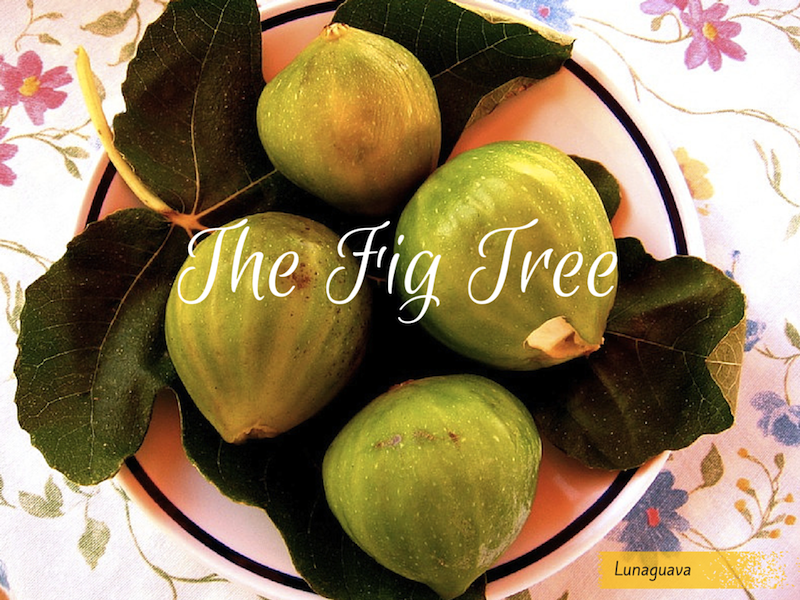 On a late summer morning of 1982, a boy was standing naked under a fig tree – waiting. Under his feet, sun-hidden flecks of grass lay flattened, their greenness tainted by a greased light brown and darkened crimson.

The ground was speckled by these fallen figs, rotting away beneath the chattery wings of neighboring (or merely visiting) birds. Their quick dives into the moist corpses and subsequent retreat into free air amused the boy greatly, and he often came out of the house early to observe the sparkling flutter. The dogs, three striped mongrels used to the quietness of the country, were dozing off within a paw’s reach of each other, and remained unobtrusive – although an ear was occasionally raised sharp, slapping insects. Their chests oscillated in front of the small house, warm.

Inside, stone walls kept the air cool throughout the summer, but wood had begun to be gathered in anticipation of the autumn chill. The open fireplace, occupying almost the entire left side of the living room, was clean but for tiny sticks and lost feathers, evidence of the nests built by impatient swallows, always speeding through the chimney and into the old wood piles just below, smoke-free during the nurturing season.

On top of the red-clothed table nearby, the father’s Turkish ashtray rested alone. Behind a firmly shut door, he slept, unaware of the boy’s eyes lingering on the intersection between the fig tree’s trunk and a low fragile branch. There, an unfinished web held the tired body of a firefly. It lay trapped in the middle-right corner, opposite the tightly secured inverted V of trunk and branch, one thread away from flight and yellow-lit romantic nights. As the spider headed languid towards its prey, taking its time to strengthen the patterned rings of the trap, the boy felt an impulsive shudder in his hands.

At that same instant, a leaf dropped on his shoulder and slid towards the ravenous earth. 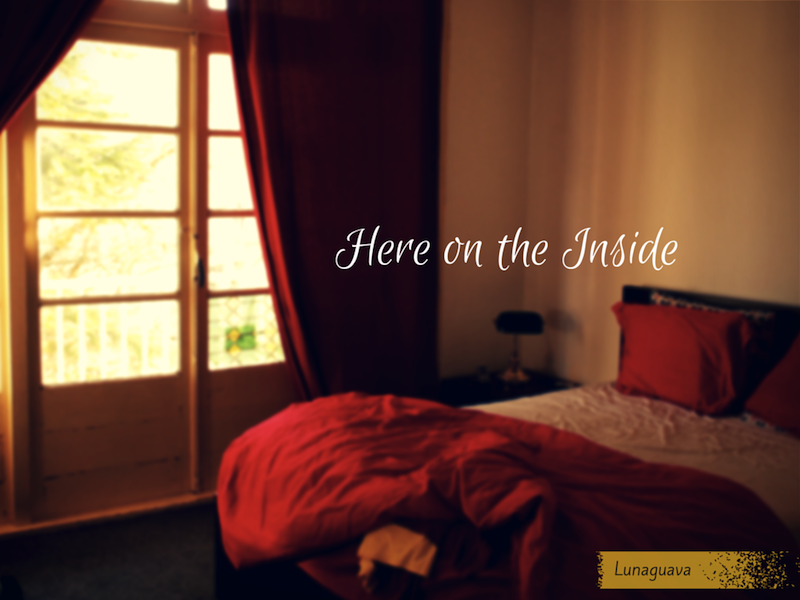 The azure sky grayed rapidly as the first bashful drops of rain thinned the chaotic sound of cars below. The sun had shone regularly for the past few days of September, but some open-mouthed clouds had appeared above, bringing a new color to the open window where a man stood gazing, his small eyes absent-mindedly absorbing the dark orange of the city.

He stood in his air-conditioned room, listening to the rain tapping surfaces outside. A wet window was gently touched by his fingers, which were then laid carelessly on the old black table near his bed.

It was a small bedroom, with only those two pieces of furniture filling the entire space. A great number of various magazines were dispersed on the floor. There were no books or neat autumn flowers.

Pursing his lips, he breathed on the window glass. The outside world blurred instantly. Lifting his hand, he drew a small square with one finger, and slowly erased the mark of his breath using his thumb, sliding back and forth like a windshield wiper.

As he did this, a woman entered the bedroom almost without a sound. She was getting used to arrive and find the man by the window, his back turned against an irregular trail of food and scattered paper. She took her raincoat off with enough noise to make herself noticed.

The man turned his head slowly and looked her straight in the eyes.

She kneeled down and tidied some of the magazines on the floor, then got up abruptly, as if remembering something, and left the bedroom, echoing “Have you been outside today?” through the shadowed corridors of their apartment. 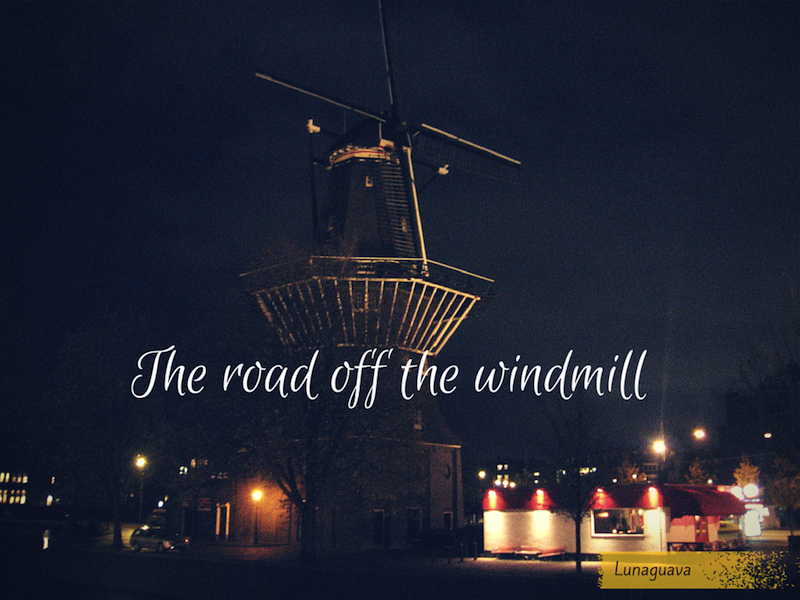 Anthony looked up at the sky. Framed in his sight, faraway lights cut by the quiet darkness locked inside the old windmill’s window. Its age shone upon his shoulders, smooth, like the shadow of an airplane shimmering over the sea. The night air was cold, his bike shuddering as his hands gripped the stiff rubber of the wheel. He was lost.

Getting up on his bike, he circled the pavement before riding off, slowly, towards the surrounding alleys and leaf-splattered streets. Going back and forth, he tried to hint some sort of recognition from the foreign signs: too many consonants, a few letters missing.

“The road off the windmill”, he muttered to himself. Anthony returned to the windmill, halting under its unchanging wheel. Short-breathed, he picked up his cell phone and dialed Cleo’s number. A feminine voice shot through, laughter playing in the background.

“I’m at the windmill. Where is the darned place?”

“I told you, the road off the windmill,” Cleo replied, a slight grin leaving unnoticed through the airwaves.

Anthony smiled as he thought of the evening gathering, voices already ringing across his naked skull. Putting the phone back in his pocket, he turned left, riding swiftly.

The repetitive clang of the bike’s back wheel echoed incessantly, like church bells pulled by a lunatic. Along the path, a disheveled array of trees stood firmly at rest, the shaking of their upper leaves by the nocturnal breeze being the only sign of inner movement. On their right, below, water: stagnant but for the wind, building tiny crests as ice-cream licked by a child.

Hurrying into the dark, Anthony’s face chilled, his teeth clenching for strength. He was all continuous motion, knees flexed, knuckles bare. 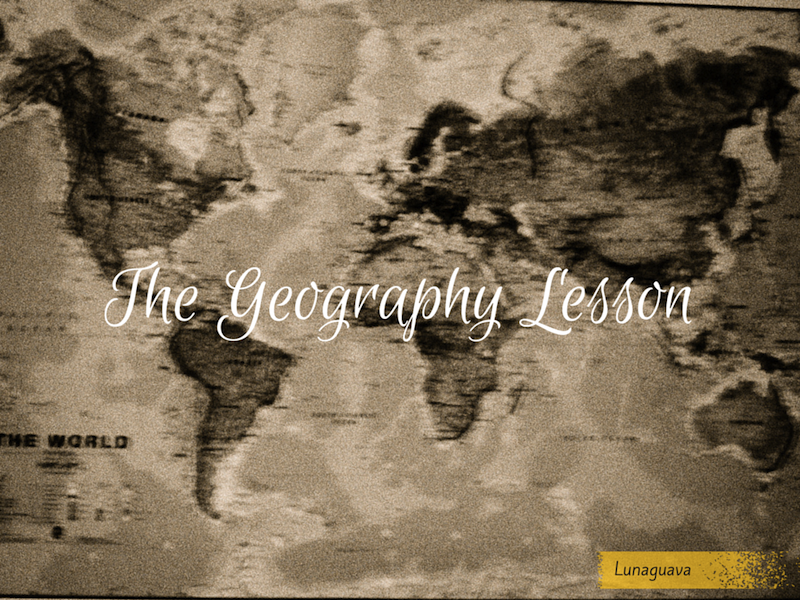 The class had just begun when Samuel walked into the crowded room, his carrot swirls immediately distracting Mrs. Bella’s footsteps towards the blackboard. He mumbled a hurried excuse and promptly sat in his chair, not far enough from the large half-smashed windows which made the morning freeze welcome.

As the teacher admonished him for his recurring lateness, he muffled his ears with his curls and began taking his notebook and pencils out, his trembling hands quickly disappearing under the small table he shared with Paul, who stood numb and oblivious of any motion. The white chill of mid-December was making the otherwise restless swarm of mouths hush with cold, their fingers tucked below their thighs, improvised gloves made of pressing flesh.

The increasing nakedness of the trees outside turned the old school’s surrounding landscape into a disarrayed forest of half-dried specks, as if summer had never cared to visit.

The only shed of warmth came from the bar across the road, apparently only swept by the feet of early-rising farmers or disgruntled regulars in search of alcohol strong enough to prepare them for the toils of the day. For the little boys and little girls, it was a place of legs, forever standing by the counter waiting to be served or to be refilled, its routine very much mirroring the one at school, where a stream of numbers, dates and words was continuously poured into young minds too impatient for the sweetest ring which would announce break and excuse them to go out and stretch their muscles amidst the shrieking holler of freedom.

Today, however, even their fidgety anticipation of the sudden sound of the bell seemed to be quietly domesticated by frost. The small room was silent but for the screech of chalk, occasionally replaced by a quick tap whenever a sentence arrived to its full stop. As the powdery scent emanating from the blackboard slowly merged with the weakening sweat of running youth and ink resting in scribbled wood, Samuel began looking for Pete, who had been gone for more than a month after he got hit by a truck while chasing Sebastian through an intersection.

He unconsciously recalled the day after, a Thursday, when Mrs. Bella had explained the meaning of the word coma, leaving almost everyone wondering how a word so tiny could convey such a large absence. Pete usually sat in the back with Gus, the only one to have known the strange word, but who had chosen to say nothing in spite of Mrs. Bella’s cautious mention of his older brother and the nervous turning of heads in front of him, as if to make sure he still remembered.

Noticing the still empty chair next to Gus, Samuel returned his gaze to his open notebook, upon which a black pencil stood motionless. He fidgeted with it, and pretended to note down the names of the four big rivers displayed on the blackboard. Geography, it was.

The minutes crawled, and the slow sway of Paul’s head as he kept going back and forth between awareness and slumber gained the hypnotic quality of a pendulum. Samuel tried to distract himself from sleepiness by turning to the two attentive figures sitting behind him. Their names were Snow and Nicholas, and they paid him no attention, only briefly acknowledging the expectant glance directed towards them.

After a few moments, still looking at them, Samuel asked “Can I have the eraser?” The boys answered “No” simultaneously, looking over his head and into Mrs. Bella’s clumsy unfolding of maps. Samuel turned to face her, creasing his mud-stained trousers as he did so. Trying to straighten them, he rose from his chair and pushed the fabric to the sides, at which time he felt his left ear being hit by a sharp pain, like white lightning, followed by a burst of heat, starting small but galloping across cartilage until his entire face seemed to seethe with sweat.

The initial shock gave way to confusion, quickly supplanted by anger, only to be replaced by confusion again, the two emotions then fighting for predominance with such violence Samuel felt nauseated; classroom sounds undulated in his mind while his hand gently clutched his earlobe, his eyes blinking repeatedly, until his body swiveled with the urgency of a coming train and he stared at Snow and Nicholas, who returned a look of virtuous innocence.

“I’ll get you for this,” fumed Samuel.

“Samuel!” shouted Mrs. Bella from the blackboard. “Turn around and sit down!”

Samuel sat down. In front of him, resting placid against one stretched elbow, was a small white eraser. Its contours had been chewed off and its surface was still warm to the touch. By his side, Paul had relinquished any loyalty to the waking world.